During the inaugural Milwaukee Museum Week, Jan. 21-27. nearly a dozen and a half area museums are offering special deals, others extended hours, still others special programming. Marquette's Haggerty Museum is offering a rare behind the scenes tour.

Milwaukee is blessed with a wide variety of interesting and engaging museums, some of them a little off the well-traveled path of tourists and even many residents. Call them hidden gems, maybe.

Hidden no more, hopefully, thanks to the inaugural Milwaukee Museum Week, which takes place Jan. 21-27. Nearly a dozen and a half area museums – big and small – are participating. Some are offering special deals, others extended hours, still others special programming.

Thanks to the Greater Milwaukee Foundation, visitors under 18 will get in free to all participating museums (except Milwaukee Art Museum and the Haggerty, which are closed on Monday) on Monday, Jan. 21. At some of them all ages will get free admission. Check the web site for details.

One of the special events is Marquette University’s Haggerty Museum of Art, 1234 W. Tory Hill St., which is offering a rare behind the scenes tour, Tuesday, Jan. 22. Since the noon tour rapidly filled up, a second has been added at 2 p.m. Space is limited, so early registration is required by emailing haggertym@marquette.edu.

"It's unusual for us to do a tour for the public like a behind-the-scenes tour," says Haggert Director and Chief Curator Susan Longhenry. "I wanted to do it during this week because that gives a sense of the entire entity of the art museum, not just what you see on the walls. It's just understanding the entire museum. It's a matter of increasing awareness and the role these museums play in the community for sure."

One of the most unusual roles a museum plays is the one filled by the Haggerty Museum of Art, which opened in 1984 on the Marquette campus. The university had had an art collection for a century, but it was scattered around the buildings. The Haggerty would centralize the collection, allow it to be properly catalogued and maintained and exhibited. 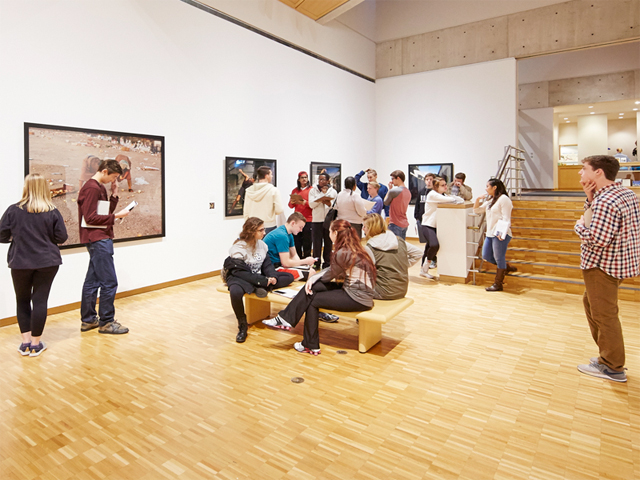 But, interestingly, the Haggerty collection also has another, even more fundamental mission, because Marquette University has neither an art, nor an art history department. Instead, the Haggerty staff collaborates with other departments to bring art into the classrooms and the curriculum.

"Being an academic museum," says Curator for Academic Engagement Lynne Shumow, "we're using the art in very different ways. On any given day, you might see me with an anthropologist or a certain anthropology class or a dentistry class or an accounting class. We're using art primarily to talk about things other than art.

"I bring work up for classes, I take classes into the vaults. I usually have a lot of different types of work that we're using, but we have a very active class schedule here. It's across curriculum."

Shumow and Longhenry take me on a version of the tour that the public will get during Milwaukee Museum Week. We’re joined by Curator of Collections and Exhibitions Emilia Layden, Registrar Michelle Burton and Daniel Herro, who is the head designer and preparator.

With just a couple exceptions, the entire Haggerty team is here and is exciting and, a little astonishing to think that this tight little group is responsible for the exciting annual calendar of exhibitions and events the museum programs each year. 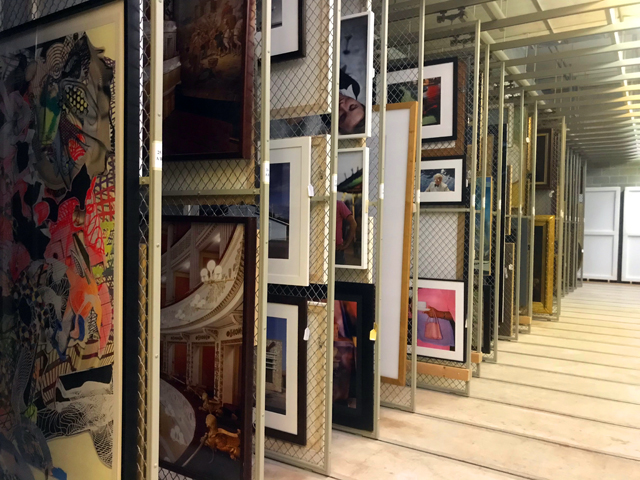 After pointing out the nearly hidden freight elevator entrance that hides behind hanging work in a gallery and allows for large works to move in and out of the tight gallery spaces, we head downstairs, past the loading dock to the large room where paintings are stored on cyclone fence sections that slide in and out on tracks for access. 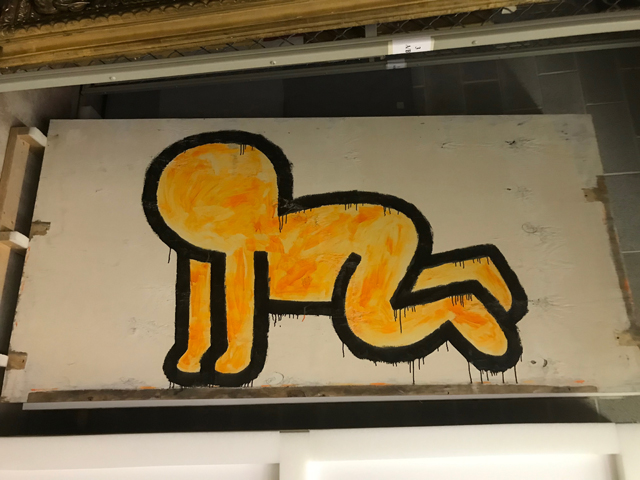 Shumow explains how she brings classes down here to tie works of art into the things they’re learning in, say, philosophy or theology classes. They allow me to see sections of the construction fence painted on site in spring 1983 by the late Keith Haring. 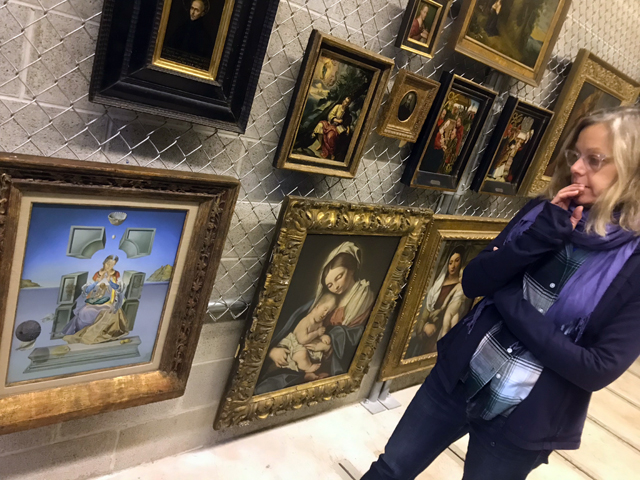 And, they show me an example of a work whose complexion quite literally changed during a cleaning. Take the tour and I bet you’ll hear this remarkable story of the reverse aging of a portrait subject, too. 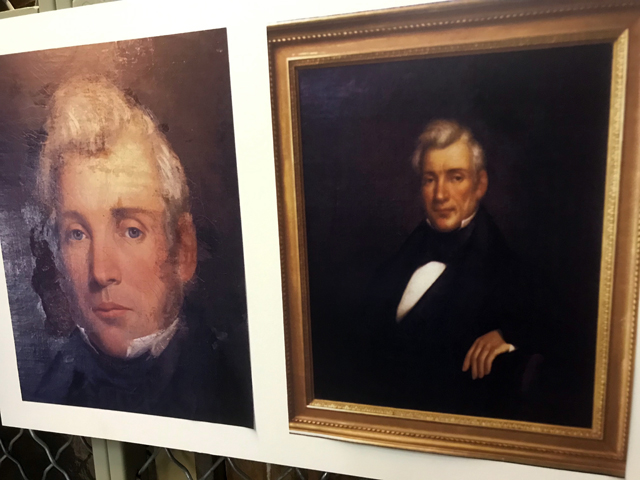 We also get to see the crate in which a work of art lent to the U.S. Capitol to hang in former Congressman Paul Ryan’s office has been returned to the museum. 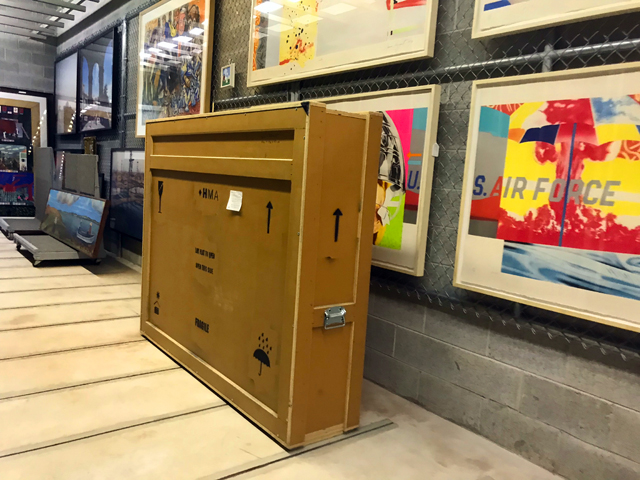 "There is a lot of invisible labor in art museums," says Layden. "I think the tour is an opportunity to shine a light on that."

"You also give people, maybe young people, an idea of the different possibilities that you would have to work in an art museum," adds Longhenry, prompting Layden to add, "maybe it's an arts administration class, or just someone interested in learning more about museum work, (it’s) giving people a window into the pipeline of possible professions." 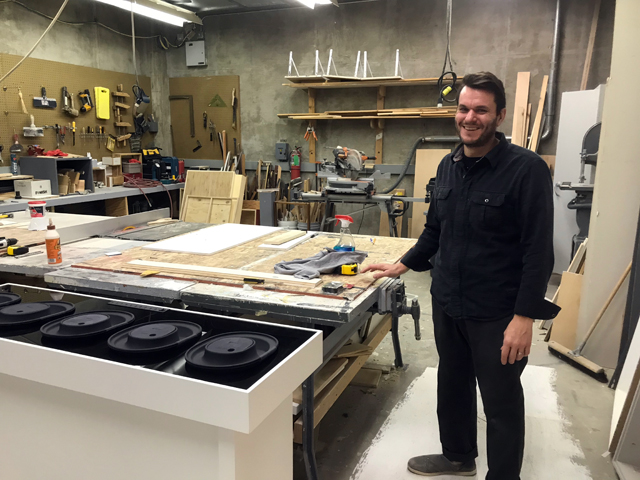 Herro takes us into his realm and shows us where he builds most of the vetrines and other exhibition cases and furniture. In the next room over, Herro frames the art, with frames he builds himself or which the museum has purchased. 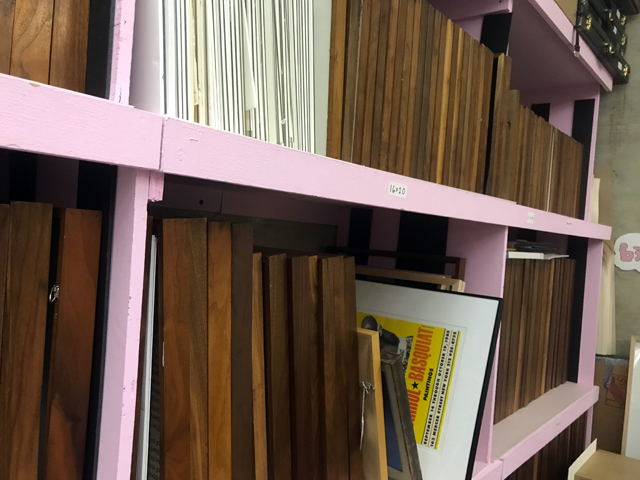 Everything, he points out, gets touched up, re-configured, re-used over and over again. It’s a green business and a tight one economically. But Herro and his equivalents at other museums do such a good job of recycling and re-using that most would never suspect the regeneration is even taking place. 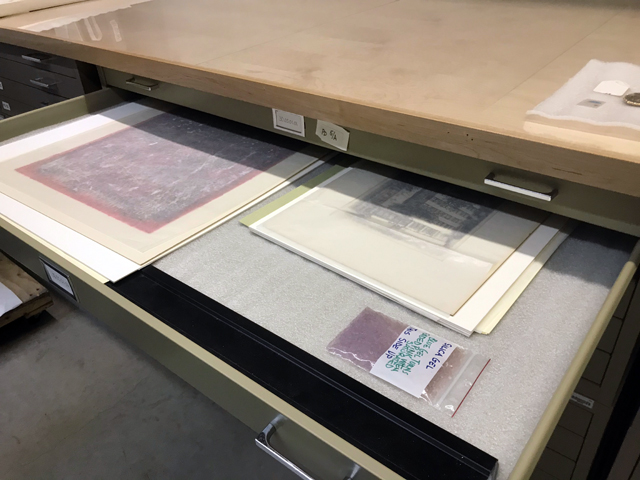 Through a secure door we enter the prints and drawings storage area, which is a relatively small room full of flat files full of art works that require flat storage.

These works are framed only when they are to be displayed. Otherwise, they rest in here, protected by climate control and little bags of the moisture-gobbling silica that you often find in packaging. 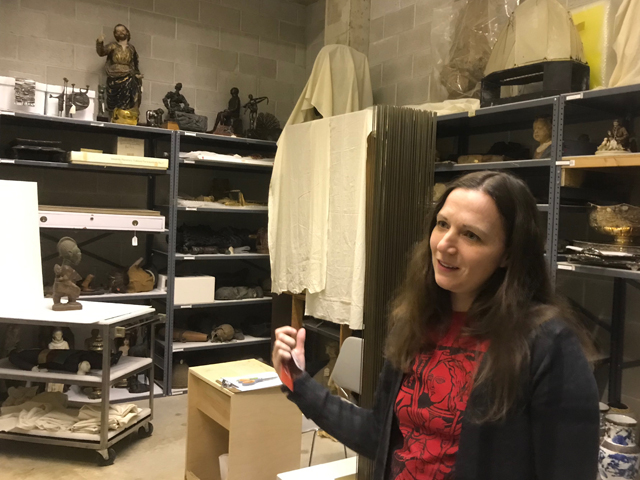 We head across the hall into the sculpture storage area, where there is a beautiful Harry Bertoia sound sculpture. Herro slips on a blue rubber glove with a snap and runs his fingers across the thin vertical rods, creating a cascading, chimy, plangent sound.

It’s hard to believe something this amazing isn’t on view, but space is limited upstairs and the Haggerty staff works hard to rotate objects. In fact, nine out of 10 exhibitions at the museum, they tell me, are created out of the permanent collection.

"There are many decisions that go into what you see on the walls of a museum and a lot of work by a lot of different professional people," says Longhenry.

"What we really want to do is kind of demystify that in a way and really show that what we see on the walls of a museum is really the end result of a very long narrative that sometimes takes two years."