Living Milwaukee soul legend Harvey Scales - who now lives in Atlanta - returned home Sunday evening to help close out Summerfest 50 at the Uline Warehouse Stage. We were there.

Even if you think you don't know Scales' music, I bet you do. He wrote "Disco Lady," which was a smash hit for Johnnie Taylor:

And he wrote "Love-Itis," which was a hit for J. Geils Band:

Scales was also an early member of The Esquires, who later scored a hit with "Get On Up," which Scales sang, a capella, very briefly Sunday evening:

And, if you've never seen Harvey on stage, you've been missing out. He's a dynamic, hard-working performer with a gritty, expressive voice. His shows at The Up & Under Pub on Brady Street in the '80s and '90s were sweaty, soulful affairs unlike anything else in town.

But Sunday's show was short and left me wanting more. 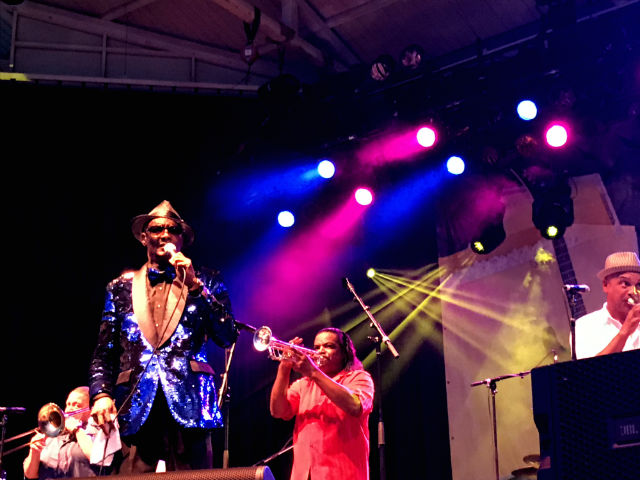 His band The Seven Sounds – which actually had 10 musicians on stage most of the time – hit the stage about five minutes after the 8 a.m. start time and played some funky gems, including The Bar-Kays' "Holy Ghost" or about 15 minutes.

The band, as you'd expect at a Scales show, was top-notch.

At 8:20, Scales himself emerged, resplendent as ever in a blue sparkle sport coat with gold trim to match his hat. After a quick little dance, Scales and the band launched into a lengthy cover of James Brown's "The Payback."

After saying he's heard about issues in Milwaukee – Scales has lived in Atlanta for nearly two decades – he said, "What we need in Milwaukee in 2017 is more love," and kicked off another long cover, this time of Al Green's "Love and Happiness."

By 8:47 p.m., Scales had performed exactly two songs, neither his. But despite the lack of Scales' own songs, the crowd was into it, especially this fan ... 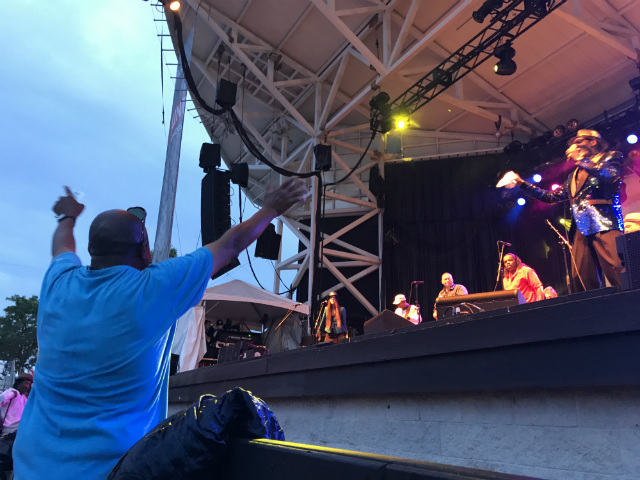 Scales invited veteran singer Richard (Dick) Tate onstage to perform The Temptations' "Papa Was A Rollin' Stone," during which time he left the stage.

Unsurprisingly, Tate turned in a fine performance with his blend of powerful voice and his wit.

With just a few minutes left in his time slot on the north end of the grounds, Scales returned and played "Disco Lady," much to the delight of the crowd.

With a brief message for the crowd – "Milwaukee, I want you to know even though I've lived in Atlanta for about 18 years now, I still love you, yes I do" – Scales was done, making way for The Spinners, who headlined the night on the Uline Warehouse Stage.

There's no faulting Scales' performance or his band's, but I'm a Harvey fan. While I'm happy to hear him play great versions of classic songs, I really wanted to hear more of his music.