If it's a Philly cheesesteak, Reuben or steak and egg burrito you're after, you might just find your bliss at the window of the newly minted Heavenly Cuisine On the Go food truck, which serves up its wares to eager new fans near 16th and Wells Streets.

If it’s a Philly cheesesteak, Reuben or steak and egg burrito you’re after, you might just find your bliss at the window of the newly minted Heavenly Cuisine On the Go food truck which has been serving up its wares to eager new fans near 16th and Wells Streets on the Marquette University campus.

Married since 2013, Tyree and Gabrielle already had their hands full raising Tyree’s two teenage children, Tyrionna and Tyree Jr. But when Tyree’s sister passed away, the couple also took on guardianship for her two children, Josiah and Nevaeh, both of whom were under the age of 10.

"It was a lot going on," Tyree admits. "And I found myself thinking: What can I do to take care of my family? I wanted a job that would make enough money to provide for them, but I also wanted it to be something that I really enjoyed ... something that would be flexible enough that we could deal with the kids’ schedules."

Both he and Gabrielle, a graphic designer and graduate of Marquette’s communications program, were raised among families of entrepreneurs, and the idea of branching out to start their own business seemed appealing.

"Neither one of us has really ever gotten comfortable with working for other people," says Gabrielle. "We both always wanted to really go out on our own. We also liked the idea of building something that could sustain us for years to come, and not just paycheck to paycheck."

A food truck, they both agreed, made sense. 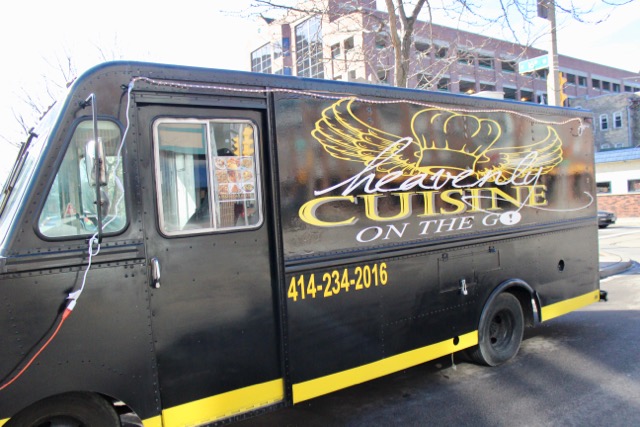 Fleming, who had worked as a barber for much of his life, says he always had a passion for cooking. And it was a desire to share his talents that prompted him to earn his National Restaurant Association, ServSafe Certification and ProStart completion certificates through the ProStart Culinary and Job Readiness Program at HeartLove Place.

"We came up with the name ‘Heavenly Cuisine’ when he was going through the culinary program," notes Gabrielle. "We’re Christians and God is number one in our lives. So heavenly was a word that made sense and has meaning for us. It’s also a good description for our food."

After writing up a business plan, securing an investor and refurbishing a used food truck, Tyree and Gabrielle launched their new business in January. They tried out a number of locations, including the UWM campus, before settling on a regular post at Marquette University.

"We were originally parked on 16th street, and it was campus security that made the suggestion that we move the truck onto Wells Street," says Gabrielle. "We’d been there for maybe two weeks, and they asked us to expand our hours."

In addition to its signature sandwiches, the truck offers a daily board of breakfast and lunch specials priced $3.50 to $9.50. Among their offerings are a number of health-conscious options including oatmeal, egg whites and turkey sausage.

"As a former diabetic, I know how it is to want to eat certain things but needing to eat healthy," says Tyree. "So we do multi-grain pancakes. And I came up with a veggie wrap with black beans, vegetables. And it’s good. People think there’s meat in there, because it tastes so good."

And great taste is exactly what Heavenly Cuisine aims to deliver.

"The secrets are all in the seasoning," says Tyree. "I make my own seasoning blends and sauces ... steak sauce, barbecue sauce. I’m not just flipping burgers. It’s about adding flavor and making food that I would want to eat. I tell people that I cook with love … and they laugh. But it’s true. You have to cook with your heart."

Breakfast is served from 8 am to 10:30 a.m. with lunch most days from 11 a.m. to 3 p.m. and dinner service on Fridays. Heavenly Cuisine also offers catering services.

The food truck has been great entry into the food and restaurant industry, says Tyree, but it’s not the end of their vision for the future.

"I love cooking. And I love sports," says Tyree. "And we both have an eye for design and fashion. So eventually we’d love to own our own sports bar. Our vision is to create a place that’s a bit different … a spot where you feel at home, that serves great food.