Fair warning: Get yourself one of these "Let Hernan Pitch" T-shirts from BreakingT before we buy them all.

There wasn't much joy to take from the Brewers' recent three-game home series against the ransacked Miami Marlins. Sure, the Crew won the final matchup, but they were outscored in total, 25-8 – including a game one bludgeoning in which the Brewers could've scored two touchdowns AND STILL LOST.

There was one positive, however: Hernán Pérez, baseball's most entertaining non-pitcher pitcher.

Sent to the mound in the ninth, the utility player wasn't just the only Brewers pitcher to put up a 1-2-3 inning; he did it with style, busting out Bronson Arroyo's high leg kick, Johnny Cueto's shimmy and your dad's 70 mile-per-hour fastball. It's rare to find smiles in the crowd when you're on the ugly end of a score that looks more like a Bills-Jets game, but that's the miracle Pérez pulled off.

Last night, down 16-0 to the @Marlins in the 9th inning, the @Brewers sent out utility infielder Hernan Perez to pitch. ICYMI, he imitated various pitching styles, had fun, and threw a 1-2-3 inning. He was the only Brewer to not give up a hit last night. pic.twitter.com/aCNQRicqyc

Put this guy in the All-Star Game – and if we can't do that, well, at least put him on a T-shirt. Oh, perfect; the fine people at BreakingT already did, as they released this terrific tee for $28 on its website. 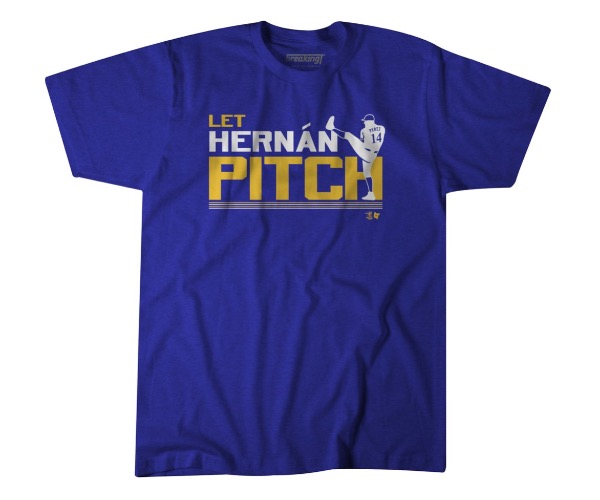 "Let Hernán Pitch" is just one of several nifty Brewers and Bucks shirts on the site, so check them all out. But fair warning: If you want on of these – and you should – get yourself one quickly before I buy them all.