Aliota's Pub & Grill -a decidedly unextraordinary looking pub, located in a strip mall next to a coin laundry - is among the best illustrations for the phrase "Don't judge a book by its cover" that I've ever encountered.

I’d venture a guess there are a good number of people who’ve never been to Aliota’s Pub & Grill, 261 E Hampton Ave.

It’s not because the pub is new; after all, the business has existed in one form or another since 1980 (and in its most recent incarnation since 2012). It’s certainly not because the venue is off the beaten path; it’s on an odd tract of City of Milwaukee land sandwiched between three relatively large neighborhoods (Shorewood, Glendale and Whitefish Bay). In fact, I suspect it’s simply because folks drive past bar without ever really noticing it.

The fact is, Aliota’s – a decidedly unextraordinary looking pub, located in a strip mall next to a coin laundry – is among the best illustrations for the phrase "don’t judge a book by its cover" that I’ve ever encountered. 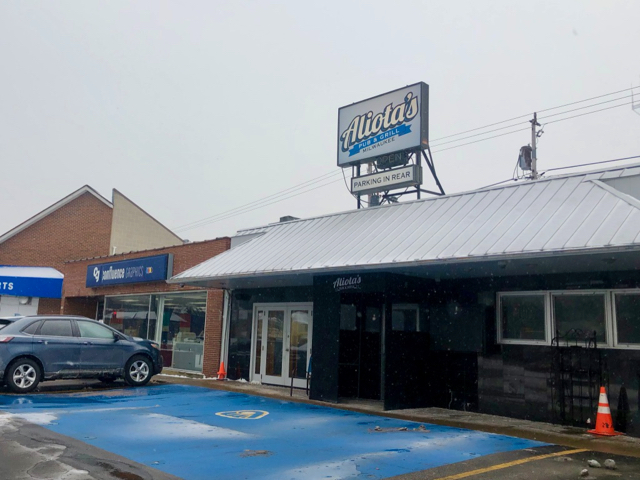 So much of it boils down to the friendly vibe the place exudes.

"We try really hard to welcome everyone through the door as if they’re friends," says David Aliota, who operates the pub with his father John. "We’re not the sort of place where a new person comes through the door, the music stops and everyone stares. We’ve cultivated a really friendly atmosphere, and that’s really helped us to attract a nice mix of regulars and new folks."

That sentiment is echoed by Keyana Gilbertson, a bartender who began working at the pub in 2013, took a break after about a year, but came back last November.

"It was an easy decision to come back and work here," she says. "I live down the street, so this has always been a really comfortable place for me. And, even when I wasn’t working here, I came in here all the time. I know what everyone drinks, and the people here … they’re all my friends." 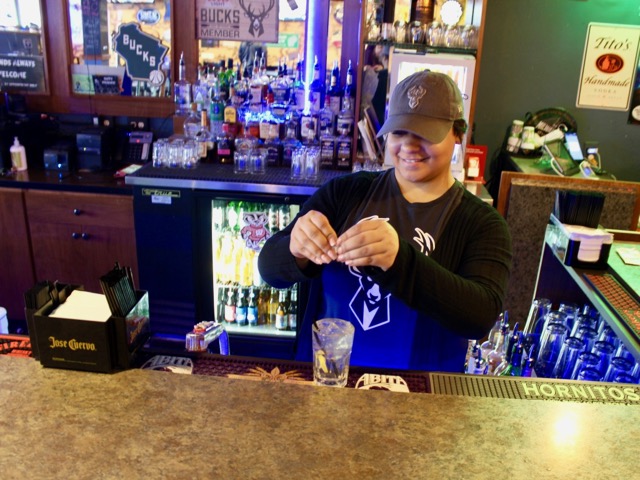 The Aliota’s story begins at the intersection of Plankinton and Wisconsin Avenues, just across the street from the Embassy Suites. It’s now a parking garage connected to The Grand. But in the 1960s and '70s, it was the location of The Big Stein, a tavern operated by Thomas Aliota.

"The City bought the venue from him in the late '70s when they were adding additional parking for the Grand Avenue," Aliota says, noting that his grandfather took the money he’d made and purchased the building on Hampton Avenue, where he opened a restaurant he called Aliota’s Fireside.

"It was really a fine dining restaurant," he says. "There were white tablecloths and a fireplace in the corner. And the menu featured sirloin steaks and a variety of entrees along with Manhattans and classic cocktails."

By the mid-1990s Thomas’s son TJ Aliota, who’d been involved with the business since its inception, took the reins. He changed the name of the venue to TJ Aliota’s and operated it until 2012 when health issues prevented him from being regularly on premise. 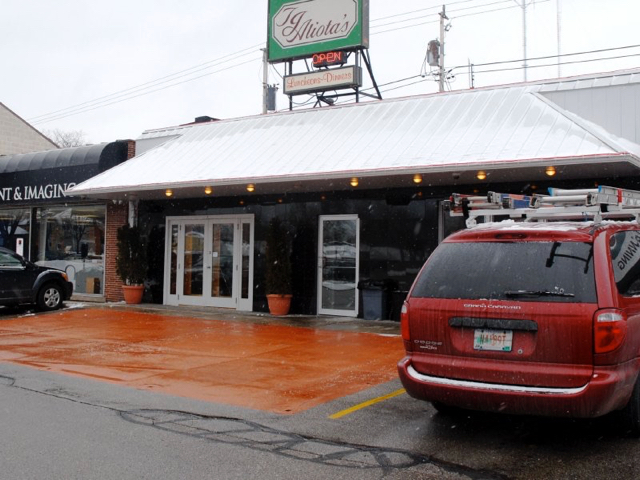 It was then that his brother John and his son David stepped in. John owned and operated a local printing and screening business, JA Limited; however, in the name of family, he assumed operations of the business.

"We came to the place as customers," notes David Aliota, who’d spent years working for his father. "So we thought about what we wanted for the business from that perspective. Thanks to the printing business, we also knew a lot of bar-owners, many of whom had become friends. So we had a lot of people we could go to for advice."

One of the biggest things they decided they wanted, Aliota says, was to create a spot where people could come together over sporting events, enjoy casual pub-style fare and drinks with friends. So they set to work, remodeling, renaming and rebranding the restaurant one more time.

The process, he says, took about nine months. Beginning Jan. 1, 2012, they shut the doors, gutting the interior right down to the studs. They installed numerous televisions to broadcast sporting events, and they reworked the menu to feature scratch-made pub-style fare.

"When we reopened in September, there was some hostility," Aliota admits. "The former restaurant had a crowd that was a lot older, and it was a tough transition for them. But we’d built the new concept for a younger crowd, and it caught on among a new generation of people." 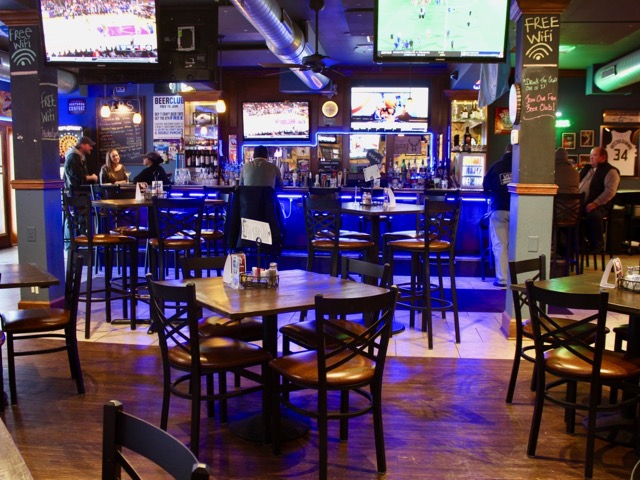 Among the things which attracted that new audience was a robust selection of beer, including 10 taps (most featuring craft brews) and a selection of bottles and cans. Among local offerings, Lakefront's Riverwest Stein takes the cake, though Lagunitas IPA is likely the most popular brew sold.

It’s Milwaukee, so (of course!) beer is a popular option; but that’s fueled by Aliota’s Beer Club, which offers punch card holders a buy seven get one free offer. It gets even better on Wednesday nights when every craft brew is both $1 off and worth two punches. 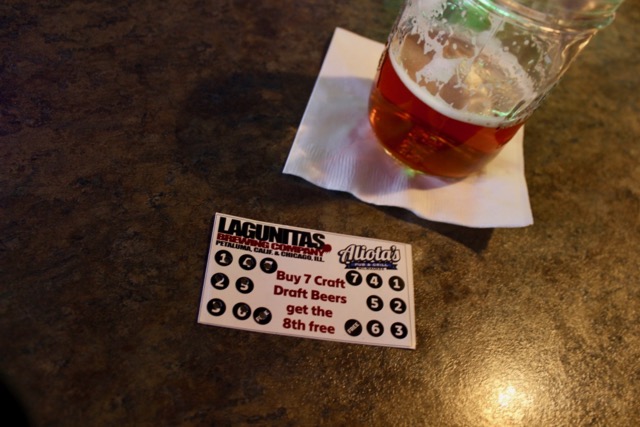 Take a look at the menu at Aliota’s and you’ll find the sort of fare you’d expect at a neighborhood pub: grilled or fried chicken wings, a selection of pub-style burgers, fried cheese curds and a Friday night fish fry complete with fried walleye, perch and housemade potato pancakes.

But it’s the little details that set Aliota’s apart ... things like scratch-made French fries and dressings and sauces are made from scratch, including a "ranch dressing that people go nuts for" and a blue cheese dressing that Gilbertson describes as "crack."

There are oddities like housemade jambalaya, a dish gleaned an early manager who brought in his Southern grandmother’s recipe for the kitchen staff. But guests will also find nods to the Aliota family's Sicilian heritage in items like arancini, zucchini fries, and pasta dishes, along with the housemade pizza that’s available to guests when the kitchen is closed (Monday through Thursday from 2 to 4 p.m. and from 10 p.m. to close). 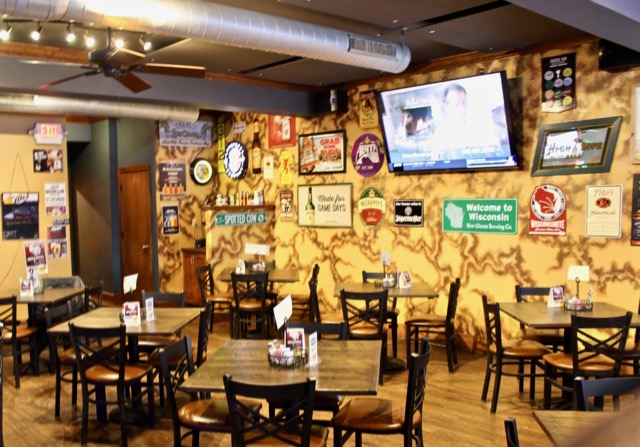 Over the past six years, Aliota’s customer base has both expanded and diversified; eventually, there was a new crop of regulars filing through the doors. Among them was Dan Sherlock, a local who’d spent his career working in grocery management and who’d befriended the Aliota family years prior.

"I’ve been coming here for years," Sherlock says. "And I’ve met so many wonderful people over the years … some are from the neighborhood and some are just visiting from out of state. And this place attracts people from a wide range of ages … it’s pretty amazing." 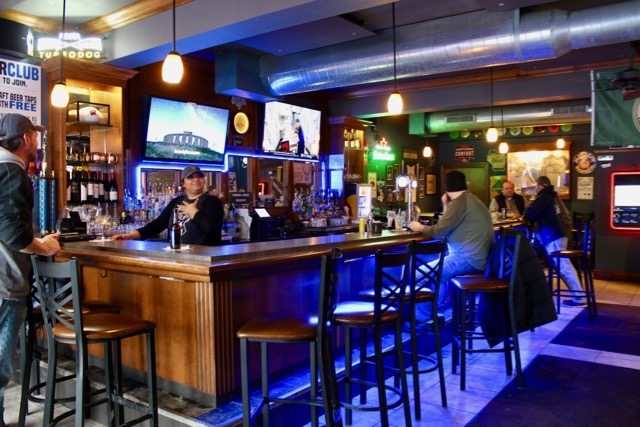 Sitting next to Sherlock at the bar is Justin VanSpeybroeck, an Illinois transplant and tech consultant who says he’s lived in the neighborhood for nearly a decade. He says he happened upon Aliota’s about five years ago.

"I didn’t have high expectations," he says. "It’s a bar in a strip mall. But I came in and they had four or five of my favorite beers on tap. So I kept coming back. One day I was hungry, and I ordered the chicken bacon ranch sandwich. As I’m eating it, I’m thinking ‘wow, this tastes like it’s hand breaded,’ so I asked the waitress about it. And that’s when I learned they make all of their food from scratch.

"From there, I started coming more often and really getting to know the people. It’s blue collar, it’s white collar, it’s executives and small business owners. It’s really like a neighborhood melting pot. It’s laid back, friendly and they’ve got great food and great beer."

It also seems there’s always something new to do at Aliota’s, whether it’s a monthly beer tasting featuring a local brewery, Monday night trivia, a bags tournament or a summer tailgate party on the patio. The bar is also a destination for viewing athletic games; in fact, this year Aliota's is part of the Bucks' Bar Network, so they broadcast every game.

"In the beginning we started off thinking we’d be more of a sports bar," says Aliota, "But as we listened to people and really heard what they wanted, we expanded our vision. Now we serve neighbors who are regulars and people who drive 40 minutes to get here … we’ve become a neighborhood bar to a big neighborhood. And – along the way – we embraced a slogan that grew very naturally out of what we’ve created: ‘Where friends meet.’ It’s simple, but it really describes who we are."