After nearly two decades in the bar and restaurant game, Steve Miick decided it was time to be his own boss. So, at the end of 2018, he bought a place and in January, he opened Dingers Pub in the former Lucky Chance building at 6139 W. Beloit Rd., in West Allis.

After nearly two decades in the bar and restaurant game, Steve Miick decided it was time to be his own boss.

So, at the end of 2018, he bought a place and in January, he opened Dingers Pub in the former Lucky Chance building at 6139 W. Beloit Rd., in West Allis.

Actually, he had decided to make his move a few years back, but then a different opportunity arose and he just couldn’t say no. 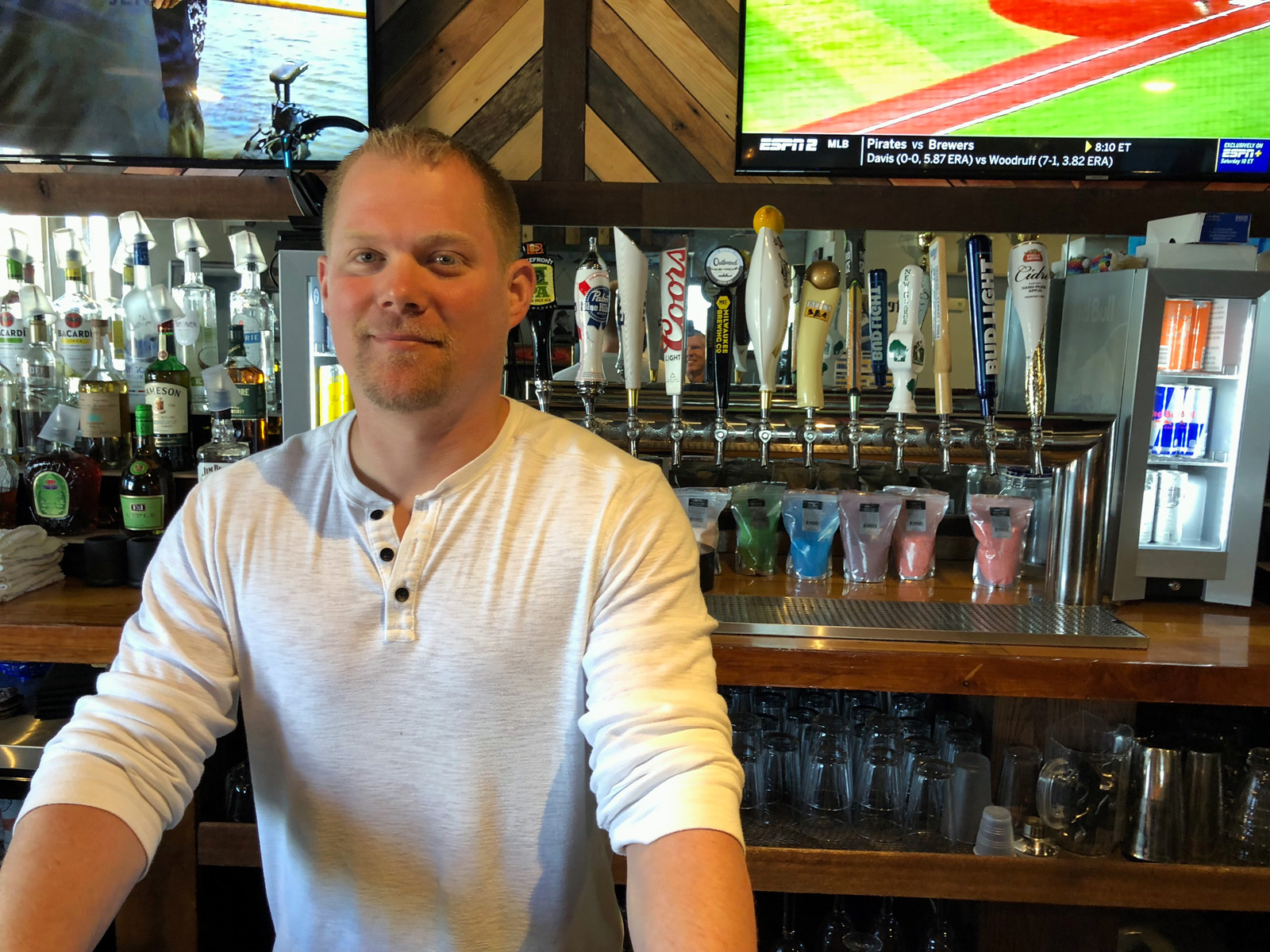 "I've been in the industry for a little over 18 years and I've had situations where I've had a stake in things but this is absolutely my first time doing something on my own like this," says Miick as he readies the bar for opening on a sunny West Allis afternoon.

"I was going to do it a couple of years ago. I was looking at buildings, actually made a few offers."

Then he was offered a job by Wild Planet Hospitality Group, which owns McGillycuddy’s, DiModa Pizza and Red Rock Saloon.

"They said, 'Write down on a piece of paper what you want, and it's yours.' So I did and they did it. (But) I didn't feel like I was learning anything. I felt like I was just kind of sitting still."

And so Miick resumed his search and found the perfect spot.

"I had wanted to do one in West Allis for a while," he says. "I had some buddies that run bars out here and when I would come visit them, I would see the simplicity of it and see they're busy. It's a laid-back lifestyle out here and the people just want a nice friendly bar to hang out in; that's what they enjoy.

"Having been in a downtown setting for 18 years, it's such a big difference. Maybe I'll go to Downtown in the future with something, if the right opportunity were to present itself, but as far as the foreseeable future goes, I see myself in the suburbs. I'm looking at other locations as well for ... another Dingers or something else." 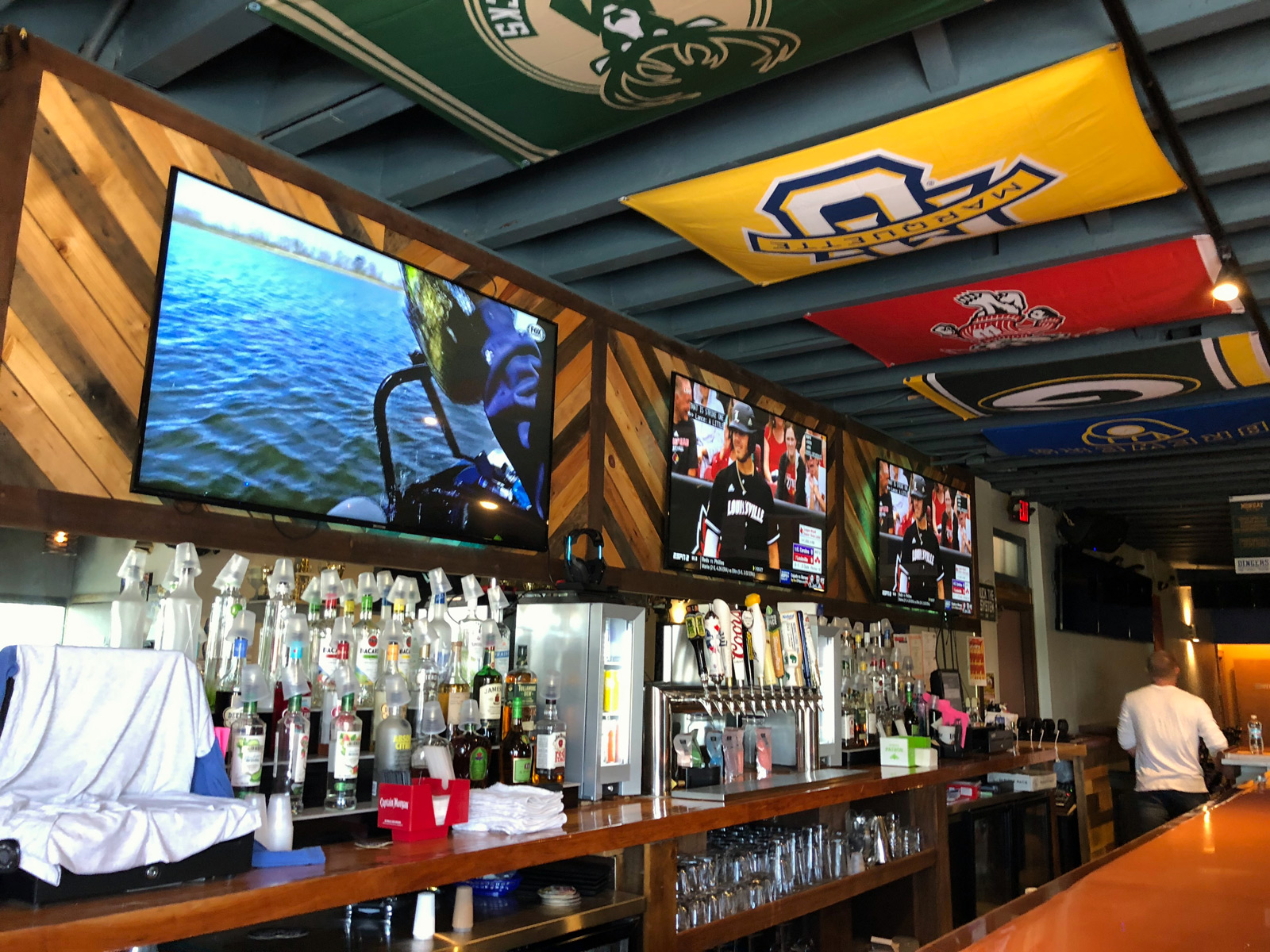 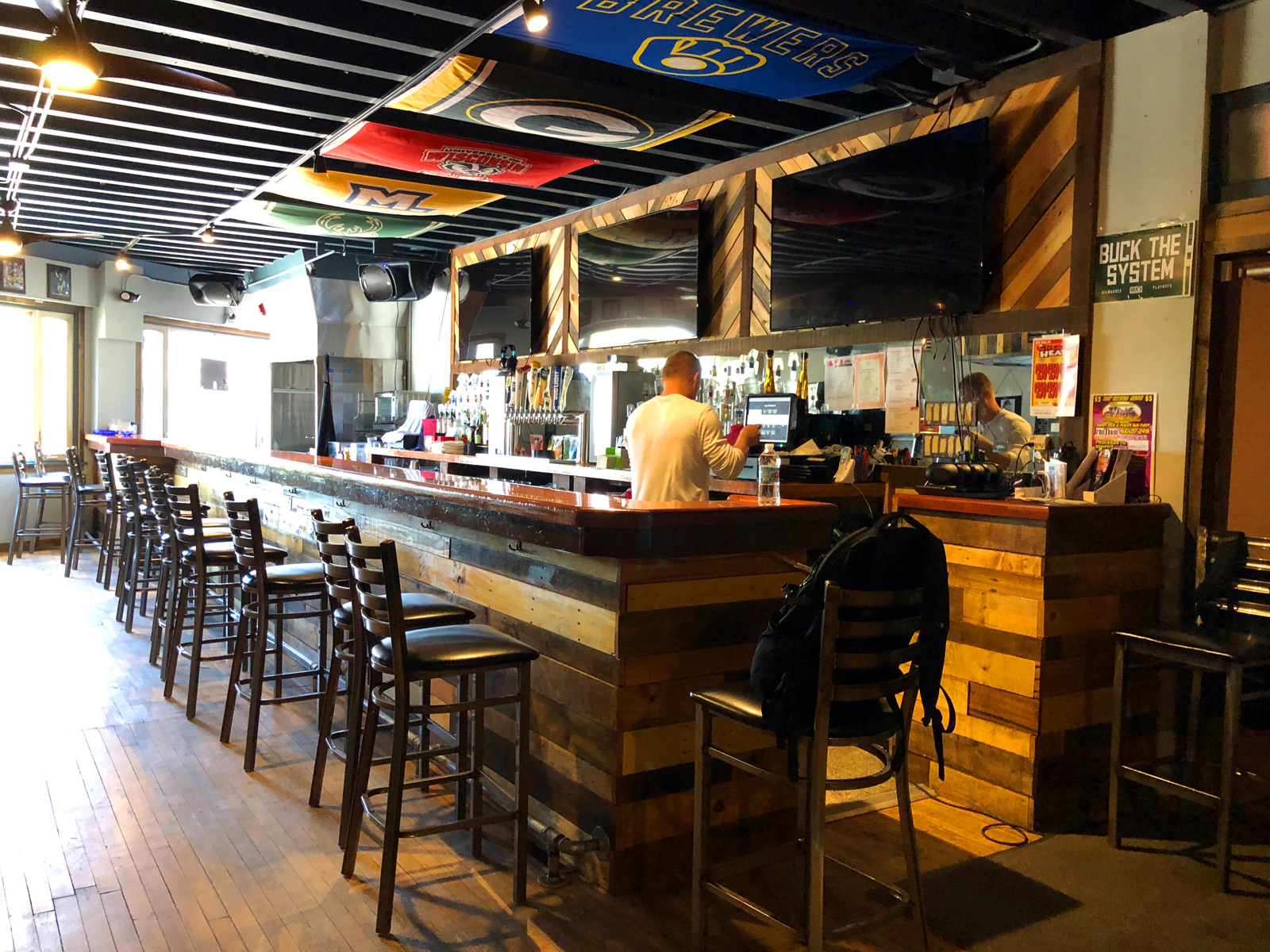 The former Lucky Chance turned out to be a perfect fit, says Miick, as it had a good business and had recently been renovated inside, with salvaged wood accents on the bar, backbar and some walls.

"When I came across this particular building, the people at Lucky Chance were in a good position; they didn't need this business," says Miick. "They had a few good years here and they just wanted to stop on top.

"I came along at the right time and found a building that wasn't drastically overpriced for once ... and they did a really good job remodeling. They had good taste, for sure."

Miick – who is considering building a patio out back – did a little painting, added more TVs, shrunk the stage – which had hosted live music for many years – and built a DJ booth atop what remained, trading a dance music focus for a live music focus, which, he says, caused some regulars to balk.

"I'm not a live music person," Miick says. "I've run two different live music venues; it's just not for me. In the beginning everyone was saying, ‘You'll never last,’ but my response was if the live music worked, there wouldn't have been failed live music venues here before.

"They obviously were upset that there wasn't going to be live music and rightfully so, I understand that." 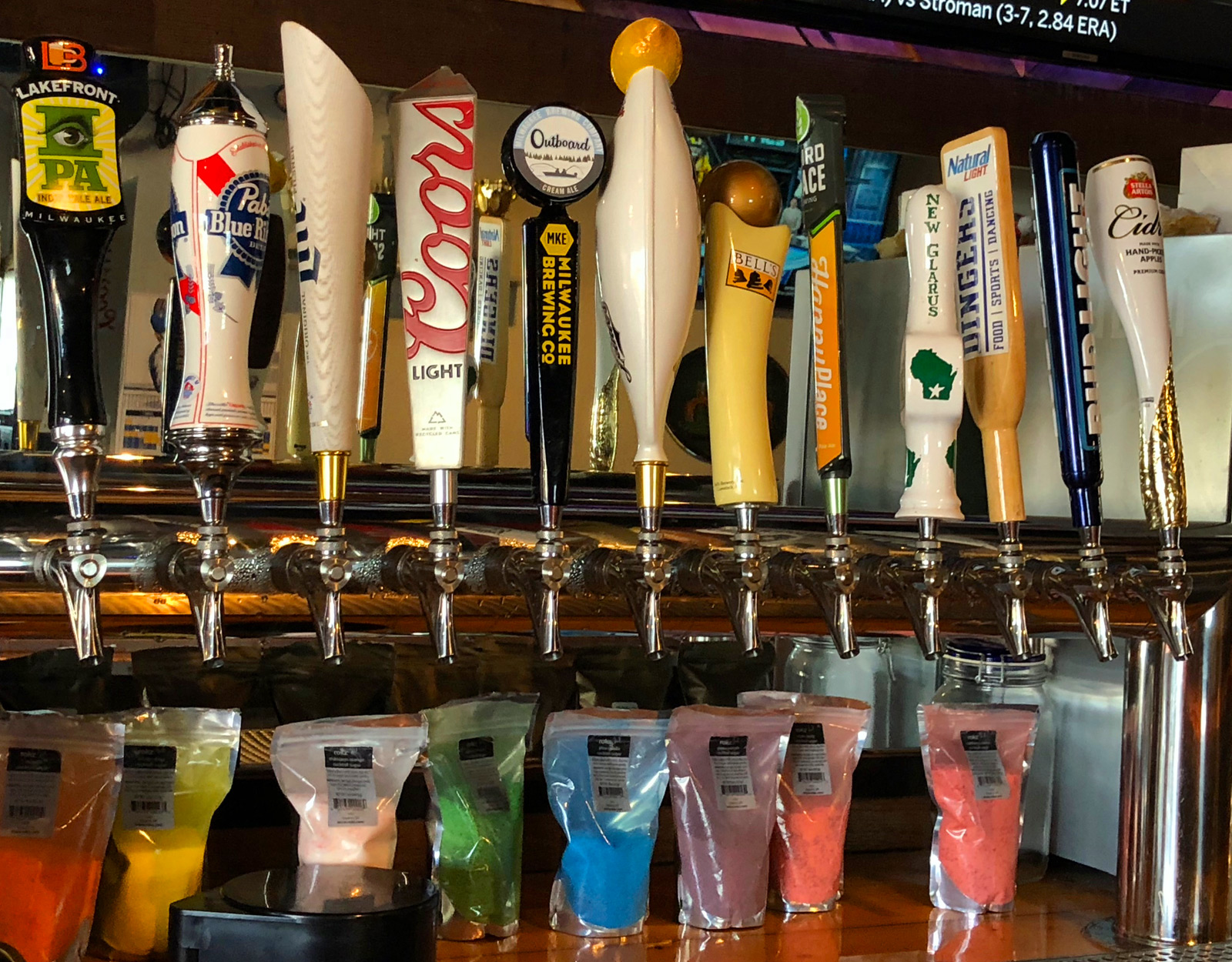 Instead, Miick has turned his focus not only to sports – the TVs and decor are decidedly sports-heavy – but also to food, with which he has a lot of experience. Miick’s first job was in the kitchen at Heinemann’s in Wauwatosa.

To help with the menu, he turned to a dining expert – and friend – for advice.

"Brian Ward is a buddy of mine and I mean my favorite restaurant on earth is Ward’s House of Prime," says Miick. "He gave me some advice on what direction to go, what not to do: don't do a big extravagant menu, don't try to do too many things, focus on the core things and do them very well." 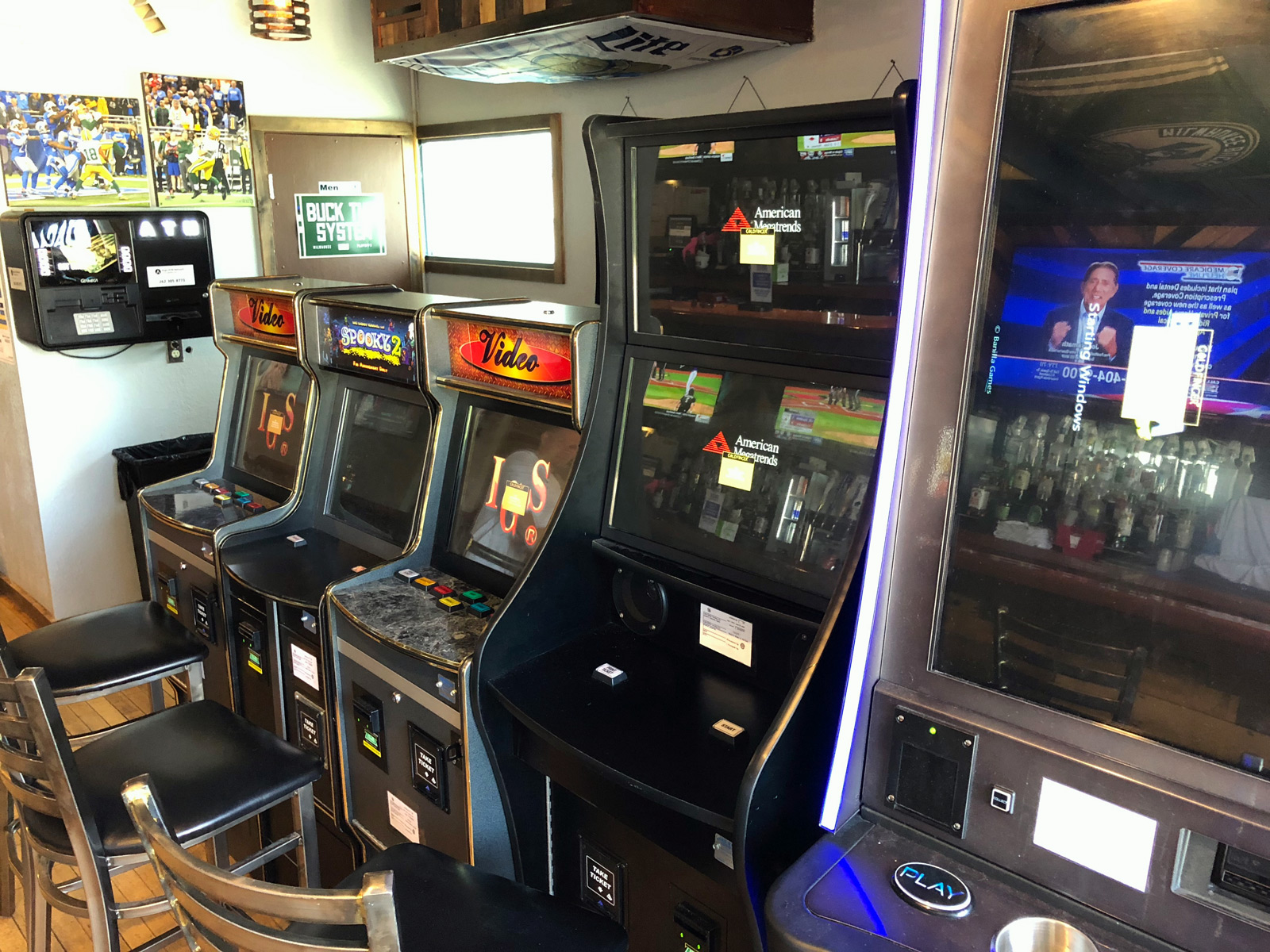 The core things for Dingers are a small but solid selection of apps, like mozzarella sticks, cheese curds, onion rings, mac ‘n’ cheese bites and fried green beans with spicy ranch; as well as made-to-order (not frozen) pizzas; a range of burgers; and wings with a variety of sauces, including barbecue, Buffalo, spicy barbecue, extra hot and the bar’s signature Hell’s Honey.

"Hell's Honey is a combination of a hot sauce that I found in Vegas two years ago at the Bar and Nightclub Convention and Wisconsin honey," he says. "I'm a big hot sauce person, it's the best hot sauce I've ever had in my life, but it's habanero-based. It's crazy good; really spicy."

Miick says the heat can be a little much for folks who aren’t capsaicin addicts like him, so he’s planning to add an option to the menu that allows diners to control the heat of the Hell’s Honey. 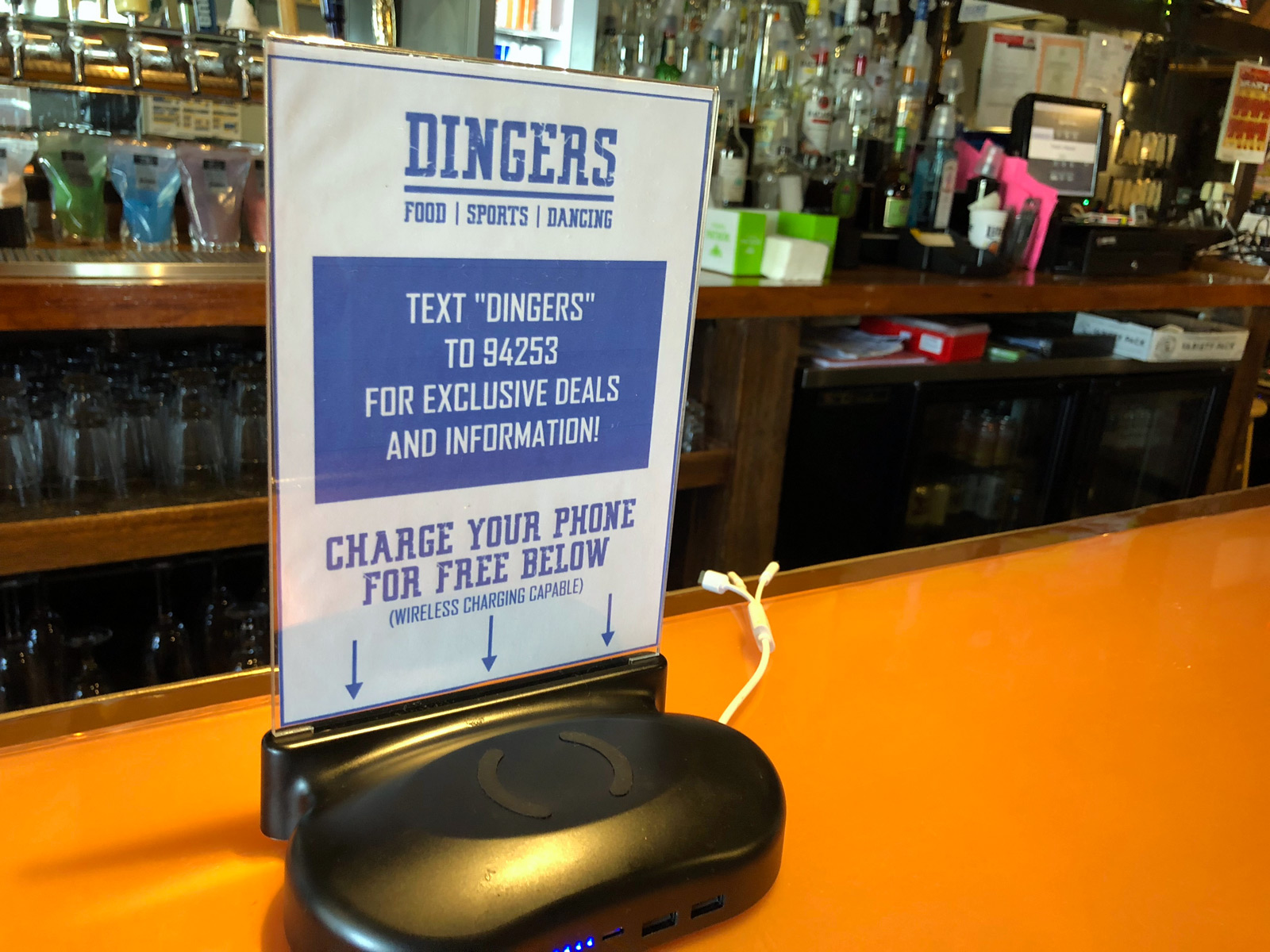 "We can change the different levels of spice," he says, warning that, "it is going to change the flavor because the only way to do that really is to add or subtract honey. So you're either going to get a little more sweet or a little less sweet, but you're still going to have the base of the Hell's Honey."

Miick plans on altering the menu a bit in coming days. In addition to tinkering a few wing sauces and serving a heftier wing, he’s also planning to add a weekend brunch and launching a long list of creative mimosas that will be served in glassware of impressive dimensions. 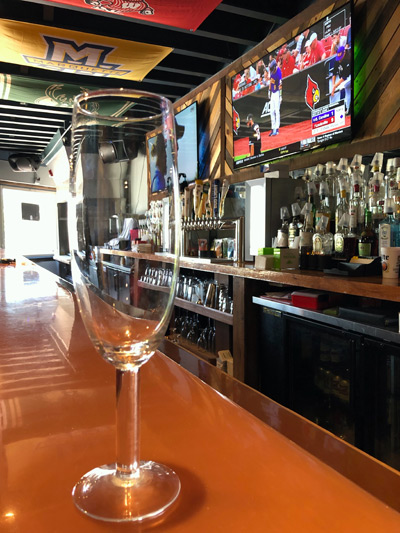 "I think we can fit a whole Champagne glass in there," he jokes, "but we fill it half with Champagne and then depending on the different recipes sometimes they have liquor in them along with other mixers, sometimes it's just mixers. We have different flavored sugar rimmers that we put on there to add a different contrast. It just adds to the uniqueness, and makes it look good, too."

Dingers has a happy hour that runs weekdays from 3 to 7 p.m. and offers $2 domestic taps and single rail mixers, plus a wide range of daily specials, including $1 beer bongs on Mondays, $2 tequila shots on Tuesdays, wings specials on Wednesdays and Fridays and more.

So, how have the early days been at Dingers? 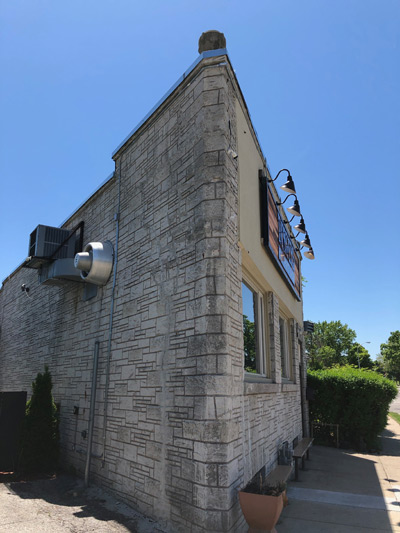 "We've almost done five months, which I can't believe," says Miick. "We're farther ahead than I expected to be and I've been moving really slow as far as rolling certain things out because I want to do it right.

"For the first couple of months we didn't have our kitchen open because the No. 1 thing you can screw up your reputation on is food, if you do it wrong, and I wanted to make sure we do it right. We're certainly not perfect, but I think we're doing a good job. I have a really good team around me putting out some really good food.

"The goal was to be a bar with some good food, but people are starting to come here for the food, which is awesome. It's a very welcome surprise."