Some bars celebrate the holidays with festive drinks, twinkling lights and festive decor. Still others are the sort of places where the warmth and spirit of the holiday season can be found all year long. Among those places is Ernie's Wine Bar in Cedarburg.

For the month of December, OnMilwaukee will shake up the popular Hidden Gem series by showcasing bars and restaurants that literally put the sparkle in the holidays with extravagant decorations. This series is brought to you in partnership with Miller Brewing Company. Merry Miller Time to all!

Some bars celebrate the holidays with festive drinks, twinkling lights and festive decor. Still others are the sort of places where the warmth and spirit of the holiday season can be found all year long.

Among those places is Ernie’s Wine Bar, N49 W5471 Portland Rd., a local gathering place tucked back on a rural road just to the east of bustling Washington Avenue in Cedarburg. 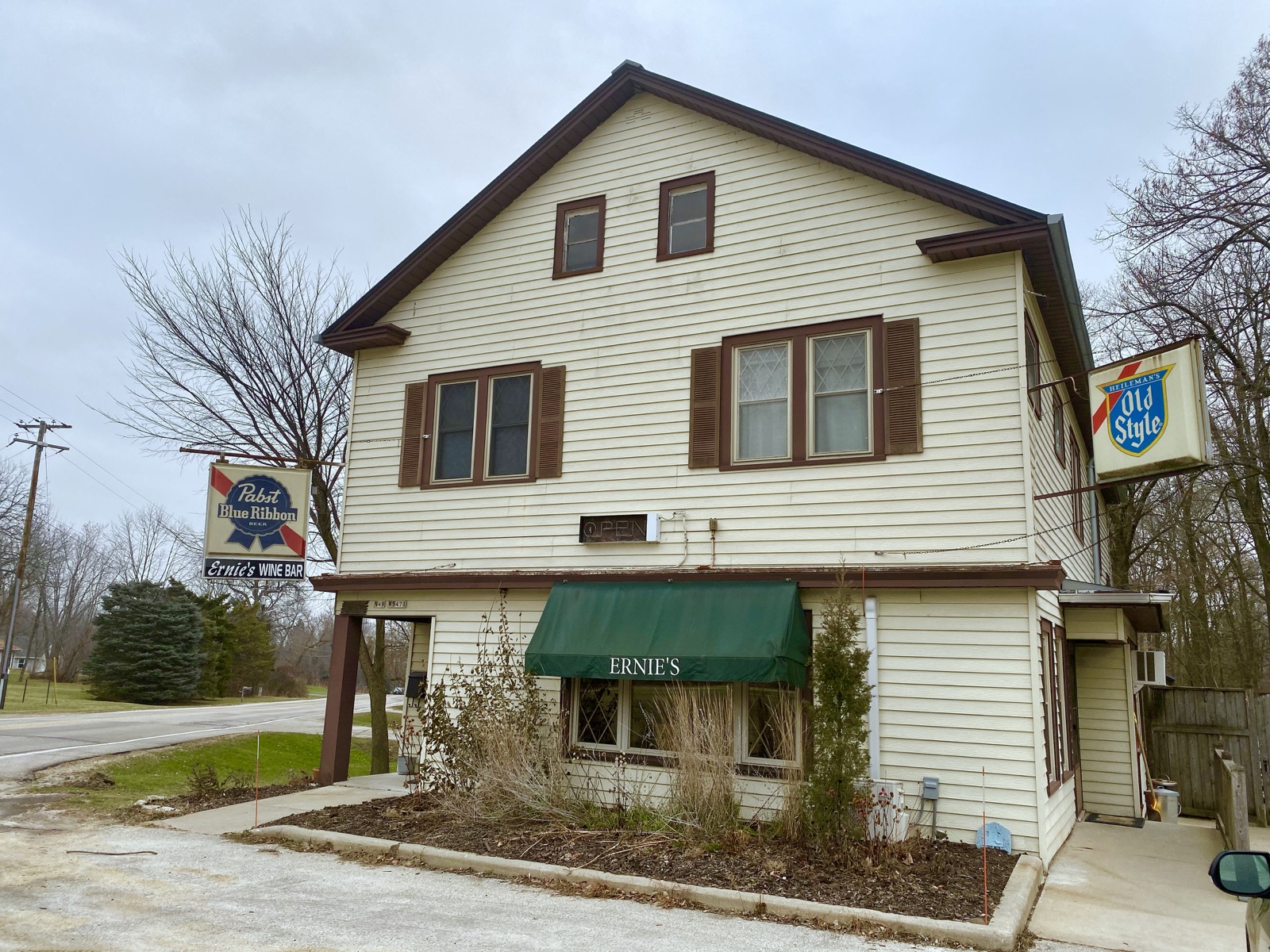 The look of the building, which dates back to the 1850s, reveals very little about the atmosphere inside. In fact, to most, it likely appears as just another bar... and certainly not a wine bar.

But if you walk into Ernie’s on any given night, and you’ll be greeted by a warm, intimate setting complete with a 1920s vintage factory made Brunswick bar, the back of which showcases a large 100-year-old mirror that’s among the largest in the state. 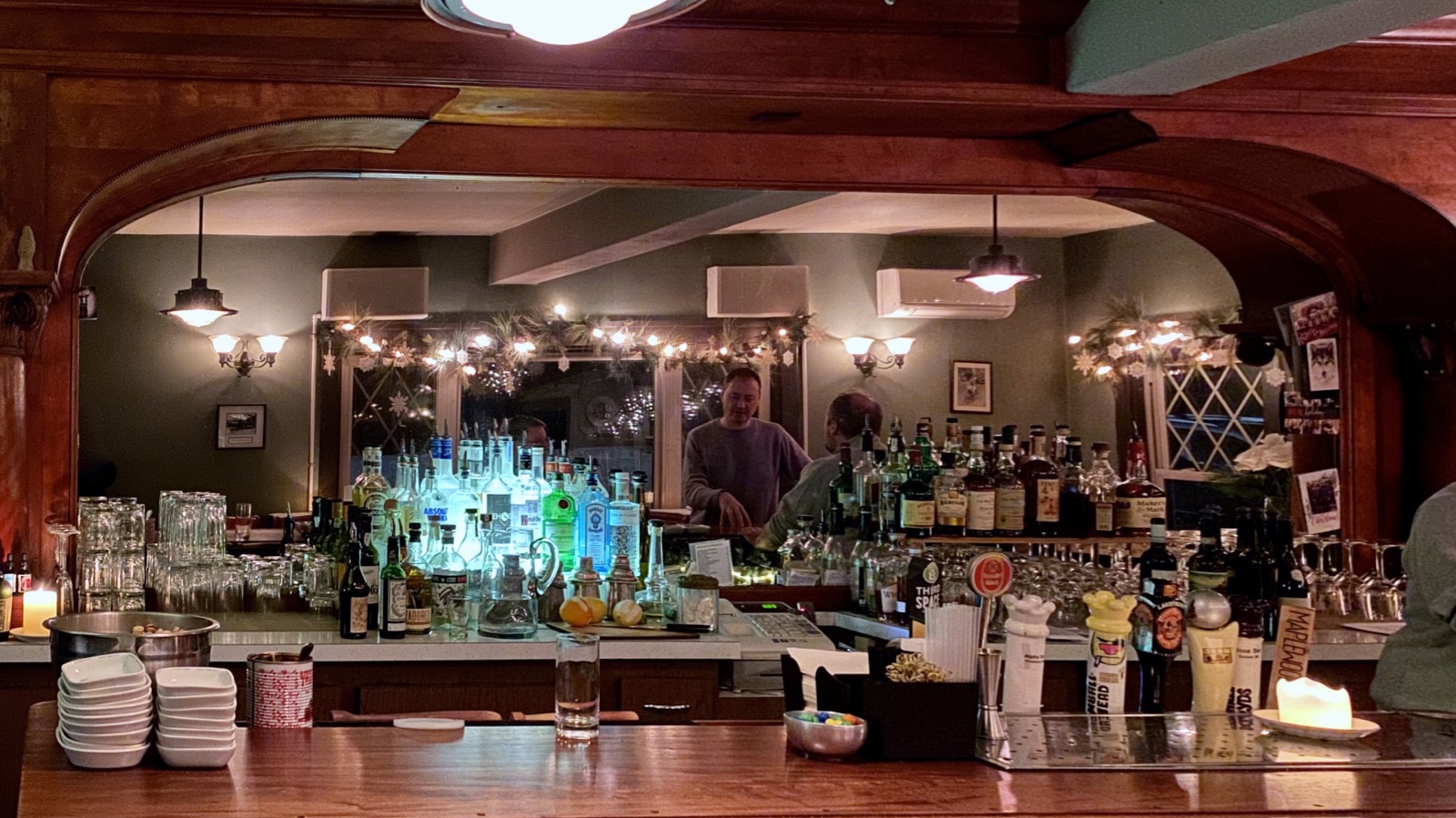 You’ll also find a small collection of high four-top tables which are cloaked in linens and adorned with flickering candles, and a back room that accommodates overflow when the bar gets really busy. And during the holidays, you'll find the windows decked with tasteful garland and twinkling lights. 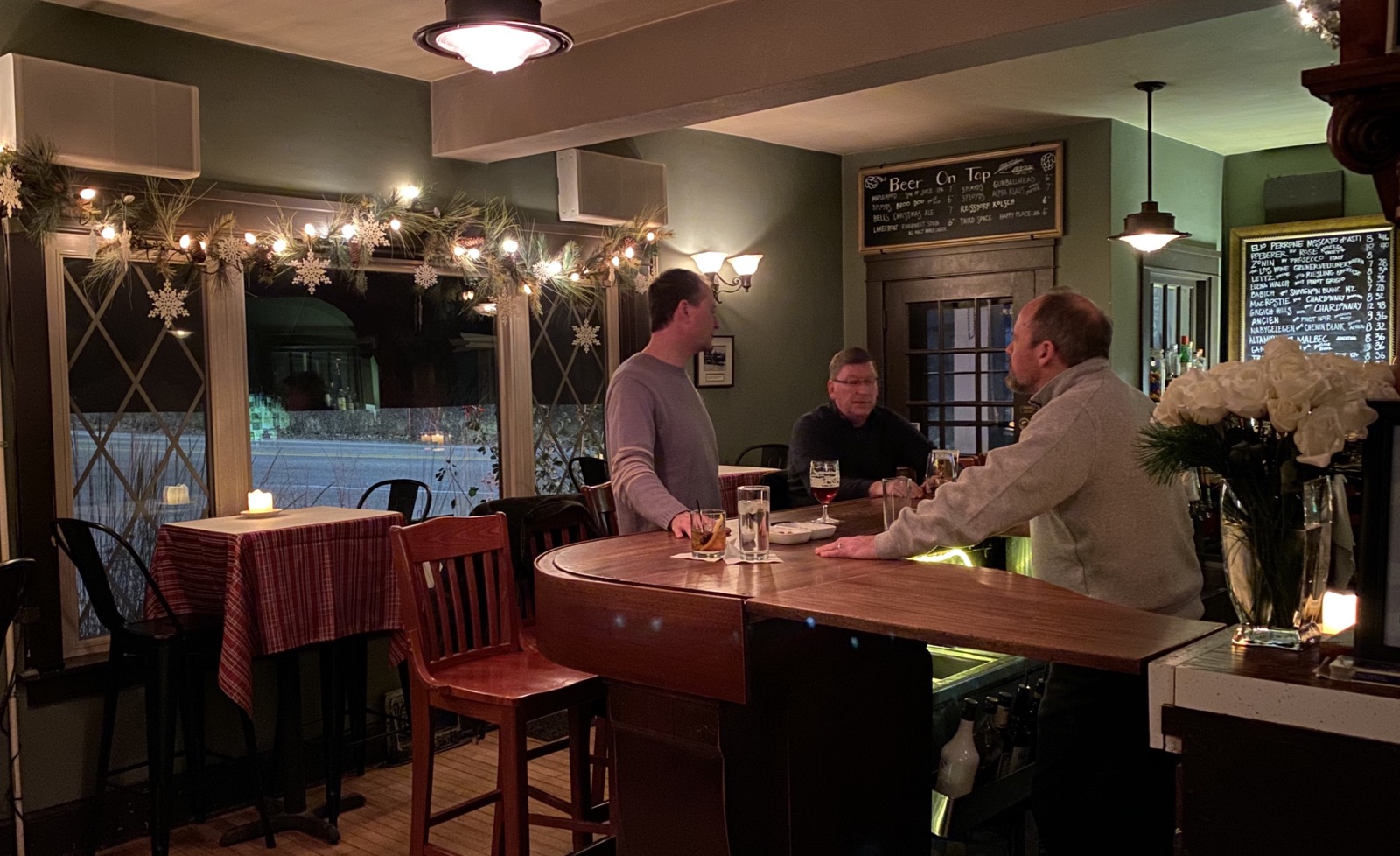 Arrive at 4 p.m., and the bar will be quiet. But hang around for an hour or so and the regulars will arrive. They’ll gather around the seven-seat bar where they’ll greet one another and chat about their day while nibbling on pistachios and enjoying a glass of wine, a cold beer or one of owner Ben Grade’s popular hand-muddled old fashioneds (some say they're the best in the State). 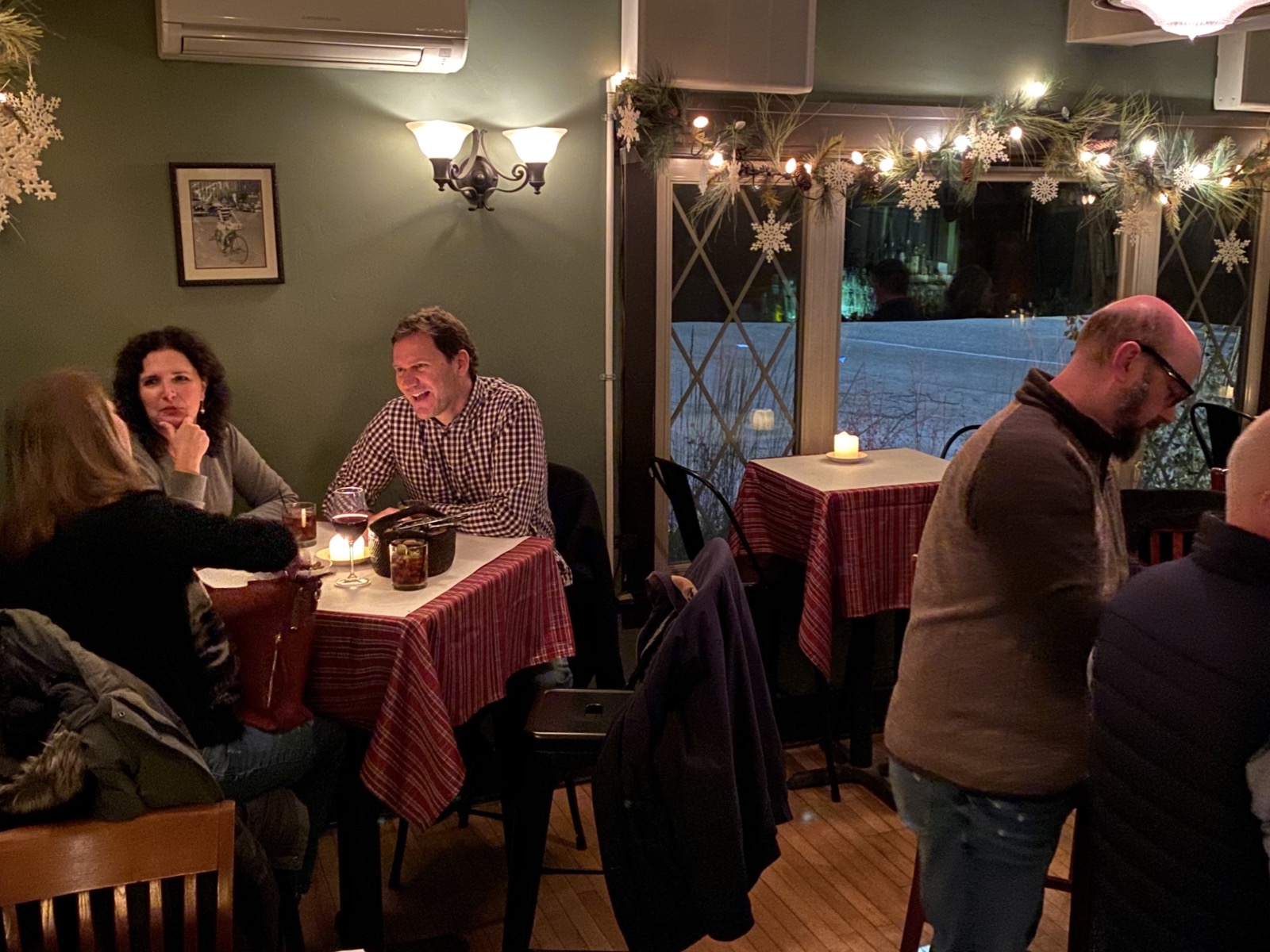 In addition to Grade, who works at the bar most evenings, guests are likely to be greeted by any one of a small, friendly cast of regular bartenders including Polly Partane, who regularly tends bar on Monday evenings, and Evan or Lois Bray, a husband and wife who’ve both worked at the bar for about 10 years.

"People come to Ernie’s to visit with their friends," notes Evan Bray "And new people come here out of curiosity because they’ve heard it’s such a special place."

Grade nods. "The most common reaction I get when people walk through the door is: ‘It’s so cute!’"

And they’re not entirely wrong. The bar could be considered cute. Its decor is charming, and its atmosphere is classy. Even better, behind it all is an endearing story of the bar's namesake: Ernie, a Wheaten Terrier whose laid back personality made him the ideal bar dog. 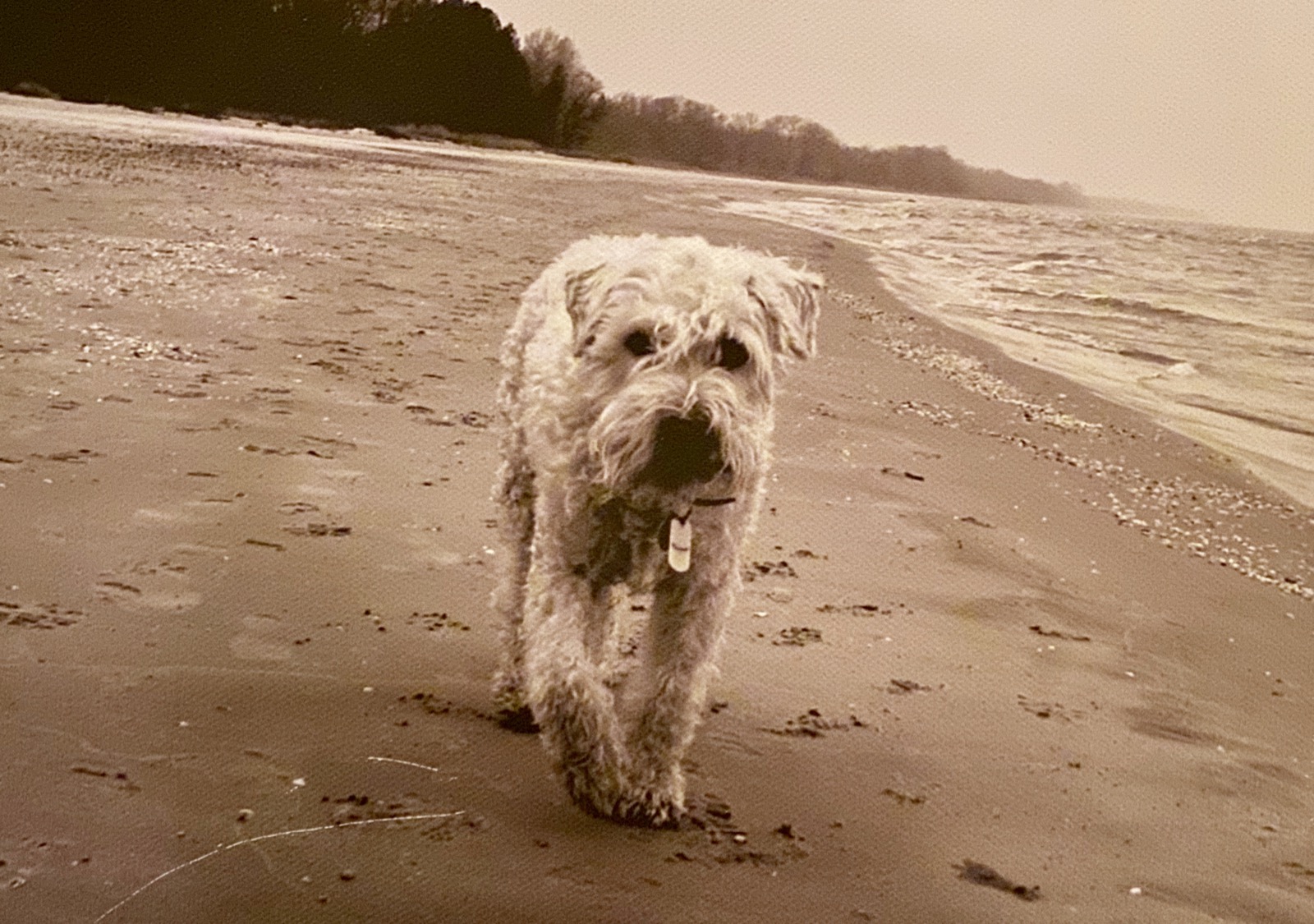 "He was a great dog," says Grade, his eyes flickering with emotion. "Just before I bought the bar, my wife Sandy and I had two dogs. When one died, Ernie was sort of sad about it; so I took him under my wing. We spent a lot of time together. We took a walk together every day, and then he’d come with me to work. So a lot of people here remember him."

For seven years, Ernie was an inextricable part of the bar experience. He was a low-key pup who eagerly greeted customers upon their arrival. He liked almost everyone. And he was content with a simple scratch behind ears or – if he was lucky – a dog treat.

But on Dec. 26, 2012, at the age of 11, Ernie quietly passed away. Following his death, the family started a fire behind the bar to soften the frozen ground in preparation for Ernie’s burial. As it burned, regulars made their way to the bar, one by one, forming a crowd of support for Grade, whose heart had been utterly broken by the loss.

"It turned into a huge gathering," says Bray. "And everyone came out to show their support." 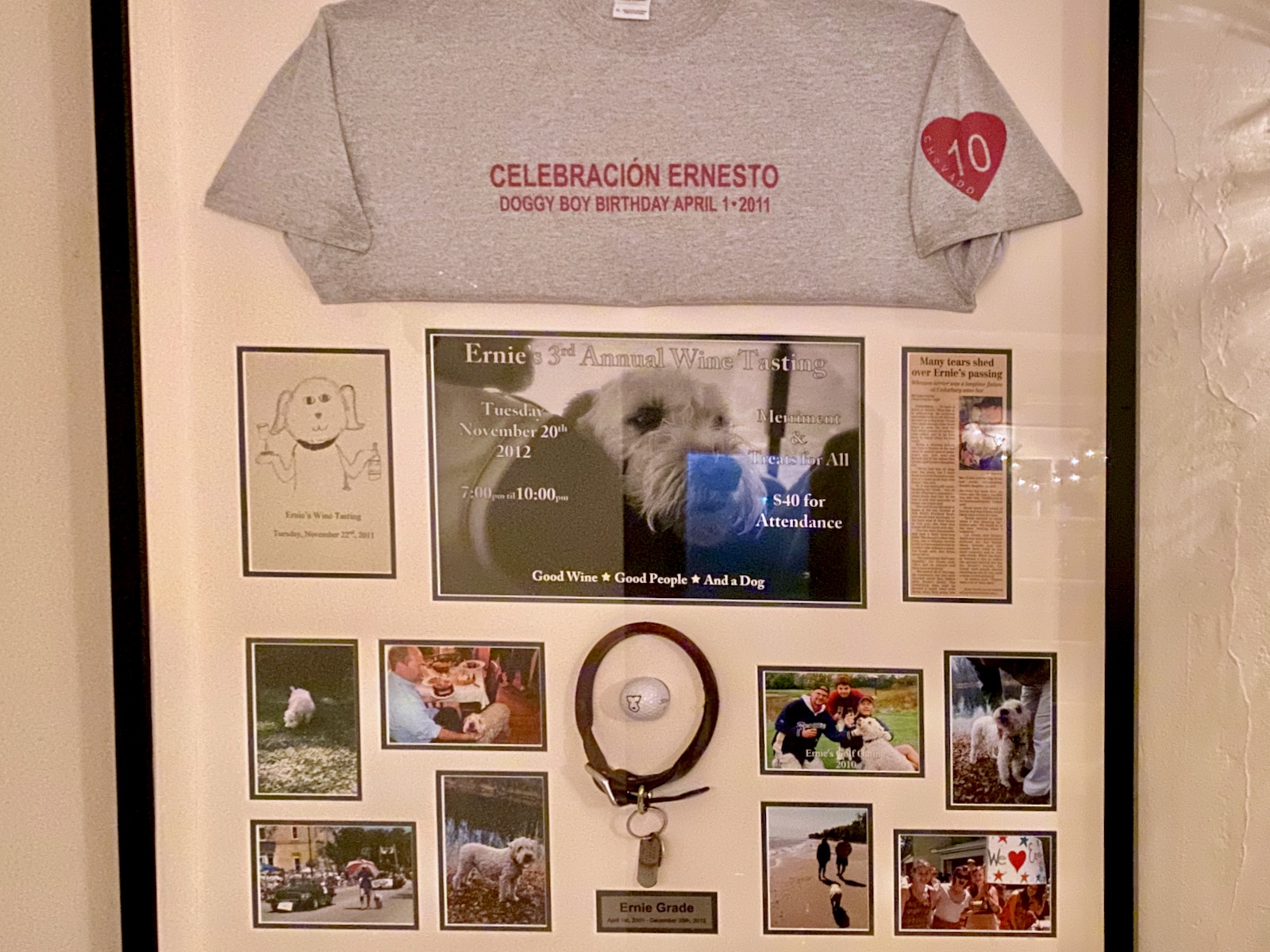 The people make the place

That spirit of community forms the backbone of Ernie’s Wine Bar, the name of which also pays homage to Grade’s background in the restaurant and wine industry, a career which included operating a restaurant with his sister in the Bay Area along with subsequent work with a variety of area businesses including Green Tree Liquor and Otto’s Wine. 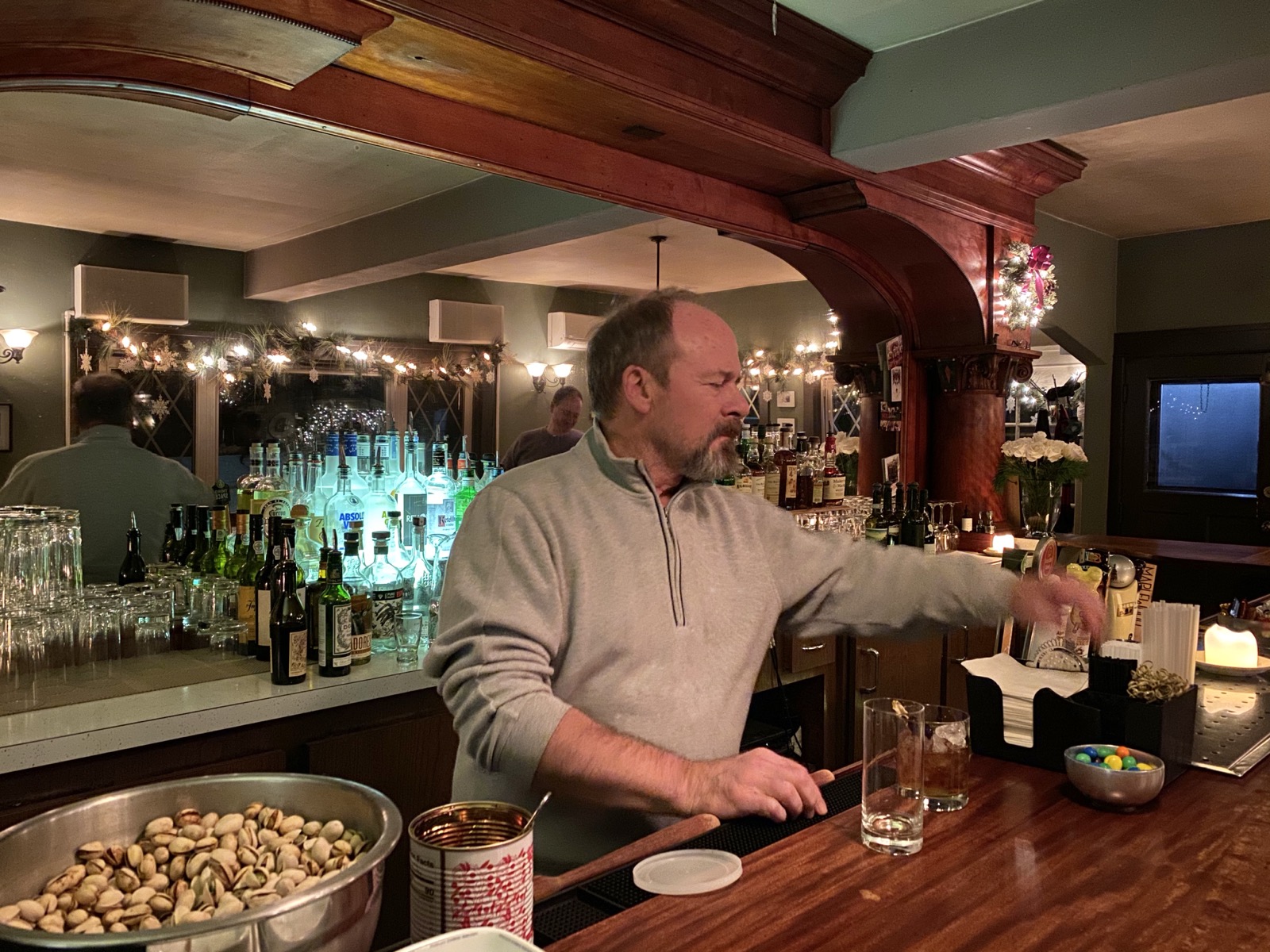 "At first, I dictated the wines I carried," says Grade. "But over the years, it became more about what people drank."

Ernie's isn't exclusively a wine bar; nonetheless, the wine list is impressive (and well priced). There are close to 100 options, from German Riesling and French champagne to Argentinian Malbec and Zinfandel from the Russian River Valley. Over 20 are available by the glass, with the remainder sold by the bottle. 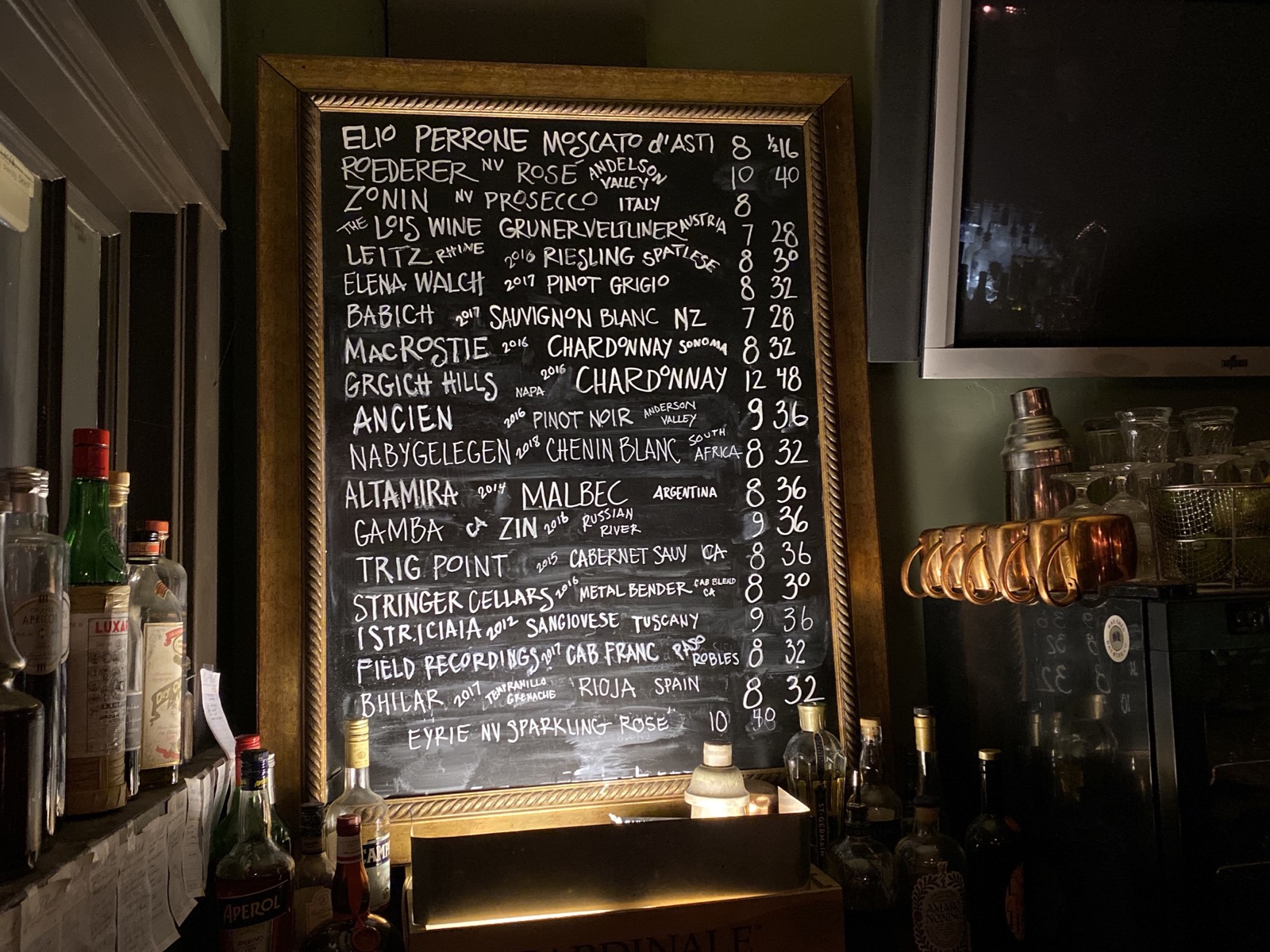 The beer list is equally nice and includes craft brews on draft, including selections from Lakefront, Bells and Three Floyds, plus a collection of bottled brews that range from accessible domestics like Miller High Life to large format Belgian Trappist ales.

"This place is unique in that you have wine and cocktail stylin’s by Ben Grade …" says Bray. "I think people tend to overlook our cocktails, but it’s definitely the sort of place where you should come in and enjoy the craft of the cocktail."

Popular options include Grade’s hand-muddled margaritas, which are served with an extra shot of tequila on the side. There are also Trinidad Sours, inspired by the recipe at Boone & Crockett and the "Eddie Podolak," a Bittercube Reverse Perfect Manhattan named after the Kansas City Chiefs football running back. 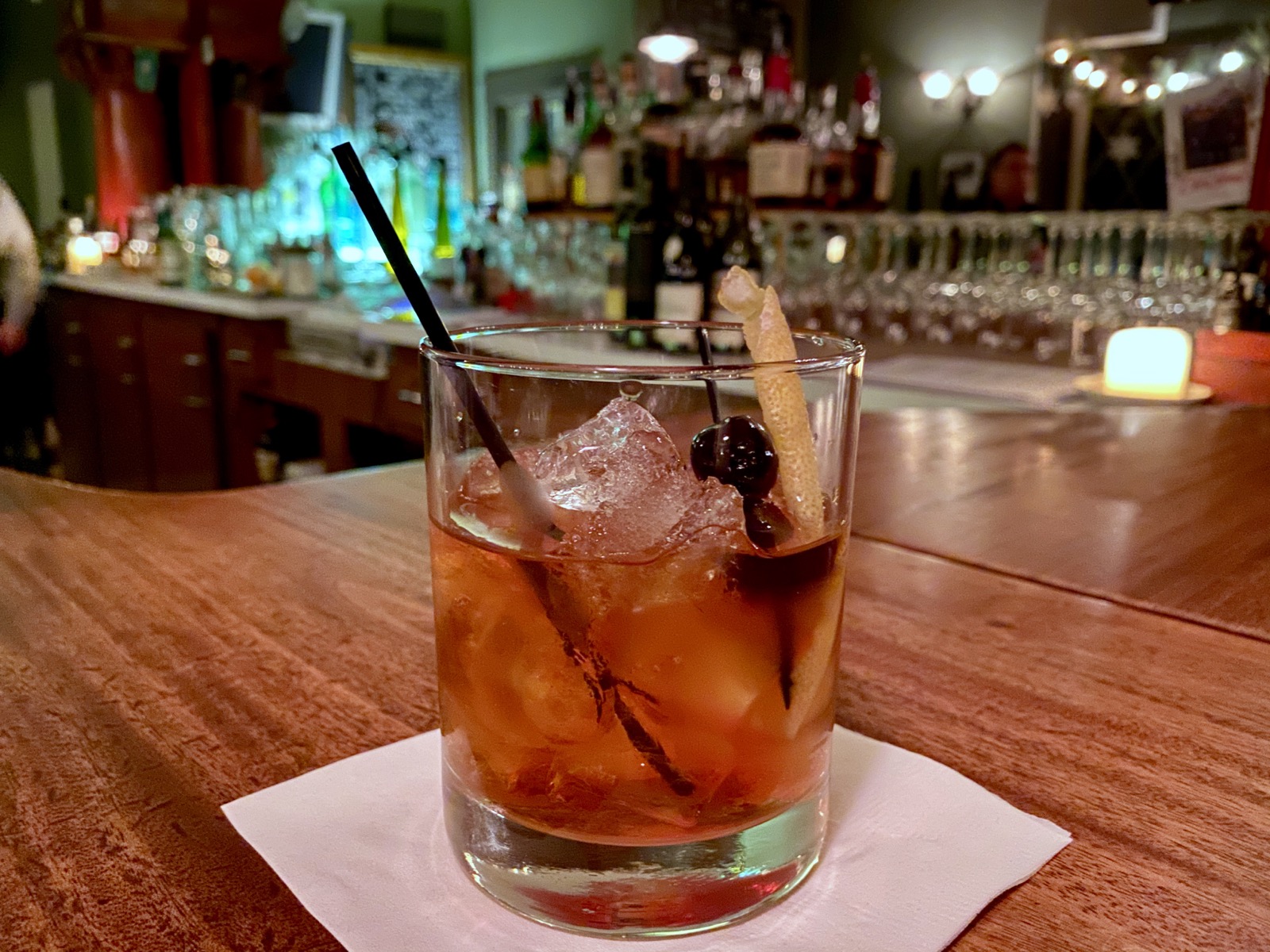 And there’s at least one customer who claims that Grade makes the best martini on-the-rocks in the country. Tim Dalton, a salesperson who travels to Wisconsin a few times a year on business (and to visit his brother, who lives in Cedarburg).

"I order martinis across the country," he says. "And I always order a Ketel One martini on the rocks, lightly dirty, with a couple of drops of sweet vermouth. At least half of the time, the bartender serves it up instead of on the rocks. But here, it’s always right."

If you’re lucky enough to sit at the bar on a night that Grade’s working, he’ll not only treat you to a great cocktail, but also stories that belie his dry sense of humor.

"We’ve had some great characters here over the years, although a lot of them are gone now," he says as I sit at the bar, sipping my Manhattan. "There was a woman who used to come in here. She was probably in her 60s at the time. And she had this big truck that she used to haul horses. God bless her; she seemed to hate everyone …"

She was standing at the bar one day when this guy came in. She had her back to him, but she heard me ask him what he wanted. He answered, and then he changed his mind at least twice. She spun around, pointed her finger at him and said: ‘You, sir, are a moron.’

Grade laughs. "She always had some quip to say ... and a lot of people hated her, but she was so great."

And Grade says it’s the colorful personalities of the bar’s guests who’ve built the character of Ernie’s over the years and made it the warm, welcoming place it continues to be.

"It’s always been a quieter alternative to most bars," he says. "It’s not a college hang-out. The kids go to Maxwell's or Morton’s or 48 North. But it used to be more of a swinging bar; it was louder than it is now. These days our guests are middle aged and it’s pretty quiet."

He pauses briefly before continuing. "There’s word on the street that it’s actually a swingers bar," he says with a grin. "But it’s really not. There’s this guy who comes in now and then who’s actually a swinger … and I don’t think he’s ever picked anyone up."

Grade looks over to gauge my reaction and then continues.

"It’s to the point where we have so many regulars," he says. "But it’s sad when people die or stop coming here. And these days there are folks who have summer homes here, so we see them then, and they move away for the winter. We miss them. It’s like a family here. "

Erie’s Wine Bar is open Wednesday through Monday from 4 p.m. to midnight (closed on Tuesdays). And if you happen to wander in the direction of Cedarburg on the Sunday before Christmas, you should be sure to stop by for Ernie’s annual Tom & Jerry Day.