Before Amazon, shopping malls were the place where you could find just about anything. In Southridge Mall's case, that's still the case - with a twist, as among the usual department stores and retail shops, you can also find a full craft brewery.

Before Amazon and drone deliveries, shopping malls were the place where you could find just about anything. When it comes to Southridge Mall, that’s still the case – with a twist, as among the usual department stores and retail shops, you can also find a full craft brewery plus a pub to enjoy its wares and some food to wash them down.

Indeed, when you think about eating at a classic mall, your mind typically turns to Sbarro, Auntie Anne’s or, if you’re really lucky, Panera. And drinking? That’s what Applebee’s (or the parking lot plus a incognito six-pack or brown-bagged bottle) are for. But malls are changing – and The Explorium Brewpub is a part of that change.

While the traditional anchor stores have shuffled in and out during the brewpub’s time, it’s now Explorium, modestly sitting in their shadow, playing the role of the neighborhood hangout those big boxes, national chains and food courts once did – and with a beer version of an Orange Julius to match. (It’s a milkshake IPA called Mallrats.) 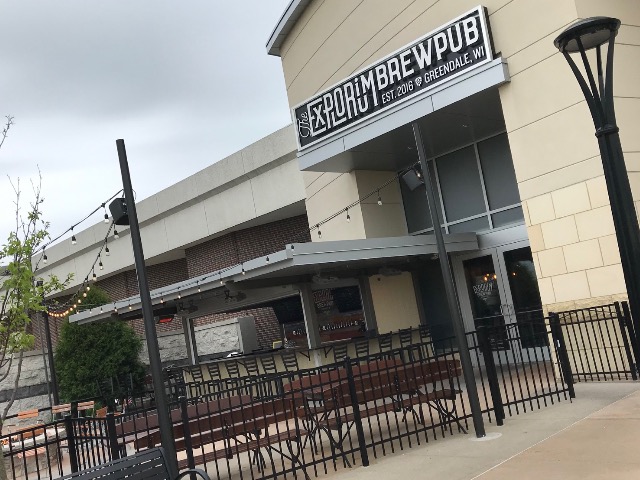 "We’re a very serious brewery that just happens to have stationed itself inside of a building that, for some reason, has a stigma associated with it," said co-owner Mike Doble. "It’s not like we’re in a poop factory; we’re in a building with other local businesses in it."

Still, moving into a mall was admittedly "scary" for Doble – especially Southridge, which was in the midst of significant transition back in 2015-16. When he, along with his wife and The Explorium co-owner Joan, first looked at the former Ruby Tuesday’s space, Sears was holding its liquidation sale, Kohl’s was expected to move to the upcoming 84South shopping center and JC Penney was on struggling legs. One of the safest bets of the anchor bunch was, ironically enough, Boston Store.

But even so, for the Dobles, it was also a dream, helping him pursue a passion brewed in his family over the years and over a lifetime of travel. 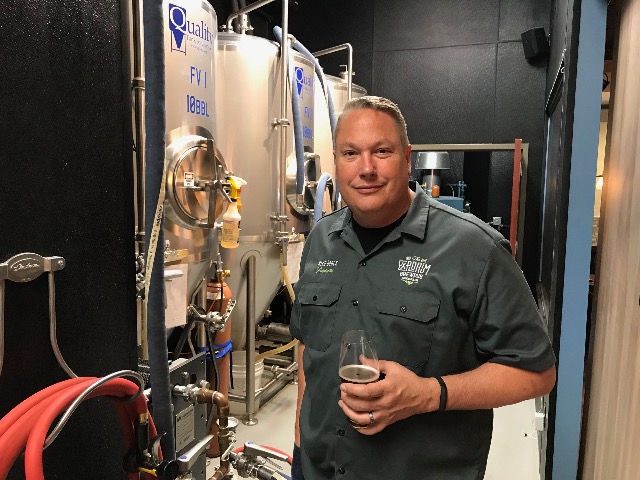 Growing up with a father working in the Army, Doble – the only one of four brothers to be born in the U.S. – spent much of his early years moving across the globe, eventually taking him to Belgium for his formative drinking years. He grew a taste for Belgian beers – still his favorite style to this day, especially Belgian quads – a palate that was tested when he returned to America.

"When we came back to the States, living in Virginia, there was really no good beer," Doble recalled. "My favorite beer at the time was Miller Genuine Draft, but there were none of those big, bold flavors from the European beers. My brothers were experiencing the same thing, so they started home-brewing."

His parents noticed and appreciated their sons’ brewing hobby, and after retiring from the military, Doble’s father and mother themselves hopped on board, opening a home-brewing supply shop in Tampa, Florida. In 1996, the store’s success evolved into an actual brewpub, Tampa Bay Brewing Company, that Doble eagerly helped with – and wanted to duplicate in the city he now called home, Milwaukee.

"When I would see what they were doing in Florida and saw how the beer scene was growing, our scene wasn’t developing like theirs was down there," Doble noted. "I spent a lot of time trying to figure out why, and the answer was we needed more breweries."

After spending years perfecting his home-brewing ideas and techniques, and spending a year in Florida helping his family build and design their new brewery location, as well as learning more about the hospitality industry, Mike and Joan Doble returned home.

They also decided it was time for them to develop their own brewpub and become a part of the craft brew scene they wanted to see in Milwaukee – and were beginning to see in the form of longtime Cream City craft brewers Lakefront and Milwaukee Brewing Co., as well as the growing wave of newcomers like Raised Grain, Third Space and more. It took some searching, but in 2016, they finally found their spot.

"I came in and looked at this space, and it was a disaster," Doble admitted, "but all the things I was looking for – outside space for a patio, plenty of parking, a property owner that’s flexible – it had everything. And once it was gutted out, it was a big empty box, a great solid building."

The Dobles certainly filled that big empty box – and then some. Even just looking into The Explorium from the mall entrance, one can see the full Explorium experience, from the active bar area to the kitchen with its roaring wood-fired oven cooking pizzas, a dining space filled with tables, a fire place and a glimpse into the guts of the brewpub’s brewery – all united with warm brick and rustic wooden planks wallpapering the space. It certainly doesn’t look like some blandly sanitized and antiseptic mall eatery. 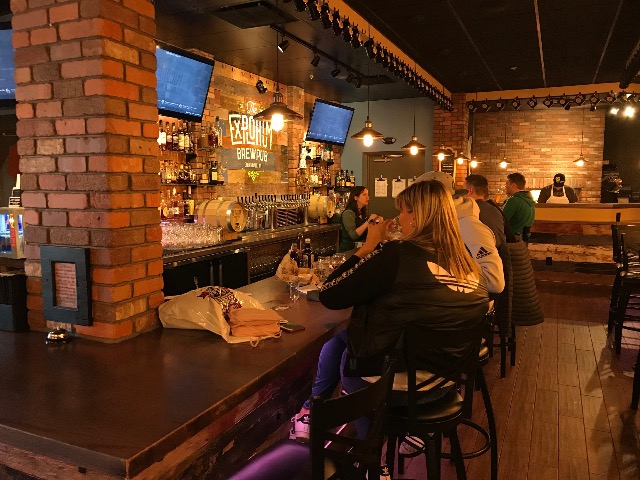 All that’s before you actually enter The Explorium. (Doble said he designed the space that way, an inviting glimpse inside for guests as opposed to blocking off the brewpub with walls and a greeting stand.) As one takes a closer look, you find a cigar humidor for the venue’s community of cigar smokers who enjoy the all-year patio space, a cozy fireplace space for beers and conversation and a mission statement above the bar area – "Explore. Taste. Discover." – in line with the venue’s name. 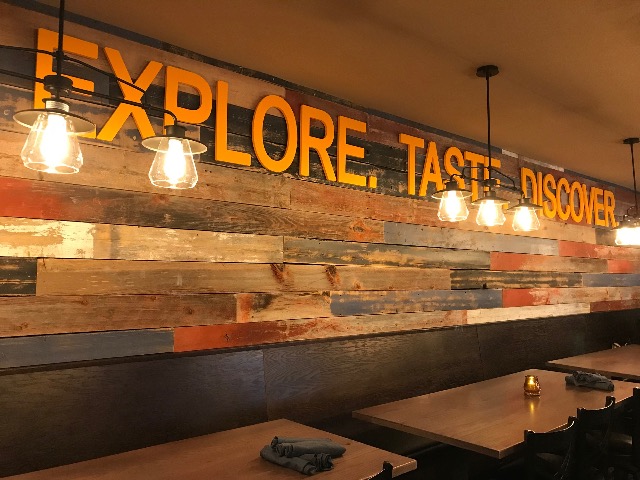 "One day, my wife said, ‘Why don’t we call it The Exploratorium?’" Doble said. "‘We like to travel. You worked as a civil engineer doing mapping. Exploring and checking out new things applies to our beer.’ And I thought that was a brilliant concept. Then, because of The Fermentorium, we shortened the name to The Explorium."

Scattered throughout the space are short walls of wooden barrels, but they’re not just for aesthetics or for show. Inside each barrel are actual batches of The Explorium beer in the making, aging and taking on the flavors of their little wooden hotels – whether it’s French cognac or Maker’s Mark. Then there’s the brewery itself, mostly tucked away in The Explorium’s basement – Doble and company most certainly make the most of their mall space – though several tanks and fermenters are active and on display in the dining area, allowing visitors the ability to watch the process that led to their pour. 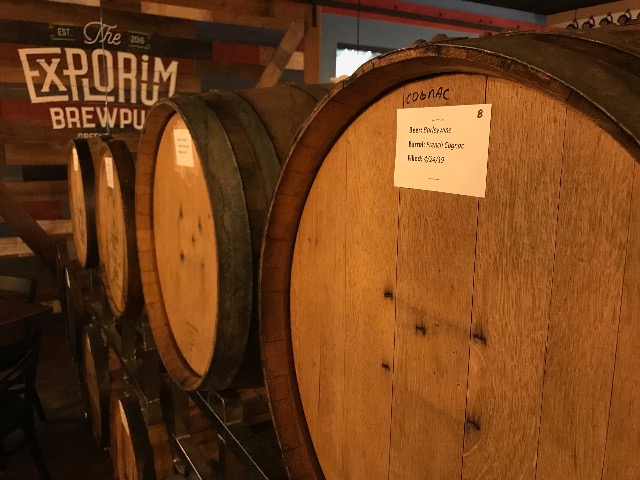 As a special bonus, the opposite side of the space’s doors has a map of the United States, with stickers marking all the fellow craft breweries that have visited The Explorium – including one for Tampa Bay Brewing Company, now run by Mike’s brother, David, and Aviator Brewing Company in North Carolina, which is run by another brother, Mark. Blood runs thicker than beer in the Doble family, however, so there are no brew battles. 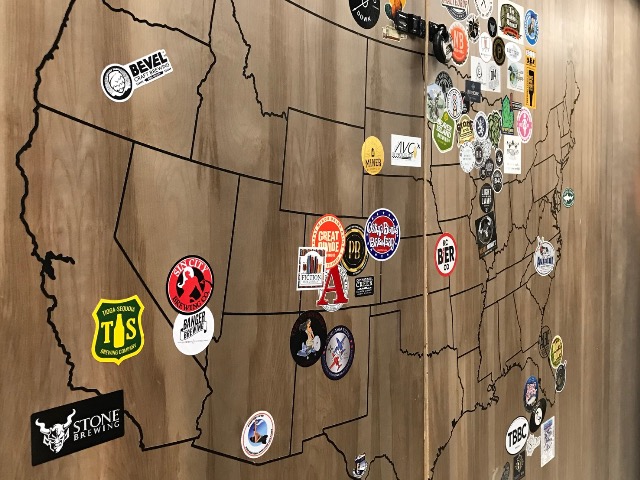 "We don’t because I make the best beer," Doble joked. "But we do get together once a year, all three of us, and we brew a batch of beer as a collaboration. Normally it’s for Tampa Bay Beer Week; our older brother Johnny passed away 15 years ago, but his original brew house is still in the Ybor brewpub, so all three of us brew in there and do a collaboration beer. It’s cool for my mom and dad, a nice thing for them to see us working together."

Of course, the star of the show isn’t just the physical brewery but what comes out of it. The Explorium features 24 taps, all brewed in house and stretching across a variety of flavors and tastes. There’s the aforementioned fruity yet balanced Mallrats milkshake IPA, three Belgian options – though none of Doble’s beloved Belgian quad … right now – a toasted coconut porter, gluten-removed options, a housemade root beer and kombucha, and much more constantly rotating in and out of the menu. (During our interview, he pitched a blueberry pie IPA as possibly in the tank next.)

"Not every beer we make is palatable to every person, I get that, but IPA drinkers can find an excellent, solid IPA. Belgian beer drinkers can find a good Belgian beer. Grandma who drinks only super-light beer can still come here because we have a super-light beer that we designed just for that," Doble said. "I don’t carry mass-produced beer … and because I don’t, I feel some obligation to satisfy that beer drinker, because there’s nothing wrong with that being your style." 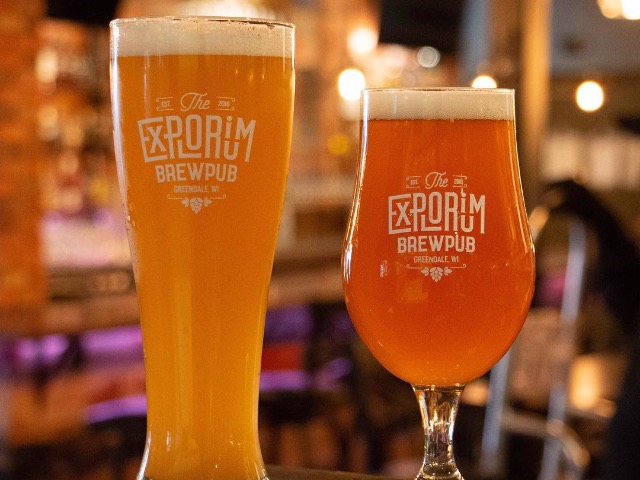 That fully-rounded focus when it comes to its beers, combined with its unexpectedly warm space, a full menu of gastropub-esque food options and its locally-based origins, have made The Explorium quickly a neighborhood favorite and a mall hotspot – especially, Doble notes, as Southridge evolves from traditional retail stores to more entertainment-focused options like a potential sports complex in the former Boston Store space. Even craft beer snobs have come around to The Explorium – slowly.

"The craft beer people were like, ‘Ugh, a craft brewery in a mall? What kind of sh*t is that?’ And still to this day, two and a half years later, I still have people tell me, ‘Your IPA is not bad for a mall brewery,’" Doble said. "There’s this stigma (around malls), that it’s uncool. I must’ve missed that chapter in the book on how to start a brewery that you have to start off in a crappy industrial space."

But even so, Explorium’s won over the town – so much so that Doble’s eyes are looking toward the future. He expects to grow The Explorium out to a second location sometime in 2020, focusing more as a taproom with a bigger brewery space and its own on-site canning due to increasing outside demand for its beers, namely its Lost in the Sauce IPA series. No particular spots have been chosen, but Doble likes the idea of bringing The Explorium to a town or neighborhood that doesn’t have a brewpub – much like Greendale prior to their arrival at Southridge – and spreading the craft brew wealth. And, of course, there are always more beer flavors brewing in Doble’s mind – including his beloved Belgian styles.

Until then, however, Doble’s drinking in his dream – even if it’s come in an unexpected spot. Then again, what is The Explorium but the 21st century translation of the shopping mall’s original appeal: a community cultivator, with the Wisconsin twist of beer.

"We don’t have an old crowd. We don’t have a young crowd. We have an everybody crowd," he said. "Everybody blends – and to me, as a guy who built this brand, that’s the pinnacle of success. I can have a place where everybody feels comfortable and everybody feels like they’re in a cool spot. Everybody just sits down and has a good time and shares a beer – and that’s what I wanted to create."