If you've driven past Fuzzy's Sports Pub & Grill in Waukesha, but you've never stopped in, you might well be surprised by what you find inside. After all, the main draw at Fuzzy's isn't likely what you'd expect.

If you’ve driven past Fuzzy’s Sports Pub & Grill, 627 E Main St. in Waukesha, but you’ve never stopped in, you might well be surprised by what you find inside.

Sure, Fuzzy’s has a full bar that serves up pretty much any sort of cocktail, along with tap beer including Blue Moon and selections from breweries like Leinienkugel’s and Waukesha's Raised Grain. And, yes, you’ll probably find sportsball games playing on the televisions mounted on the pub’s walls.

But the main draw at Fuzzy’s isn’t likely what you’d expect.

Your first clue would be the coffee maker and stacks of coffee cups at a server station in the dining room. Your second clue might be the tables set with napkins, condiments and little bins of Smucker's jam. Your third clue would be the menu. 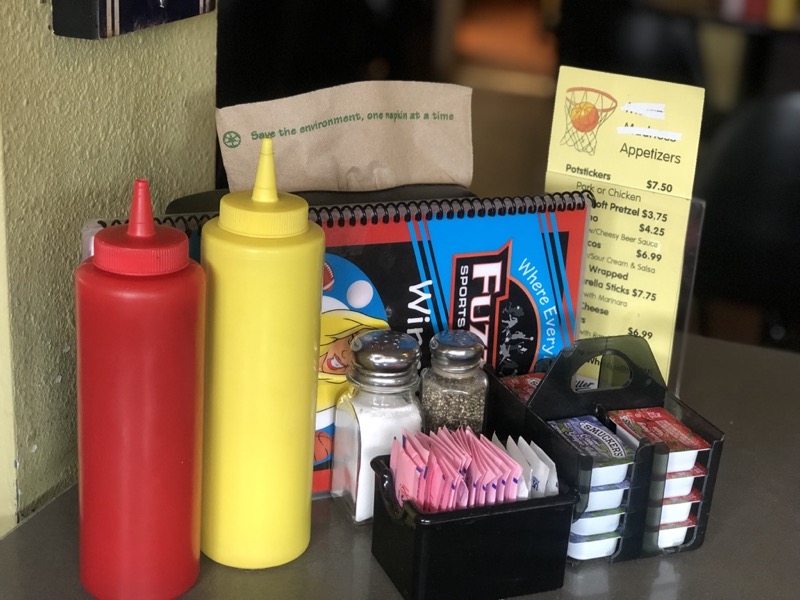 Visit any day before 3 p.m. and you can enjoy breakfast staples like eggs and toast, corned beef hash and omelets. But Fuzzy's offerings go well beyond the basics. In fact its most well loved dishes are things like Morning Bun French Toast ($7.75) and the Billy Breakfast Burrito with chorizo, scrambled eggs, onions and green peppers ($8.99, named for Bill Canzora, who owned the Wisconsin House in Downtown Waukesha). 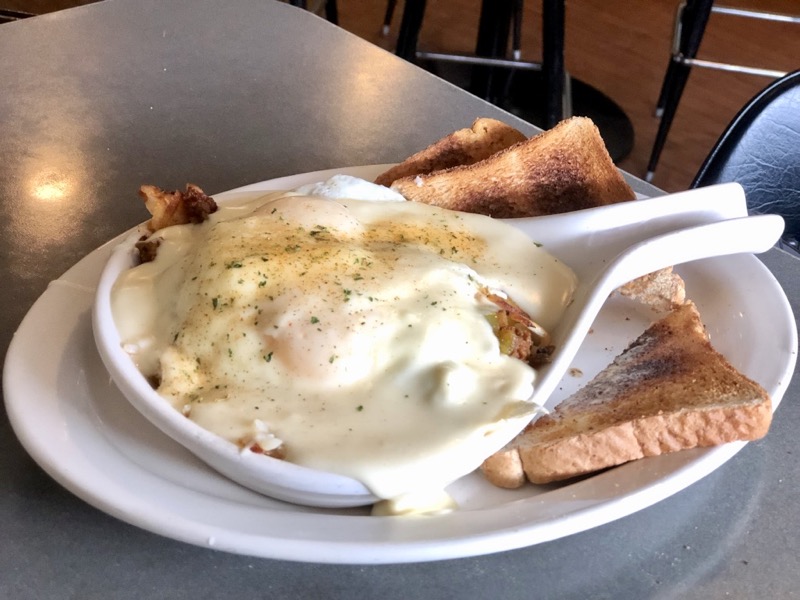 You can get that breakfast served up any day of the week with coffee (of course), a beer or even a Bloody Mary. 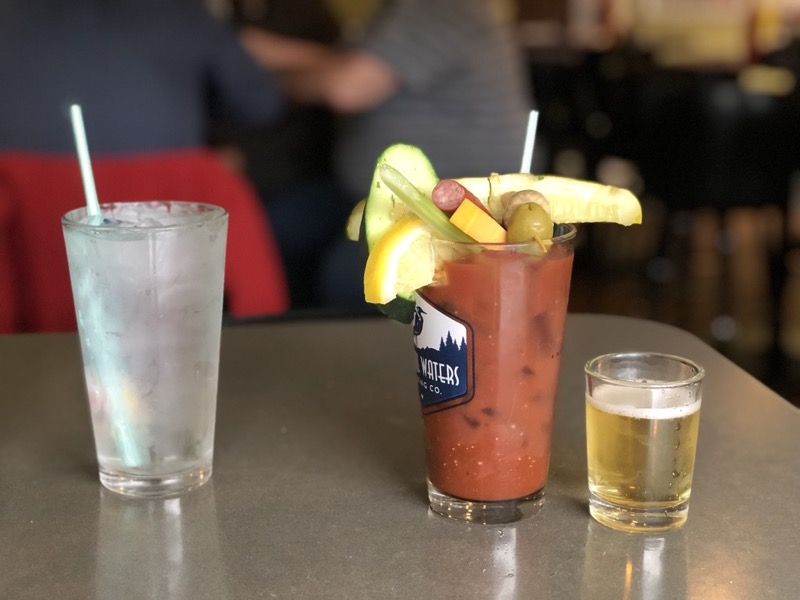 Of course, there are also lunch and dinner options. Fuzzy’s serves up wings, quesadillas and housemade pizza (with a choice of thin or hand tossed crust), along with soups, salads and a variety of sandwiches.

There are also burgers like the Mean Jean featuring your choice of a one-third or one-half-pound burger cooked to order and topped with two slices of American cheese and an impressive pile of housemade haystack onions ($9.75 with fries). It was named for a slightly gnarly waitress who worked at Fuzzy’s over two decades ago. 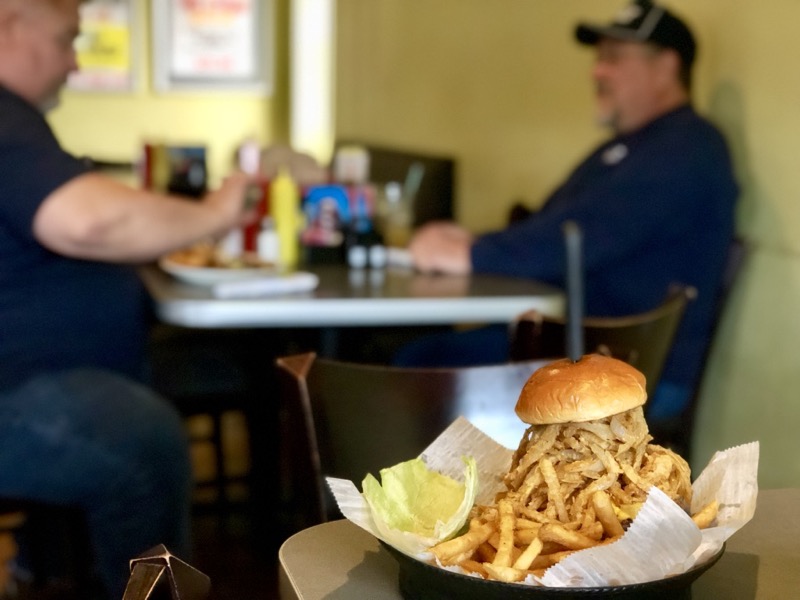 And yes, there are even daily specials. Breakfast specials might include breakfast chimichangas or Tex Mex taco skillets. And guests can enjoy $0.60 wings on Tuesdays and Thursdays; a 16-inch pizza, a pitcher of beer and a half dozen wings for $25.99 on Wednesdays; and a Friday fish fry (cod, perch or shrimp with coleslaw, rye bread and a choice of fries or housemade potato pancakes) on Fridays.

"People who’ve been coming here for 20, 30 years … they always come in with the intention of ordering something new," says owner Phil Santiago. "They flip around their menus, studying the options … and then they order the same thing they always do. I can actually tell, sometimes, from back in the kitchen, who’s in the dining room based on what they order."

Santiago says that the kitchen takes pride in making dishes to order. Nothing, he says, is pre-made. In fact, folks are often surprised to learn that Fuzzy’s makes any number of things, from their famous cheese sauce and Bloody Mary mix to their haystack onions and pizza crusts. 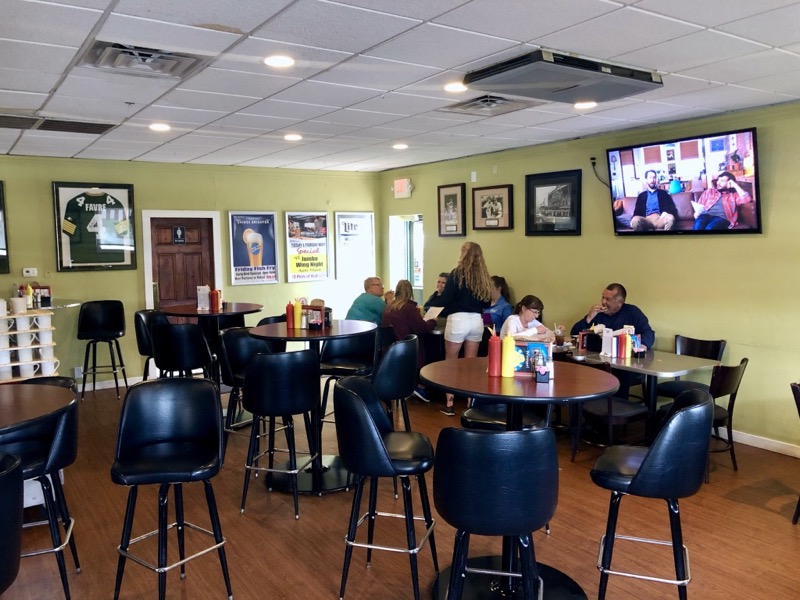 We visited Fuzzy’s on a Wednesday, arriving at the bar mid-morning and departing around 1 p.m. Over the course of about two hours, tables turned regularly, the bar filling and emptying multiple times.

When I commented, Santiago shook his head. He says the past year has been rough due to road construction on Main Street, which was a constant May through December. To make things worse, the road crews are back for another season, bringing road closures, detours and confusing signage with them. 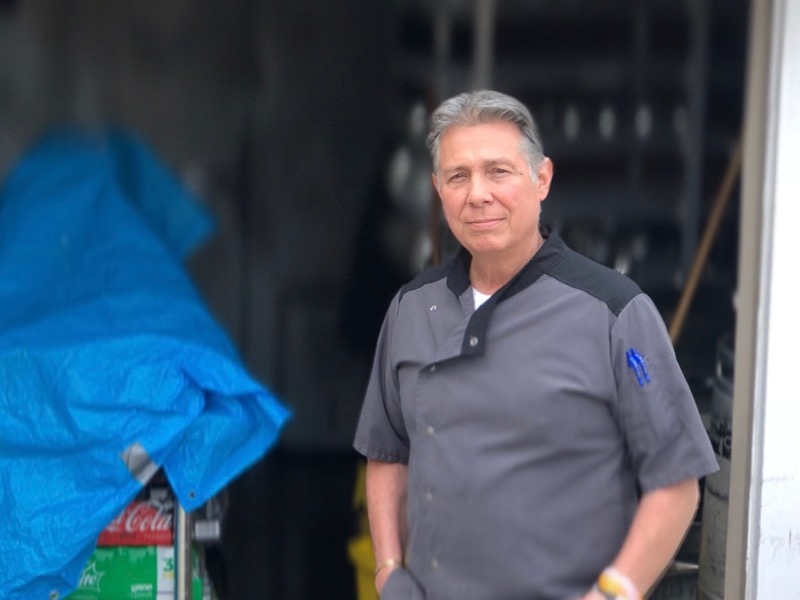 All in all, Santiago says, business is a lot slower than usual. In fact, he anticipates he’s lost at least 25 percent of his usual revenue over the past year.

"We’ve had to cut employee hours," he says. "And we had to push off a remodel that was supposed to happen last year. It’s pretty frustrating. People don’t know how to get to us. All the signs say something different. Some say flat out that the road is closed. Others indicate that businesses are open during construction … but nothing is clear. Our patio is like a big dust bowl. We can’t wait for it to be done."

But Fuzzy’s is a tough little family-owned business. After all, it’s sustained two moves since its opening in 1982. It's first location was in the Moreland Plaza on Delafield Street, and in the mid-'80s, Fuzzy's moved into the former Meurer’s Bakery on Grand Avenue.

"My kids grew up in the business," says Santiago. They’d come with us in the morning, pile into their booths and eat breakfast. And then my wife would take them to school. After school, they’d come back again. And when they were teenagers, they all had jobs here … That’s why none of them are interested in taking over the business now," he adds with a laugh.

Fortunately, Santiago says, he could always count on help from his sister Josie Peterson, who met her husband Dan while working at the original cafe, and his mother Virginia, who helped out on and off over the course of the past two decades.

In fact, it was with their help and support that he made the decision to move the business again in 1992 to its current location East of Downtown Waukesha.

"When we looked at the building, my wife walked in and said: ‘No way,’" he says. "But I had a gut feeling about it." 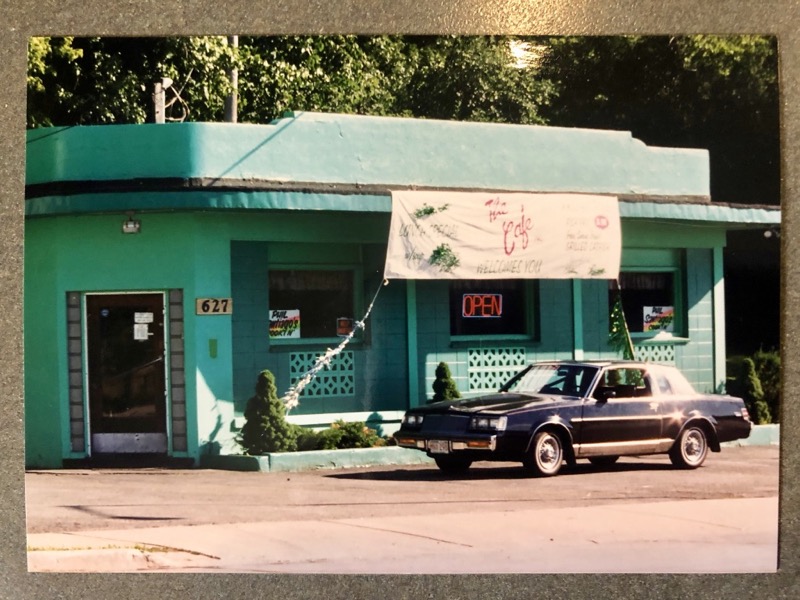 The building had housed a number of venues, from a breakfast restaurant to a burger shop and eventually a bar. Most relied on a customer base comprised of workers from the foundries once located across the street.

"At the time, there was really nothing on this end of town," says Santiago. "Everything was in Downtown Waukesha, and this was essentially the barrio. There were like six foundries here; General Castings was across the street, and for years they were working on remediating the land to turn it into the residential area it is now."

But Santiago felt confident he could make it work. He was familiar with the area. He’d been born and raised about two blocks away from the restaurant in a home he eventually purchased from his parents and where he raised his family. He also felt sure they could retain their customer base.

"Our customers had followed us in our last two moves, and I really hoped they’d follow us again," he says. "... And they did."

Bloody Marys to the rescue

What he didn’t anticipate was the increased competition from area Greek restaurants, which grew to hold the bulk of the breakfast market in the area.

By about 2000, Santiago says he decided he had to do something to bolster revenue. So he removed the existing breakfast bar and installed a horseshoe-shaped bar with seating for about 12 people. The decision, he says, wasn’t meant to make Fuzzy’s into a bar, but rather to enable something most breakfast spots didn’t offer: Bloody Marys every day of the week. 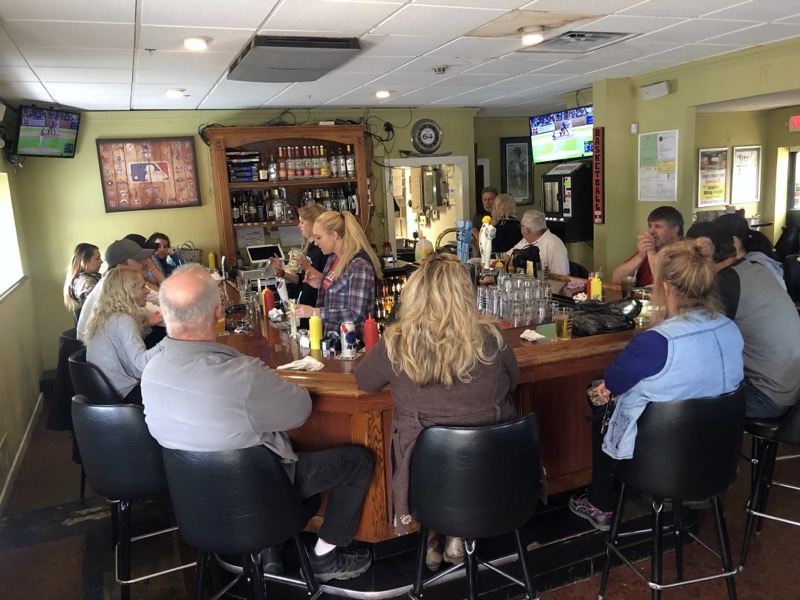 "It really did give us a leg up," says Santiago, noting that he knew he was taking a gamble. "Once we put the bar in, we knew it was never going to be a family restaurant again … and we didn’t put ourselves out there as a family restaurant. We don’t have booster seats or high chairs … but people still bring their kids and they set them up in their car seats. More importantly, they keep coming back. We’ve been really lucky."

In more recent years, the bar has also attracted a new kind of crowd.

"In the last two years, I’ve seen more day drinkers …" he says. "it’s really trending, especially on the weekends. We get a younger crowd on weekends that come in for breakfast and then hang around and drink all day."

Despite the uptick in bar-goers, Santiago says 78 percent of Fuzzy’s revenue still comes from food. And, although a large number of the bar’s customers are regulars, new customers seem to be discovering it all the time.

"Most new customers come in out of curiosity," he says. "They’re stopped at the train tracks and they wonder how a bar can have so many cars in the parking lot."

When they come in, he says, they’re usually hooked. "You walk into a place and you can tell what it’s like by the chemistry between the people," he says. "And here, we have good people."

It’s a chemistry that customers see and appreciate. It's also the reason why Santiago now operates a second Fuzzy’s location in the old Union Hall at 1726 S. West Ave.

"I wasn’t looking for another restaurant," Santiago says. "But about five years ago the union guys – many of whom were our customers – came to me and asked if I’d consider it. They’d been to my place and liked how we operated. The building hadn’t been touched since 1967, so it needed a lot of work, but we made it happen… the kitchen there has been open for about 10 months now."

After all, it only serves lunch and dinner.