Art Guenther is a man of opinions. At 72 years old, he's not interested in being cordial - he prefers to tell it like it is - which he does, nightly, from behind his bar at Just Art's Saloon, 181 S. 2nd St. But but this is exactly why the "regulars" choose to be regulars.

Art Guenther is a man of opinions. At 72 years old, he’s not interested in being cordial – he prefers to tell it like it is – which he does, nightly, from behind his bar at Just Art's Saloon, 181 S. 2nd St.

"My customers know I am going to tell them how I feel and the ones who can’t handle it don't come back and that’s fine," he says. "I’m not an agreeable person. I’m not a ‘hugger’ and I never will be. I’ve lost a lot of business because of that, but I don’t worry about it. My mortgage is paid."

There are zero to few topics that Guenther can’t speak at length about. He is opinionated and intelligent; a product of his time and rigid in his views – but this is exactly why the "regulars" choose to be regulars.

"I am firm but fair and I treat people the way they treat me," he says. "I love people who take strong positions and speak their mind. The problem is people don't always have all the facts on both sides. People only know bits and pieces."

The "PC police" should probably avoid Just’s Arts Saloon because the chance of hearing an ethnic joke or Guenther’s thoughts on politics or the central city is probable. His perception is largely based on his experiences growing up at 15th and Clarke Streets in the ‘50s and witnessing the neighborhood transition from German, Irish and Slovakian to African-American families.

Both he and his brother were assaulted by a group of people – Guenther believes it was racially motivated – but he finds humor in his brother’s attack because "four black women knocked him off his bike and beat him up."

Much of Guenther’s conversation is peppered with humor and a dash of self deprecation, regardless of how dark his comments are. When speaking of his brother, who drowned in Lake Michigan in 1972, he says, "My brother set a new world record for holding his breath under water the longest." And then, after a brief pause, "They never found his body."

When asked if he has a significant other, Guenther says, "I have lots of girlfriends. They come to the bar and talk to me every day. I can still give a woman the best 45 seconds of her life" and then follows up with, "it’s been a long time since I've had a girlfriend."

Guenther is considering selling his bar within the next year or so. The weathered building – along with a parking lot and another modest house to the north that Guenther also owns – is located in a prime Walker’s Point location. Although Guenther’s received numerous offers, he isn't quite ready to sell. But he says he will be soon. 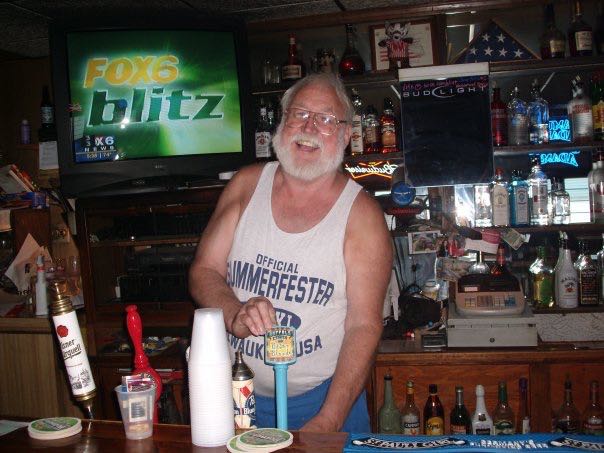 After he retires, Guenther says he has a few options. He might take the money from the sale and remodel the house next door (he currently lives upstairs from Just Art’s) or he will buy an RV, go to Burning Man (which he’s wanted to do for 15 years and has books about the festival behind the bar) or drive from state to state as a guest bartender.

"I’ll drive around in my RV and get on that ‘tweet’ thing and tell people, ‘I’m at the Cadillac Ranch in Texas, come shake dice,'" he says.

His other post-retirement possibility is to move in with "the widow Kindwall," a woman whose doctor husband died and left her with a large home and even larger sum of money.

"She liked me in high school and she has sent me many cards throughout the years, some which say ‘I look forward to seeing you,’" he says. "The widow Kindwall is an option. And you gotta have a lot of options in life."

The damaged building sat vacant for a few years until Guenther was hired to repair the roof and perform other carpentry duties. He decided to buy the bar – originally with three other people, who all decided not to pursue the purchase. Hence, Guenther bought the bar in 1980 by himself and aptly named it "Just Art’s Saloon."

At the time, he had never bartended before, but with a psychology degree from California State University under his belt and few job prospects at the time he decided to do it anyway.

"I knew nothing about bartending and I still don’t," says Guenther. "I am probably one of the 10 worst bartenders in Milwaukee. But it doesn’t matter. The bottom line is we got very popular here."

At the time, Just Art’s was one of the few "straight" bars on the block, but patrons from other LGBTQ bars such as C’est La Vie and Club 219 would sometimes stop by for pizza. 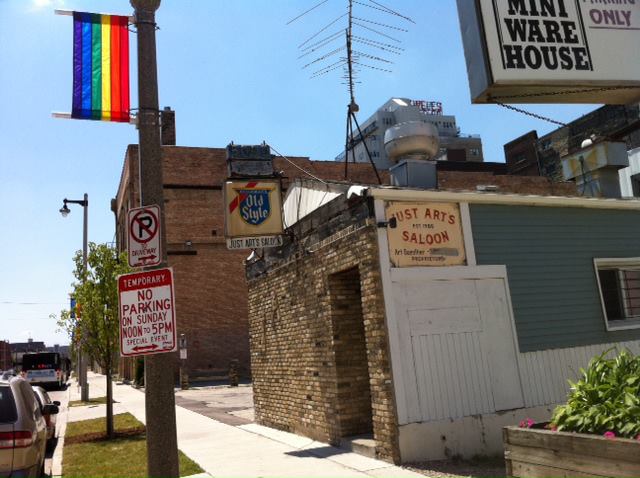 "You would swear Marilyn Monroe and Cher were hanging out, but then you’d get closer and … Adam’s apple," says Guenther. "I don’t understand it, but I don’t really care what you do. My attitude is ‘live and let live’ – unless you mess me over and then I am very vindictive about getting even."

Food is important to Guenther, who shares it generously, even though he describes his fare as "filling and adequate." Pizzas are made almost entirely from scratch – it’s free on Wednesdays from 7 to 11 p.m. – and the $9.50 fish fry could compete with any of the city’s classics. Every Friday – as well as on Christmas and his birthday in April – Guenther provides an exceptional free spread of food. Complimentary snacks are also always available.

Although many bartenders have come and gone from Just Art’s, Kelley Arlt has tended there since 2001 and plans to stay until the very end.

"Kelley and I run this sh*thole," says Guenther.

According to Arlt, customers return to Just Art’s because it’s laid back, the regulars are genuinely kind and the bar food is surprisingly good. 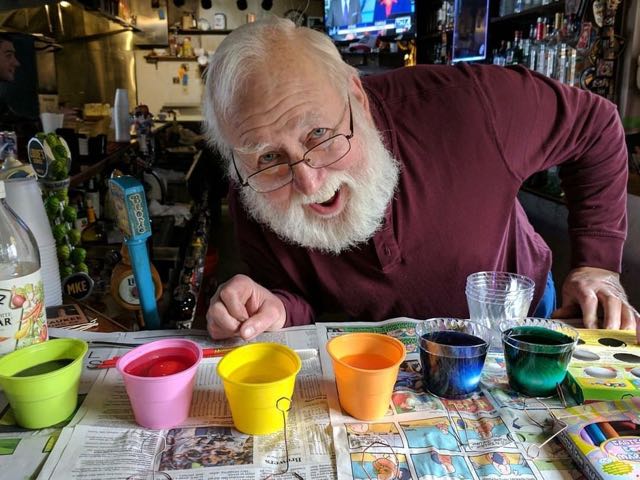