In addition to being a lively, friendly bar with live music, karaoke and trivia, Mainstream Bar & Grill in the heart of Waukesha's lovely, walkable downtown, has the best burger in town.

In many cases a bar is a bar, right? Beer signs, sports on the televisions, cold beer on tap.

Mainstream Bar and Grill, 404 W. Main St. in the heart of Waukesha’s attractive and walkable downtown, has all that. There’s also a stage for live music, karaoke on Wednesdays and free trivia on Tuesday nights. When there’s no band playing, a giant screen is lowered to show big-screen sports. 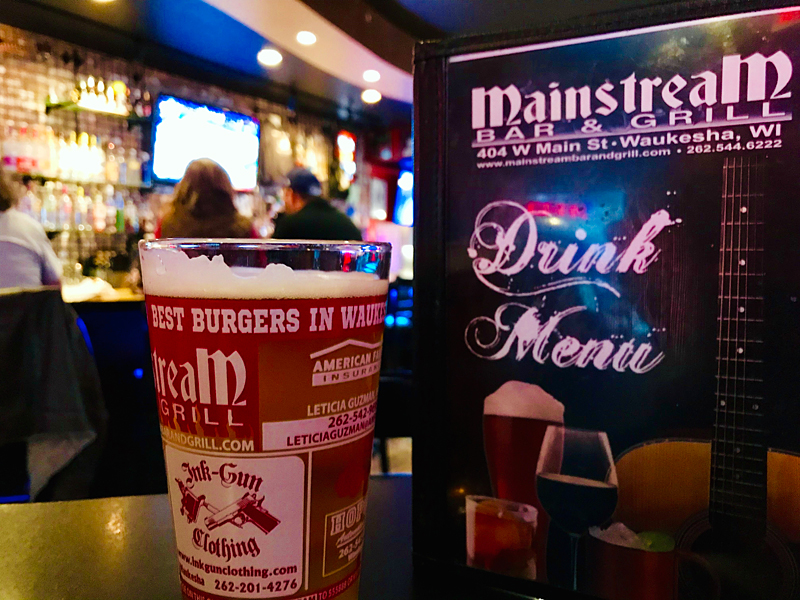 The decor is rock and roll-themed, with album covers, guitars and autographed drum heads. 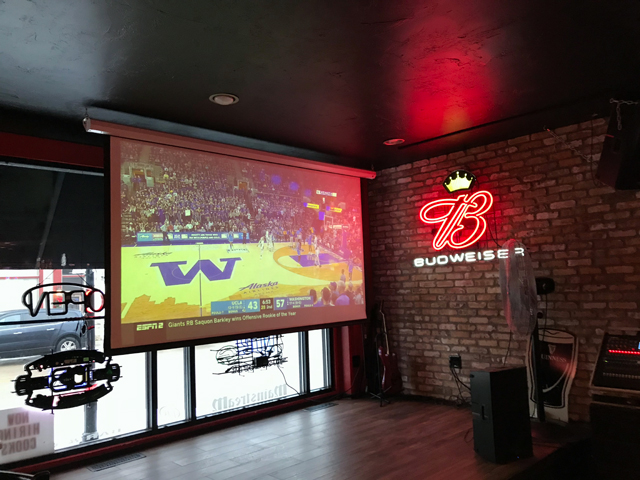 But not so fast. Mainstream is more than that. It also has some super nice staff, as we discovered on our recent visit, and some great food. In fact, folks I told recommended so many dishes at Mainstream that I couldn’t possibly try them all in one go.

But I did my best. 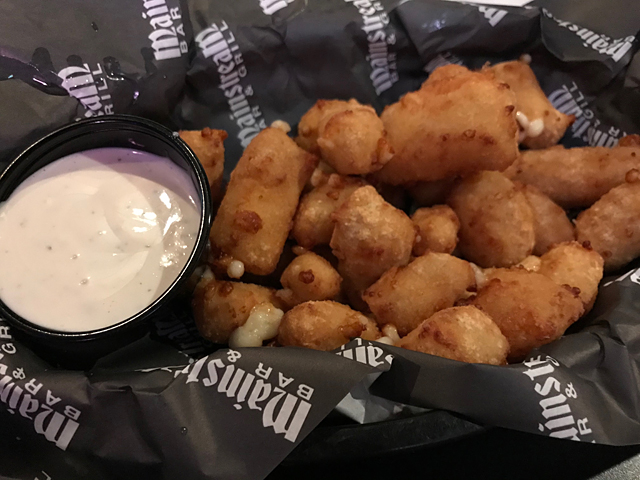 I brought along a couple folks to help me try a few things and they wanted the curds ($5.95), which arrived piping hot in a batter that wasn’t in the least bit greasy or heavy. The white cheddar cheese inside was flavorful enough that we barely touched the ranch on the side.

We also ordered a basket of wings – $7.95 for 10 is a pretty good deal – and because it wasn’t busy, they allowed me to get five of one flavor and five of another. But this is something not typically done, so don’t be angry if it’s busy and they can’t accommodate. 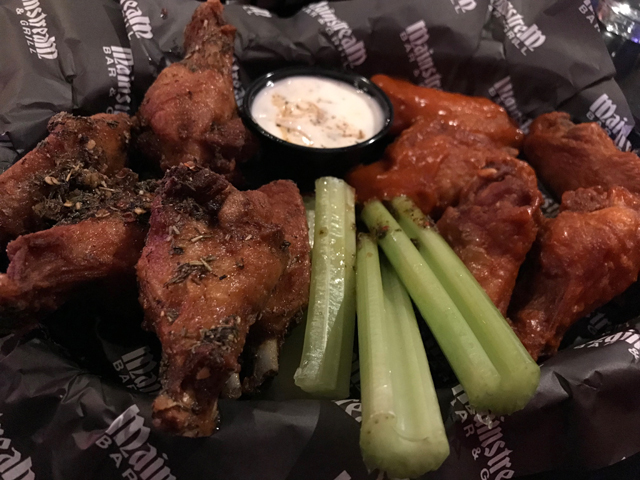 I choose the Caribbean jerk, which were spicy but not hot, and the original Buffalo, which, again, weren’t too picante. And, refreshingly, these wings were not over-sauced.

My companions went for a couple baskets (the old menu on the website, which is still accurate, called this section "For the Younger Crowd"), choosing a crispy grilled cheese and a chicken nugget basket ($7.95 each), with fries, though they could’ve opted for sweet potato fries, tots or housemade chips.

I went for the tots when I ordered a build your own burger.

The one thing that most people seemed to agree upon is that Mainstream – located in a great old Boomtown-style storefront with an eye-catching stepped gable, as well as the storefront next door – serves Waukesha’s best burger ($10.95). How could I resist?

Pretty much everything can be tinkered to your liking. You can get a half-pound burger patty, a turkey burger, a six-ounce Angus shoulder tender, a veggie burger, a six-ounce tuna steak or an eight-ounce chicken patty as your base and then add your toppings. 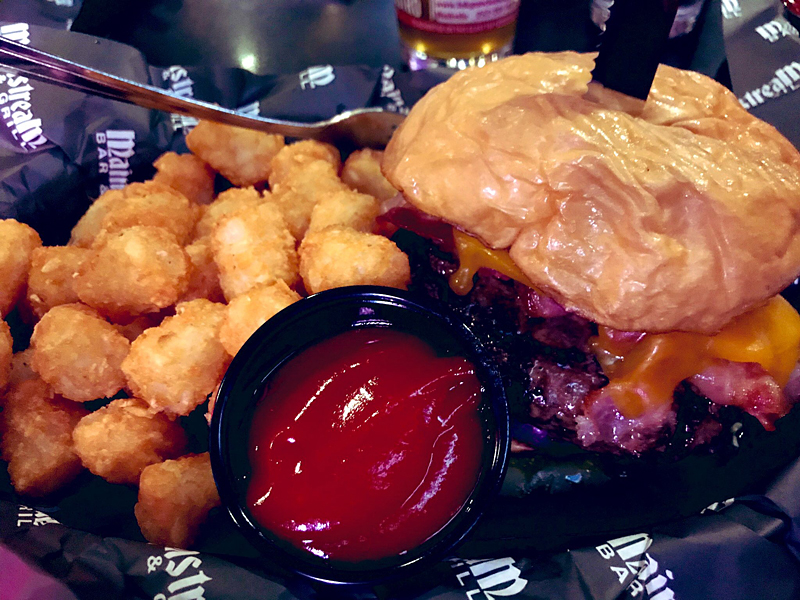 There are six types of cheese, 15 toppings – everything from tomato to corn salsa to a fried egg to peanut butter to guacamole – and another 15 dressings or sauces, including Buffalo sauce, A1 steak sauce, Cajun remoulade, Thai peanut sauce and on and on.

Did I mention you can even select your bread? Choose a bun or a garlic herb wrap.

There is no upcharge for any of the toppings and you could technically, I guess, get all of them, since there’s no limit. But don’t overdo it because the half-pound Angus burger, which I ordered medium rare, arrived perfectly cooked and was ace.

In her On the Burger Trail installment on Mainstream, Lori Fredrich said, "Mainstream's burger is big, bold and well worth the drive to Waukesha," and she was right.

When the weather is nice – it was nothing like nice when we visited just as the polar vortex was moving out at the beginning of the month – there’s a deck out back at Mainstream, which celebrated its sixth anniversary last summer. 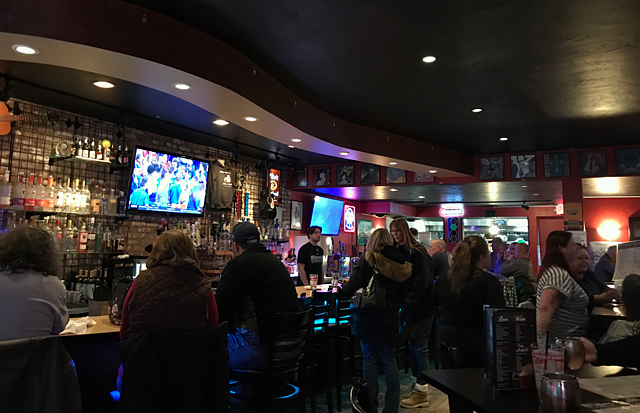 The bar and restaurant has proved so popular that owner Jon Dufek recently announced that he planned to move the kitchen to another adjoining building to free up another two dozen seats for customers.

At the moment, Mainstream seats 100, with room for 34 more outside in summer.

Of course, there is also a calendar of specials, including $5 martinis on Monday, $5 bloodys on Sunday and 50-cent wings on Tuesday and Thursday.

Keep up with the live music calendar and other events by following the Mainstream Bar and Grill Facebook page.