There's a distillery and tasting room in town where you've likely never been. And, if you have, you're part of a fairly exclusive group who have discovered one of Milwaukee's best kept secrets. Read on and learn more about Twisted Path Distillery and Dock18 Cocktail Lab.

There’s a distillery and tasting room in town where you’ve likely never been. And, if you have, you’re part of a fairly exclusive group who have discovered one of Milwaukee’s best kept secrets.

Twisted Path Distillery and its accompanying tasting room, Dock18 Cocktail Lab, are located on the Northern edge of Bay View at 2018 S. 1st St. And although GPS will get you there, finding the speakeasy-esque distillery is an adventure in itself.

When you arrive, you can park on the street or in the parking lot at the North end of the building. Then, just follow the numbers on the loading docks. You’ll find both the distillery and tasting room (cleverly named Dock18), right about where the 18th dock would be, if there were one. 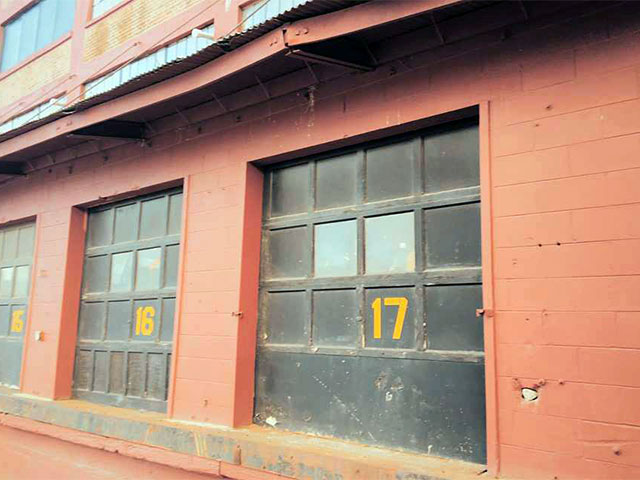 The door is locked, so you'll need to press the button on the Twisted Path intercom so they can buzz you in. Once you’re inside the intimate tasting room, you’re just a few steps away from some of the best spirits – and cocktails – in the city.

"I built a distillery where it made sense to build a distillery," explains Twisted Path Distillery owner Brian Sammons. "I wanted to be in Milwaukee, and ideally in Bay View. And the building had all the necessities, as well as space for expansion. But it was about production; it wasn’t about visibility. And, in the end, that has both up-sides and down-sides. When people find us, it’s great. And maybe being hard to find makes us seem cooler. But, at the same time, there’s so many people who haven’t yet found us."

Fortunately, there are numerous reasons to make a point of finding Twisted Path. The first is a tour of the distillery itself, which is open to the public for tours on Saturdays at 1, 3, 5 and 7 p.m.

With Sammons as host, you’ll get a glimpse into the distillery’s operations and a peek at the still which Sammons built himself, complete with a unique heating element unlike any other. 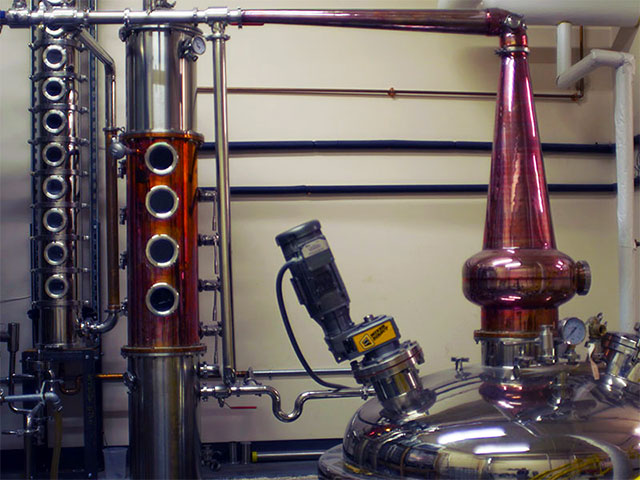 You’ll get a peek at the flavor library, an amazing collection of unusual distillates, infusions and liqueur experiments, some of which could make it to market in one form or another. You’ll also taste of all of Twisted Path’s spirits, which include vodka, gin, white rum and dark rum, as well as the occasional tipple of something extra special. 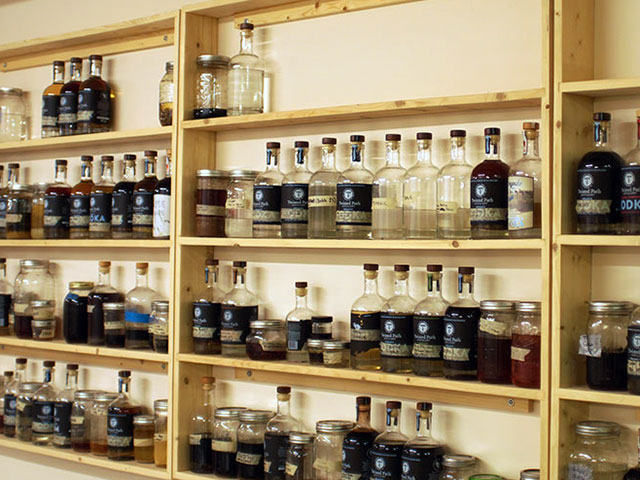 You might also get inside information from Sammons ... potentially about a new release like his barrel-rested gin, which is due to hit store shelves in the next six months. Or he might give you insights into his latest project: whiskey, a product which will be released in small batches, each possessing its own distinct flavor profile. In fact, if all goes well, an early test batch could be available for purchase at the distillery by the holidays.

Along the way, you’ll learn why Twisted Path can truly be called a "craft" distillery. Sammons started his business because he was passionate about making a superior product with high quality ingredients. Very unlike other capital ventures, Twisted Path is the story of a talented distiller trying to figure out the business, as opposed to a business guy trying to figure out how to make a decent distilled product.

The distinctions don’t end there. Twisted Path is the only certified organic distillery in the State of Wisconsin. And nationally, it is among a minority of distilleries who have made the commitment to organic production. Twisted Path is also among an increasingly small percentage of distilleries that actually make their own spirits (read more in this article published in The Atlantic).

It’s a differentiator that the distillery was built upon.

"I’ve hung my hat on the authenticity of what I do. We’re a grain to glass distillery; our products are made from scratch using raw ingredients. And they’re bottled on premise. We’re sourcing organic grains from Dolan Farms in Dodgeville. The grain is stored at Lonesome Stone Milling in Lone Rock and then milled and shipped to the distillery as needed."

And then there’s Twisted Path’s tasting room, which is not only a place to sip Sammons' delicious dark rum, but a wonderland of creativity where talented bartenders mix up some of the best cocktails in the city. 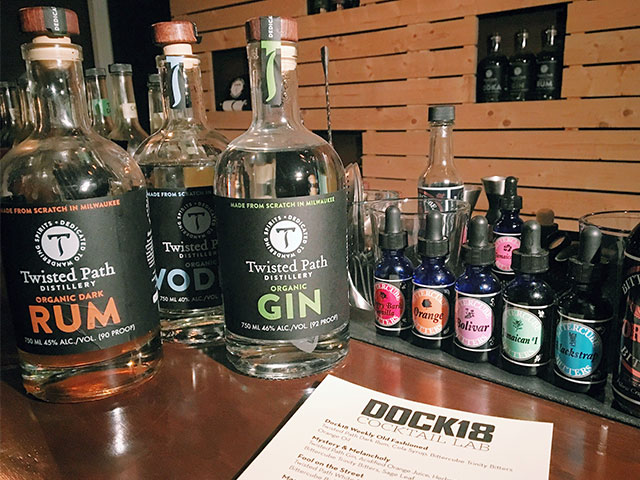 Dock18, a collaboration between Twisted Path and Bittercube, serves as a laboratory of sorts for creatively constructed cocktails using Twisted Path products, unreleased small batch spirits and liqueurs made with Twisted Path’s high proof vodka. And its location serves to drive its mystique.

"Everyone who comes in has a story to tell before they even walk through the door… whether they walked into Enlightened Brewery by accident, or circled the block looking for us," says Brandon Reyes, bar manager at Dock18. "So, it creates a level of expectation; and we have to deliver on that. If we’ve done it well, they tell friends about us. And those friends tell other friends. Almost everyone that comes through the door found out about us by word of mouth."

And the proof is in the drinking. In addition to classic cocktails, Dock18 also offers a monthly themed menu featuring creative, experiential offerings that make use of seasonal ingredients, inspired house-made syrups and liqueurs and unique presentations.

The idea for themed menus came about as somewhat of an accident.

"We’d gotten violets from a local farm to make liqueur," notes Reyes. "And the day we finished the liqueur happened to be the day that Prince died. We knew we wanted to do a Prince tribute cocktail, but as we talked we decided we needed to do an entire menu dedicated to him. The response was overwhelmingly good."

It prompted them to start thinking about changing the format to include more themes. One of the first was based on the film "Fear and Loathing in Las Vegas;" cocktails were themed by name and accompanied by an illustrated menu that depicted scenes from the film. 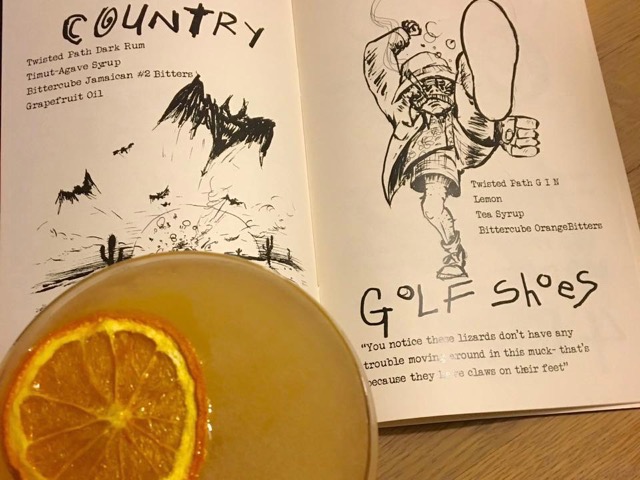 "People love that they can come in every month and have something really different," says Reyes. "And for us, as bartenders, it keeps things interesting and challenging."

Each menu finds its foundations in research, brainstorming and a visual collection of images the staff collect on the Dock18 Pinterest page. From there, it’s about creating the products needed for execution. And that means sourcing ingredients, making infusions and liqueurs and testing countless recipes.

"When we create a menu, we’re not just giving cocktails clever names," explains Reyes. "It’s a multi-sensory experience. It’s about incorporating ingredients that speak to the theme. Sometimes it’s about harnessing emotions and thoughts or triggering potential taste memories. And whenever there are visual elements that we can take advantage of, in terms of presentation, we do."

Down the rabbit hole

Alice in Wonderland is the theme for September. And it promises to be a true leap down the rabbit hole.

"It all starts with the rabbit," says Reyes. "It’s an image we’ve played with before. In fact, it was part of the ‘Fear and Loathing’ menu. And it’s an image that really speaks to the idea of what Dock18 is. You follow a white rabbit down a hole and you find yourself in a pretty crazy, unexpected place." 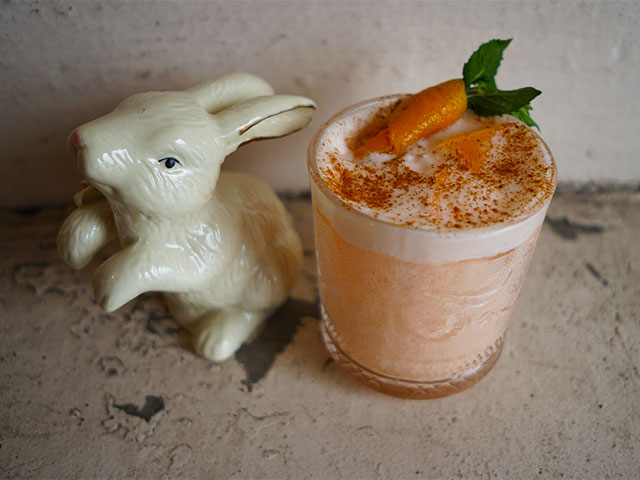 A second drink follows Alice down the hole, where she happens upon a little door that she can’t quite fit through. Nearby she finds a small vial that says "drink me," and subsequently a small cake that says "eat me."

"When we compose cocktails," notes Reyes. "They’re generally a combination of references pulled from source material for the theme and various flavors or styles of cocktails that are inspiring us at the moment."

The cocktail – aptly named "Eat Me Drink Me" – incorporates both elements. Made with Twisted Path dark rum, housemade banana vermouth, housemade nocino (green walnut liqueur) and Bittercube Cherry Bark Vanilla bitters, it drinks like a Manhattan while mimicking elements of the flavor description of the elixir in Lewis Carroll’s novel, described as tasting of "cherry tart, custard and toffee."

In keeping with the "Eat Me" premise, the cocktail will be paired with a chocolate bar from Melt Chocolate, a chocolatier whose production facility is located just steps away from Dock18 in the Lincoln Warehouse. 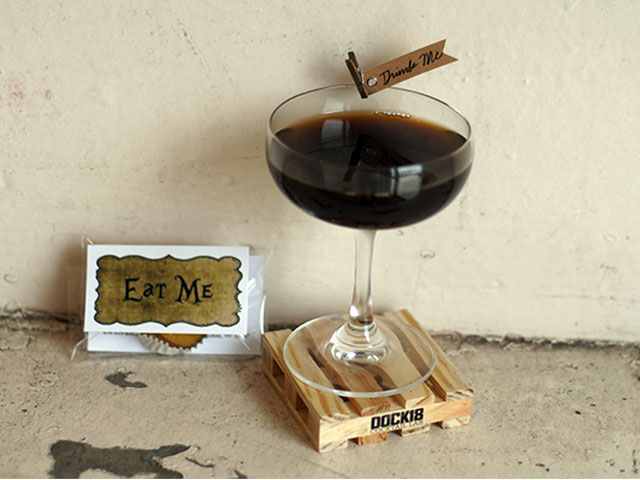 A third drink conjures the spirit of the smoking caterpillar. It’s essentially a deconstructed Bloody Mary. But, it’s not like any you’ve tried. High proof Twisted Path vodka is infused with a combination of botanicals and tomato and then combined with clarified tomato, citric acid and Marvel Bar bitters, a soon-to-be released collaboration between Bittercube and Marvel Bar in Minneapolis, Minnesota. 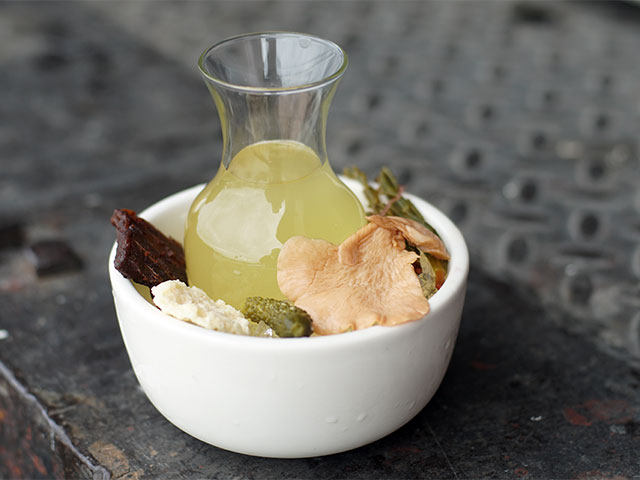 The cocktail is startlingly clear and it’s presented atop a bed of whimsical greenery and garnishes alluding to the lair of the smoking caterpillar, who sits atop his mushroom in the lush forest, asking over and over again, "‘Who are you?"

And "What are you?" is an apt question; after all, the cocktail evades identification as a Bloody Mary, and yet aptly captures the essence of the drink in its flavor profile.

Dock18 is open Thursday 5 p.m. to midnight, Friday 5 p.m. to 1 a.m. and Saturday from 1 p.m. to 1 a.m. Twisted Path Distillery is open for public tours on Saturdays at 1, 3, 5 and 7 p.m. Reservations are recommended for both tours and the tasting room and can be made at dock18mke.com.