If you've ever lingered at the stoplight where Forest Home meets Oklahoma Avenue, you may have spied the sign for Una Cafe, a tiny corner bar with a loyal clientele and a reputation for its vibrant, welcoming ambiance.

If you’ve ever lingered at the stoplight where Forest Home meets Oklahoma Avenue, you may have spied the sign for Una, a tiny corner bar with a loyal clientele and a reputation for its vibrant, welcoming ambiance.

The bar, located at 4410 W. Forest Home Ave., is about a half-mile from St. Sava Serbian Orthodox church in a neighborhood often referred to as Serbiatown. Founded by Pete Djilas in 2000, Una was named for the river of the same name which sweeps through Croatia, Bosnia and Herzegovina. 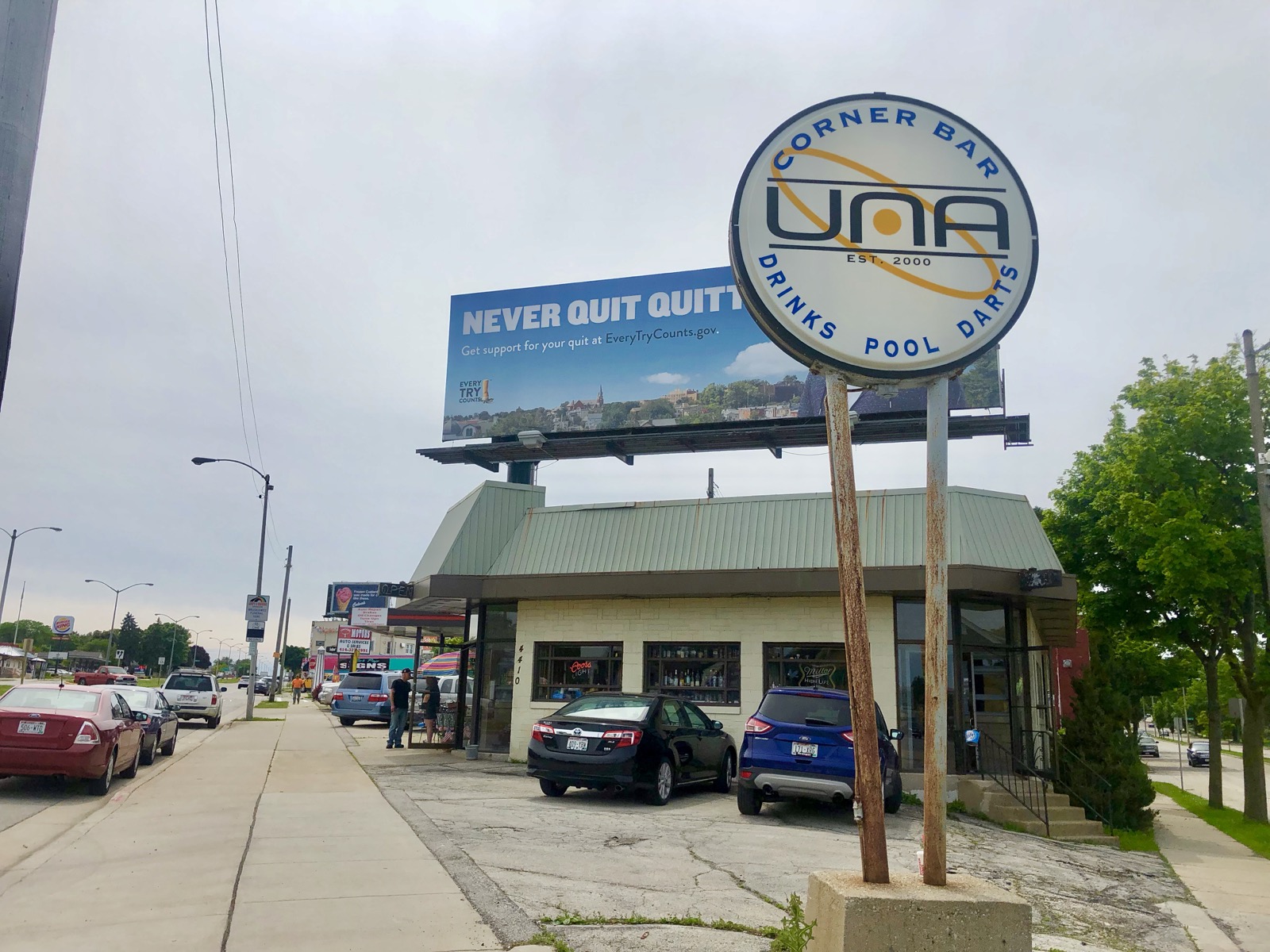 "Before I started working here, the bar was legitimately a Serbian bar," notes Peaches Seguin, who has worked at Una since 2004. "They had a Serbian jukebox with CDs that played Serbian bands. But I think what happened as time wore on, is that the owners hired bartenders. And, as they stepped away from operations, the bar gradually became more and more American." 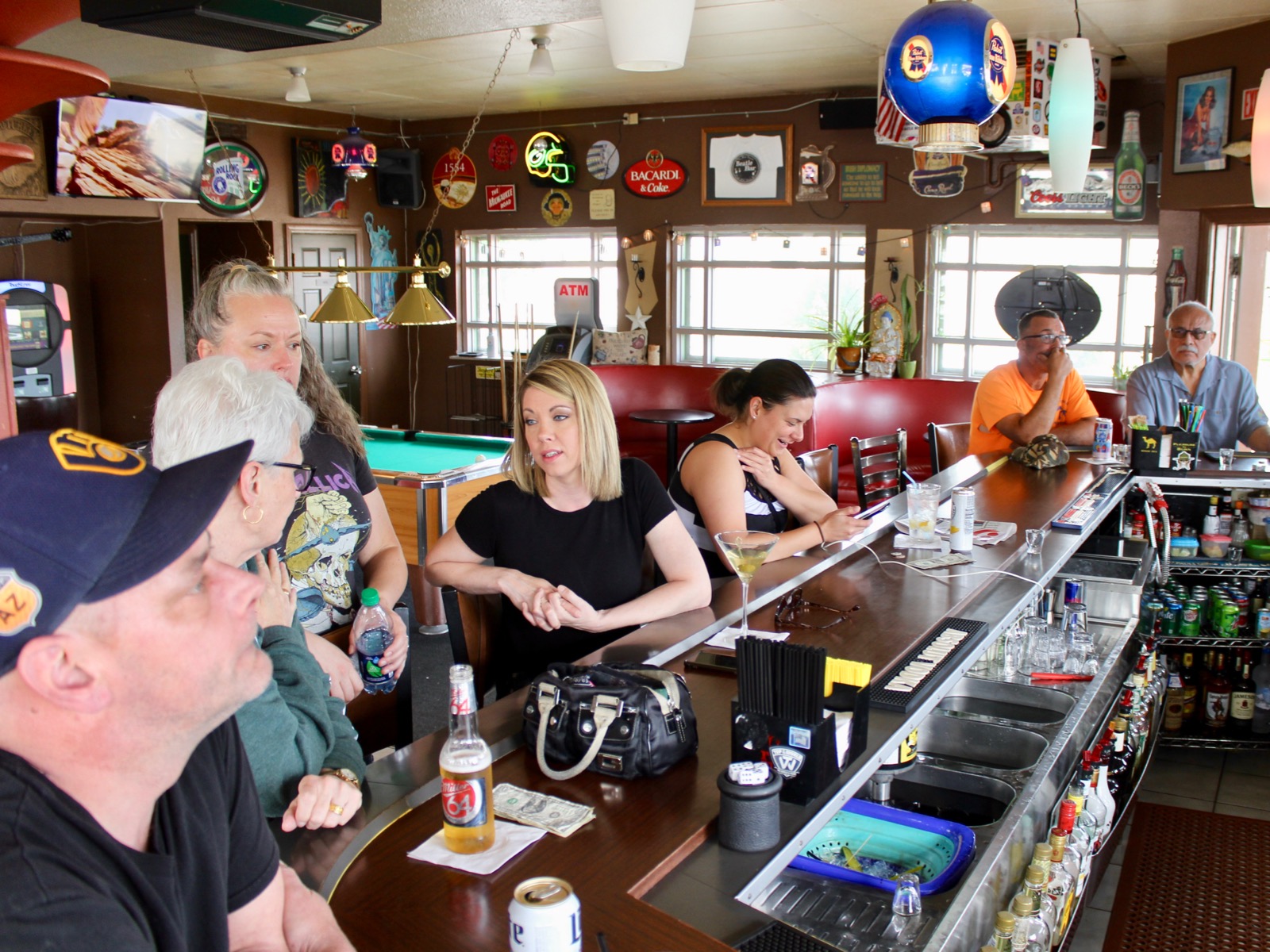 By the by, the Serbian music was replaced by a diverse collection of records ranging from The Beatles to Nine Inch Nails.

"We were known for having the best jukebox ever," Seguin recalls. "And the day we got rid of our CD jukebox and got a digital one, everyone was so sad. I actually cried a little. But you’ve got to keep up with the times."

These days, Una is still powered by music.

"We have a thing we call Una-Robics," notes longtime bartender Colleen Santner. "You get to dancin’ and you’ll be feeling it by the end of the night ... I always joke when it’s hoppin’ that I’m working at Club Una."

Arrive at Una during the warmer months and you’re likely to find folks sitting outside on the bar’s cozy patio, a space which serves as both a smoking porch and confessional for guests and employees. 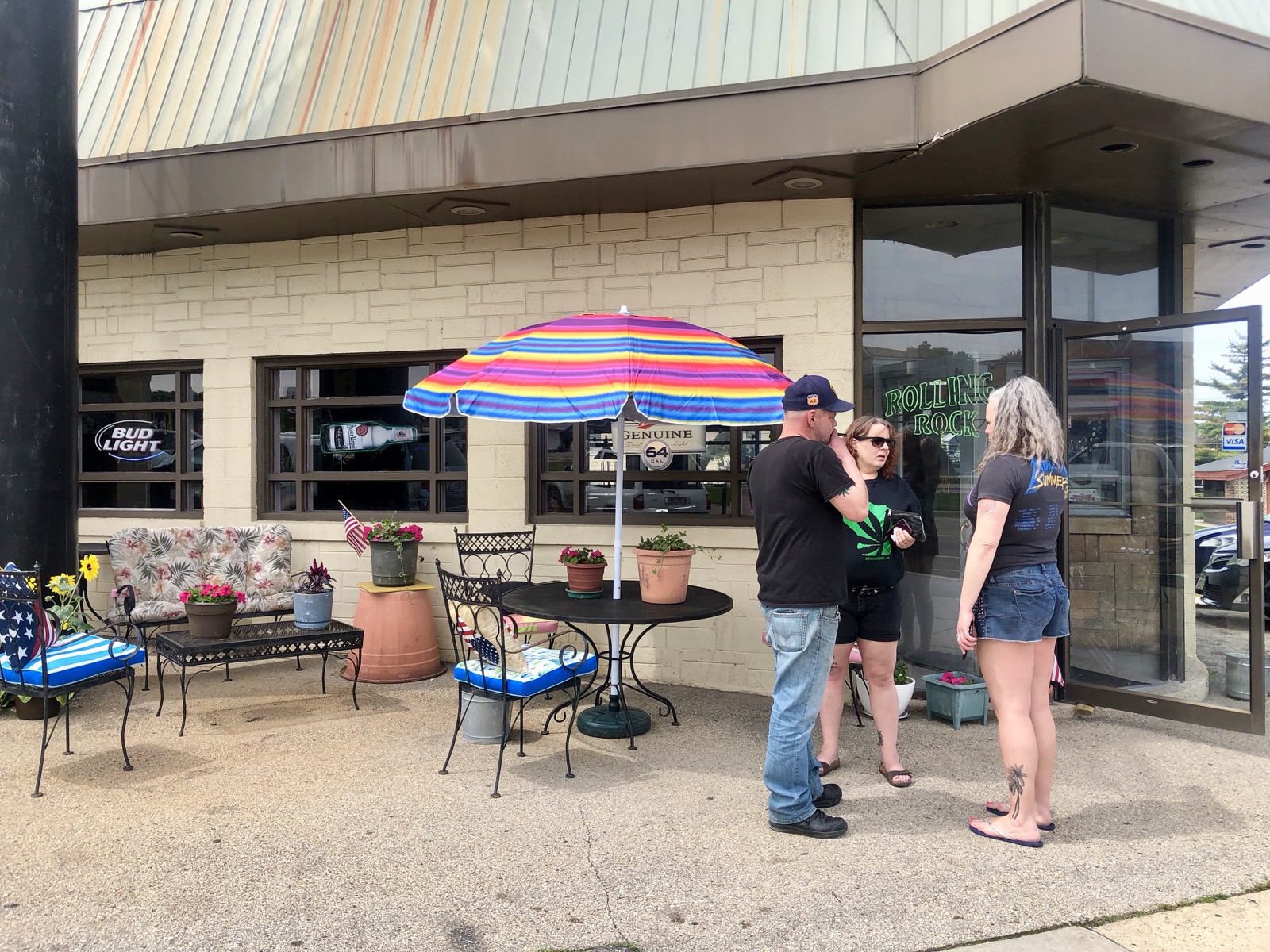 Inside, you’ll find regulars sipping their drinks and chatting with Seguin or one of three other full-time bartenders including Santner, Teresa Gonzalez and Allie Quisno, most of whom have worked at the bar for six years or more.

"You’ll see everyone at Una," says Seguin. "Young to old, every color in the rainbow. And everyone who lives in this neighborhood comes to either Una’s or Sobo’s Tap [a bar just steps away across 45th Street]"

Regulars might spend their night sitting at the bar. Or they might play darts or pinball in the back or take turns shooting rounds of pool at the bar's well-maintained pool table. 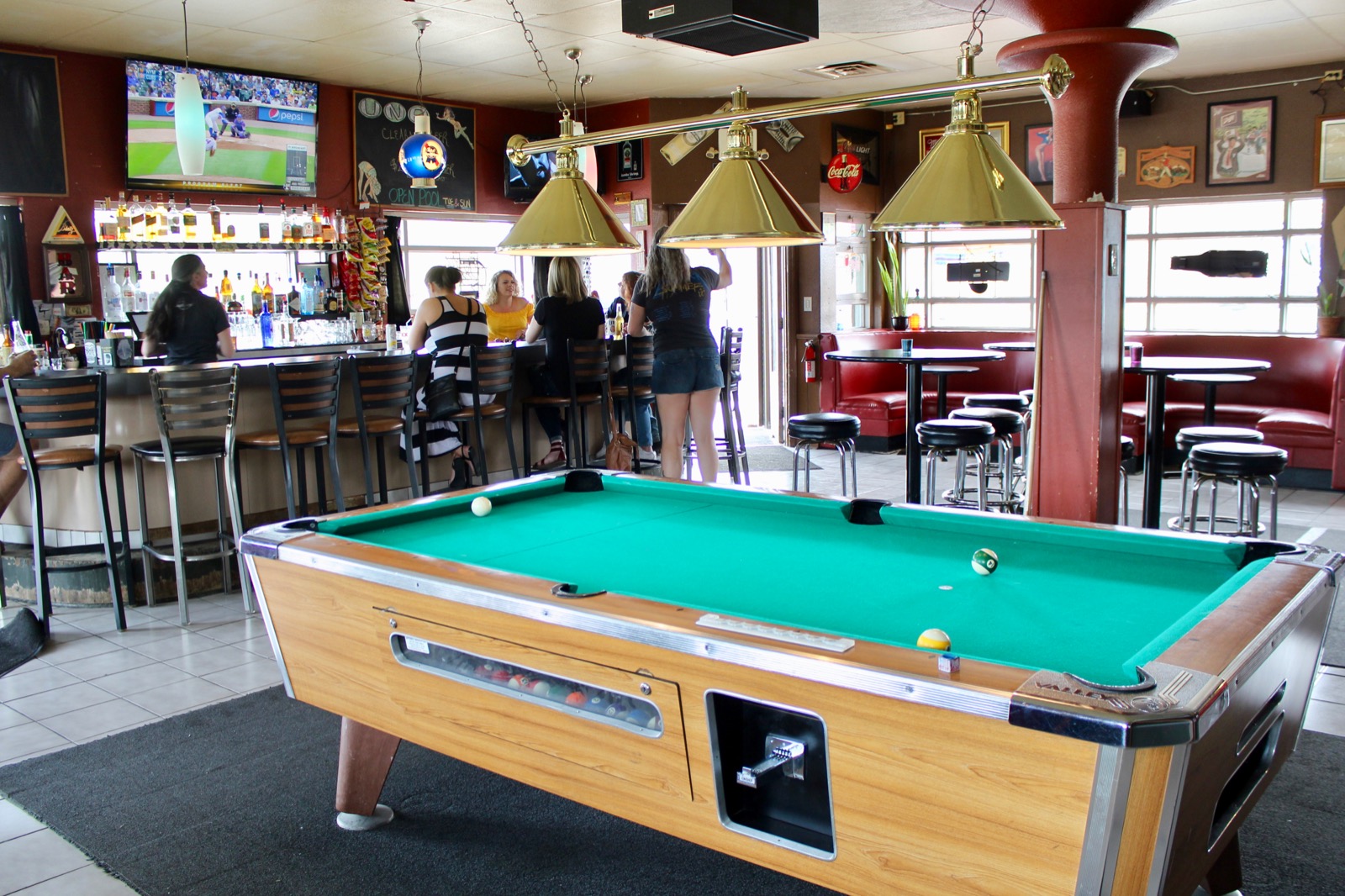 "Being a South Side Bar, you’d think it would get a little rough here," remarks Santner. "But people really look out for one another, and they look out for us. Sometimes I work here and it’s a room full of guys, and I’m the only girl. But I’ve never felt so safe.

"And that’s the place we want this to be. This place is all about positivity and kindness. We don’t care who you are or what you look like. We want you to have a good time when you’re here … Everybody has bad days, but we’re all about spreading the love. There’s just not enough of that in the world." 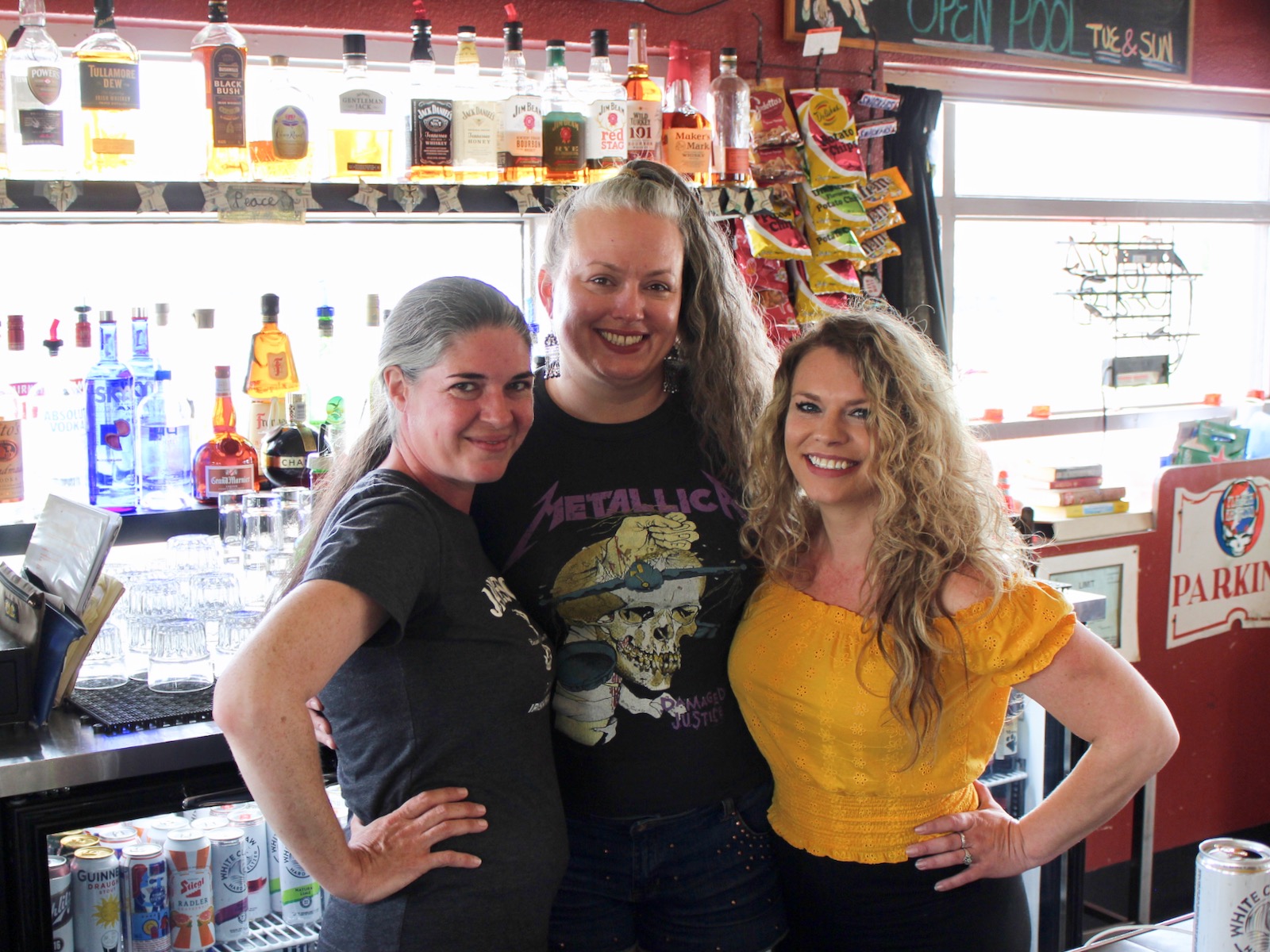 It’s a sentiment echoed by regulars including Mandy Barber, who visits regularly after work.

"I’ve probably been coming here for 12 years," Barber says. "I used to work second shift and we just randomly stopped in here for a drink. Now I know all the bartenders, and I’ve forged so many random friendships here. This is the only bar in Milwaukee where I can go by myself and feel really safe."

Emily Teufel nods. She’s a regular who can be found at the end of the bar sipping Bacardi Limon and Coke or shots of Black Haus. "I love it here," she says. "I can come here alone and I just feel safe. It’s homey; people look out for each other. Everybody gets along here. It’s great."

Oh, and despite the fact that the bar once had "Cafe" in its name, Una doesn’t serve food. But it’s a popular place for festivities, including their annual chili cook-off and Packer games, during which regulars provide a veritable buffet of delicious food.

"We used to do simple things like sloppy joes, subs … during the games," says Seguin. "But now customers sign up to bring things. And it’s like a big competition. We’ve had roasted pig, chickens roasted on a rotisserie. Everyone is always trying to outdo everyone else."

Bring your sense of humor

The bar, meanwhile, sports the imprint of both its employees and guests, with walls that sport a variety of paraphernalia, from stereotypical signs advertising beer and spirits to more personal (and sometimes whimsical) items donated to the bar over the years. 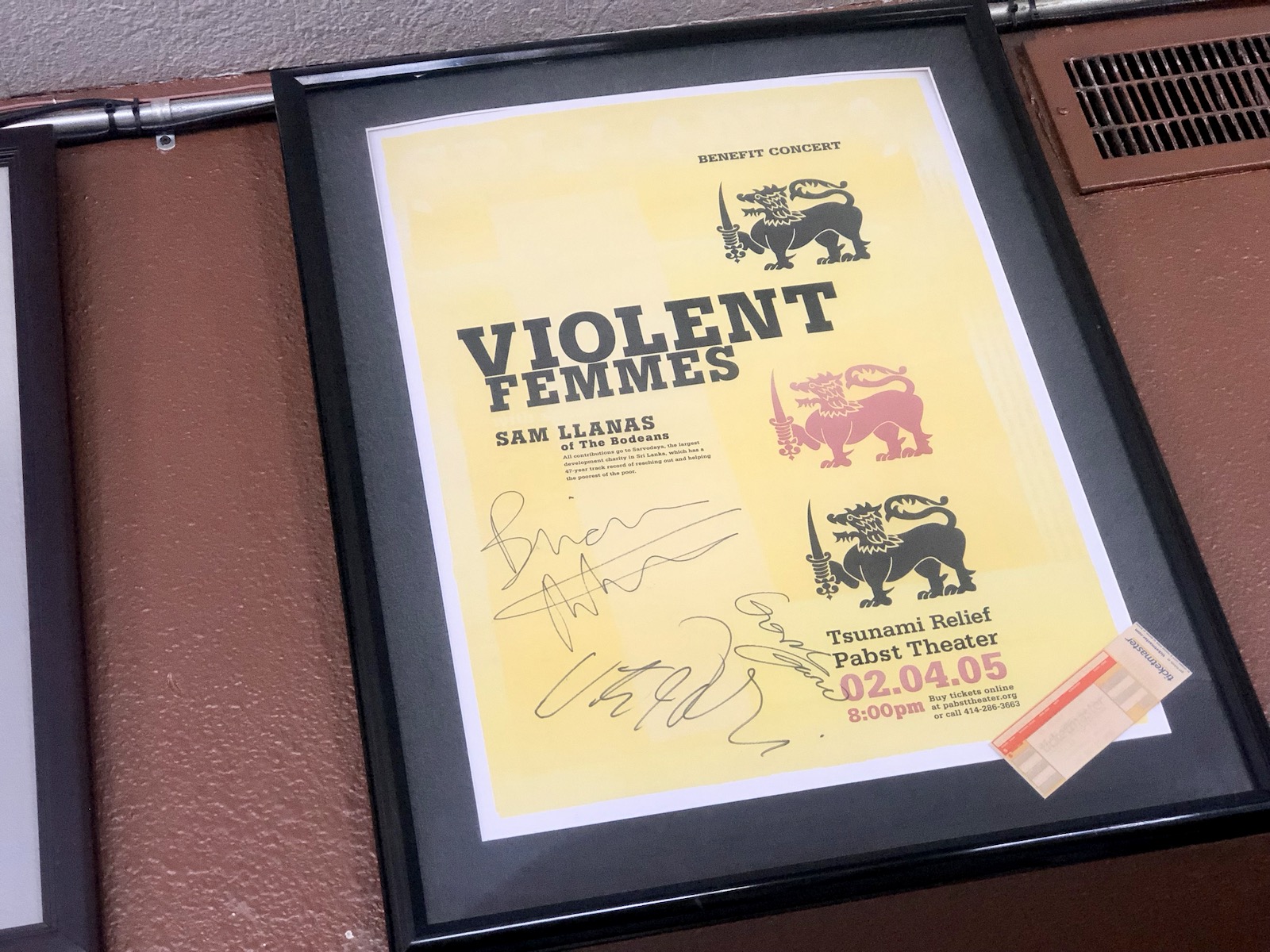 "A friend of mine plays with the band, so we gave it to him and the entire band signed it," Seguin recalls.

Meanwhile, porcelain Buddhas (donated to the bar by regular customers) sit happily above the round red booths, a hold-ver from the days when Una Cafe was a Chinese restaurant called Jade Forest. 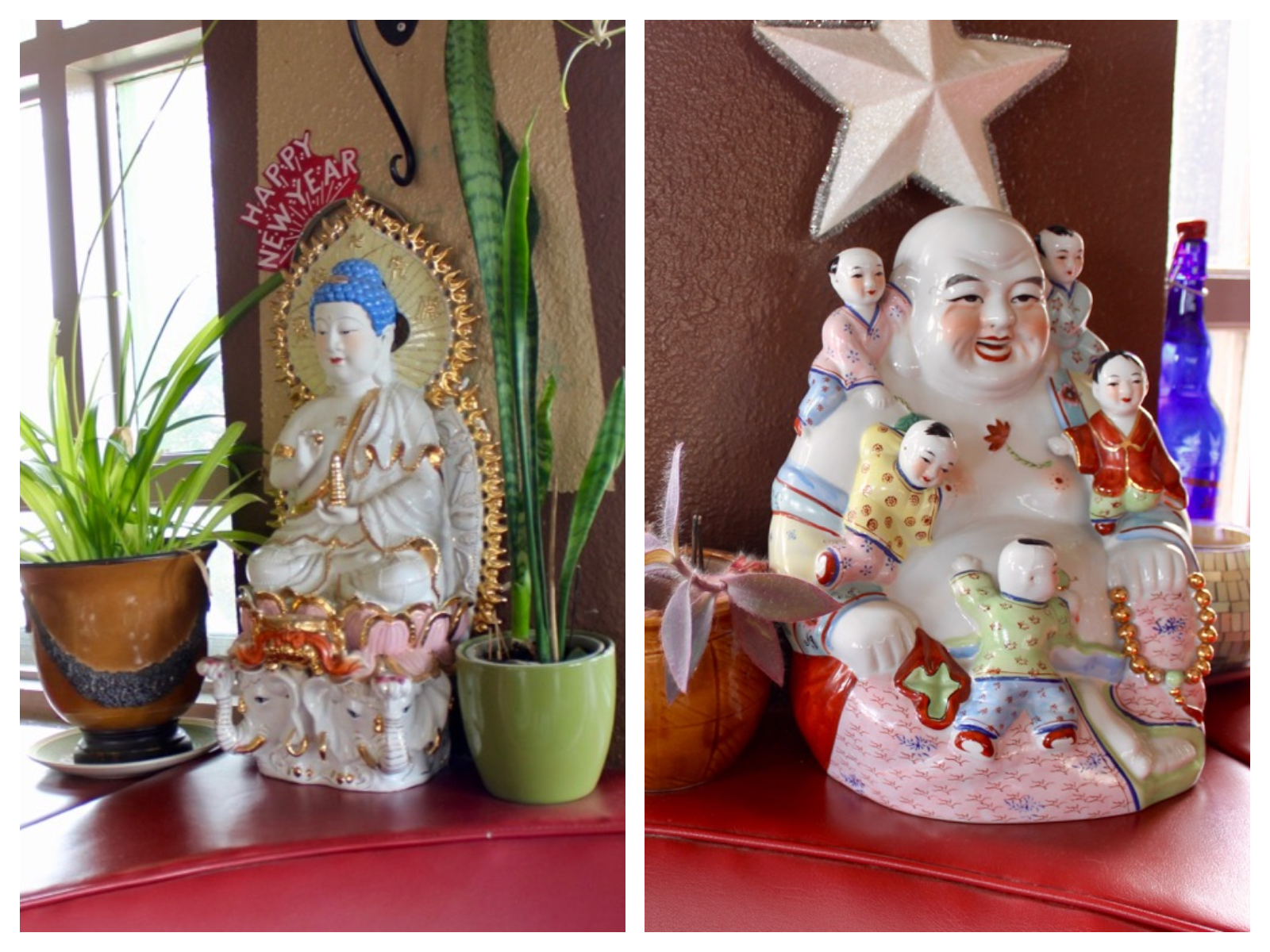 "Oh, yeah," says Santner with a chuckle. "And the ‘Do Not Hump’ sign near the bar … that’s really important." 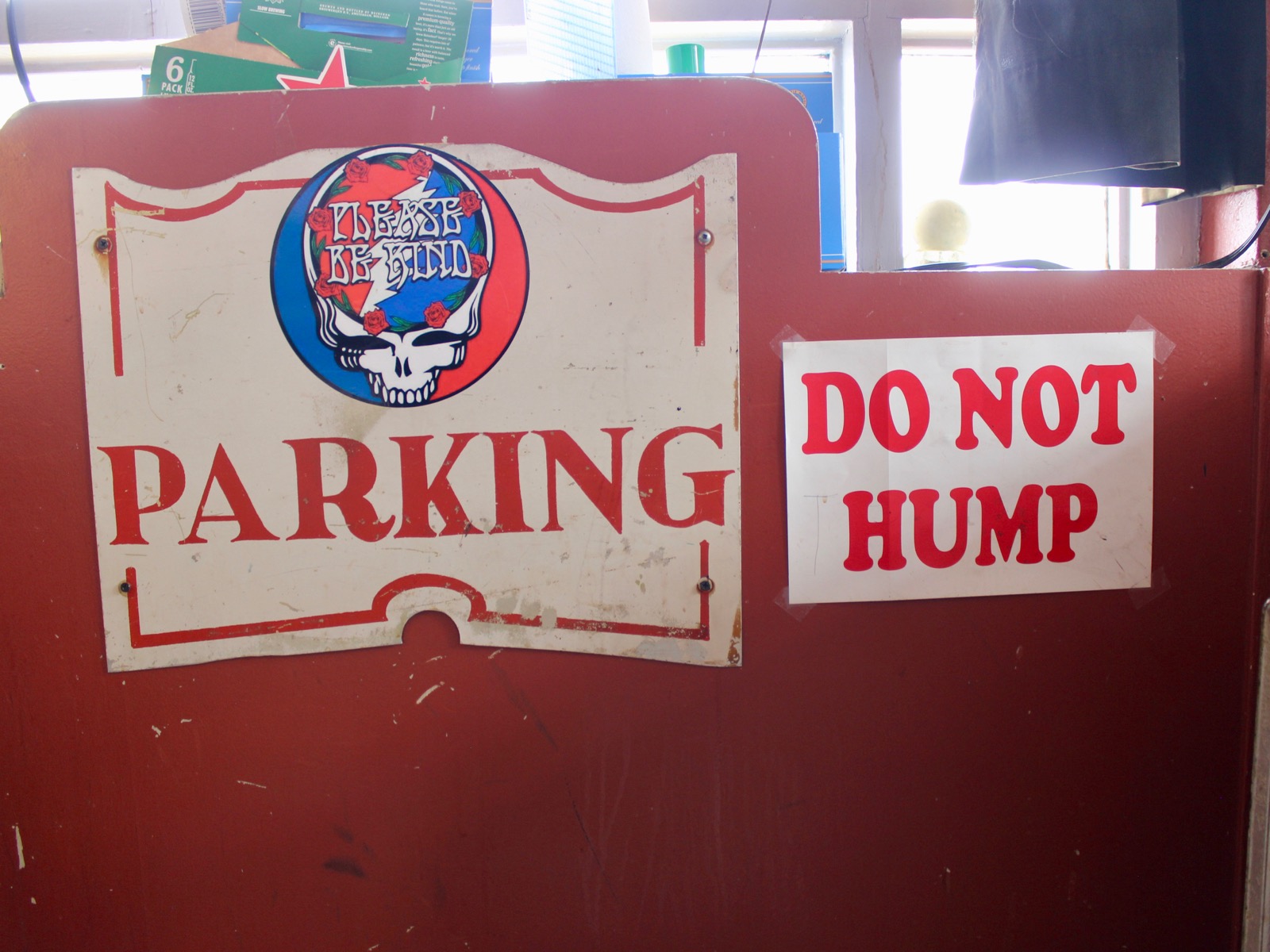 A healthy sense of humor is a requirement at Una, says Seguin, who excitedly runs to the back of the bar, disappearing into the storage room and returning with a mischievous looking camel with skin made of leather.

"This is Trent," she says. "He’s our camel that we bring out and decorate for Christmas. We wrap lights around him now because people were always trying to steal him." 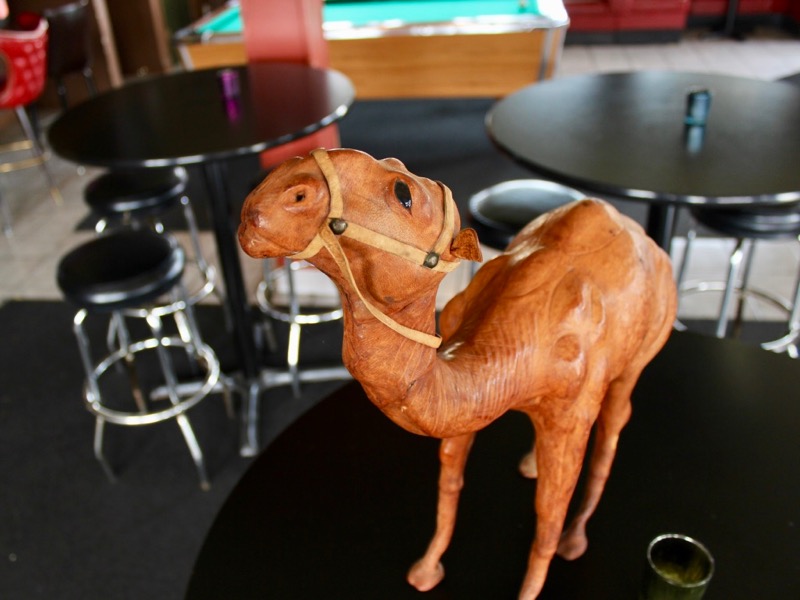 And the collection of ponies, horses and other figurines up at the bar? There's a story there ... but you'll have to ask Seguin or Santner about that one. 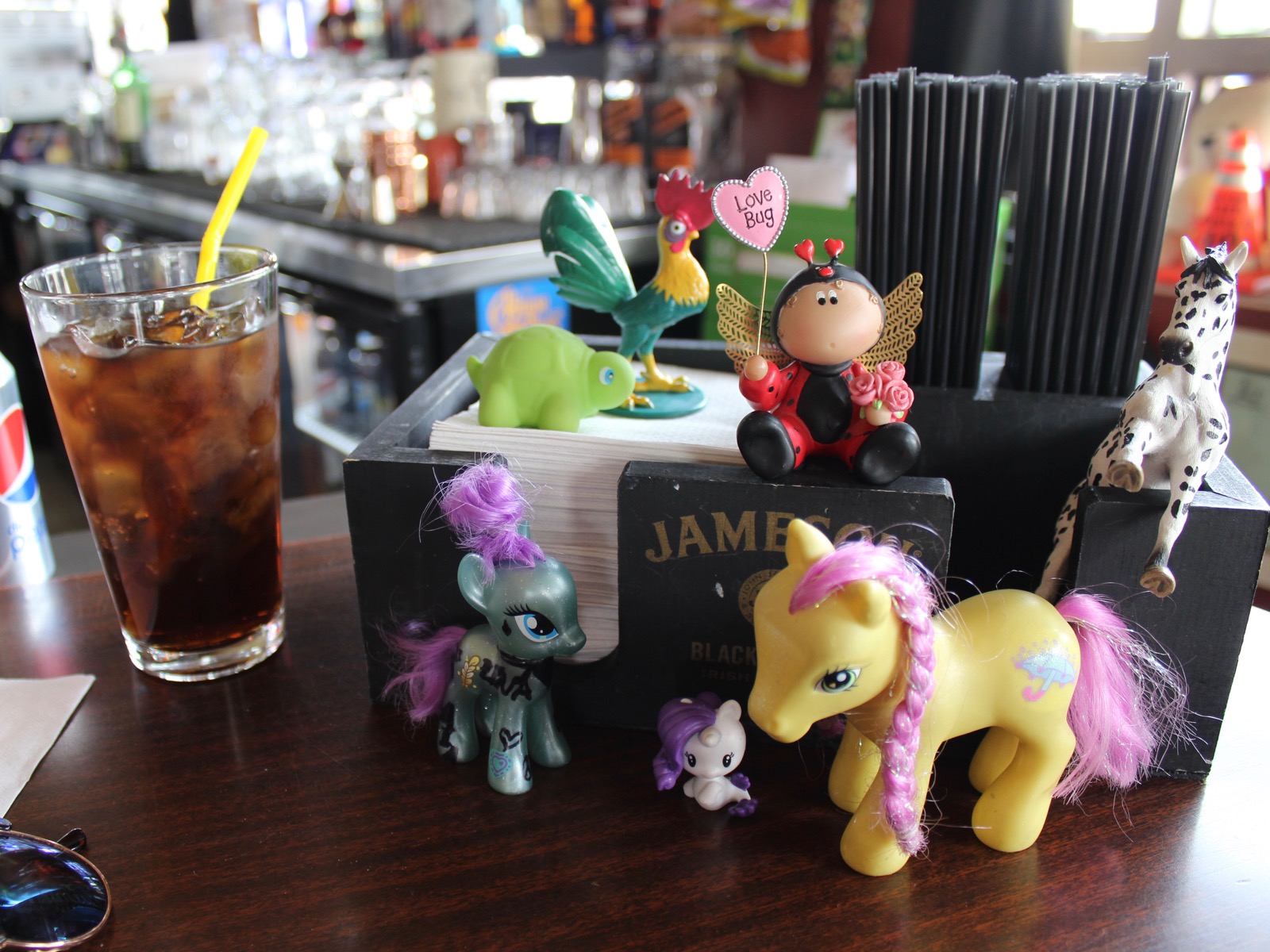 You won’t find beer taps at Una, but the bar has a great collection of bottles and cans, including a large selection of craft beers and a good showing of local brews. Seguin says turnover is good on beer, but regulars know to watch for "clearance sales" on seasonal brews when they clean out the cooler. 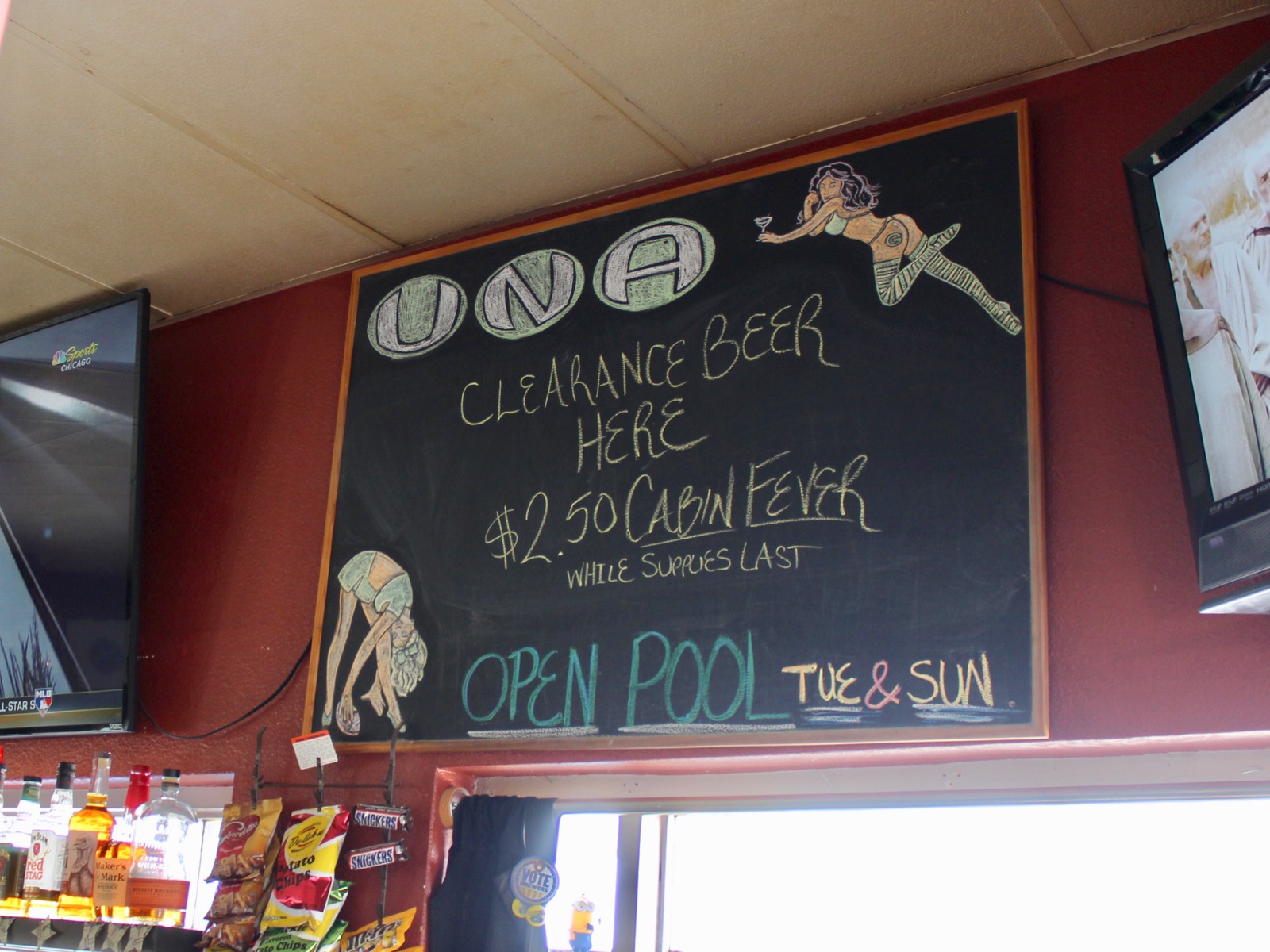 As for cocktails, the bar is small but stocked, and folks can find just about anything they’d like from mixers to margaritas.

"We make everything from scratch," notes Seguin when I ask her if Una is known for a particular drink. "We don’t do fancy hipster purees. But we have fresh mint growing outside. So, we make mojitos. And we make our own Bloody Mary mix."

Santner smiles. "I would consider myself to be the Bloody Mary Queen," she says, noting that most of the bartenders have their favorite specialty drinks. "People come in special to see Allie [Quisno] because of how she makes her old fashioneds."

She turns to Quisno, who explains.

"I put the bitters in the glass first and then light them on fire," Quisno says, picking up a glass and coating the interior with bitters before pulling a lighter out of her pocket to set it on fire. "There’s a little drama to it, but it also adds an aromatic element. And lately I’ve been straining it. So I do bitters, sugar, cherry, orange and a splash of soda, muddled, iced, shaken, poured into a glass and topped off with sweet, sour … whatever they want." 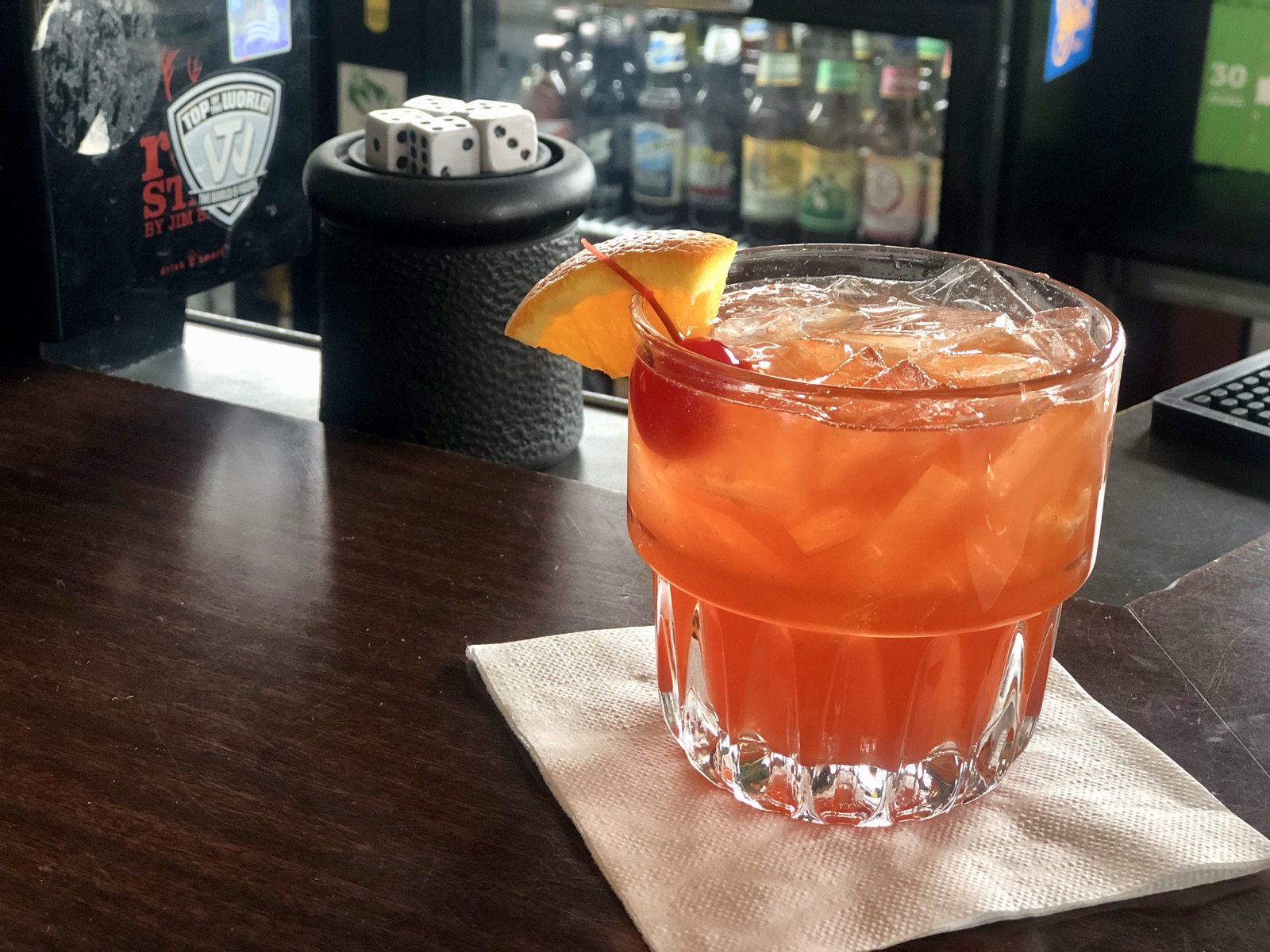 Of course, if a patron wants drama, all they need to do is ask for an Una specialty: the Campfire Shot.

"We layer Kahlua, Baileys and Yukon Jack," says Seguin. "You light it up and sprinkle cinnamon on it so it sparks … and the crowd goes wild."

"When it’s dark and you do like ten at a time, people are like ‘Wow, how did you do that?’" Santner adds with a mischievous smile. "And I just say … ‘I’m a witch.’"

A regular overhears Santner’s remark and bursts into laughter.

Santer smiles. "One of our regulars made a comment 10 years ago … ‘Una-tics Unite!’ And it’s stuck. We’re all unatics here."

Una Cafe is open Monday through Thursday from 2 p.m. to close and Friday through Sunday from noon to close. You can also follow the bar on Facebook.