Within one second of walking into Bosco’s on Burleigh for the first time, I already felt like a longtime regular.

Admittedly, I happened into the Riverwest bar, found at 1000 E. Burleigh St., right in the middle of an excitable conversation about movies – my ideal social situation. But that’s just great timing.

It’s what happened after – the atmosphere immediately encouraging you to effortlessly hop into a debate amongst complete strangers in a strange place and then suddenly find yourself bounding from topic to topic and swapping fun anecdotes as though you’ve known these people and these walls your entire life – that makes Bosco’s a great bar.

"Everybody knows everybody; it’s a place to come, talk to your friends and forget your troubles from your rotten day or the rotten weather," said Debbi Popanda, a longtime friend of Bosco’s owners who’s graduated to bartending over the past few years. "It’s not a clique crowd. Anybody here will talk to anybody at any time."

Bosco’s exterior somewhat belies the friendliness waiting inside. The bar’s lone sign is still standing after more than 30 years in business … but barely. The name is legible but the design behind it is now a weathered mystery. Maybe it’s a police badge? Or a map of the city? (The correct answer is a baseball.) Then there’s getting into the bar itself.

Like fellow Riverwest neighborhood tap mainstay Gee Willickers, Bosco’s has a buzzer-activated front door as a robbery deterrent. But entry is still as easy as merely showing up.

As soon as you’re welcomed through the door, though, you’re welcomed into Bosco’s extended family. Upon a second visit on a rainy afternoon, I didn’t arrive to another movie conversation but I did find the same friendly, conversational vibe, eager to talk with anyone about anything, ranging from local gossip (the hot topic, in this case, was the naming rights for the new arena) to personal histories and everything in between.

By the end of the trip, I felt like I knew all my fellow patrons, that they knew me and that we’d be picking up the conversation right where we left off next time – all in a little over an hour. 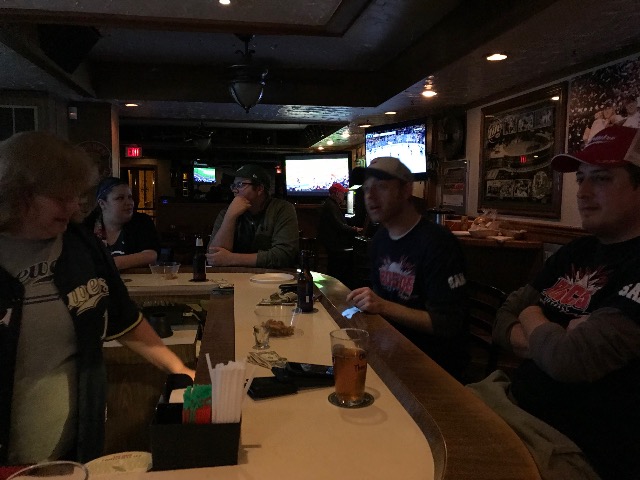 "Our friends are our friends. We used to joke that we needed a flowchart of where and how everyone’s doing. Because if somebody’s not here, we’re concerned," said Natalie Fragassi, who’s co-owned the bar with her husband Louis for more than three decades.

The decor shares the same warm vibe with its clientele. Bosco’s on Burleigh is by no means flashy – it’s definitely just a neighborhood tap – but it’s comfortable and cozy like a friend’s basement. The space is essentially split in two, with most guests gathering at its tight U-shaped bar, surrounded by TV showing the day’s big games and assorted photos and paintings of the Brewers and Packers.

For those looking for a little more privacy or leg room, the main bar space opens into a dim but far from dingy dining hall area with a smattering of tables and chairs as well as some bar games and an ATM (very useful, considering Bosco’s is cash only).

The aesthetic shifts a bit as well from man cave to trophy room, sports memorabilia traded out for plaques almost literally wallpapering the space, all earned on the baseball diamond. There, Bosco’s has sponsored several bar softball teams – up to 15 in some years – with the shiny golden honors scattered across the bar to prove it.

"We’ve supported our Milwaukee Parks System," Fragassi laughed, "and we’re one of the smaller bars." 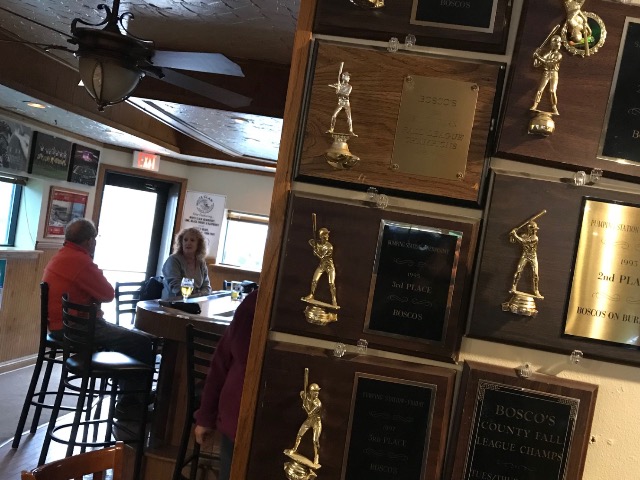 It’s a fitting – if completely accidental – tribute to Mr. Baseball himself, Bob Uecker, whose family owned a gas station during the ’30s in the backyard of where Bosco’s now calls home. It was around that time when the building first evolved into a neighborhood bar – and it’s stayed that way ever since, previously The Brass Lantern before the Fragassis purchased it in 1985.

Both had hospitality in their family history – Louis’s father owned Gino’s just a block over by the current Art Bar while Natalie’s grandmother owned the former Brady Street restaurant Beyond the Sea – so when the two were looking for something to invest their time in besides a boring day job, the answer was obvious.

"My husband and I have been married 34 years, and the year we got married, we didn’t know what to do professionally," Fragassi recalled. "My husband was a rock musician, and I worked for Blue Cross/Blue Shield, so when we got married, I was like, ‘I don’t like working 8 to 4:30.’ So when this place became available, we thought it would be easy and convenient. And we’ve been here ever since."

And 34 years later as of May 5, their little passion project and wedding gift to themselves is still there, named after the nickname given to Louis by his grandmother – Louis Bosco – for reasons adorably up for debate.

"He has his tale; I have mine," Fragassi joked. "Mine is that he liked the chocolate syrup. He says, ‘No, my grandmother just called me that.’"

No matter the case, the name has stuck around – and so has the bar, building a community with free food cooked daily by Natalie, a cribbage league in the fall, a fantasy football league that’s been hosted by Bosco’s since 1991 (and has charmingly stuck with the low-tech, in-person bulletin board drafts and scoring style of the era) and a crowd of welcoming, chatty locals who are welcoming in a way that’s signature Milwaukee.

"We’re a little more sociable or at least open to chat with strangers for a bit of time," said Ben Cabot, a Bosco’s regular since moving to the neighborhood from Seattle three years ago. "People are just a little bit less open in Seattle. They’re at the bar with their group of friends, but it’s hard to intermingle sometimes. Everybody knows each other here."

"We’re just full of love here," Fragassi added. "People come in here, and they become our friends. No matter if they move away, they still come back here.

"Debbi, as an example, lost her husband, and we’ve all been there to support her and be friends with her and love her. Celebrating birthdays, babies, baptisms, marriages, anniversaries, deaths – we’ve done it all, because we’ve known each other so long and we all have happy times and we all have sad times."

After more than 30 years on the same corner, they’ve seen it all at Bosco’s, too. The bar has seen the Riverwest neighborhood around it change and evolve, and it’s seen itself do the same. For instance, while Bosco’s once sponsored up to 15 baseball and softball teams, this year, it’s down to just one.

"We’re all getting too old to play baseball or softball anymore," smiled Popanda, also noting the nights are little quieter now while as the neighborhood regulars age and come in earlier. The Fragassis also both on the cusp of turning 65 and sending their son off to college – and, in Natalie’s case, joking (maybe … ) about trying to stop herself from following him to wherever he chooses to go.

But Popanda also says they’ve grown a new younger audience over the past few years as well, while Fragassi has no plans for the future other than continuing toward it with its regulars old, new and walking through the front door for the first time.