The thin green sign out front of Maverick's claims the South Side pub is "where you're a stranger only once." But anybody who's walked through the bar's doors knows that's not just a cute slogan. It's the actual way of life inside Maverick's.

The thin green sign out front of Maverick's claims the South Side pub is "where you’re a stranger only once." But anybody who’s walked through the bar’s doors at 2030 W. Howard Ave. knows that’s not just a cute slogan. It’s the actual way of life inside Maverick’s, one of the warmest and most welcoming bars waiting to be found in Milwaukee. 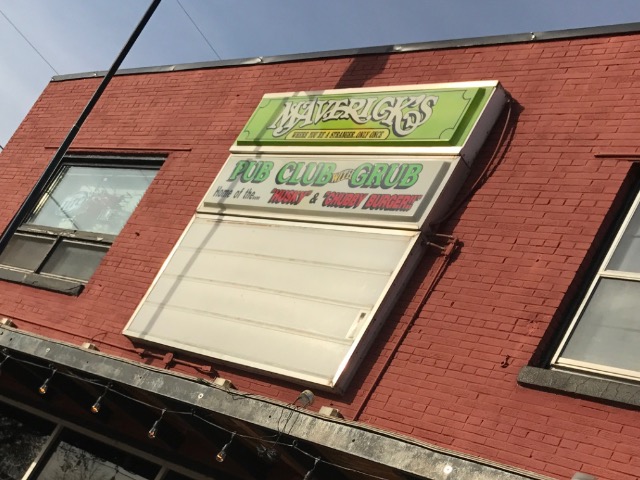 Upon my own first visit, it took all of maybe a minute before I already felt like a mainstay. Two pleasant folks from the other side of the main horseshoe-shaped bar began striking up conversation almost as soon as my rear hit the stool, talking about the day’s sports action and how I looked just like their niece’s cousin.

Further down the bar, several friends were debating the Wisconsin Badgers current playoff ranking, right next to a group happily celebrating a regular’s birthday, all of the conversations and clusters of people intertwining and integrating one another into their good times.

It’s an easy cliché, but when people describe their favorite bar like Cheers, where everybody knows your name, they’re thinking of a place like Maverick’s.

"Once they come in, we try to intermingle with everybody and get to know them so they feel comfortable coming in – even if it’s just by themselves," said Carol Peterson, who owns the bar with her husband, Todd. "We’ve been just blessed. We’ve got good people – from neighborhood people to people who travel from Chicago to come here. We’ve been truly blessed." 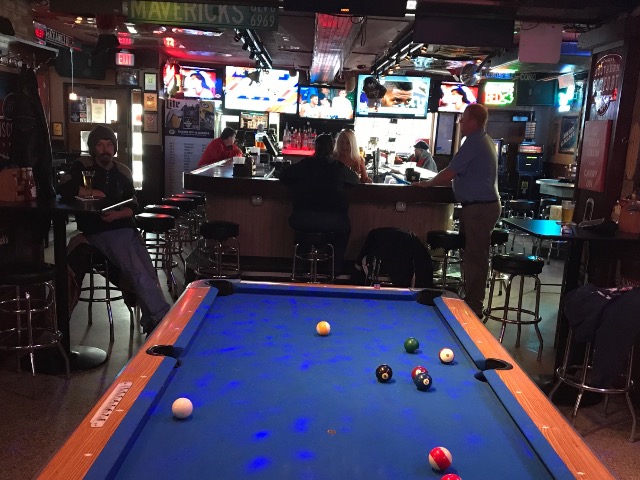 And they’ve been blessed for over two decades now. The Petersons, along with a third partner, originally opened the bar back in June of 1994. The couple had more than 35 years of bar experience combined at the time, so they figured it was time to follow their dream and open their own place – preferably on the South Side where Carol grew up.

They looked at a few potential places before landing in the current spot, the former home of Jim’s, another mom-and-pop neighborhood mainstay – opened in the ’50s – that Carol even had memories of visiting as a little girl with her dad after church. With a good location and even better memories, they bought the special spot and gave the place its new name – with the help of "a lot of Jack Daniels," according to Carol.

"I worked at Amelia’s, and we were watching ‘Maverick’ on television, and we thought it was a really cool name," she recalled, laughing.

The cool name only, however, hints at the cool atmosphere awaiting inside, as the walls are filled to the roof with fun signs, knickknacks, trophies and amusing jokes – mostly donated by customers over the years. Wedged in between the bar’s several sports-dedicated televisions, there’s funny license plates, ranging from the cutely amusing to mildly profane, to a mangled Chicago Bears stuffed animal hanging from the ceiling (self-explanatory) and a wild boar head mounted on the wall (a little less so). 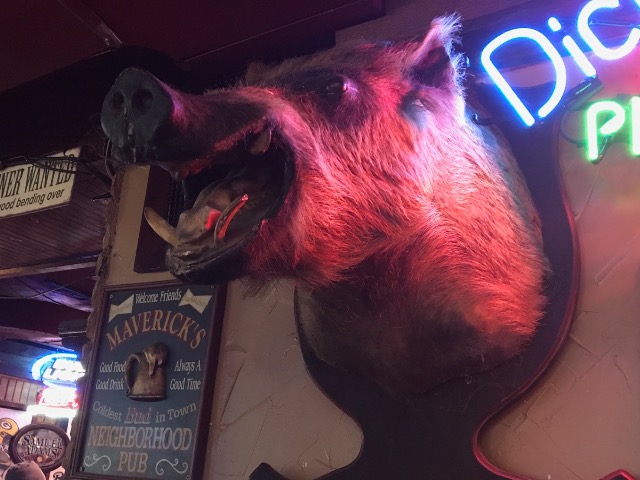 "Todd always says he shot it, but no, he didn’t," Carol laughed. "It was a customer that hunted, and it was actually his boar head. And the thing was every bar needs a pig, so that’s why he donated it."

Todd’s favorite gem decorating the wall, however, hangs from the ceiling on the other side of the bar: a large piece of the center field padding from Milwaukee County Stadium, complete with a big "402" emblazoned in bright yellow. 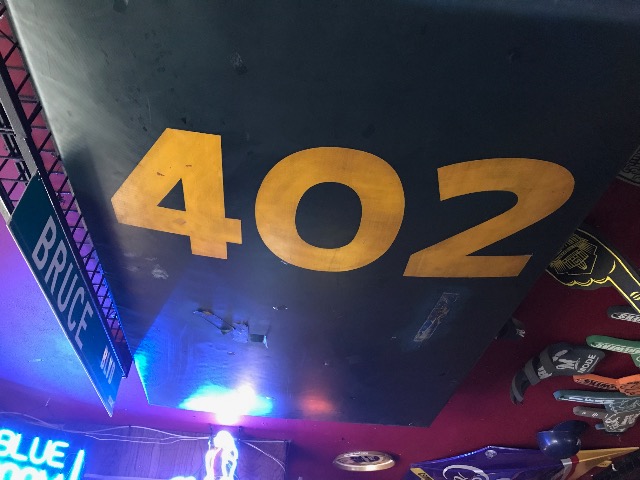 "The stadium was getting torn down and they were selling everything, so he went down to check out what they had," Carol recalled. "So he brings this thing back, and I’m like, ‘What the heck is this blue mattress doing in my home?’ And he’s like, ‘Carol! It’s center field!’"

"I was like, ‘Trust me; it’s cool! It’s dead center field County Stadium!’" Todd added, chuckling. "She was not happy with me."

Even with all the fun trinkets and treasures on the walls, right now is actually a fairly low-key time for Maverick’s. During the holidays – Christmas and especially Halloween – Carol adds an extra layer of decorations on the walls. Even the roof doesn’t get to go unscathed, this year getting a horse skeleton placed on top for some extra seasonal spookiness.

It all adds to an atmosphere that feels less like a standard bustling bar and more like a dear friend’s always open mancave – though one complete with multiple TVs, a back bar addition with a three large screens taking up an entire wall and a menu of beer, burgers (called the "Chubby" and the "Husky") and pizzas, with a homemade tomato sauce that Todd proclaims he’ll put up against anyone else’s in the city. And if you come at the right time, you can even get some of that food and drink for free – if you can hold your liquids.

"We have a Bladder Buster which is every Packers game, and all the beer is free until the first person uses the bathroom," Carol noted. "We have alarms on the doors, and it usually lasts between an hour and an hour and a half."

In addition, beginning a year and a half ago, Maverick’s hosts a Free Food Wednesday, serving some home-cooked food for free between 4 and 6 p.m.

"I wanted to do something appreciative to our customers, and Hump Day is the best day to do that, because it’s the middle of the stress of the week," Carol explained.

One doesn’t need to get free food or drink, however, to feel the love between the bar and its patrons. When I returned barely 24 hours after my memorable first visit, the vibe was all the same, with bartenders eagerly wanting to hear about your day – and, of course, give you a beer to wash it down – and patrons from all over the space chiming in with questions to ask, stories to share and love for their local watering hole.

The Maverick’s motto on the sign outside is actually wrong: Not once did I feel like a stranger.

"It’s a 24-year deal," Todd said. "I lived in Florida and started bartending in Florida, and you just can’t find a corner bar down there. They’re either corporate, or they’re in a mall somewhere. It’s kind of neat to be able to become a part of the neighborhood. And in 24 years here, I think we’ve done that."