2018 was the start of a new era for West Allis, with the city gifting itself a new marketing agency and brand identity during the holiday season. But while the town redefines West Allis, Phylo's remains firmly Stallis - proudly unpretentious.

It wasn’t just a new year for West Allis when the calendar flipped to 2018. It was the start of a new era, with the city gifting itself a new marketing agency and brand identity during the holiday season, emphasizing less of the industrial and townie preconceptions and more of the hip and trendy – craft breweries, sophisticated dining, sidewalk patios and clean new cool.

There’s a lovely garden patio, though you’re not technically allowed on it because it’s literally the owners’ garden patio, who live upstairs. Instead of sleek and modern, its walls are charmingly kitschy and cluttered.

Then there’s a massive, real rocket above the front door. 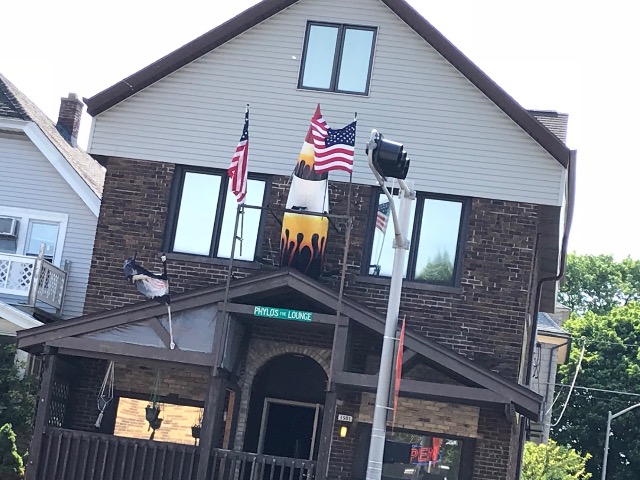 "That’s my ride out of here someday," joked Lois Lehmann, who co-owns the bar with her husband, Phil. "We had it in here for the longest time and then we put it up there, and he had it painted red, white and blue. He put handlebars on it; those are my handlebars – for the ride out of here."

A launch isn’t on the schedule anytime soon, however, for Lois and Phil. The bar’s origins go beyond the Lehmanns; the spot was previously called Chooch’s, named after a local fireman and friend of the couple, but in 1986, he decided to sell the place to Phil. It was a fairly spontaneous decision – Lois laughingly recalls her husband coming home and simply asking, "How would you like a bar?" Her response: "I don’t know!" – one that left the Lehmanns with 24 hours to come with a name for their new watering hole. Saturday was the final day of Chooch’s, Sunday was clean-up and then Monday was the start of a new place.

Thankfully, fate – and a friend at Chooch’s closing party – found them a perfect name: Phylo’s, a combination of Phil and Lou, Lois’s nickname. It turned out to be even more fitting than they could’ve imagined.

"Later on, I found out from a Greek friend that ‘phylo’ is a Greek word means ‘friends,’" Lois smiled. (A quick internet search turned up with most definitions translating into "tribe" or "race." Close enough.)

"I had an older woman come in – she couldn’t have been much older than me – and she came up the stairs, looking around, and said, ‘Do you sell phyllo dough here?’ I said, ‘No, sweetheart, ain’t that kind of phyllo.’" 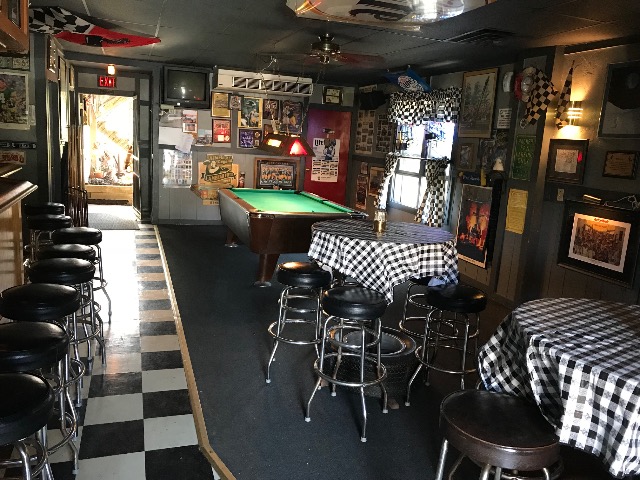 So what kind of place is Phylo’s? Walking into the West Allis dive feels a lot like walking into somebody’s cozy basement or mancave – fitting considering Lois and Phil do live right upstairs thanks to some recent remodeling. It’s dim but not dirty or dingy, a true mom-and-pop bar that puts providing a gathering place to the community before pretty much all else.

There’s probably wallpaper or paint on the inside, but you’d never notice considering all of the photos, posters and plaques on the walls – half of them, of course, dedicated to the Green Bay Packers and the other half dedicated to Phil’s love of cars. (Outside of the bar, Phil’s current project is fixing a 1929 Ford Model A.) Even if you missed the pictures, his automobile appreciation would be obvious from the checker print tablecloths and window curtains all over Phylo’s. 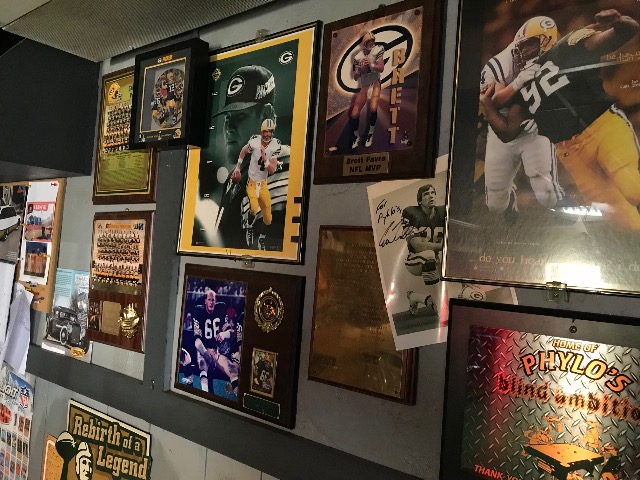 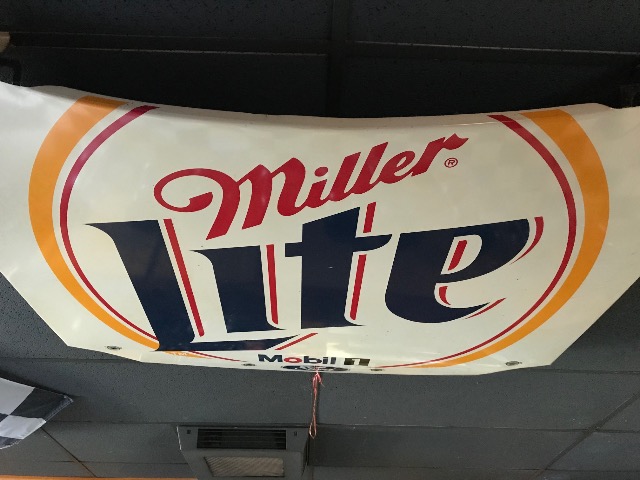 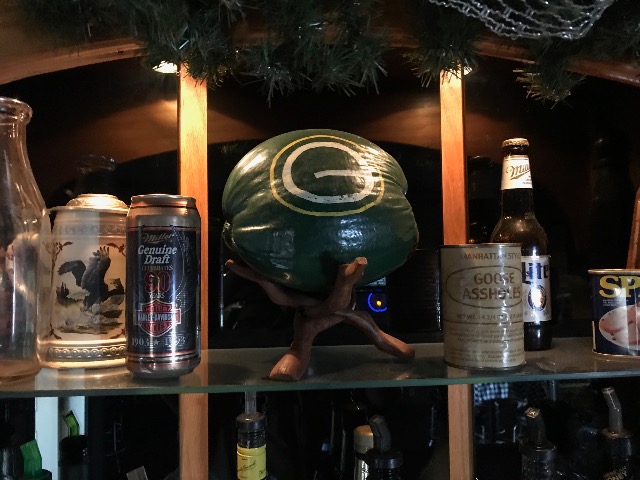 For those craving a soaker pad, the bar does feature a small food menu (beyond the aforementioned prank "goose assholes.") There’s a nice flattop griddle behind the bar where Lois cooks up half-pound burgers on Kaiser rolls, with lettuce, tomato and onion as well as a choice of fries, onion rings or tater tots.

"Burgers any way you want to make ‘em," Lois preached, "but you don’t make them – I make them."

But that’s about as far as the fuss goes at Phylo’s, which is as pleasantly simple and straightforward as its outside sign: "Stuff to do. Stuff to eat." The beers are cheap – domestic beers are $2.50 from 3 to 7 p.m. – but the company is rich, with residents of all generations coming by for a drink with Phil, "Lou" and the rest of the neighborhood, growing up and evolving right at their bar.

"I like meeting people and having a good time," Lois said. "It’s a cool bar only because of the people who come in here. They’re all different ages and they all get along. Every seven years, people change – either they have families or the older people come back after a while for a few nights. And then it just keeps going around."

Change is certainly something Lois is used to after 33 years in the neighborhood and in the bar business. The pool and darts leagues of the Chooch’s days have dwindled away; only two teams play at Phylo’s now, while there’s not even a dartboard in the bar anymore. ("No one wants to be obligated anymore," she noted.)

The bar took a hit from the smoking ban of 2010, though the Lehmanns installed an enclosed front porch area for those customers. Then there’s all the recent changes in West Allis and general bar culture, shifting more toward craft breweries and other more refined options.

But even in the midst of a city-wide rebrand, there will always be a warm, welcoming neighborhood tap like Phylo’s.

And if not, well, Lois’s flashy ride is parked right out front, ready for takeoff. 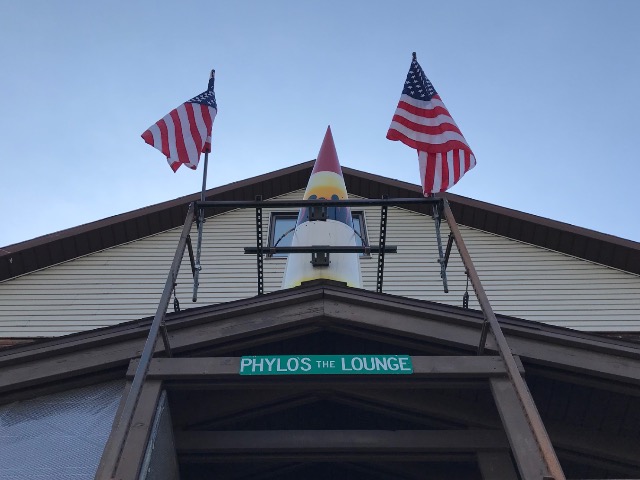