With values like fair prices and putting socializing with your neighbor first, even tucked away in the suburbs and by no means flashy, there's indeed nothing hidden about Ray and Dot's place in Wisconsin's bar culture.

Did you hear that? That was the sound of Greendale and its surrounding villages collectively scoffing at the idea of Ray and Dot’s Tap, 6351 W. Grange Ave., being some unknown secret hideout rather then the classic community watering hole its been for more than half a century.

"The people who grew up in here and around the area – if I’ve heard it once, I’ve heard it a hundred times – would say ‘Oh, I used to go there all the time!’" said Marc Koepsel, the bar’s owner and son of the titular Ray and "Dot," short for Dorothy. "I used to serve the parents, and now they’re grandparents. I’ve been to Mexico, Punta Cana, Jamaica, with my Ray and Dot’s t-shirt on and people stop me saying, ‘I used to go there!’

"When you’ve been in the same location for 60 years, you get that."

Admittedly, if you’re new to the area or driving down the popular drag through the village, it might be easy to confuse the bar for the neighborhood American Legion Post – mostly because the two are actually one, located in the same building with the Post’s flags and a statue out front.

"It's certainly, in the region here, not hidden, but in Milwaukee County, definitely," said Jeff Bartels, a regular at Ray and Dot's for more than 30 years before hopping to the other side of the bar three years ago. "They're thinking it's going to be an old stodgy Legion Club, but it's a totally different vibe." 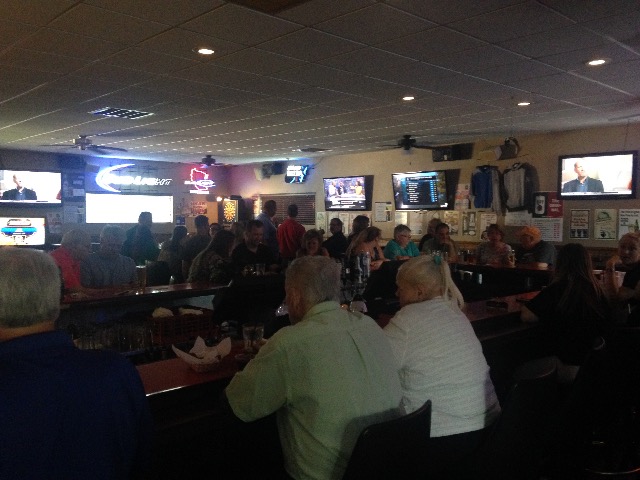 Ever since Ray and Dot’s Tap first opened its doors in 1957, the bar and the post have always been joined at the hip. Back then, the two were located in a farmhouse, with the Koepsels living above the tavern in a three-room apartment for its early years. About ten years later, the family moved out to a house on the corner, while the old farmhouse – once a boarding house for Greenfield’s first school teacher – was taken down, replaced by Ray and Dot’s currently building.

"I remember being a kid, watching them tear my house down basically," remembers Koepsel, who also fondly recalls watching his dad work the bar wearing that classic bartender uniform of a white shirt and black pants back in the day – professional but far from snootily formal. Marc would eventually join his father behind the bar in 1977, the day he turned 18, before officially taking the reigns himself, buying the local landmark from his parents in 1995.

Over the years, Ray and Dot’s Tap has seen plenty of other changes – in drinking culture and, therefore, inside the bar in order to keep up with the trends. Back when it first opened, the bar had just two options: ten cents for a 12-ounce Pabst, or live it up and add a nickel for an Andeker. With today’s craft-crazed consumers and increased number of breweries and brands out there, however, Ray and Dot’s has now upgraded to 18 beer lines. Then there are the flavored vodkas, rums, and other various liquors and drinks that one expects from a bar in the 21st century.

"I tell you: 20 years ago, I wouldn’t have even dreamed of pouring bubble gum vodka or cinnamon vodka," Koepsel laughed. "I’m glad I don’t bartend anymore, because we have a drink book now that’s about 100 pages thick. It’s way beyond my predictions."

The food menu grew over the years as well – from merely Stewart sandwiches to a full menu of bar staples like pizza, wings and" Scooby snacks." a cute name for mini corn dogs – and the walls are now decked with TVs.

"We try anything different, but it’s so unpredictable now; things change so fast," Koepsel said. "But we’ll always remain the social, say hi to your neighbor kind of bar – whatever new trend comes along."

Indeed, walking into Ray and Dot’s, it’s not what’s changed or new that captures your attention but what clearly hasn’t: the cozy vibe of a small-town, working class neighborhood tap where, indeed, everybody knows your name – probably because you’ve all grown up together, went to school together and are obviously now drinking together.

And when Ray and Dot’s talks about being a community spot, it means the entire community, across all generations. Spending a day at Ray and Dot's means watching the crowd morph from retirees grabbing a quick drink to start off the day, to those coming home from a day’s work, to a younger, millennial generation popping in later at night to hang – all comfortably and casually co-mingling together over cold beers.

"I'm a second generation guy," Bartels said. "My dad used to come here and still does, and I have nephews and nieces that are of age, and they're third generation. We even have fourth generation people here. It's not unusual to have somebody in their 70s sitting next somebody in their 20s on a Friday night, having a conversation together."

"As we all know, the art of communication and socializing has gone away; it’s all texting and emailing," Koepsel said. "We’ve always been that kind of place where you meet someone or meet old friends, and be able to have a conversation, not sit there and scream in each other’s ear because the music is so loud." 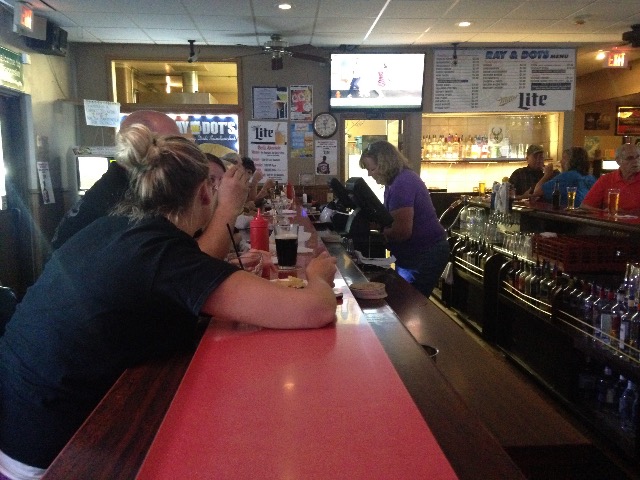 That’s why Ray and Dot’s also keeps the music low until later in the night – and definitely during Packers games, as one customer of lore learned the hard way.

Clearly, this is a place with its priorities straight – yes, when it comes to the Packers but also, most importantly, when it comes to people. It's the kind of bar where piddling around on your cell phone makes you the oddball, not the norm, and the prices – while maybe not a dime anymore – still treat the wallet well. Pints of either import or craft beer are $3, while domestic 10-ounce taps are $1.25.

"You can always tell who’s new here, because they’re order three drinks, and I’ll say, ‘OK, that’ll be $9.50,’ and they go, ‘Wait a minute, did you get the Spotted Cow?’ And it’s like, ‘Yeah, I did. Welcome to Ray and Dot’s. Those are our prices,’" Bartels added. "I've always said this is more like somebody's really cool rec room basement bar than an actual bar. And it's always been that way, ever since we were young kids coming up here."

With values – and prices – like those, even tucked away in the suburbs and by no means flashy, there’s indeed nothing hidden about Ray and Dot’s place in Wisconsin’s bar culture.