What could possibly be hidden about the Milwaukee Public Market? Yet on the east side of the building, tucked away in the shadow of the freeway, there's a cozy little sidewalk island hideaway that many may miss - and even more couldn't name.

What could possibly be hidden about the Milwaukee Public Market?

Behind the Calatrava, it’s likely one of the city’s most recognizable buildings – a popular B-roll spot for shows and movies like "Bridesmaids," telling the audience, "We’re in Milwaukee!" without having to actually film much in Milwaukee. The landmark’s even more beloved inside thanks to its plethora of popular lunch options for CNBC TV show hosts, "Bachelor" contestants and pretty much anyone else who’s lived or merely set foot in the city. If the Public Market’s a hidden gem, might we recommend another little-known secret entertainment hotspot called Miller Park?

And yet, on the east side of the building, tucked away in the shadow of the freeway while the front of the building baring its namesake takes in the spotlight, there’s a cozy little sidewalk island hideaway that many may miss – and even more couldn’t name. Most just know it as "the tiki bar," even though it’s not a tiki bar. It’s technically a palapa – the St. Paul Palapa, to be exact. 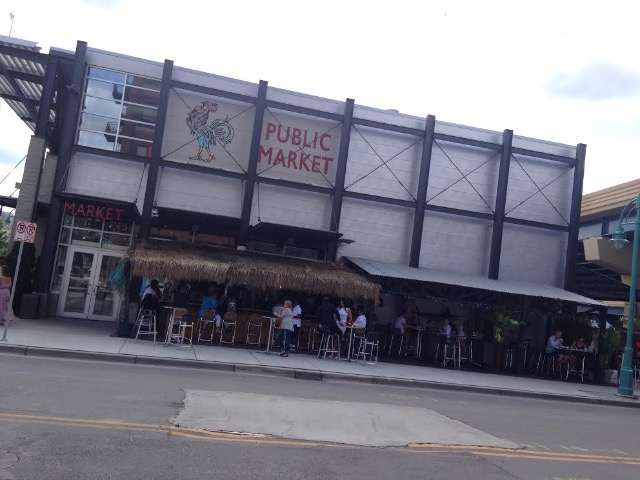 "We are sort of invisible when you look down the block; you don’t necessarily see us," admitted Patrick Nedobeck, who runs the bar as an extended part of St. Paul’s Fish Company. "We still have customers who’ve been coming to the market for years who come out here and say, ‘I didn’t know this was here. Did you just put this up?’"

No, the St. Paul Palapa was not just put up. The open sidewalk bar and its namesake thatched leaf roof went up this month four years ago. The actual bar itself was installed a year or two before – at the time merely a sleek but sterile stainless steel bar that matched the rest of the architecture but, Nedobeck remembers, provided no atmosphere or fun. So Tim Collins, the co-founder and owner of St. Paul’s Fish Company as well as Nedobeck’s brother-in-law, found the tropical-themed roof to place over the bar.

It was a big, bright addition that played like "a lead balloon,"according to Nedobeck, getting caught in some red tape during its early days – though he admits that probably has something to do with the fact that they didn’t particularly ask permission to do it.

"It is the gem of Milwaukee down here, and they are looking for a certain aesthetic," Nedobeck said, "and a thatched roof hut does not necessarily fit into the sprockets-like vibe that they’ve created."

The neighborhood, however, quickly grew to love and support the palapa, Nedobeck says, their concerns fading into the past – along with any sign or memory of the space’s sleekly antiseptic former self, replaced now with a green tropical vibe that truly feels like a island vacation from the bustling city world around it. 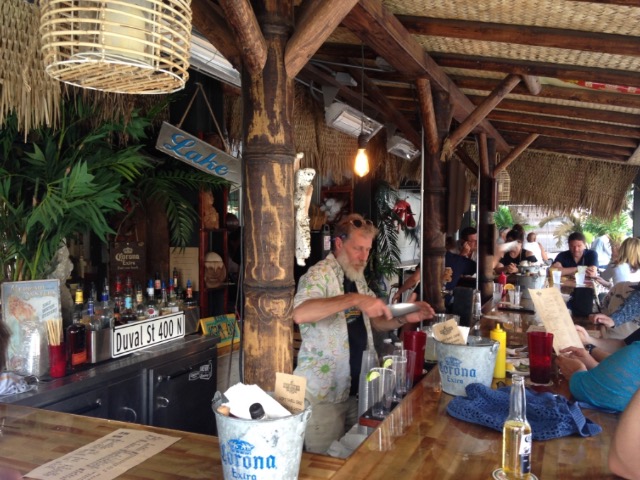 The bartenders serve up beer and island drinks, as well as fish dishes from St. Paul’s right behind the bar’s back window, with a sunny disposition to match the setting. When suddenly quizzed on what goes into a rum and Coke during our interview, the afternoon bartender Alex quickly chimed, "Personality!"

The rest of the space follows that same attitude, as reggae, soul and classic oldie jams selected by Nedobeck – a former musician himself with the Milwaukee band Colour Radio – cheerfully ring underneath the rustic roof and the cozy but not cramped secluded sidewalk of the St. Paul Palapa. The spirit is contagious too, as patrons give the soundtrack a run for its money, chatting familiarly with the strangers around them.

"You’re throwing a party on the sidewalk under a tiki/palapa roof and creating a vacation environment surrounded by concrete," Nedobeck said, who admitted he originally had exactly no interest in working the bar for the family business, much less run it.

No stranger to the Milwaukee bar scene with past gigs at Rosie’s and Jamo’s, Nedobeck originally vowed to never come down full time at St. Paul’s. He signed on for just one night – the evening the roof first hit the side of the market – which grew into one night a week. And then two. And then the whole week, every week, playing his chosen playlists throughout "his baby," adding a little more room a little further down the block and constantly thinking up more character to bring the nook – inspired by his mother’s work and travels to Jamaica. That means more old reggae posters and signs, new lighting for the metal frame, new flooring and even more island charm to help it stand out in its space in the shadows.

"The tiki thing is getting real hot now, and all due respect to the other places – and I think Foundation is one of the greatest bars in America; I love that place – we’re a bar on a sidewalk in Milwaukee; it’s pretty damn cool," Nedobeck claimed. "There’s not another place in town that you can belly up to a bar on the sidewalk – not just get a beer, but a bar." 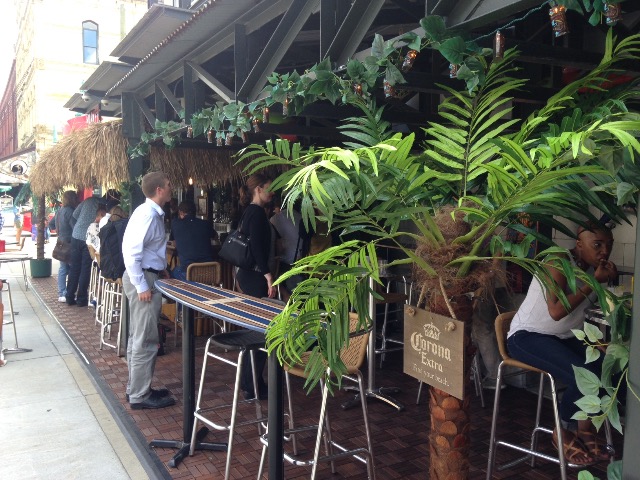 Of course, thanks to Wisconsin’s predictably unpredictable, unforgiving weather, there aren’t many times one can – or would want – to belly up to a sidewalk bar either. As a result, the St Paul Palapa is limited to what Mother Nature allows – ranging in past years from just three months to staying open April through November.

"We’re not known for our forgiving weather, but we do have a few months a year that are pretty forgiving," Nedobeck said, "and Milwaukee is positively one of the greatest places to be in the summertime. You take what Wisconsin gives you, and you do the best you can with it."

And when Wisconsin gives you cold and snow, you make the logical move: turn the island bar into an ice bar. Nedobeck made a maiden attempt at that concept earlier this year in the middle of February – short-lived for only a few weeks due to that unruly local weather – but he vowed that the ice bar will return for a second year, this time a month earlier. He also made moves to grow the ice bar into an entire ice block party.

"I’ve spoken with the owners of The Wicked Hop, planted a seed at Benelux and gotten a foot in the door with the neighborhood association, and we want a bunch of ice bars out here in the middle of January," Nedobeck explained. "I’ve spoken with a very prominent local musician who said he’d be happy to come out and play in the cold. We want an ice festival down here – sort of a winterfest."

But we’ll get to the winter when we get there. In the meantime, the sun is finally out, summer is finally here, and there’s a private island vacation hiding behind one of the city’s most public places.