The Gig isn't located on an island, but it might as well be. And yet for the past 16 years, neighbors in the little Riverwest suburb have sought out the music-themed bar's cool, calm and cozy drama-devoid vibe.

The Gig isn’t located on an island, but it might as well be.

The cozy neighborhood bar is tucked away at 1132 E. Wright St., snuggled within a subdivision of quiet dead-end streets and cute homes wedged East of Humboldt and West of the Milwaukee River that, on a map, protrudes like an odd lump off Riverwest. It, along with fellow watering holes (and almost certain future Hidden Gem nominees Gee Willickers and The Squirrel Cage), are places you seek out, not places you stumble upon – despite the best efforts of The Gig’s logo painted on the outside wall facing Humboldt (the creeping vines don’t help). Even one of The Gig’s neighbors just down the block had to be told where to find the bar, according to owner Barry Lewis.

"I know the regulars here and the neighbors appreciate it because we’re not in a big area. A lot of people aren’t familiar with here; they don’t drive up and down Dousman or Wright. I guess we’re kind of hidden – but the regulars know how to find us," laughed Lewis.

And for the past 16 years, they have – and understandably so, considering the bar’s cool, calm and cozy drama-devoid vibe. Oh, and the very cheap drinks, with $2 craft beers on tap on Thursdays and $1.50 rail drinks and domestic bottles.

Despite its name, The Gig is not particularly a live music venue, but live performance has always been an integral part of the bar’s DNA ever since it opened in the spot (formerly another hidden gem, the Hobbit-themed – yes, Hobbit-themed – Barrel Riders) in 2001.

"Back in the days when they had CDs in the jukebox, we tried to fill ours with live music – so like Cheap Trick at Budokan or whatever else," Lewis explained. "That way, you could come in and listen to live tracks from everywhere – anything we could get that was live, we’d put in there. We made it about 75 percent of the music we had in there was live – but then they came up with the internet jukebox, so it doesn’t really matter anymore."

A physical specialty jukebox – the reason for the bar’s name – may no longer be necessary these days, but the music theme clearly still lives on The Gig’s walls and in its soul. Scattered across the tavern’s warm walls are incredible photos, posters and autographs from legends like The Beatles (Lewis claimed Paul McCartney as his favorite gig seen in person, always able to inspire awe), the Grateful Dead, Muddy Waters, Jimi Hendrix and many, many more. Some were gifts; others were discovered right there in the community, bought from beloved jazz and civil rights photographer Chester Sheard, who passed away in Milwaukee in May of 2016. 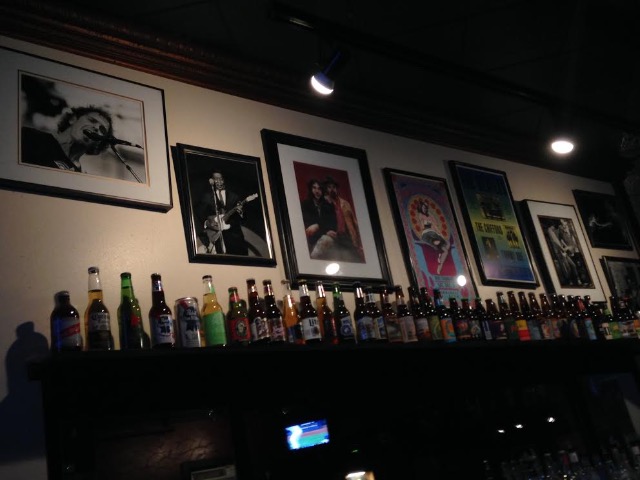 In addition to the impressive photography, murals of jazzy shadows playing their instruments decorate the walls, while a street sign for "Jerry Garcia Blvd." guides patrons out to The Gig’s peaceful, fenced-in porch area. And though it’s not a performance venue, The Gig does host an open mic night on Wednesdays and a bluegrass jam session on Sunday afternoons (except during football season; the neighborhood may be its own undisturbed little world, but it’s still in Packers country). 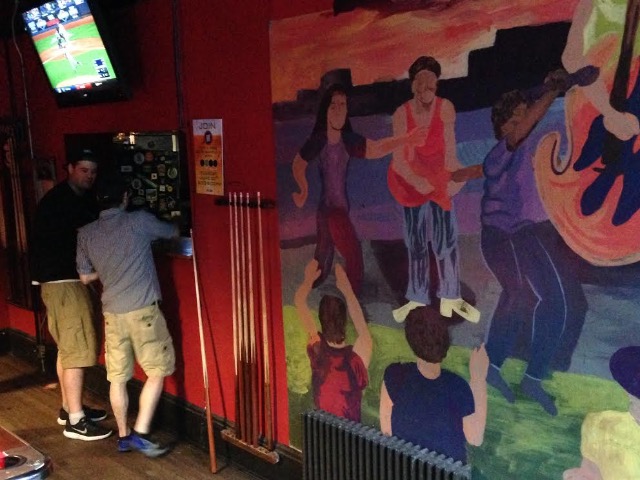 While it may not host that many actual gigs, The Gig – with its smartly assembled music atmosphere, dark but not dreary lighting, small two-table pool hall connected to the main room, and an assortment of pinball machines and couches gracing both spaces – conducts a cozy environment in perfect subtle harmony with the low-key, drama-free community that surrounds it. One neighbor conveniently demonstrated that point while I chatted with Lewis, politely interrupting our interview to hand over a wallet he’d found on the street outside.

And that’s not even including the grill out on the porch, available to all to cook up a friendly barbecue at the local dive.

"So as long as they buy their beverages from me, that’s fine," he added chuckling.

Like many of the best hidden gems throughout the city, walking into the The Gig feels more like a good friend’s basement than just a simple place for beers. Even with its impressive collection of music and memorabilia, it’s less about the nifty or flashy items that decorate the space and more about the people, the spirit and the neighborhood that fills it nightly – a neighborhood that’s an offbeat, unexpected but utterly essential, colorful riff from the city’s usual rhythm.