The Hill Has Eyes offers 45 acres of haunted scenes that range from creepy to harrowing to humorous and 50 percent of it is brand new this year.

Located at the Rock Sports Complex in Franklin, The Hill Has Eyes offers 45 acres of haunted scenes that range from creepy to harrowing along with dashes of humor mixed in for good measure.

"The Hill Has Eyes is in its seventh year and for those who come every year or have been here before, it's going to feel entirely different," says Joe Zimmerman, Haunt Director.

"It's even more immersive this year," says Zimmerman. ""We’re trying to create an emotional roller coaster, lots of ups and downs, with some humor mixed in."

Construction started in April and since then more than 50 percent of the attractions have been reimagined and redesigned. The haunted experience is completely outdoors on 45 acres of land and takes about an hour to walk through.

Guests make their way through five outdoor attractions – Containment, Failed Escape, Hunger Hallow, Scare Lift (which includes a ride on an actual ski lift) and Carnivore – which tell a story based on a true tale. Fifty years ago, the massive lot that is now The Rock Sports Complex was a quarry and later a landfill that, in the pit, had a single mobile home with a person living inside it.

"We built the entire ‘Hill Has Eyes' story from that piece of local history," says Zimmerman. 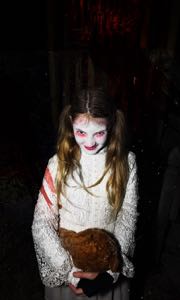 and mutated the "hillbillies" who live in the trailer park at the bottom of the hill. A side effect of the infection is that they crave human flesh and blood, so the government makes an agreement with the hill folk: once a year, they will get thousands of unsuspecting people to walk through the area for a "harvest" during which time they are allowed to feed on the victims. In exchange, the "hillbillies" will not leave their trailer park and eat anyone else for the rest of the year. 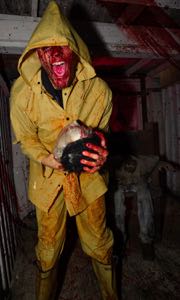 school students to professional actors. They all have a specific role, purpose and script. Seasoned actors are allowed to ad lib, but newer employees are required to stick to their lines.

"We have a lot of returning staff that is the HHE Family," says Zimmerman. "We’ve found a core group who come back year after year and they’re amazing."

When it’s not Halloween season, the hill – which was formerly known as Crystal Ridge – serves as a ski hill and mountain bike course. The ski lift – aka "scare lift" – is one of the most exciting and unique aspects of the Hill Has Eyes.

There is no age requirement to attend Hill Has Eyes, but parents should use discretion. The hour-long course requires extensive walking on uneven surfaces, dark, claustrophobic passages, loud noises, gory scenes, unexpected human and robotic interactions and more.

"Twelve is probably the magic number," says Zimmerman. "But it really depends on the kid."

Hill Has Eyes opens Friday, Sept. 28 and runs every Thursday through Sunday evenings through Sunday, Oct. 28. The price varies, depending on the day of the week (weekends are more expensive), and increases as the dates draw closer to Halloween.

Many nights sell out, so it’s recommended that tickets are purchased online. They are also available at The Rock.

Hill Has Eyes offers free parking, a large, heated tent with live music and a bar and bonfires that get the spooky party started before guests begin their trek through terror.

For those who are on the fence about going to a haunted house, there are rest areas between the five scenes and haunt-goers can leave at any time. Also, it's guaranteed that the actors will respect guests' personal space.

"We want to scare you, but when it comes to your safety and security we take that very seriously," says Zimmerman.

On Saturday, Oct. 20 and Friday, Oct. 26 from 5 p.m. to 6:30 p.m. the Hill hosts a "Not So Scary Halloween Party" that's ideal for kids and families who want to experience The Hill Has Eyes attractions when it's, aptly, not so scary. Instead, the actors provide a guided tour through all attractions and kids are encouraged to dress up and trick or treat along the way.

"The intention is that everyone has a full night of fun," says Zimmerman.