Urban Spelunking: New South Side library draws on past to build the future

In recent years, Milwaukee Public Library has been building for the future, replacing aged branches with mixed-use developments that ensure the libraries will be community fixtures for years to come. For its next project, MPL is moving the Forest Home branch into the future by reviving an old South Side neighborhood gem.

In recent years, Milwaukee Public Library has been building for the future, replacing aged branches with mixed-use developments that ensure the libraries will be community fixtures for years to come.

For its next project, MPL is moving the Forest Home branch, which opened in 1966 at 1432 W. Forest Home Ave., into the future by reviving an old South Side neighborhood gem.

The five-story Hills building, 906-910 W. Mitchell St., was constructed in 1919 and was, for years, a neighborhood anchor, housing one of a number of department stores that lined bustling Mitchell Street. During its heyday in the first half of the 20th century, Mitchell Street did a trade second in the city only to Wisconsin Avenue.

Isaac Goldmann’s Lion Store had been operating on the South Side for more than two decades when, in February 1919, its building was destroyed by a huge fire that also consumed or damaged a number of neighboring buildings, including St. Anthony Church across the street. 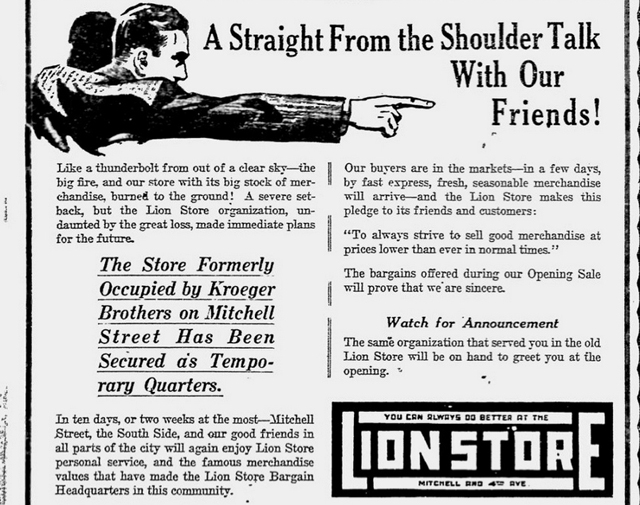 Temporarily relocating to an empty store, Goldmann (his brothers owned the store that bore the family name) set about building a new home.

"One of the city’s finest shopping establishments will be opened Friday morning when the Lion store throws open the doors of its new building at Fourth-av and Mitchell-st.," wrote the Journal just 364 days after reporting the fire. "Mahogany fixtures are used throughout the building and excellent show windows installed.

"The building is open to the daylight on all four sides, two passenger and one freight elevator occupying one side, but large windows on the remaining three sides will make it practically unnecessary to use artificial light. A system of washed air is employed whereby the air is warmed and pumped through the building by a great fan in winter and take in from the roof, washed, cooled and circulated through the building in summer." 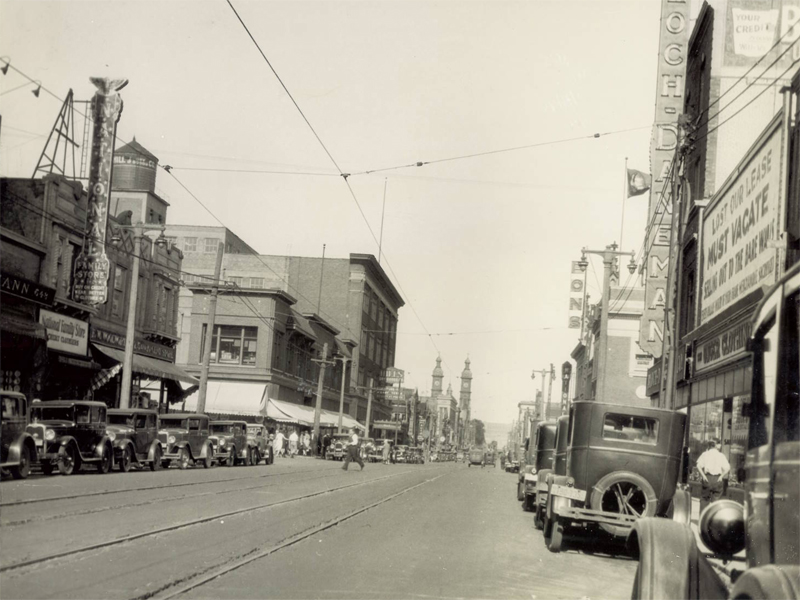 The first floor housed "the general run of yard goods and similar departments," as well as a bakery. The mezzanine was home to the "art goods." Housewares were in the basement and clothing on the second floor. On the third floor were the employees lunch room and kitchen, offices and, for customers, the drapery, carpet and furniture departments.

In 1929, Goldmann retired and leased the building to the Interstate Department Stores, which said it would continue to run the store as it was. The name was later changed to Hill’s and the store operated here for another three decades, closing in 1963. The sole remnant today of the Interstate retail empire is Toys "R" Us.

Other businesses also operated in the space during the Hill’s years, including a Krambo/Kroger grocery store in the basement, from 1947 to 1965, and Goeb’s Finer Bakeries, 1948-55.

A bargain shop occupied space from 1965 to ‘68 and Empire Television & Appliance and Big Bend Self Service Shoe Store were also in there in the ‘60s. The next decade found National Hardware, Wedding & Banquet Services and PM Upholstery Fabric & Supplies in the building.

By the 1980s, the space was being converted from retail and so began a long run of social services and municipal offices, and tenants included SER Jobs for Progress, a city tool loan program, state probation and parole offices, Social Security, United Migrant Opportunities Services and Genesis Behavioral Health.

One of the most interesting tenants was Top of the Hills, a short-lived punk rock club in the penthouse, that staged gigs by the likes of Dead Kennedys, Bad Brains and Beastie Boys around 1982. Rock critic Divina Infusino described the club as, "up four flights of stairs, in a South Side dinner-hall-turned-oven." 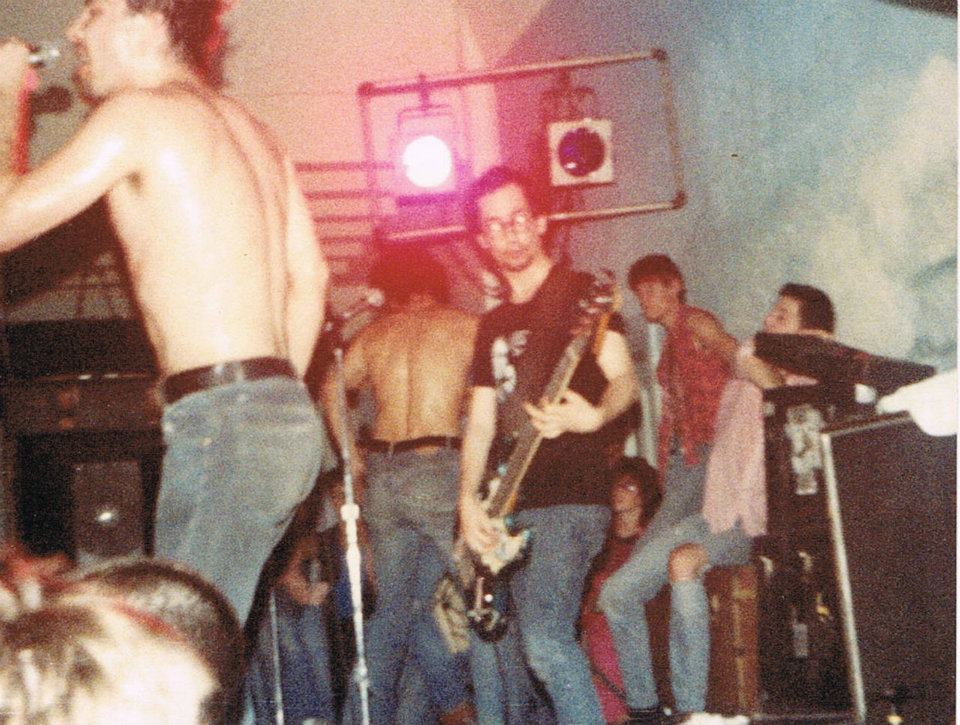 These days, despite years of alterations, many hints of the building’s past as a respected, ornately decorated department store remain. Though the mezzanine has been walled off, the original railing survives in the basement and is expected to be reinstalled.

Those soaring windows described by the Journal in 1920 survive on two sides and the hefty columns spaced throughout the main floor are topped with lovely capitals. In the lobby, the show windows survive and so does the decorated plaster ceiling. In fact, plasterwork survives above the dropped ceiling throughout the main floor. Some of the dark woodwork and terrazzo is still there, too.

Outside, at the Mitchell Street entrance, McGovern-Rowen is especially – and rightfully – enamored of the wrap-around glass like you just don’t see anymore. 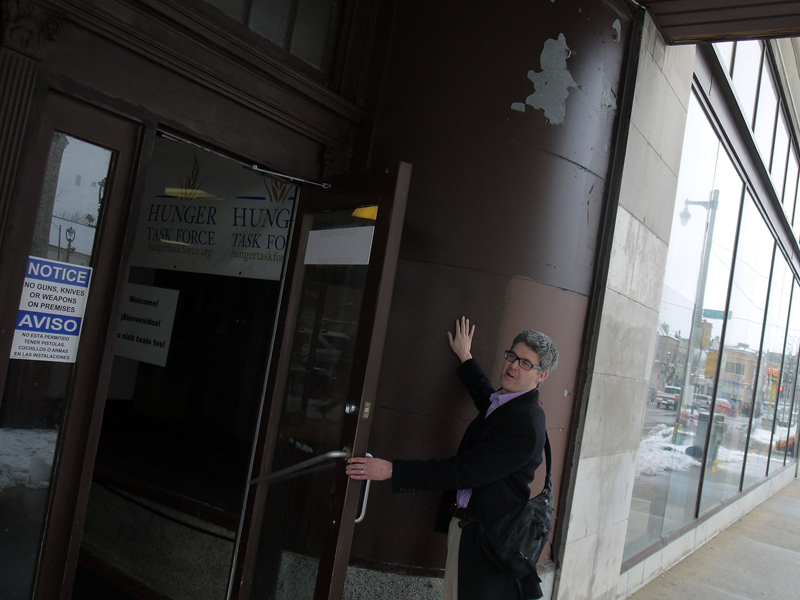 Fortunately, those details will remain, if all goes according to plan. On Tuesday, the library board of trustees chose architectural firm HGA to design a space that honors the historic features in creating a modern library for MPL on the ground floor.  Developer Gorman & Co. will create market-rate apartments on the upper levels of the building.

The HGA plan calls for re-opening the mezzanine and reconfiguring it as a study and meeting loft. There will be a multipurpose room similar to the one at the new East Library, which opened last year.

But most of all, the goal is to create Mitchell Street’s "Living Room," as the firm’s proposal describes it, using the floor to ceiling windows to draw the neighborhood into a sparkling new 16,000-square foot branch library.

"In 2016, the near South Side community will have a new Forest Home branch," said Library Director Paula Kiely in a statement this week. "Like the Villard Square and the recently opened East Branch, Forest Home will be a 21st century environment, rich with technology and flexible spaces for interaction and community connection."

The proposal has a basic plan for the new library branch, but the details are not carved in stone. First, MPL and HGA must engage the neighborhood stakeholders.

"We will bring them in to discuss some of the amenities and some of the things that are specifically needed by the community around the neighborhood," says McGovern-Rowen. "At the new projects that have opened, some of the things identified with those libraries came out of community discussions. Somebody at a meeting for Villard Square said, ‘Could we have a fireplace in here?’ So the fireplace idea was born.

"We took some of the stakeholders to the East Library to show them what’s possible and get them excited about what’s going to be coming." 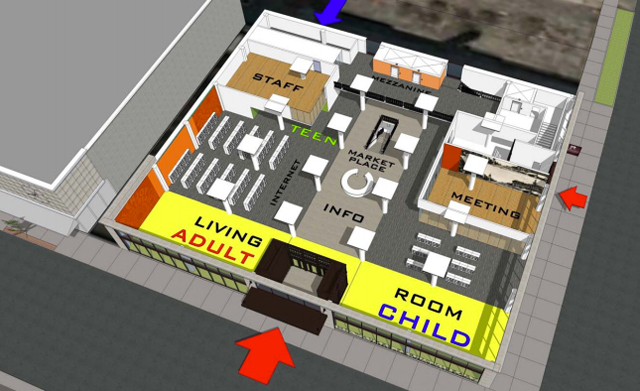 MPL expects to open – or continue already ongoing – discussions with neighborhood BIDs, St. Anthony’s Church and nearby schools, as well as hold public meetings, use open forums, targeted groups and an online survey to collect information from the community.

"We look forward to working with the City and Milwaukee Public Library to provide a welcoming neighborhood gathering place and deliver enhanced library services from this iconic building," said HGA's Jane Dedering, who is lead designer for the project, in a statement.

But now that the architect has been selected, the next step is to get the deal done with the owners of the Hills Building and Gorman & Co.

"Once the purchase agreement between the current owners and Gorman is complete, then we'll sit down and tackle the development agreement," says McGovern-Rowen. "Gorman will own the entire building. Then, at least this is how we've done it in the past, we will purchase the first floor condo. It would be a condominium association with two owners."

The goal is to have the new branch open to the public by 2016.