You don't even have to step inside to realize that the hotel at 611 N. Broadway in Downtown Milwaukee isn't your run of the mill Hilton Garden Inn. While the mid-priced hotels are pretty much invariably nice, they rarely leave you breathless. This Downtown property just might.

You don’t even have to step inside the building to realize that the hotel at 611 N. Broadway in the heart of Downtown Milwaukee isn’t your run of the mill Hilton Garden Inn.

While the mid-priced, upscale hotels are pretty much invariably nice, they rarely leave you breathless, as the Downtown Milwaukee property just might. One of the city’s loveliest and most stately Richardson Romanesque buildings, the hotel is housed in the former Loyalty Building, designed by Solon Spencer Beman – who also drew the iconic Pabst Building that long stood around the corner – and built in 1886 as the headquarters for Northwestern Mutual Life Insurance Company. 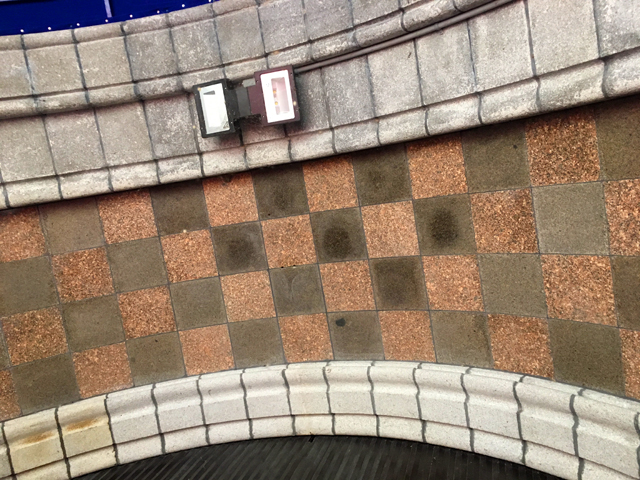 Executed in two types of grey granite, Beman’s building radiates strength and reliability – a definite plus for an insurance company. And a definite statement in the aftermath of the devastating fire that destroyed the Newhall House hotel that had previously stood on the site, claiming 78 lives.

Polished columns support a chain of arches along the first floor. Each of those is capped with another arch three floors above. A long areaway runs the length of the Broadway frontage, allowing light into the lower level and adding a charming old world vibe. 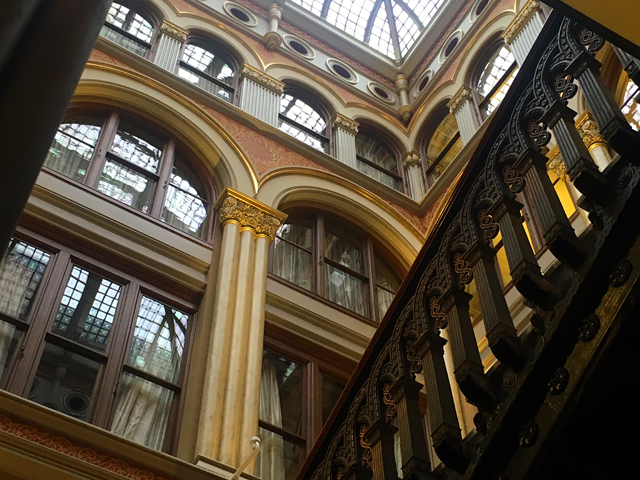 Inside, there’s stunning variegated tilework, eye-catching brass finials on the newell posts and a regal staircase at the base of a soaring atrium – beautifully decorated, much like the one up the avenue in the U.S. Federal Building – and capped with a broad skylight.

Though like many Milwaukeeans, I’d stepped into the lobby and gazed up at the skylight, I’d never had a good look inside this building that had an added allure for me. Once architect Henry Koch ended his partnership with Herman P. Schnetzky, he moved his office into the Loyalty Building. So, it is here, within these walls, that Koch drew his plans for Milwaukee’s City Hall, for The Pfister Hotel, for Gesu Church, for Golda Meir school and countless other local landmarks. 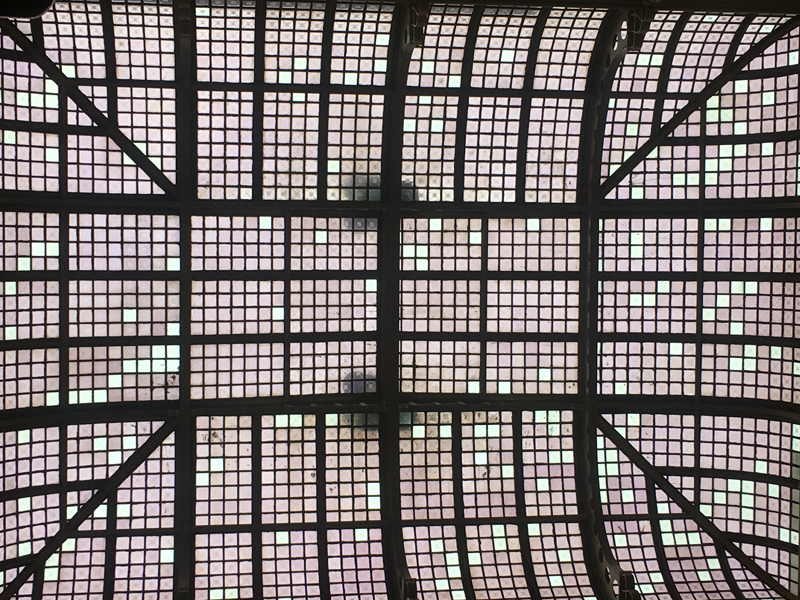 First, I got a behind the scenes tour with General Manager Nick Johnson, who appreciates exactly what a gem he’s got in his care. He’s eager to share its history and to show off its hidden spaces, taking me to see the massive pilings in the basement – where there are also some rooms that contain piles of spare vintage tiles for the floors above and old glass lampshades of varying shapes and sizes. 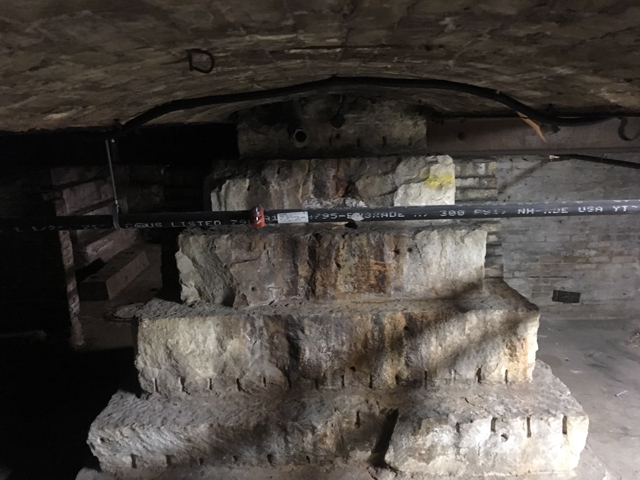 We climbed up behind the rows of circular air vents that ring the atrium just below the skylight, up into the old penthouse – no one knows for certain what it was used for, perhaps storage, perhaps a maintenance man’s quarters – and out on to the roof, which affords fine views of Downtown (especially the Mackie Building across the street). But the best view of all, is through the skylight, down into the atrium. 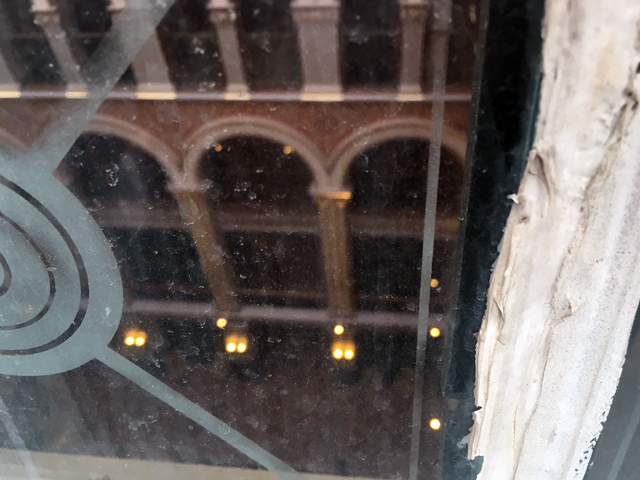 Johnson even took me into the stairwells to show how part of the building was constructed using lengths of railroad track (which is something also seen in the construction of the old Oneida Street Powerhouse).

He also showed me the areas on all floors that contain vaults, which were an important feature at an insurance company that moved a lot of sensitive papers and money around all day. 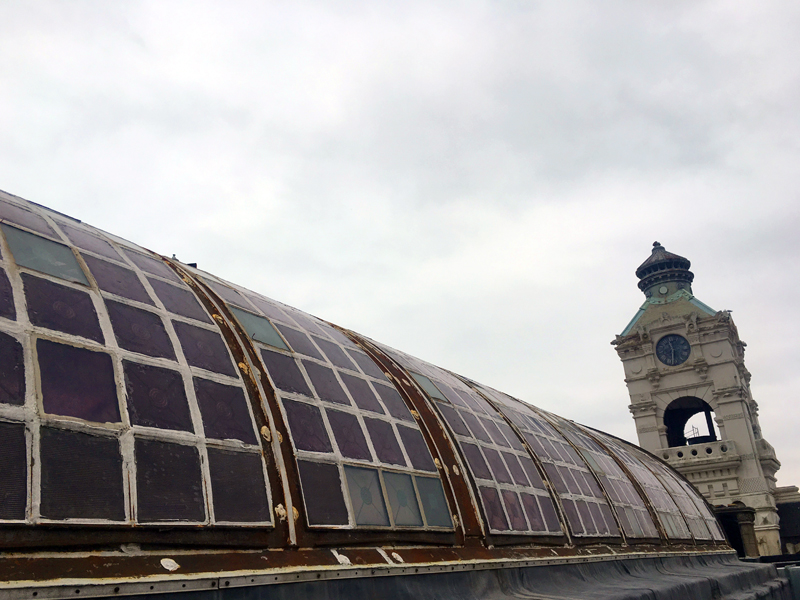 Although Northwestern Mutual moved down the street to its new headquarters in 1914, the Loyalty Building remained an office building until it closed in 2011 and work to convert it into a hotel began.

Fortunately, as I found out when I stayed a night at the Hilton Garden Inn, the charm of the original building was not bartered away in the deal. 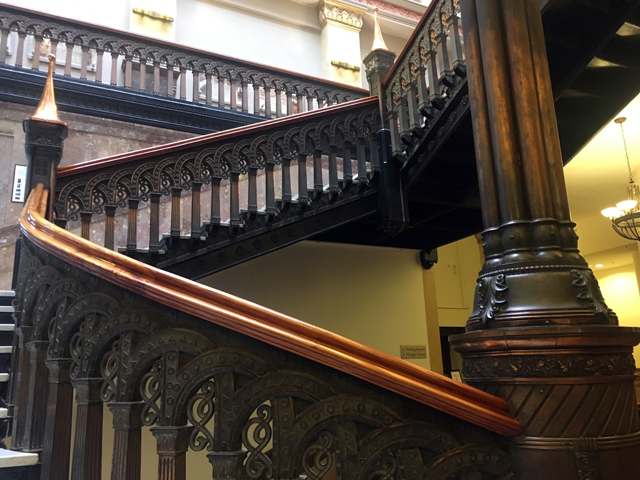 My room faced out at the Mackie Building and had the original gloriously high ceilings and the soaring windows to match. Johnson had showed me other rooms during the tour and in some of those, the original columns and their capitals had been preserved rather than walled over.

The room was clean and comfortable, with a coffeemaker, thankfully (you’d be surprised how many hotels overlook or skip this basic amenity nowadays), and some of the most comfortable bedding I’ve encountered. 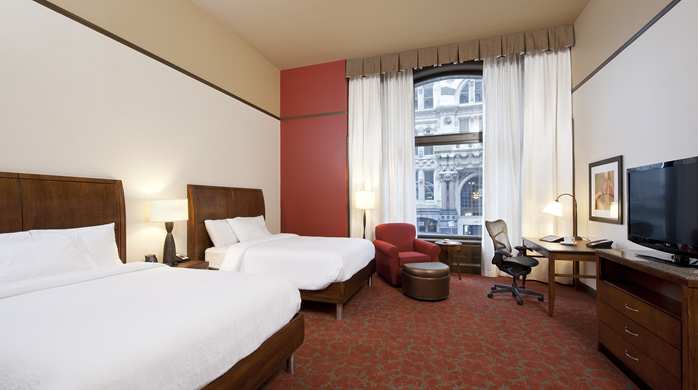 Tucked into the lobby, just across the main entrance from the reception desk is a quiet library that’s perfect for a chat or lazing with a book, especially in front of the fireplace in winter. There’s a workout room and, on the lower level, a range of meeting and event spaces, including one in the space where I used to get my teeth cleaned, before my dentist moved out to make way for the hotel. 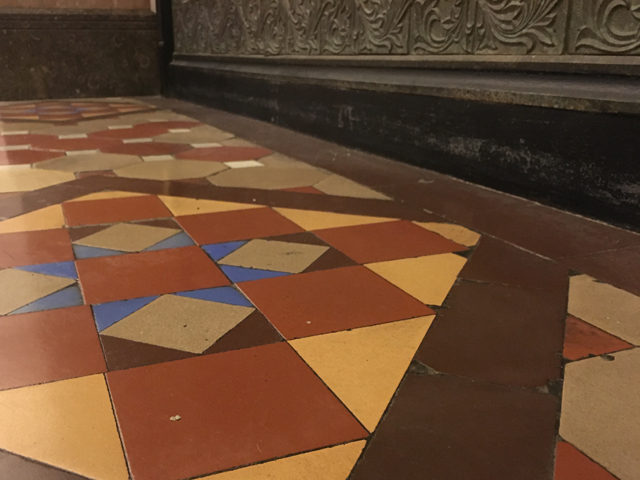 A bar and restaurant has plenty of cozy seating and some framed Life Magazine photos from the hotel’s collection, which is among the largest collection of Life prints around, according to Johnson. In the morning, the lobby restaurant serves up a satisfying all-you-can-eat breakfast buffet, with a few items also available on a made-to-order menu, too, for $12. 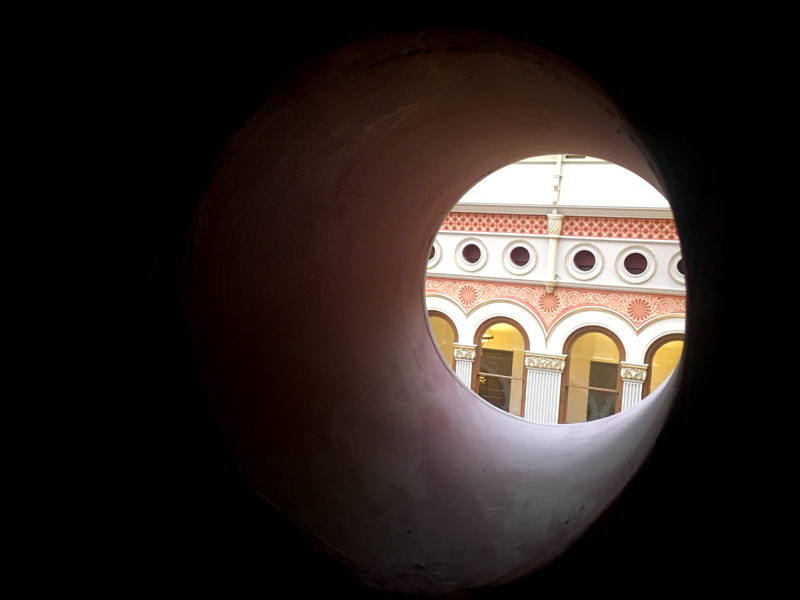