Historic gem takes on a new life as Bibinger's gastropub

Bibinger's, a modern gastropub, has brought new life to a historic property just outside of West Bend. And it's a combination of the building's rich history and the modern day personality infused into the space that keeps customers coming back.

Bibinger’s, a modern eatery and gastropub which opened in fall of 2016, has brought new life to a historic property at 3747 Cedar Creek Rd. in Cedar Creek, just outside of West Bend.

But it’s a combination of both the building’s rich history and the modern day personality infused into the space by its owners that keeps customers coming back time and time again. 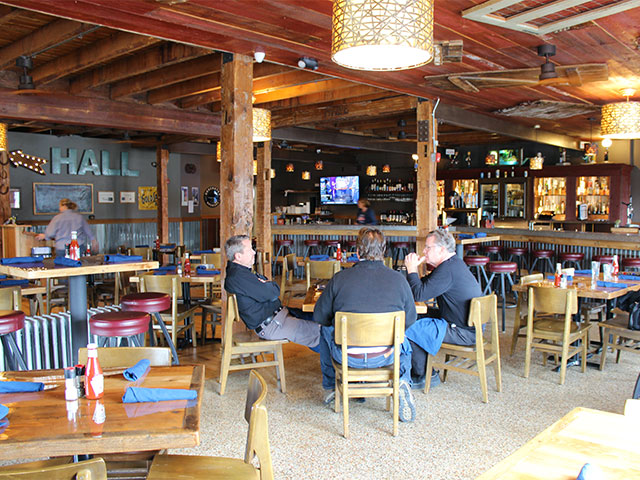 The building, which originally housed a general store, saloon and the Bibinger Hotel and Dance Hall, was built by Johann Bibinger in 1846. Over the years, it was passed along to numerous owners who ran a variety of businesses within its walls. For example, in the 1920s it was home to the A.B. Mueller Hotel and Sample Room. Later, it was converted into a slaughter house by Albert Heidtke before being sold to Joe Schwai Sr., who purchased the property in 1941.

Schwai’s Country Store Tavern & Hall became a community stronghold. For 64 years, the Schwai family hosted Friday night fish fries, weddings, fundraisers and Tiddlywink tournaments. And countless Washington County families made lasting memories inside the tavern’s walls. But when the family chose to focus their energy on their meat market, they sold the business to Tommy Kraus, who operated a restaurant called Emily’s in the space for a few years before relocating and leaving the building empty, its future uncertain.

However, in 2013 the property was granted a second chance at the hands of local developers Kevin and Amy Zimmer, who purchased the property, gutted the 170-year-old building and restored it to its former glory.

The venue was a passion project for longtime friends and business partners Travis Dowden and Benjamin Anderson, who, after working for years in the corporate world, decided to switch gears.

"About a year and a half ago, we started talking about embarking into restaurant ownership," says Anderson, who met Dowden when they attended UW-Madison together. "We’d both been in the corporate world for a while, but we knew we didn’t want to do it for the next 30 years of our lives. There was something about the hospitality industry that really appealed… primarily being able to be in the community and really give back through food, atmosphere and the experience."

It was a risk, Dowden admits, but for them, "failure was more about not trying," he says, explaining that the two friends had been scouting properties for a while when they came upon the Bibinger’s project.

"We drove up," Anderson says. "... it felt like we were driving forever to get there. But, when we walked in and heard the vision for the place, our interest was piqued."

After learning more about the property and its meaning in the community, Anderson says, they knew they had to take the project forward.

The building, which has been beautifully restored, pays homage to its past through rustic decor that includes wood paneling, metal accents and a variety of vintage signs which don the walls at every turn. 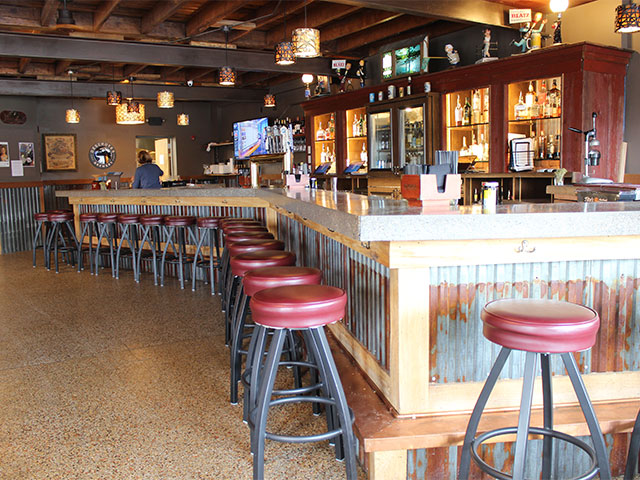 "People connect to this property in all different ways," says Anderson. "From associations with businesses on the walls to the photographs of people taken in the space."

Repurposed items include floor joists, which were made into the dining tables on the first floor, as well as the vintage wallpaper in the bathrooms, which was found in great condition underneath a set of stairs in the building. 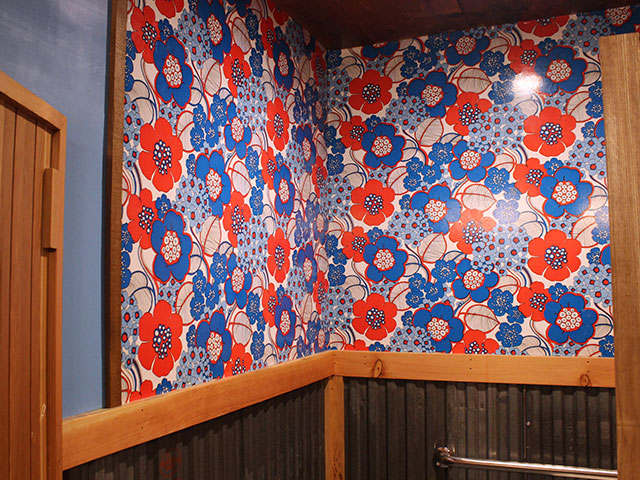 The original bar from the tavern has also been refurbished and is located upstairs in the restaurant’s event space. 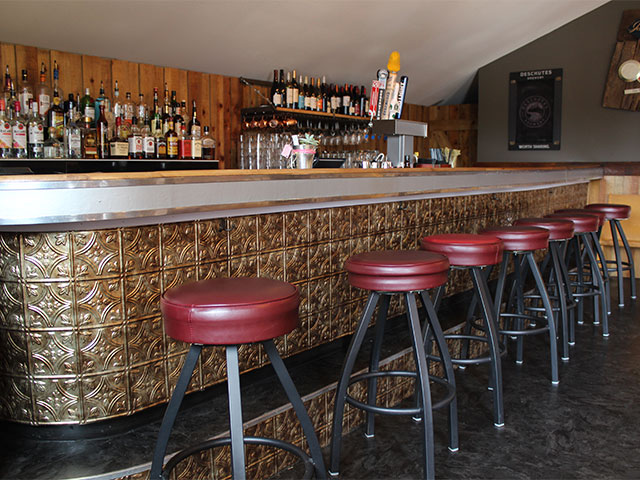 "It never gets old watching people walk in for the first time," says Dowden. "Connecting with the decor, giving us great feedback on the food. So many people have memories tied up in the space, and it feels really good to be part of the next chapter."

Dowden says they interviewed countless chefs for the restaurant before settling on West Bend native and former Cafe at the Plaza executive chef, Kady Gibowski, for the role.

"When we interviewed her, we just knew she was a fit," he says. "Her creativity was a big one. But, there was also passion and drive. You could tell it wasn’t just a job for her. And we really had a similar style."

Gibowski, says that at the time she was looking for a change of pace, preferably a restaurant where she could get back to cooking a full menu, including lunch and dinner.

"I was a little bit nervous about taking the leap of faith in working with new restaurant owners," she says. "But, I had a gut feeling about it."

And it turns out, her gut was right. Gibowski says the opportunity has renewed her sense of inspiration in the kitchen.

"My mantra, my background is grounded in simple food with good ingredients," she says. "I’m also big on tying in a variety of different cuisines. So, creating this menu based on comforting, from-scratch fare made with local ingredients has been so fun. It’s food I make when I’m at home. It’s comforting and simple."

Among the simple comforts on the menu are fried cheese curds (of which 60 pounds a week are sold) made from Milwaukee’s Clock Shadow Creamery cheese curds that are dipped in beer batter and lightly fried. They are served with buttermilk jalapeno ranch dipping sauce ($8.50). 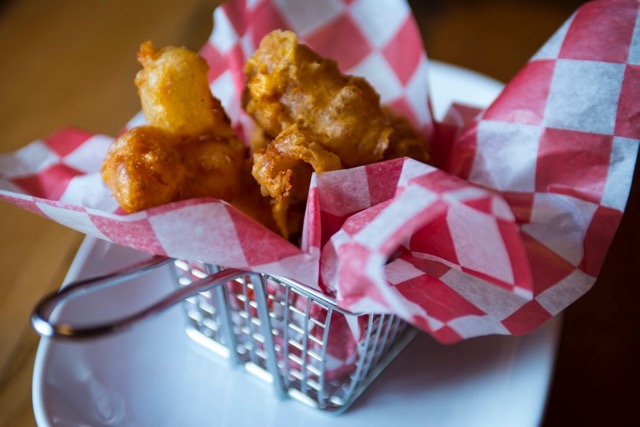 Pork schnitzel, an item Gibowski transformed into a breakfast dish at Cafe at the Plaza, is back on the dinner plate, served up with house-made spaetzle, caramelized onions and Schwai’s bacon, topped with a creamy whole grain mustard sauce and a sunny side up farm egg ($16). 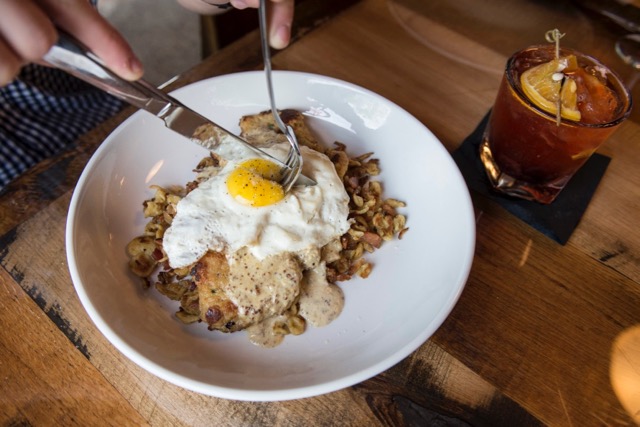 On the lighter side are Thai rice noodles sautéed with red bell pepper, broccoli, radishes, scallions, bean sprouts, peanuts and tofu, tossed with a gluten-free soy and rice wine sauce, served with a side of Sriracha chili sauce ($12). 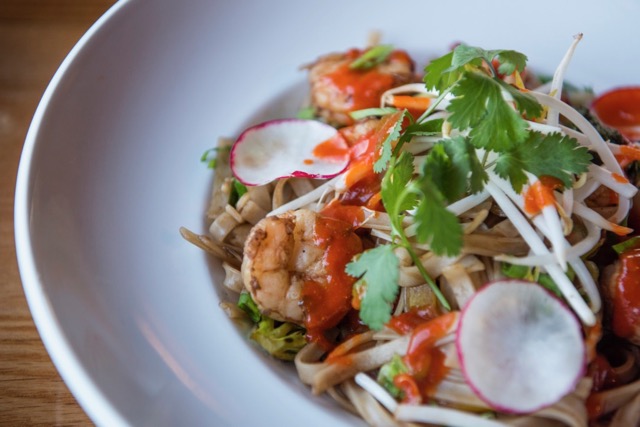 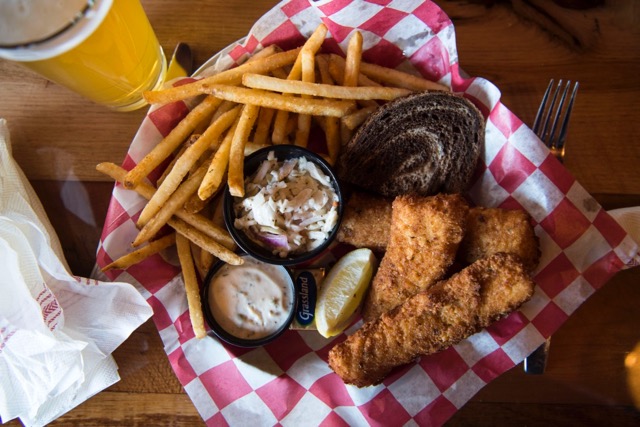 On the sweeter side, desserts include "a torte, a tart and a treat," three scratch-made options which change weekly. They’re created by sous chef Staci Griffey, who came to Bibinger’s after working at Le Reve in Wauwatosa.

Among the options available for diners on a weekly basis are desserts like blueberry shortcake, Hello Dolly torte and classic layered tiramisu (pictured). 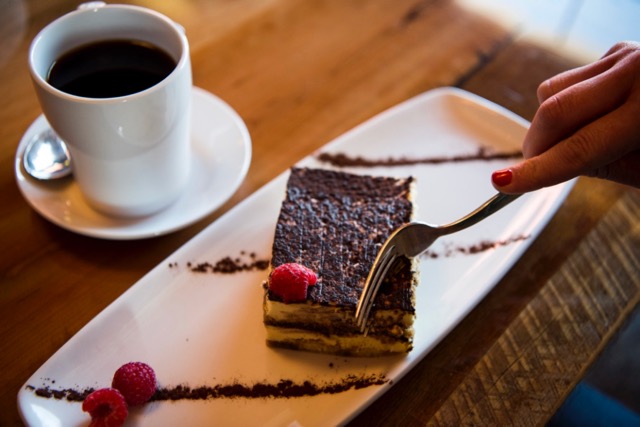 "It’s really rewarding to see all the happy people," notes Anderson. "And it’s great to start to see regulars who sit in the same spots at the bar and order the same things every time. If we can wake up happy every day, that’s all we want. We’ve created a family here. And everyone who comes through the door is part of that."