Hollywood Vampires is less than the sum of its superstar parts

Describing the star-studded supergroup Hollywood Vampires sounds as close to fan fiction as the rock world has to offer: Alice Cooper, Joe Perry and Johnny Depp (sure, why not) on one stage. The band is a bit more Frankenstein than vampire, however.

The OnMilwaukee Summer Festivals Guide is presented by Potawatomi Hotel & Casino. Create your summer story by participating in casino wide promotions with the chance to win big. This summer I will own it! Click here for more details

Describing the star-studded tribute supergroup Hollywood Vampires sounds as close to fan fiction as the rock world has to offer.

Created in 2015 as a way to pay homage to the legends who have left us too soon, the band features Alice Cooper and Aerosmith’s Joe Perry teaming up with Hollywood’s once-coolest man Johnny Depp, with a backing band made up of alums from Guns N’ Roses and Stone Temple Pilots, playing a set list of some of the greatest rock songs to ever hit airwaves. Yes, it’s essentially just a cover band, but the most high-profile, glamorous and talented cover band – at least, in theory.

In actual practice, however, Hollywood Vampires play less like the never-aging, alluring creatures in their name and more like their fellow classic horror cousin, Frankenstein's monster: old, used parts stitched together with other old, borrowed parts in the name of a somewhat questionable mission, electrified enough to create a slightly shambling but loud and mostly functional approximation of its original ideal form. It’s alive all right, and it never turns into a fiery windmill disaster, but it’s also less than the sum of its grayed parts and not quite worth all the meddling with the dead.

And also Johnny Depp is there for some reason.

Fittingly cued by the classic 20th Century Fox title music, the Hollywood Vampires emerged on the BMO Harris Pavilion stage playing one of their set’s few original songs, "Raise the Dead," with Cooper as its baton-spinning ringleader and Depp, of course, wearing a hat. Because whether it’s on screen or on stage, it’s not a Johnny Depp performance without a hat – this one less goofy than most. The seven-part rock band proceeded to blaze through a holy grail of rock covers, from Bowie to Motorhead to The Beatles to The Who to Hendrix and T. Rex and many more, with the occasional original tune scattered in to spice things up.

With a set list that loaded, it’s no surprise that the show remained safely far away from a disaster and, rather, kept the packed BMO Harris Pavilion crowd on their feet for the entire 100-minute show. Even though it’s somewhat of a challenge to get too enthusiastic about a prime headliner spot granted to essentially the most glorified cover band in Hollywood, it’s admittedly hard to beat a set with time-tested, crowd-pleasing and energetic favorites like "Suffragette City," "Bang a Gong (Get It On)" and "Ace of Spades" – especially when it’s a showman like Alice Cooper leading the charge. Though relatively subdued, the rock legend still possesses a stage like few others can, needing only a few dramatic points and rock struts to dominate the audience's attention. 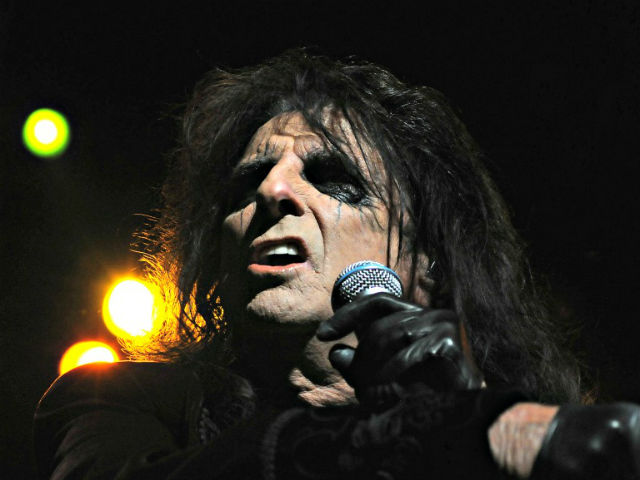 Meanwhile, Perry did most of the work on lead guitar, rocking out a few strong solos and even taking over the vocals for a cover of Fleetwood Mac’s "Stop Messin’ Around."

Unfortunately, while Cooper and Perry worked like the seasoned on-stage pros they are, the third part of their unholy rock trinity played more like an awkward third wheel. Put aside the actor’s recent box office woes and put aside the recent headlines about domestic abuse allegations – or at least try, though boy is it hard to just have a simple, mindless and happily nostalgic time and watch fans go nuts with that ugly, dark cloud hanging over his section of the stage. Judged solely on its own merits, Depp’s performance, musically and charismatically, made one wonder what exactly it is he brings to the all-star team other than a name.

Musically, the actor was restrained mostly to simply rhythm guitar (a very low-slung one for what it’s worth, especially early on when it seemed like if he bent his knees, it’d knock against the floor), letting Perry and company handle most of the heavy lifting and only occasionally taking over for an unmemorable solo or two. His night in a nutshell happened on "Stop Messin’ Around," when Cooper sounded like he said, "Show ‘em, Johnny," for a guitar riff – only for him to actually be shooting the solo over to guitarist Tommy Henriksen. Later, in the same song, Cooper pointed over to Depp’s area again – only for the solo to go to the keyboardist. All the while, a spotlight stayed glued to Depp, though it got hard to figure why.

Personality wise, Depp didn't do much to make up for things, sticking mostly to a few pleasant waves and the odd muffled aside. At the end, he stayed on stage longer than the rest to toss more picks to the crowd and make a couple more muffled murmurs, but during the show itself, the actor mostly just trundled back and forth across the stage. Using his blockbusters as a barometer, it was a performance more "Transcendence" or "The Tourist" than Captain Jack Sparrow (admit it, you just had to Google those movie titles). 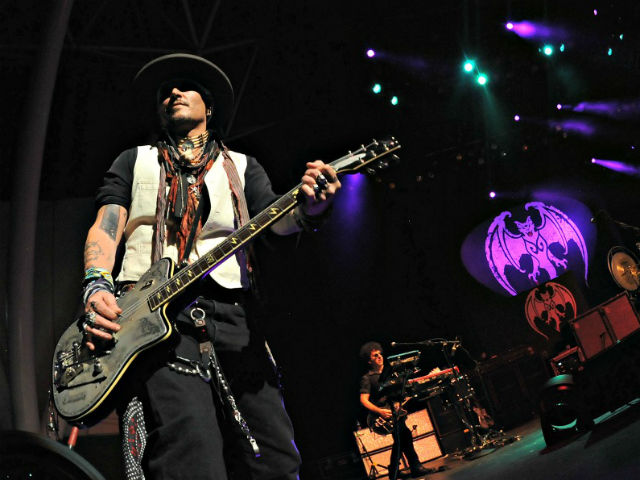 Depp’s generally unremarkable presence, however, speaks to a greater feeling creeping into my brain during the Hollywood Vampires show: What exactly is the point? I know, it’s rock; there doesn’t need to be a point or some greater motivation other than a good-ass time. But what read like a dream on paper, in person played like "Rock Band" for celebrity millionaires with some free time to kill.

The band’s general function is a tribute band, but much of the non-musical tribute material was sort of odd. The tone just never felt right, even from the opening moments when the jumbotron showed images of fallen rock legends – Lennon, Hendrix, etc. – with the phrase, "They came, they drank, they died," punctuated by a chintzy Halloween music cue. The odd feeling continued on as Cooper intro-ed the original tune "My Dead Drunk Friends" with explaining the band’s origins and noting, "Now they’re all gone except for me," to which the audience loudly cheered. I mean, we’re all happy Alice Cooper’s still with us, but what a weird moment to cheer a guy saying all of his friends are dead – all most certainly too soon.

That was one of the rare times there was a story for their fallen friends. For the most part, instead of any personal anecdotes, the intros were standard lead-in fare. Musically, despite having a diverse range of rock artists' material at hand, most of Hollywood Vampires' renditions melded into a relatively indistinguishable blur, so that aspect of the tribute didn’t quite manage to convey the spectrum of rock and what made each individual lost artist particular or special.

Forget a tribute band, though; how about simply as a mash-up of mega-stars? Depp fell short, owning the spotlight even less than he chatted with the crowd. Cooper was much more in his natural habitat and made for an enjoyable master of ceremonies, but are you really getting the full Alice Cooper live experience without the theatricality? And Perry often stole the spotlight, but are you really getting the most out of him as well, with so many others on stage cluttering up the mix? And in the case of all of them, doesn’t it feel a little odd to be doing "My Generation" and singing, "I hope I die before I get old," with a straight face at this point?

Of course, the song still rocks, as do all the classic songs on the set list; there’s a reason they’ve lasted for decades untarnished. And by the end, when the Vampires fittingly busted out Perry’s "Sweet Emotion" and, for part two of the encore, Cooper’s "School’s Out," it was impossible not to be swept up a bit in the little pocket Aerosmith and Alice Cooper concerts breaking out. For most of the show, however, despite the star wattage on stage, the Hollywood Vampires felt like it could be just any cover band on stage. Not a bad one, mind you, but just any one.

I wouldn’t be surprised if I’m an army of one when it comes to having a lukewarm time Tuesday night. The crowd sang loudly and cheered louder; they earned their encore (which also included Tiny Bradshaw's "Train Kept A-Rollin'"). But one imagines they may have been enjoying the idea of what they were seeing – Cooper, Depp and Perry playing Bowie on one stage! – rather than the reality. That’s the thing with fan fiction; it sounds as incredible as it does hollow.

"Raise the Dead"
"I Got a Line on You" (Spirit cover)
"Rebel Rebel" (David Bowie cover)
"Suffragette City" (David Bowie cover)
"Manic Depression" (Jimi Hendrix cover)
"Five to One" (The Doors cover)
"Break On Through (to the Other Side)" (The Doors cover)
"As Bad As I Am"
"20th Century Boy" (T. Rex cover)
"Bang a Gong (Get It On)" (T. Rex cover)
"Come Together" (The Beatles cover)
"7 And 7 Is" (Love cover)
"Whole Lotta Love" (Led Zeppelin cover)
"My Dead Drunk Friends"
"Stop Messin' Around" (Fleetwood Mac cover)
"Ace of Spades" (Motorhead cover)
"Pinball Wizard" (The Who cover)
"My Generation" (The Who cover)
"I'm Eighteen" (Alice Cooper cover)
"Sweet Emotion" (Aerosmith cover)