At 1 p.m. Friday, The Hop, presented by Potawatomi Hotel & Casino, will publicly announce that passenger service on the new Downtown streetcar will begin on Friday, Nov. 2 at noon.

At 1 p.m. Friday, The Hop, presented by Potawatomi Hotel & Casino, will publicly announce that passenger service on the new Downtown streetcar will begin on Friday, Nov. 2 at noon.

The announcement will be made at The Hop Streetcar Operations and Maintenance Facility, 450 N. 5th St. and Mayor Tom Barrett, Potawatomi CEO & General Manager Rodney Ferguson and Milwaukee Downtown CEO Beth Weirick are expected to speak.

If you can’t make it down there, you can watch on a Facebook live here. 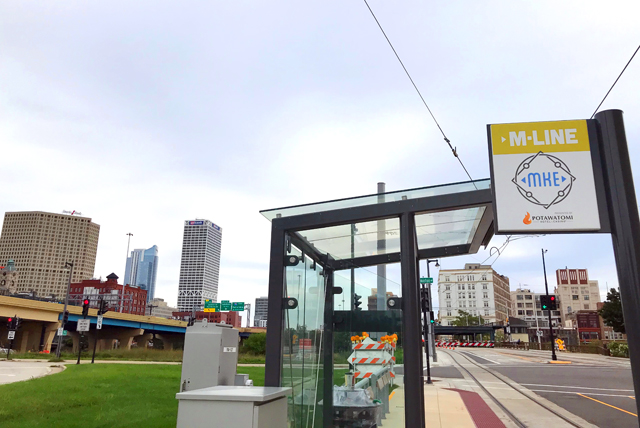 As part of the Potawatomi Bingo & Casino’s sponsorship of the streetcar all rides will be free for the first year.

For important tips and reminders on how to share the road with the streetcar, visit onmilwaukee.com/living/articles/hop-smart-streetcar-safety.html.

"This is a historical milestone years in the making and one we’re excited to celebrate with the entire community," Milwaukee Mayor Tom Barrett said in a statement Friday.

"The Hop will be a tremendous asset to the city and a key contributor to the renaissance we’re experiencing in Milwaukee. Whether you live Downtown, work Downtown or just enjoy experiencing all of the incredible energy, excitement and amenities the city has to offer, ride The Hop and help keep Milwaukee moving forward."

The start of service will kick off with a weekend-long "Grand Hop-ening" slate of events, Nov. 2-4, centered around Cathedral Square Park. There will be music and other entertainment, and activities.

Saturday will focus on businesses along the streetcar route and Sunday is aimed more at families, featuring kid-related fun along the tracks.

More specific details on the weekend’s programming will be announced as the event nears.

The return of the streetcar marks the first fixed-rail transit in Milwaukee in six decades and the five vehicles will service 18 stations on the M-Line every 10-15 minutes.

A second line, called the L-Line, will run out toward Milwaukee Art Museum, Discovery World and Summerfest, and is expected to open in 2020. Most of the tracks have been installed for this part of the system already but cannot be completed until there is progress on the Couture project, with which the streetcar will connect.

Read more about expansion plans – including proposals along Vel Phillips Avenue and King Drive – for the system here.