Hotel Madrid expected to open this fall in Walker's Point

Milwaukee, Ernest Hemingway, vermouth and Spain will all come together in the latest project from Stand Eat Drink Hospitality Group. Hotel Madrid is the culmination of over a year of work, resulting in a restaurant, bar and hotel unlike any others.

Construction has been underway for months and is nearing completion on the project at 600 S. 6th St., the former home of Pedrano's Restaurante. In fact, Hotel Madrid is expected to open as soon as the end of October.

The concept will advance the notion of authentic Spanish cuisine and culture in Milwaukee. But unlike MOVIDA, SED's flagship restaurant, Hotel Madrid will depart from the concept of Spanish tapas, offering diners a chance to experience another side of Spanish food and beverage. Various aspects of the culture and cuisine will be highlighted through four components: a restaurant, a bar and wine cellar, a patio and a two-room hotel and event space.

Here’s a bit of what you can expect.

Bodegón is the name of the restaurant, which will occupy an intimate space on the northern half of the property’s main level. Its name is derived from a term that means "pantry" or "tavern" reflecting an emphasis on rustic home cooking with an elegant, fine-dining flair.

Akin to its menu, the restaurant will reflect a rustic look and feel, with an eclectic mix of furnishings and decor that reflects traditional Spanish themes, including bull-fighting.

"Our idea for Hotel Madrid was to invite people to enjoy the Spanish culture and theme set in a modern Ernest Hemingway hunting lodge," says co-owner Andrei Mikhail. "With that idea in mind, I was able to use my personal experiences in Spain – and ties to bull fighting – to acquire original bull fighting suits as bold and unique pieces to showcase."

Offering dinner service Tuesday through Sunday, Bodegón will highlight various aspects of Spanish cuisine through seasonal menus – one omnivorous and one vegetarian – that feature both shareable large plates and entrees.

House-made will be the theme, with items including breads and charcuterie made on site. A butchering station will feature various cuts of prepared meats. And a large open kitchen will offer diners a view of the action.

A dry aging cabinet will show off cuts from Ney’s Big Sky and Strauss Meats. And a certified sommelier will be on hand to recommend wine pairings from Hotel Madrid’s extensive wine cellar – located in a tunnel from the early 1900s located beneath the restaurant – which will contain over 250 hand-selected bottles of wine and vintage French Champagne.

"I've put a lot of time into training and educating myself and the team in order to build the expansive wine menu," notes co-owner Aaron Garsonde. "It will consist of both new and old world European varieties along with a collection of special reserves to feature in our wine cave. It is definitely a source of pride for us."

An homage to the new-old bodegas in Spain where vermouth is the star beverage, Vermutería 600 will reflect an affection for the traditional-cum-trendy beverage  comprised of aromatized, fortified white wine flavored with botanicals. In fact, along with a wide variety of vermouths, the bar will feature a special house-made version, which will be available on tap. There will also be plenty of Spanish brandy, sangria and a domestic craft beer list.

Meanwhile, a craft cocktail menu created by Beverage Director Daniel Beres will focus on seasonal interpretations of 1930s vintage cocktails – of the sort you may have found Ernest Hemingway enjoying in Madrid.

The bar will also feature its own food menu, a paired down version of that available at Bodegón, which will offer both bites and more substantial options.

Double doors in the bar will lead patrons out-of-doors to what is slated to be an impressive patio space located just to the south. The patio, which will feature a pergola, picturesque landscaping and an artistically detailed accent wall, will seat 50 or more in an outdoor environment that provides a tranquil respite for clement days.

Currently, you can see the patio taking shape in this photo, which shows some of the landscaping, as well as beams for the impending pergola. 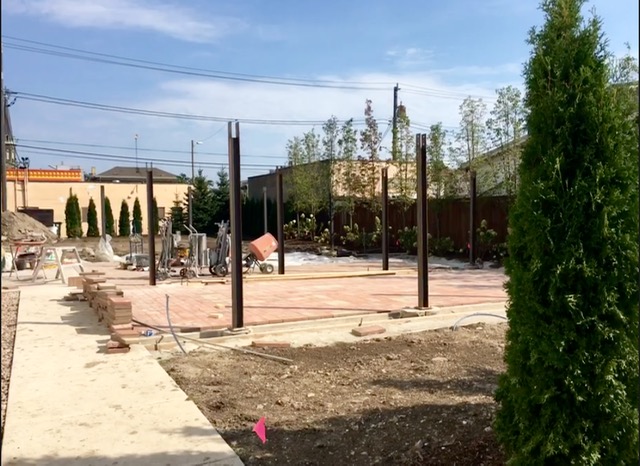 The boutique hotel component of Hotel Madrid will actually be completed as phase two of the project, expected to follow shortly after the opening of the restaurant and bar.

It will feature two lofted spaces with private porches which showcase both the industrial flair of cream city brick and the colors and vibrancy of Spanish inspired decor. The spaces will function a both overnight accommodations for guests, as well as private event spaces for dinners or gatherings.

Watch OnMilwaukee for additional updates about Hotel Madrid as they become available.