Looking for an unusual place to watch the Packers take on the Falcons this Sunday in the NFC title game? Hoyt Park in Wauwatosa has the perfect spot. Located between The Landing Beer Garden and the Hoyt Park Pool is a Grand Hall that was built in the '30s by the WPA.

If you’re looking for a cool and unusual place to watch the Packers take on the Falcons this Sunday in the NFC Championship Game, Hoyt Park in Wauwatosa has the perfect spot.

Located between The Landing Beer Garden and the Hoyt Park Pool, 1800 N. Swan Blvd., is a Grand Hall that many who use those facilities might not know much about. With its arched ceiling and wood paneling, it’s a great space and one that can’t exactly be called a secret. 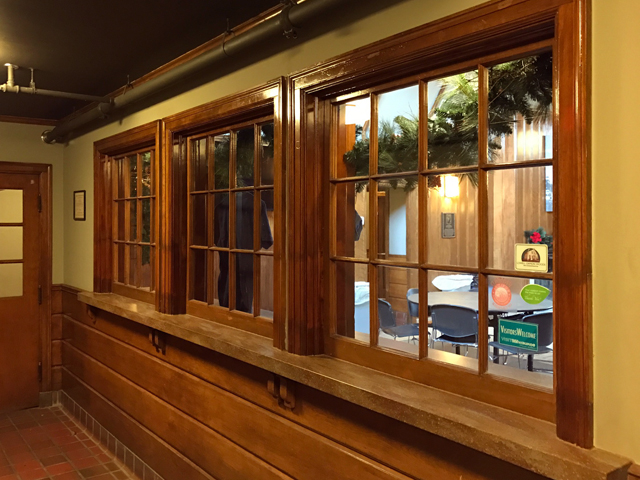 The arts and crafts-style hall, inside a colonial revival bathhouse, was erected in 1938 as part of the same Works Progress Administration (WPA) Project that created the original pool here – as well as stone retaining walls and the lovely and recently restored suspension footbridge.

When I walked in, I was immediately reminded of the much-larger hall atop the former administration building at "the Eschweilers" nearby on Swan Boulevard, though admittedly any resemblance is mostly in spirit rather than actual design.

For decades, the room was used as the pool’s basket room, where bathers’ street clothes were stored in baskets while they used the pool. 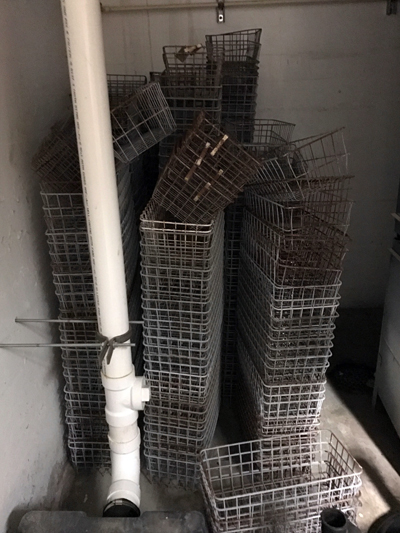 These days it’s a rental hall, and among the events held here are big-screen TV viewings of Packers games, including the upcoming conference title game this weekend.

"The entrance to the pool was where the lobby for the beer garden is now," says Kit Slawski, executive director of The Friends of Hoyt Park & Pool, which renovated the pool and created the beer garden and has a 55-year lease from the County on the property.

"I don't know at what point it went from being this beautiful community room, to the basket room. Some of the articles that I have found, reference this is as being used for a seniors' center or whatever."

On each end of the room – which has floor to ceiling wood paneling – there are three windows into a foyer. Here, bathers handed their clothes over the granite countertop to employees, who would put them in a basket and give the bather an identification tag to pin to the swimsuit. In those days there was a divider running the width of the room to separate the men’s and women’s sides.

The room – with all that wood shelving for baskets and the divider removed – has its original terrazzo floor that incorporates shuffleboard courts and its grand fireplace. A couple north-facing dormers that had long been closed up are now re-opened to allow in more light. An attic space opposite the dormers, which was often used as a place for the lifeguards to hang out, has since been sealed off. 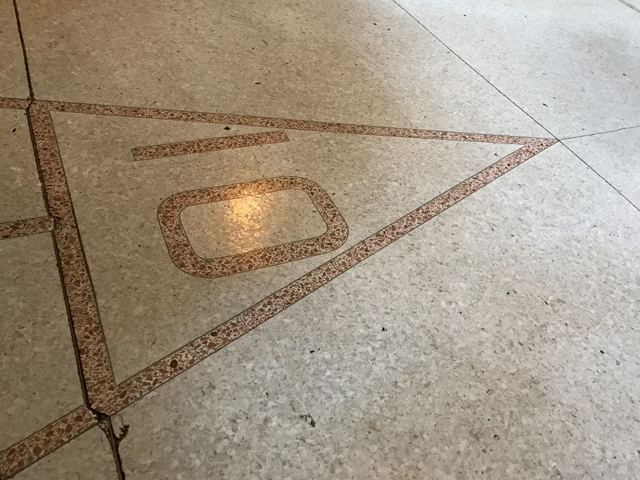 Last year, the hall underwent some modernizing upgrades, including the installation of acoustic panels, additional lighting, the addition of a "hidden" projector and screen, and flat screen TVs. Moveable wooden benches can be used to create a snug in front of the hearth.

During all the renovations – including the massive ones that readied the building for its grand 2011 reopening – craftsmen worked to restore original fixtures – including door push bars and hinges – and match woodwork wherever necessary. 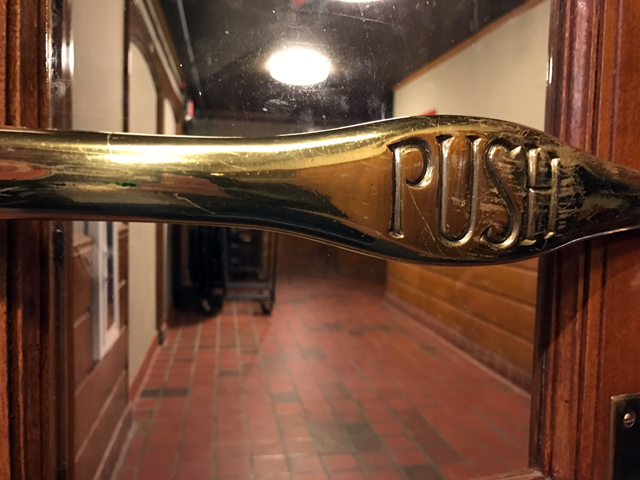 One of the most fun features is what appears to be a closet door. Workers had to create a new skeleton key to unlock it and once inside, they realized it was simply an extremely shallow key closet, one that still holds the keys to every door (each portal bears an identifying number above it) in the place. 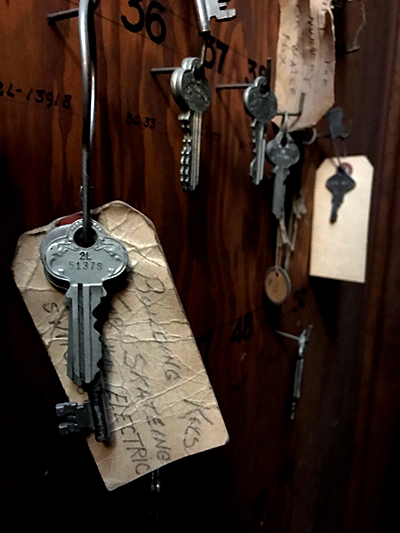 The result is quite stunning. For someone who has used the pool and visited the beer garden numerous times, finding out about this space was a revelation. But anyone who used the pool from its late 1930s debut on, knew it was here.

Just ask the dozens of folks whose names are scrawled on the basement walls, in often wonderfully executed little murals (see photo below).

These are the teams of kids who staffed the pool over the years. The 2016 group is still working on its contribution, which sits alongside lists of names dating back to the 1990s.

Folks who used the pool back in the basket days will likely be excited to hear that stacks of the original baskets survive down there, too, in a room just outside the space that houses the pool’s filtration, UV, heating and other systems.

From Tosa’s earliest days, folks would swim in the Menomonee River, which runs through Hoyt Park. By the early ‘30s they were making use of a sand-bottom "swimming hole" that was filled each year by the fire department with river from the Menomonee. The County then ran the first real pool on the site from 1939 until 2003, when it had fallen into disrepair, beset by structural issues and leaks. 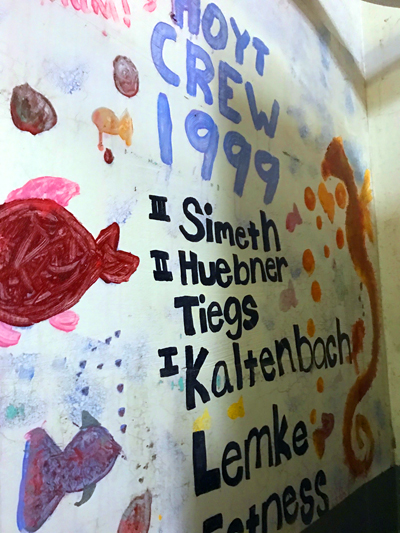 But it wasn’t closed long before the community began discussing ways to re-open the pool. In 2006, Friends of Hoyt Park & Pool was formed and within five years it had raised funds and completed renovation of the bathhouse and pool. The beer garden followed two years later.

"We opened up the beer garden in July 2013, and that was the first time that people could actually see in here," says Slawski. Because we've got the concessions in the old lobby. People would peek through and say, ‘What is that room?’ Our rentals tripled after 2013, just because it brought so many more people to the park, and they could see this."

In 2016, the Grand Hall exceeded 100 private rentals, according to David Paulsen, the Friends group’s director of communications. Reservations, so far, he added are on pace to double that number. The space is used for company meetings, parties, class reunions, weddings and other events. The hall hosted 72 events in 2015.

Some, like a group from Northwestern Mutual, make use of the shuffleboard courts. Many, in winter, like a fire in the hearth, and Slawski says the hall is already on its second face cord of wood this year. The place is growing more and more popular.

"Oh, it's just amazing," she says. "We have four rentals this weekend plus the Packers game on Sunday afternoon, too," she told me when I visited last week. "Wauwatosa is fortunate to have a space so steeped in history available for the community’s use, and we are honored to maintain the Grand Hall as a beautiful and enduring local resource."

Rental rates for the air-conditioned (in summer) Grand Hall start at $285 for three hours and include tables and chairs. Members of the pool get a 10 percent discount. For more information or to make a reservation, visit tosapool.org/rentals, email partiesandrentals@tosapool.com or call (414) 302-9160.