When Milwaukee artist Ariana Huggett started to leak out images of the paintings for her upcoming show, "Old Schools" - on view Saturday and Sunday, Sept. 19-20, in conjunction with Doors Open Milwaukee, at the Material Studios + Gallery in the Third Ward - a lot of folks took notice.

My passion for Milwaukee's old schoolhouses is no secret to OnMilwaukee readers. It's a subject I've explored extensively and I've even written a book about these landmark neighborhood buildings.

But I'm not the only one. When Milwaukee artist Ariana Huggett started to leak out images of the paintings for her upcoming show, "Old Schools" – on view Saturday and Sunday, Sept. 19-20, to coincide with Doors Open Milwaukee, at the Material Studios + Gallery, 209 E. Buffalo St. in the Third Ward – a lot of folks took notice.

The series began with a series of seven paintings commissioned as a birthday gift for a spouse, but has since grown to include more schools. Now, at least two of those school communities are raising money to buy their respective paintings to display in their buildings.

I asked Huggett about her inspiration to paint the buildings and what she's learned along the way.

OnMilwaukee: Can you tell me what inspired you to paint the schools?

Ariana Huggett: Last fall I was invited to take on a commission with the only stipulation being that it feature the exterior of a historic Milwaukee building. It was pretty wide open for me. The focus of my artistic practice in recent years has primarily been interiors, so I was intrigued by the challenge and it got me thinking about the buildings that I pay attention to.

I became aware of numerous public schools while I bicycled across Milwaukee to work in Wauwatosa. One in particular caught my attention, Garfield Street Elementary School. Just down the street a new private religious school expansion was being built while I noticed that this grand old building up the street sat shuttered. It brought home the issue of school privatization for me.

So after thinking about it for a while, and probably after a dog walk past Fratney Escuela in my Riverwest Neighborhood, I proposed to my patron that I paint a historic Milwaukee School Building. After some discussions, it grew to a commission of seven paintings. It’s probably around that time that I started doing research on the schools and came across your book at the MPL and your articles for OnMilwaukee.

OnMilwaukee: What have you discovered from painting them?

Huggett: I discovered the amazing commitment that the city once had for public education. Milwaukee is a city with such a rich progressive history. I’m not originally from Milwaukee, but I’ve now lived here for half my life. The city has so much going for it by virtue of its commons. When I first moved to Wisconsin, I was really impressed with the parks and how great the education system was in the state. I value education and believe that knowledge is the key to empowerment. It breaks my heart to see the gains made during the progressive era being rolled back.

Aesthetically the old school buildings are a powerful presence. They rise up above their neighborhoods with high pitched roofs. They are lavished with amazing details in ornaments and brickwork. They stand as pillars in the community the way the neighborhood churches do. I’m impressed by contributions of artisans and the craftsmanship as well as the fact that many were designed by Milwaukee’s star architects of the time.

OnMilwaukee: What did you get out of doing it, from an artistic standpoint?

Huggett: I like history and doing research. I like spending time studying my subject matter and gaining new insights. It’s given me a new appreciation of the city. Now when I walk around my neighborhood, I notice what’s original to the housing stock and what’s been changed. I pay more attention to the architecture of the city in general. One of the elements I’ve come to appreciate about these buildings is the attention to line and visual play that run through their structure and decorative elements.

OnMilwaukee: Will you do more?

Huggett: I think so.

OnMilwaukee: Any favorites in the series? 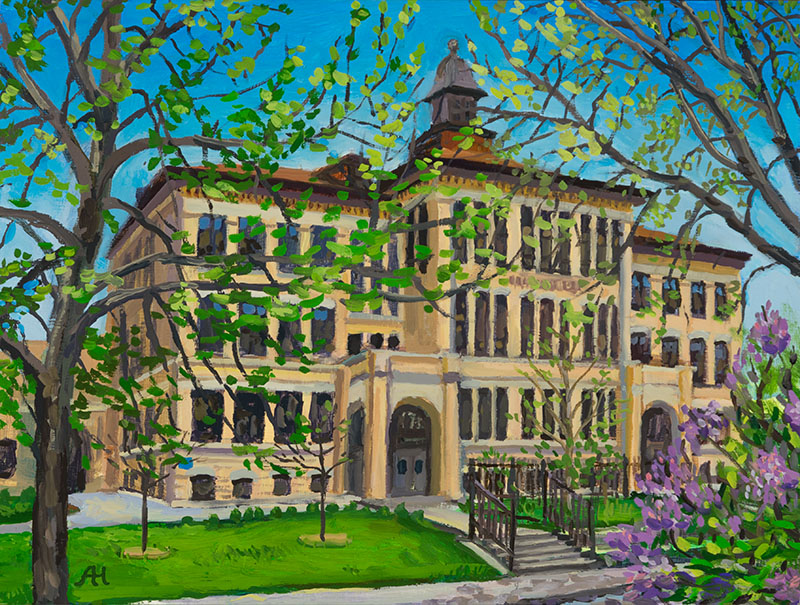 Huggett: That’s tough because I like them for different reasons, and I almost always like the most recent painting the best. Eight of the paintings are studio paintings and three were done on location – 5th Street, Fratney (pictured above) and Maryland Avenue Montessori. The studio paintings are more involved due to size and the composite element. I’m pretty happy about the shift from night to dawn in the painting of Kagel and the gothic feel of The Jefferson School (pictured below) thanks to the scraggly trees in front of the Best Place.

I’d never painted a building on fire before, so the Garfield School was fun and it’s dramatic. I was drawn to 37th Street School from the get-go even though I heard it disparaged at your panel forum last December. I think it’s a well proportioned building that’s elegant in its simplicity. It probably appeals to my modernist training. That building in particular strikes me as rather tragic. 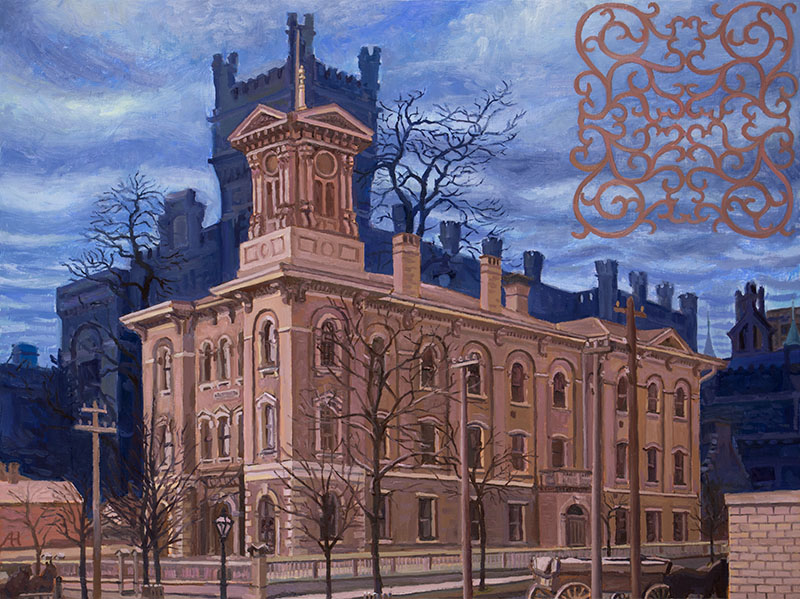 OnMilwaukee: How did you decide to approach some like Garfield as history paintings and others more straightforwardly, for lack of a better word.

Huggett: You’ve mentioned school fires in your book and in articles. I have a copy of the original plan of Garfield that came from the MPS archives. I also have a copy of a photo from 1927. If you compare the way it looks now to the plan, you’ll see that it’s been altered and in that old photo you can see a difference in the patina of the bricks. The front middle section has three peaks. It looks pretty silly. If you look at the plan, that section is more like Kagel or Golda Meir with a singular tall peak and a cupola. I figured it was altered after the fire and it must have occurred before 1927 when that photo was taken. With that one in particular, I was having difficulty wrapping my brain around how to approach it with the way it looks now combined with the way it might have looked before the fire. Painting it on fire was the solution.

About the three that were made on location, they were painted after I completed the first seven commissioned paintings. The commissioned paintings were started last fall and I worked on them over the winter months into early spring. Just in time for good weather! I really enjoy painting from life. It’s an immersive experience that’s different from the studio process. When I paint from life I’m responding to and interpreting what’s in front of me. I would like to do another painting of Maryland Avenue Montessori because it has so many great vantage points – maybe a composite.

OnMilwaukee: I noticed too that some, like Vieau, include different touches like the year it was built.

Huggett: As you know, many of the buildings have amazing details. If I just presented the whole building, a sense of the attention to detail would be lost. It was a way for me to give more information about the building. People who’ve know the evolution of my work over the years have commented on how these paintings loop back to earlier concerns of mine. I love ornamentation and pattern, so it was a great opportunity for me to integrate these types of visual elements back into my work.