Hurray for the Riff Raff shares its music, message on the Summerfest stage

When I first heard the name Hurray for the Riff Raff, I confused this group with the infamous Texas rapper Riff Raff who sings "Tip Toe Wing In My Jawwdinz." To my relief - and I'm sure to others - that's not who I saw at Friday night at Summerfest.

When I first heard the name Hurray for the Riff Raff, I confused this group with the infamous Texas rapper Riff Raff who sings "Tip Toe Wing In My Jawwdinz." To my relief – and I’m sure to others – that’s not who I saw at Friday night at Summerfest.

The name Hurray for the Riff Raff definitely reflects the group's lyrics and music. Riff raff can be defined as "good-for-nothings" or "lowlifes" – and throughout the set, lead singer Alynda Segarra stood up for those people, those who don’t have a voice. She wasn’t afraid to share how she feels, which was made obvious as soon as she stepped onto the stage, wearing a shirt that stated, "No human is illegal," as well as a jean jacket with a Puerto Rican flag in a powerful fist.

Although the set had a strong message, it didn’t start off so powerful. While the audience sat around the Johnson Control World Sound Stage for 10 p.m. to hit, the band went into a sound check. Not quite sure what the circumstances were but they had to spend almost the full hour after the 8 p.m. performer getting their audio in check.

The sound and equipment were not up to their standards, and you could see the frustration as they endlessly tried to adjust. Segarra kept going back and forth trying to chat with the sound crew to get it all worked out, but it seemed like things were off still.

They dove into a song and some chords in an attempt to straighten it out, confusing the audience in the process. Some of them stood on the benches and began cheering, mistaking it for the start of the performance. It kind of ruined the magic of the opening reveal of the band, but you got to do what you got to do to make a good performance. With 10 minutes to spare, they finally rolled off the stage before it was time to start. 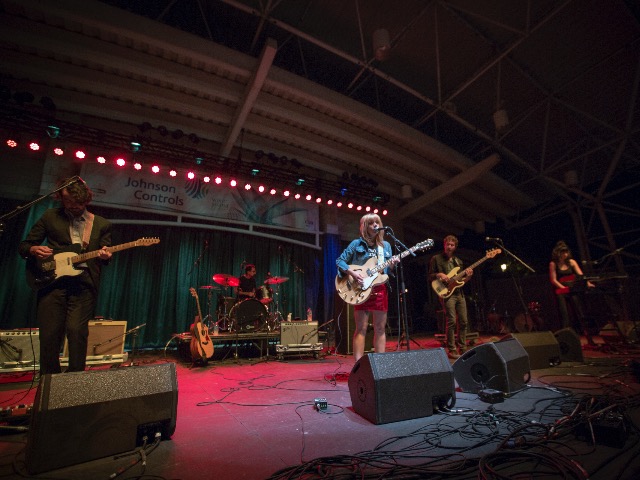 The band returned and opened the set with "Nothing’s Gonna Change That Girl." They rocked it out, but you could still feel the frustration as Segarra fidgeted with her earpiece, clenched her guitar and ran over to the sound guy. She still managed to hair flip, headbang and stomp her feet through it all. However, it wasn’t until the third song, "Hungry Ghost," that she loosened up. She lost the guitar and started to move and dance more. She was moving around the stage and grooving her body from head to toe. It was suddenly as though the sound issue never happened; she started to smile, swing her hip and jump around the stage, her uplifted mood contagious for the crowd.

Her band started to quickly mold smiles, playfully hitting the notes on their instruments and swaying their bodies to the beat. The audience even started to pick up the dancing and head bops as Segarra belted out the notes. Her music was interesting, as each song felt like it fit in a different genre from the next. One sounded a little punk. Another sounded like it could be a tango. Some had a bluesy, country vibe.

It's less surprising once you discover her musical background, being born to Puerto Rico with its musical influences but then growing up in the Bronx and developing a love for Motown. Then, in her early years, she spent time going to hardcore punk shows. All of this makes her discography a melting pot of these influences, making a sound special to her own self.

Yet the eclectic melding of genres didn’t stop Hurray for the Riff Raff from having a smooth setlist, her twangy voice connecting it all together. When she sang, it just felt natural and effortless. She would hold a note and it didn’t look like work at all. You can tell she is just naturally talented. She also demonstrates a lot of passion as she sings her lyrics. You can tell she genuinely means what she is singing and her lyrics are things she really believes in.

"Power to the youth!," she exclaimed before diving into her unreleased song "Kids Who Die." She explained how this song was inspired by a Langston Hughes poem, and how she wanted it to express that we need to stand by the youth who are trying to make the world a better place but are frightened by the world. When she sang these powerful lyrics, her body jolted to the beat, clearly feeling the music to her inner core and in her heart.

She also talked to the audience about her song "Pa’Lante." She explained it means to move forward, and she believes, "Forward is where we gotta go." Her vocalization on her culture, her identity and her thoughts on the world really drew people in. Her audience started kind of sparse, but as she shared her messages and songs, more and more people joined at the stage. The sound of her singing voice was one thing, but the audience was definitely hooked and intrigued with what she had to say as well. 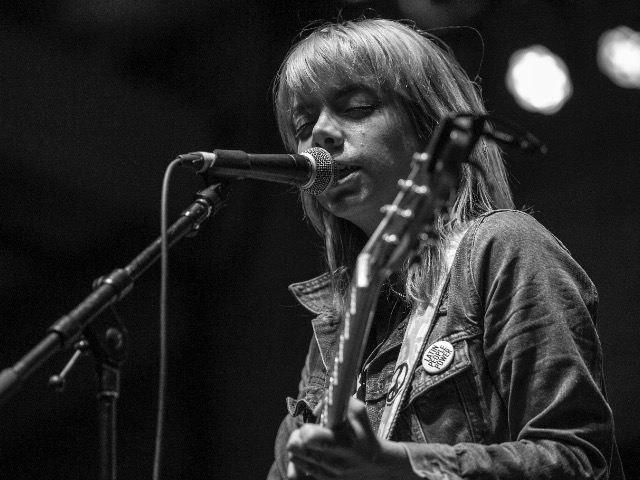 She closed the set by announcing "the only boss I listen to," diving into a cover of "Dancing in the Dark" by "The Boss" himself, Bruce Springsteen. The audience went crazy. People were shaking the bleachers from dancing on top of them so hard. The band hit the last note, and Segarra opened her jean jacket to reveal her shirt once more: "No human is illegal." She then threw a fist up into the air and headed off stage. The audience went into applause and cheered for a few minutes, but no one came out for an encore – respectable.

Hurray for the Riff Raff brought some change to Summerfest. Although people are there for the music, and it’s fun to hear artists play the hits you grew up on or enjoy, it was nice to also hear some music that made a statement. We live in a city with problems and a world with even more, so having Hurray for the Riff Raff there to speak about it was definitely an unexpected, but much needed, part of Summerfest.