Indeed Brewing Company is just hours away from swinging open the doors to its new Walker's Point taproom at 530 S. 2nd St. But the brewery, installed a few months ago, has already been humming, cranking out beers to be served in the new venue. We went inside Thursday for a peek.

Indeed Brewing Company is just hours away from swinging open the doors to its new Walker's Point taproom at 530 S. 2nd St. But the brewery, installed a few months ago, has already been humming, cranking out beers since July to be served in the new venue.

A ribbon cutting event is set for 3 p.m. on Friday. 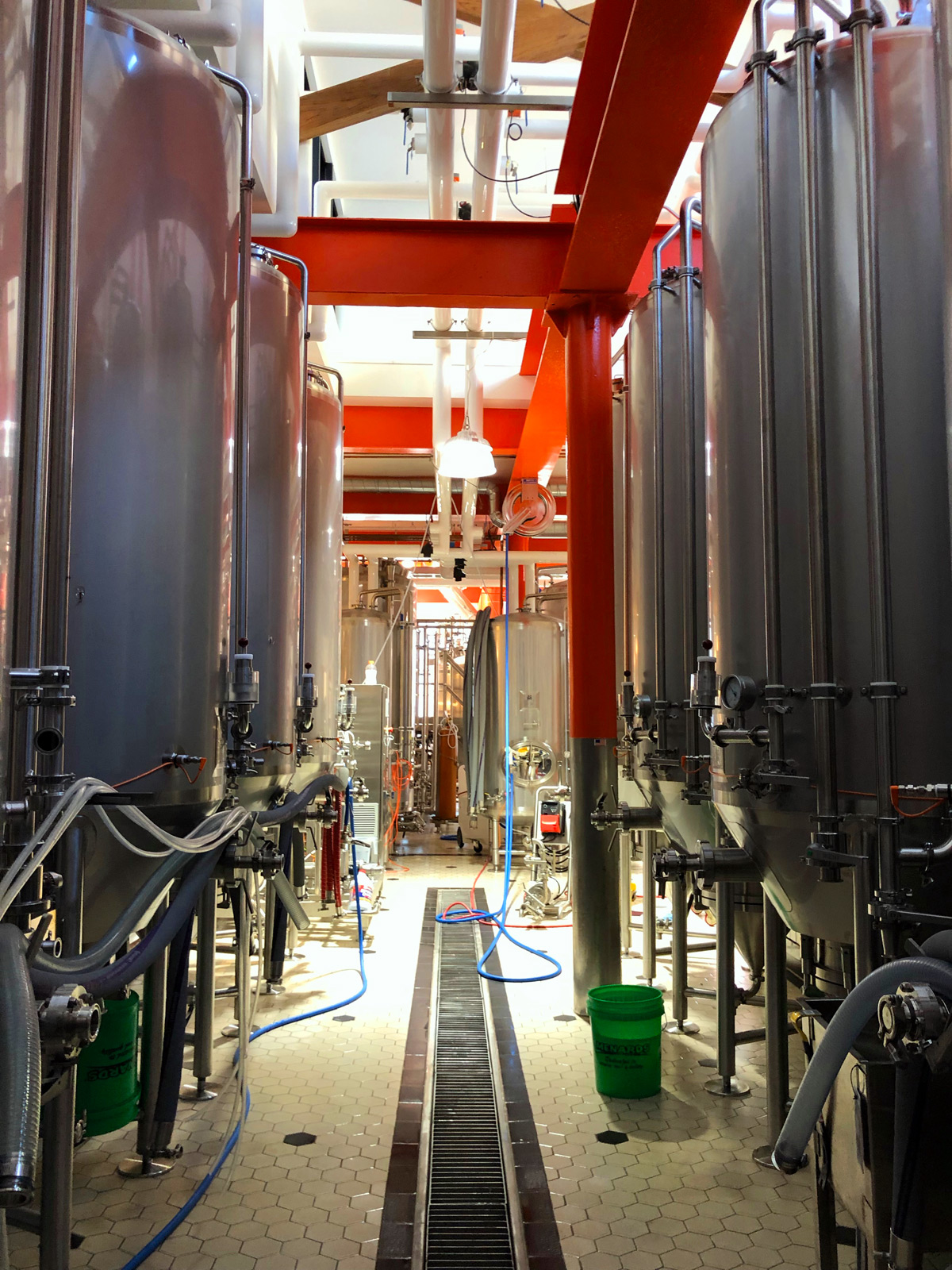 The brewery and taproom is the first expansion for the seven-year old brewery, based in Minneapolis. The facility was announced last November.

"We want to distribute beer in Wisconsin and be successful with it, but Wisconsin is a really tough state to be successful in, especially if you are from out of state," co-owner Thomas Whisenand told me when I visited in May.

"People from Wisconsin love Wisconsin products. So, the second part was to find a way to be relevant in Wisconsin. Building a brewery seemed like a good way to do that."

He also said that Indeed fell in love with Walker's Point pretty much right away.

"We were looking in Milwaukee and were sold on Walker's Point pretty quickly," he said. "You've got some really good restaurants nearby that have been successful and open for a number of years ... It just has a feel very similar to what we have in Northeast in Minneapolis." 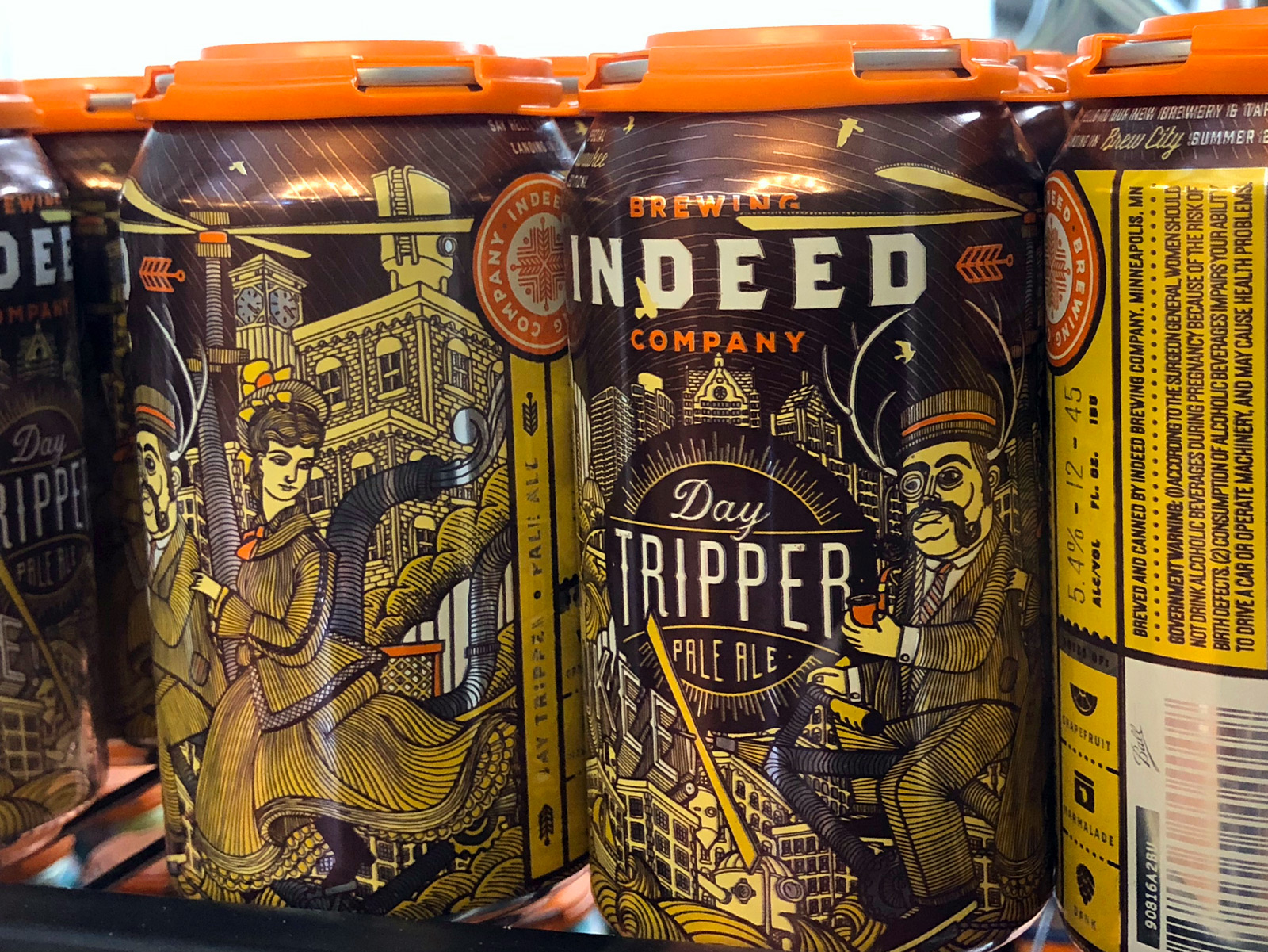 According to Whisenand's partner, Nathan Berndt, the brewery is also perfecting a new stout called, Maple Stick Stout, based on a maple-infused pastry at a favorite bakery near the Minneapolis brewery.

I went back Thursday for a first look at the nearly finished taproom and brewery. 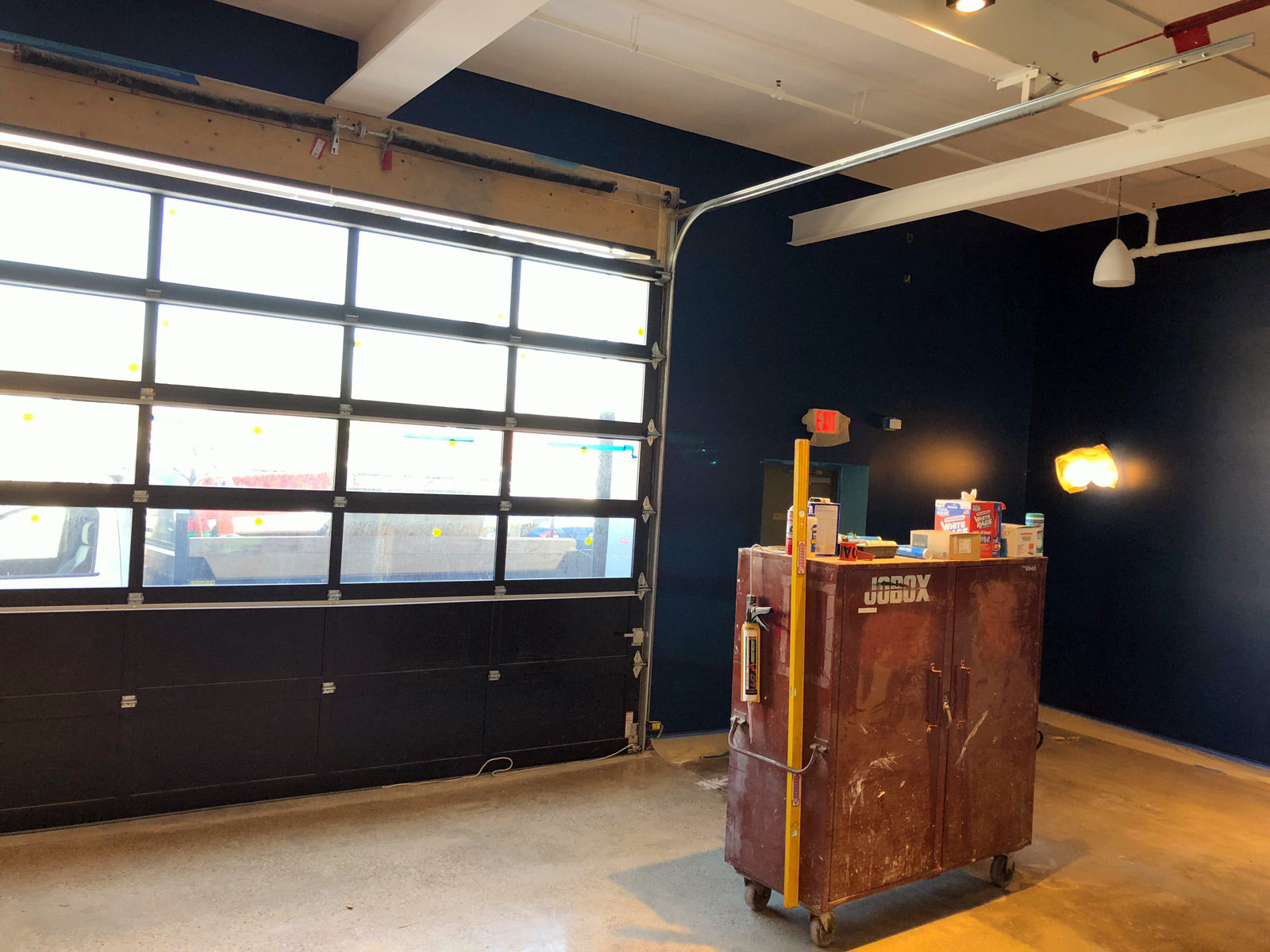 Outside, new concrete was being poured on the sidewalk and the Indeed sign awaited installation. Inside, workers were putting finishing touches on everything from the back indoor/outdoor beer garden (pictured above), the back bar (pictured below) – which Berndt says is, "A Hamm's back bar, we're not sure from where, but most likely a tied house" – and darn near everything else. 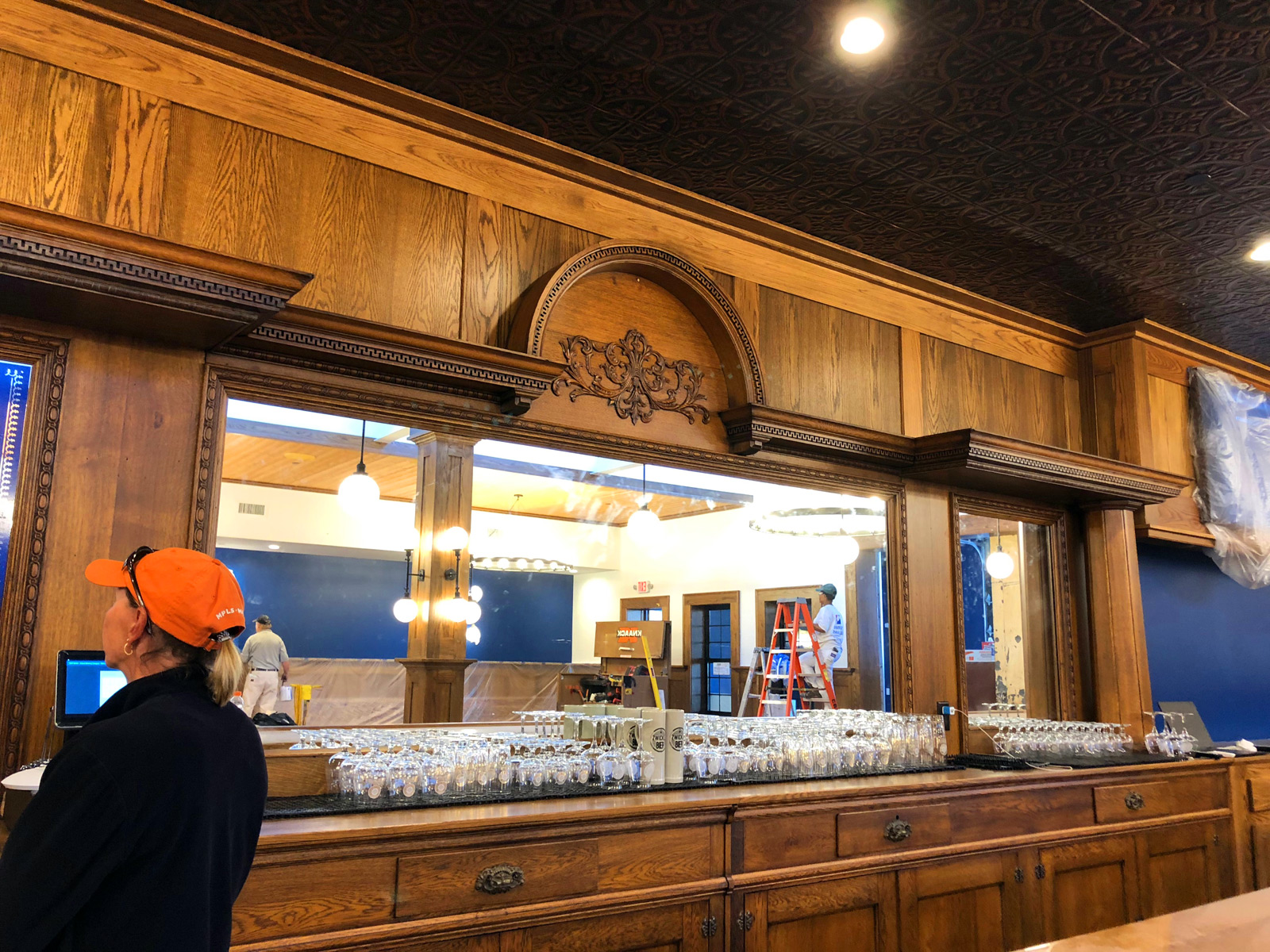 Merch was hung on racks behind plastic and in big tubs to protect it all from the dust and, up front, the brewery was a hive of activity.

It's plain to see why Indeed moved the ribbon cutting back from the planned noon to the current 3 p.m. start time. But, says Berndt, make no mistake, Indeed will indeed be open. 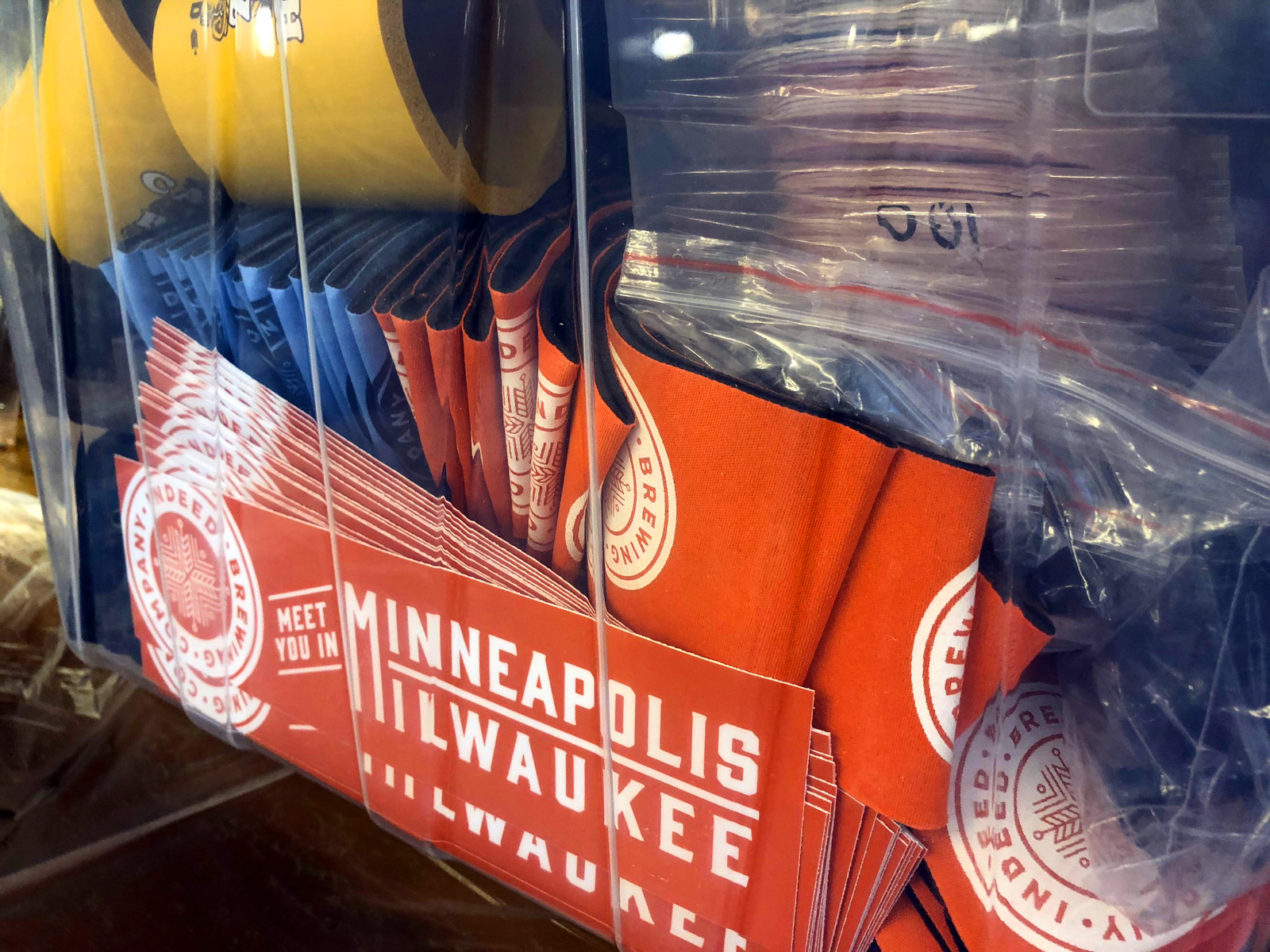 "It might not look like it but it’ll be ready," he said. "I’ve done enough of these to know. It’s amazing how quickly it goes. Tomorrow you won't even know these guys were here working."

The transformation of the space is stunning, with a long wood bench running along one wall of the taproom and big round chandeliers that recall a classic beer hall.

If you want to see some "before" images, check out the progress report I did last spring. Here are some more images taken Thursday as Indeed preps for its big opening day: 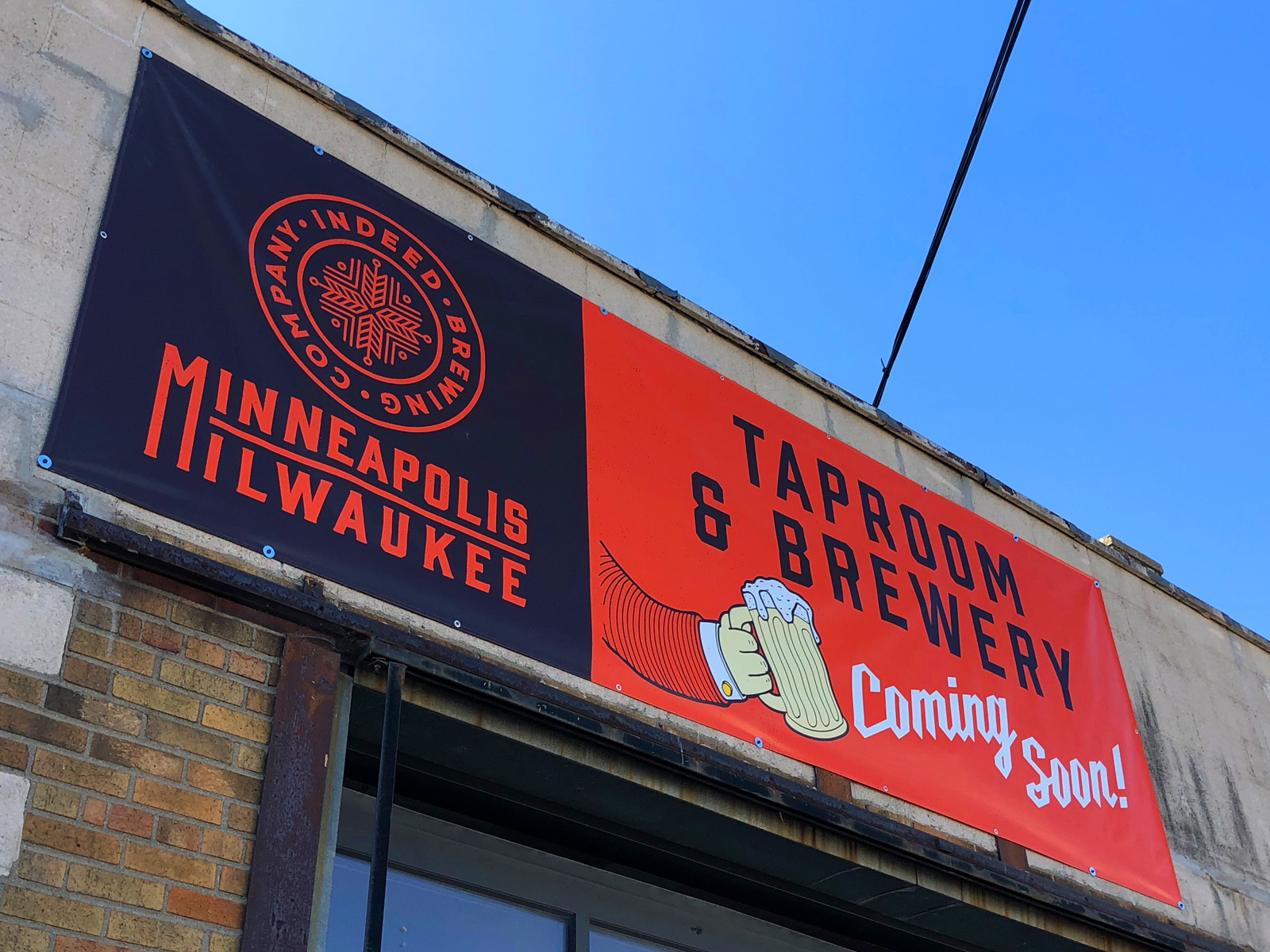 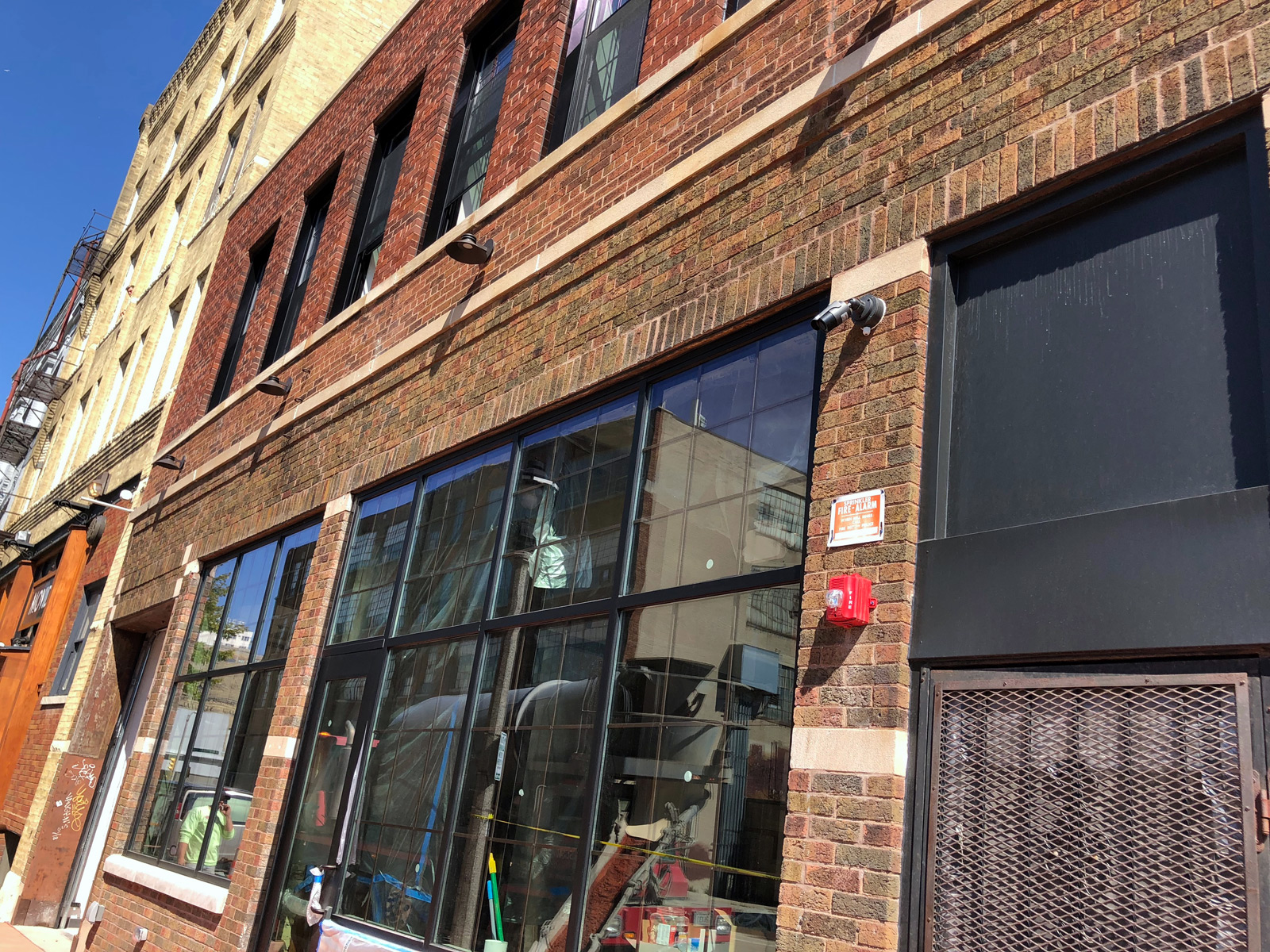 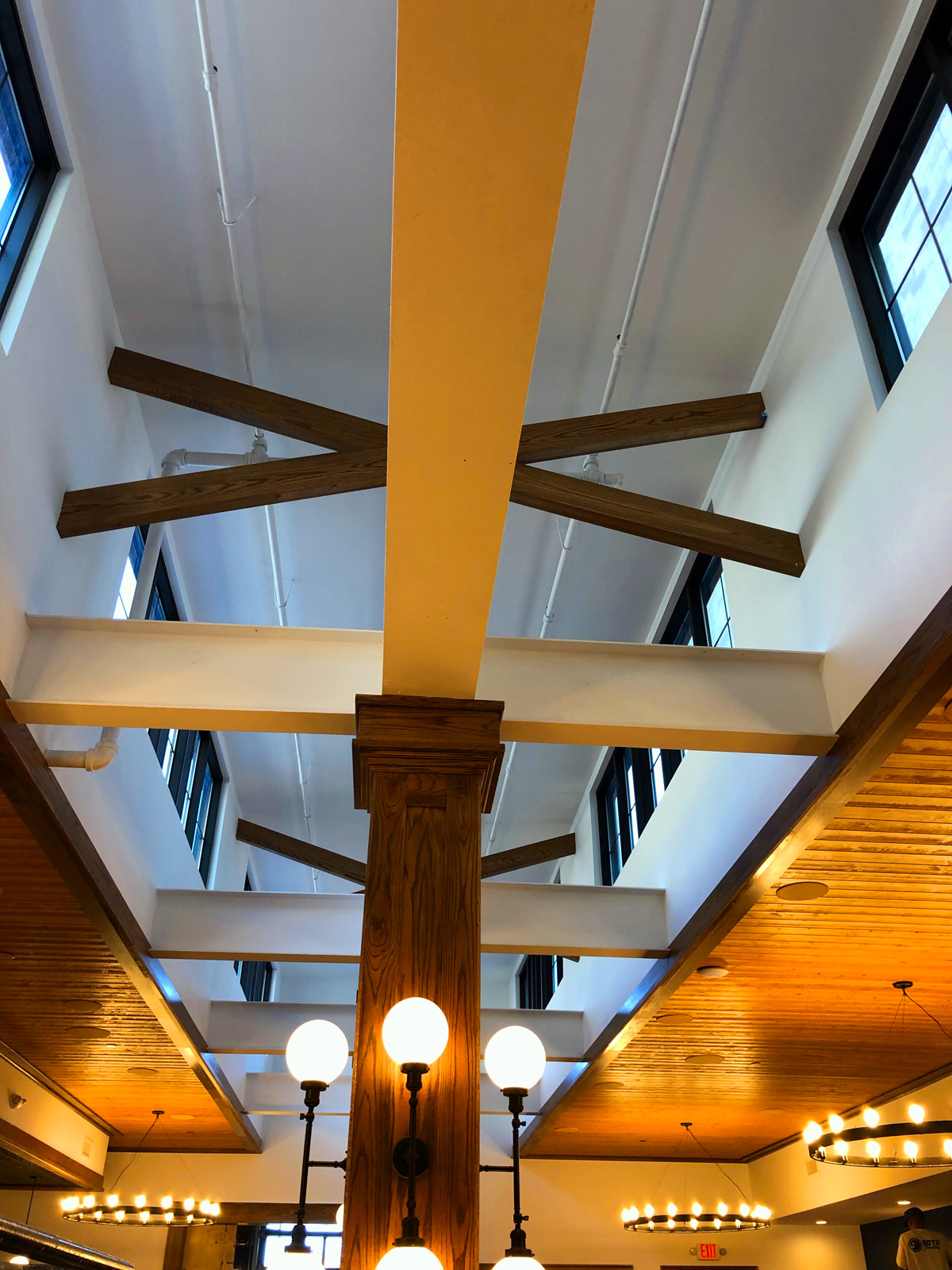 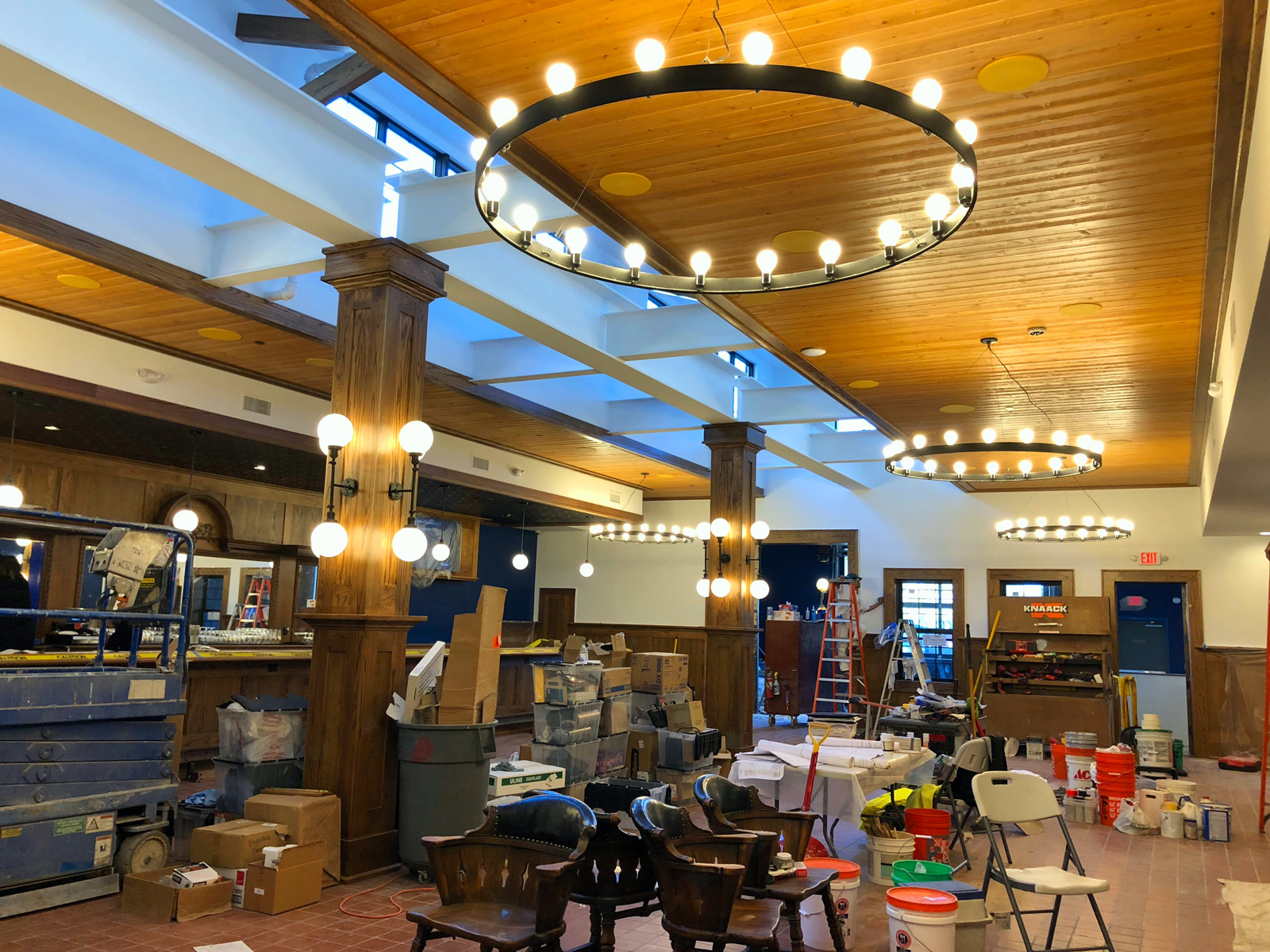 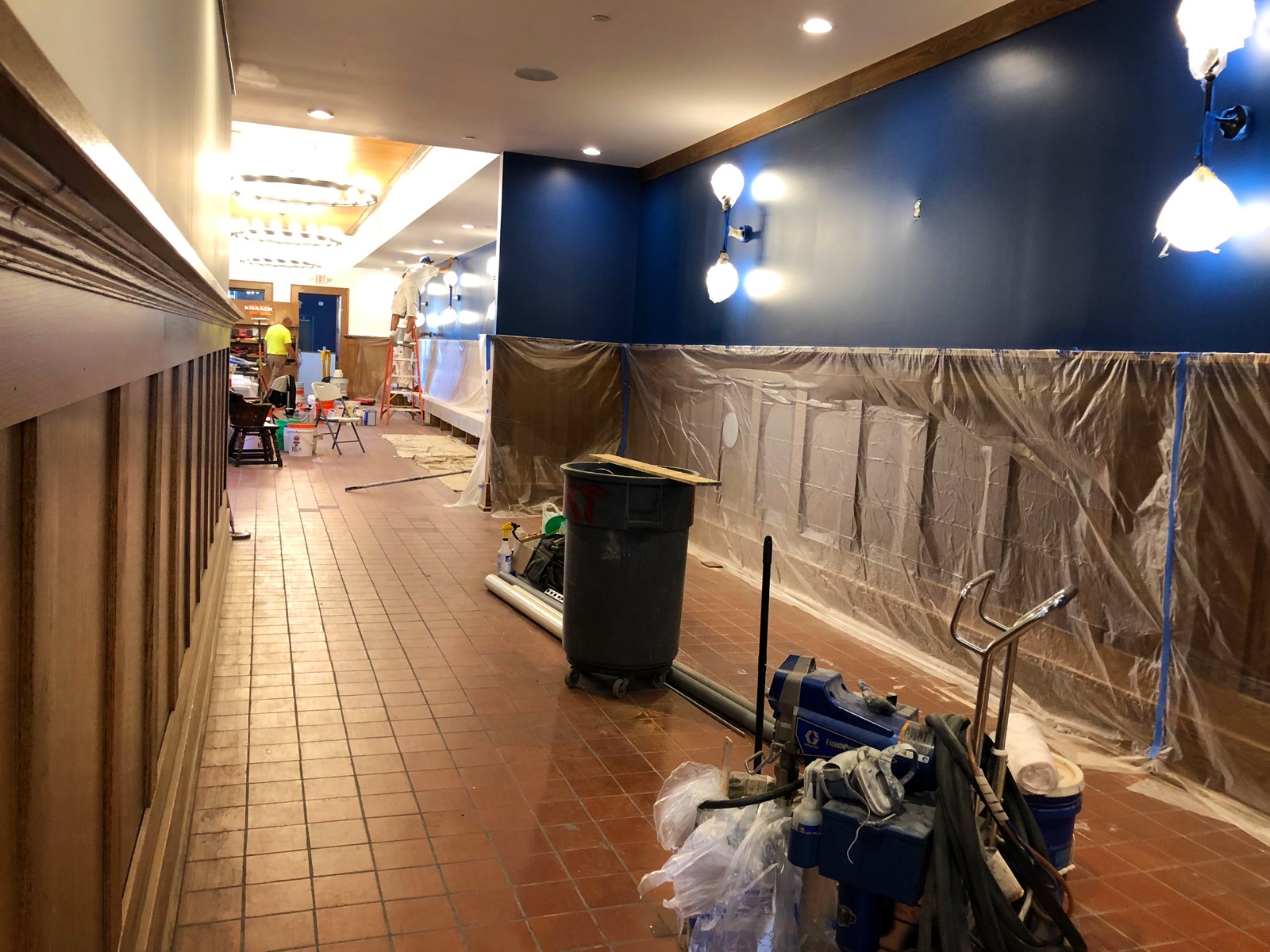