Punch Bowl Social will host a ticketed grand opening bash on Saturday, March 9. But we sat down with CEO Robert Thompson to get you the scoop on what you can expect from the new "eatertainment" venue.

Beginning Saturday, March 9, Milwaukeeans will get their first taste of Punch Bowl Social, a food, beverage and entertainment phenomenon that's been named among the hottest concepts of 2018 by Nation’s Restaurant News declared one of the world’s most innovative companies by Fast Company.

The Milwaukee location will debut in the Fiserv Forum Entertainment Block at 1122 N. Vel R. Phillips Ave. with a grand opening party that will take place from 6 to 8 p.m.

Tickets are $20 each and include craft beverages, free games and an opportunity to sample the entire Punch Bowl Social food menu. Proceeds from ticket sales will be donated to Running Rebels, a local nonprofit that engages, mentors and guides Milwaukee youth in an effort to ensure their future success.

But before you go, we've got everything you need to know about the country's hottest "eatertainment" venue, right from the source: CEO Robert Thompson. 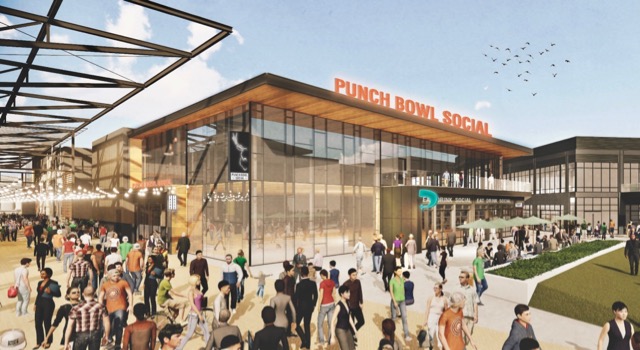 What is Punch Bowl Social?

Punch Bowl Social has been called many things, from an "adult playground" to "Chuck E. Cheese for grown-ups." And that makes sense.

After all, the concept – launched by Thompson, an industry veteran – combines a menu of scratch-made fare and craft cocktails with entertainment including classic arcade games, bowling, table games, billiards and private karaoke rooms.

But unlike other big box entertainment concepts like Hard Rock Cafe, Dave & Busters and Planet Hollywood, Punch Bowl Social puts as much emphasis on well-executed food and drink as the entertainment it provides.

It's a differentiator Thompson attributes to PBS's success as well as its appeal to millennials, a group that Thompson credits with generating the pervasive buzz around the concept.

"I’ve been doing this since I was 25, and it’s my job to stay focused on what’s current," he says. "Millennials are so interesting … and they’re the most influential that we’ve ever seen. They’re influencing Gen X and Gen Y. So we’re really casting a wide net when we market to them, because it touches the generations before and behind."

All in all, Thompson says about 71 percent of PBS customers are under 40, but he points out that also means that 29 percent are over the age of 40, giving the concept a truly diverse mix of regulars.

It's all about the food

The Milwaukee location will feature 24,500 square feet of space spread out over two levels. And every detail guests will see, hear, taste and experience stems from an expertly-honed formula for fun designed by Thompson.

In the years before launching PBS, Thompson spent his career running high impact experiential bars and boutique food forward restaurants. It was those experiences which led him to create PBS, an experiential outlet that not only provides entertainment but a food and beverage experience that’s truly top-notch.

"Punch Bowl Social was really an aha moment for me," he says. "There was a giant void in the marketplace, and I couldn’t believe that no one was capitalizing on it. What we do is eclectic. It’s a little old school, and we really put an emphasis on the quality of the food that’s made in our scratch kitchens." 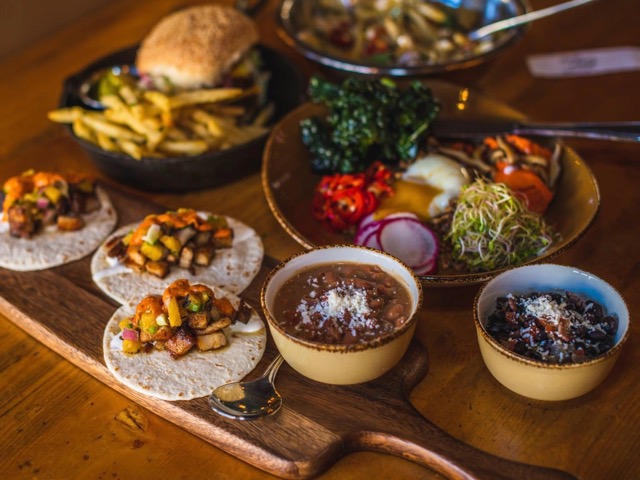 And when Thompson says "scratch," he's not spouting a line; he means food prepared onsite from fresh ingredients.

"There are plenty of dining concepts that abandoned the idea of scratch fare," he says. "We not only haven’t done that, we have doubled down on it."

That included starting off with a menu created by James Beard award-winning chef Hugh Acheson and, more recently, hiring Chef Sheamus Feely, founding chef of the much lauded farm-to-table Farmstead Restaurant in Napa Valley and former Senior Vice President of Culinary and Kitchen Innovation for BJ’s Restaurants’ 200-some locations.

"When we started, we chose primarily a diner approach to the universe, which really gives us a lot of freedom to do modern twists on American staples and comfort foods," Thompson says. "And that may manifest in a pastrami meatball sub or one of our iconic malted waffles with fried chicken and chipotle-citrus maple syrup. Along the way, we really utilized our freedom ... decided that there might not be anything more American than a taco."

All of those things are likely candidates to appear on the Milwaukee menu, along with shareables like a "Sheetload of Nachos," wings, a bevy of burgers, salads, and a menu of tacos ranging from green chorizo and barbacoa to shrimp and pork belly.

"We focus on consistency," says Thompson. "It’s tough enough to operate a truly scratch kitchen, and so we really focus our efforts on producing a high quality experience." 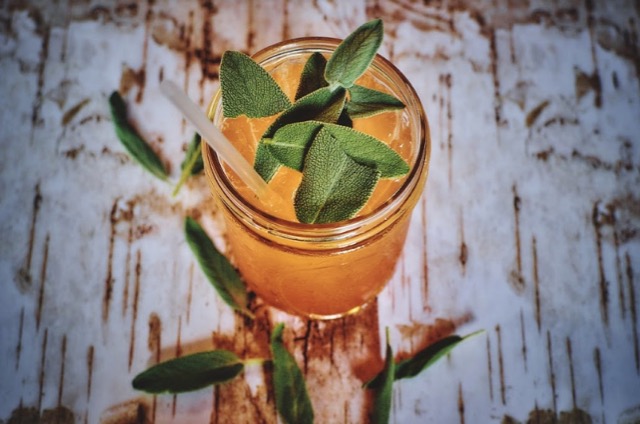 That applies to the brand’s craft cocktail program, headed up by beverage director Patrick Williams, which will include a variety of locally brewed beers and integrate spirits from local distilleries into a wide range of craft cocktails and punches.

The brand is also well known for its mocktail program, which includes selections like the cilantro fizz featuring fresh cilantro, housemade jalapeno and cucumber syrup, fresh lime and aquafaba (pictured below). There will also be coffees, teas and tea-based beverages, and old school soda fountain drinks, including shakes and malts. 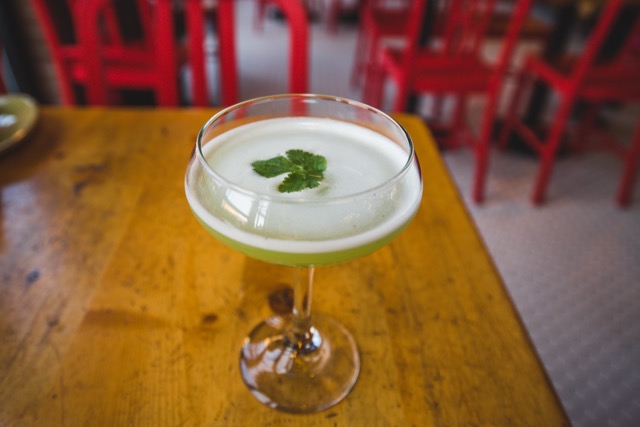 "There’s a lot of care and a real old school approach to the cocktails," says Thompson. "And it pays off."

Despite its massive size, Thompson says, "There’s nothing imposing about being at Punch Bowl Social. It’s comfortable, and we really emphasize the social aspect. In Milwaukee, our goal was to make 24,000 square feet warm and intimate, so we compartmentalized things. It’s built so that our customers can be explorers, find new things around every corner, every wall."

Thompson says the Milwaukee location for PBS will incorporate a design-forward, eclectic space melding key PBS design elements: mountain lodge, Victorian, mid-mod and industrial themes with unique Milwaukee elements. Among its assets will be a custom-built 360-degree bar, outdoor patio spaces on both the first and second floors, and various lounges and gathering spots ideal for groups large and small.

The Milwaukee venue will also have a variety of details that set it apart from the other 15 locations around the country.

"We were really struck by lake culture in Milwaukee," says Thompson. "So we really went down that road. We also offer nods to both beer culture and Milwaukee’s German heritage." 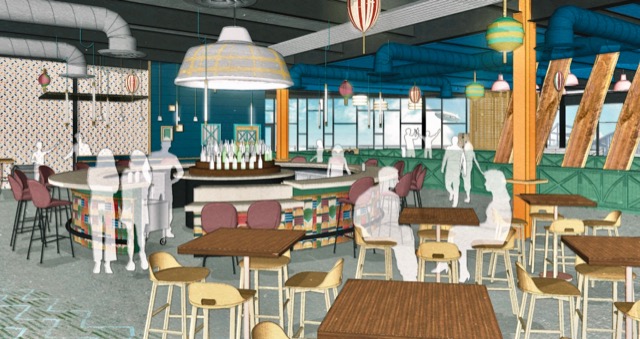 Lake culture themes will play out in little details like mounted custom-made paddles, 1950s swimmers wallpaper, and fish hooks as coat and purse hangers. There will also be hops-inspired fixtures, a modern interpretation of Bavarian chairs and walls displaying the vertical, diagonal and horizontal patterns found in traditional German fachwerk.

As a nod to Milwaukee’s longtime reputation as "the bowling capital of the world," one of the interior walls and a canopy have also been created with wooden flooring repurposed from an abandoned bowling alley in Denver.

Meanwhile, Thompson says they’ve also pulled local elements into the three private karaoke rooms: one of which will pay homage to Liberace and his fabulously flamboyant taste in fashion, another which will be dedicated to Wisconsin cheese and one more that Thompson says he’s pretty excited to reveal.

And yes, there will be games: everything from '80s arcade games to bowling, ping pong, karaoke, bocce ball, darts, bags, giant Jenga and what PBS calls "wall scrabble."

Put down your digital friends

Thompson says that, maybe above all, Punch Bowl Social is about creating an environment where guests can have authentic social experiences.

"This is really about blending a high quality culinary experience with entertainment," says Thompson. "One of our taglines is ‘less media, more social.' And that means put down your synthetic digital friends and come into our real structure with your real friends and have a real experience … and if you can’t do it over quality food, then who cares?"