Investigating the ghosts of the legendary Stanley Hotel

Before Jack Nicholson ever portrayed Stephen King's protagonist in "The Shining," before the words "Heeeeeeeere's Johnny!" were ever muttered onscreen, and before images and dialogue from Stanley Kubrick's 1980 film adaptation ever took root into the annals of film history, there was a seed planted at the Stanley Hotel in majestic Estes Park, Colo.

ESTES PARK, COLO. – All work and no play makes Jack a dull boy. That’s the line Jack Torrance writes over and over and over again in Stephen King’s 1977 horror classic "The Shining" before he loses his mind and succumbs to murderous thoughts against his family.

But before Jack Nicholson ever portrayed King’s protagonist, before the words "Heeeeeeeere’s Johnny!" were ever muttered onscreen, and before images and dialogue from Stanley Kubrick’s 1980 film adaptation ever took root into the annals of film history, there was a seed planted at the Stanley Hotel in majestic Estes Park, Colo. 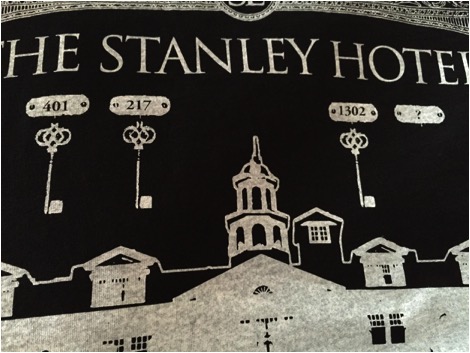 The story goes that while vacationing in the Boulder area in 1974, King and his wife opted to spend a night at the Stanley as its staff prepared to close the hotel down for the impending winter season. Though claims of the paranormal surrounded the hotel, King claims it was actually the dreams he had while staying there – fire hoses coming to life and chasing his son down the hotel’s hallways and the like – and the eerie experience of being the hotel’s only guests that truly deserve the credit for inspiring the story.

Recently, my sister and I attended a Strange Escapes event entitled "Ghosts of the Stanley Hotel," which was hosted by "Ghost Hunters" alumnus Amy Bruni. Since leaving the show, Bruni has coupled her event coordination and ghost hunting backgrounds to provide investigation opportunities at some of the most haunted locations across the country, complete with lectures from experts in the paranormal field, television personalities and authors. 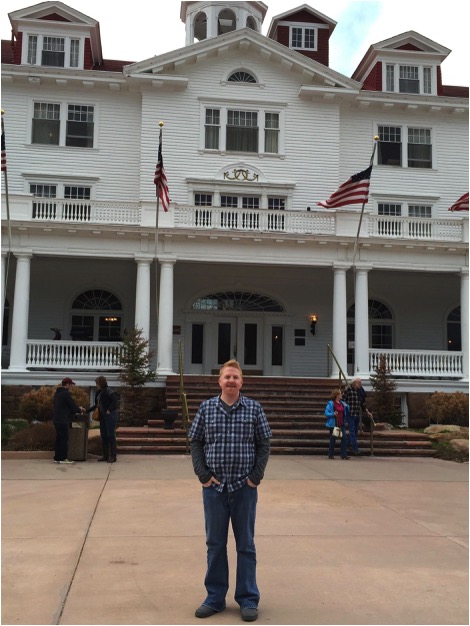 Very entertaining in sum, the highlight of the weekend for me was the investigation itself. Split into two groups on Saturday and Sunday nights, my sister and I were slated for the latter. We’d be investigating multiple locations scattered throughout the hotel grounds for about 45 minutes each. We were raring to go when it was our turn. We would start out on the fourth floor where the claims stated the spirits of children could be heard laughing and playing in the halls.

Our night started in Room 401. I have to admit: I was a bit nervous. I had never been on an investigation of this scale before, I was staying in the room next door, and I had seen the 2006 "Ghost Hunters" episode where Jason Hawes (current "Ghost Hunters" cast member and T.A.P.S. co-founder) had spent the night in this exact room and had a closet door open and shut on camera and a drinking glass shatter on his bedside table while he slept in the room.

Now my sister and I were here, in person, hoping for our own first-hand experiences. The backstory claimed that the spirit of a man named Lord Dunraven inhabited the room, an early owner of most of the land in Estes Park (which he used for his own personal wildlife preserve and hunting grounds). He had a particular fondness for the ladies both in life and after his death, and had made his presence known to hotel guests over the years since his passing.

It didn’t take long for things to start happening.

Sitting patiently, my sister began to feel what she would later describe as "waves of rolling chills" that extended from her feet all the way up to her head, as well as the sensation that all of her hair was standing up on her head. Simultaneously, a fellow investigator’s K-II meter (which measures electromagnetic frequency, or EMF) began to light up, denoting a change in the room’s electromagnetic field (often considered a potential sign of a spirit using the available energy to manifest itself). 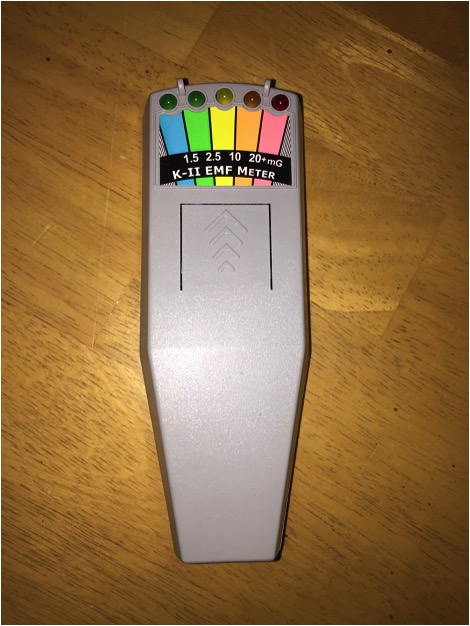 Moments later, a young man from a local T.A.P.S. affiliate entered the room from hallway and verbally acknowledged that the energy in the room felt heavy. We repeatedly asked Dunraven to give us a sign of his presence, and even though no doors opened and closed or glasses shattered, my sister’s experience in the room was pretty cool. Paranormal or not, we were jacked, and the night was only beginning!

Down the hall in Room 418, my sister and I had our first encounter with an Ovilus, or "ghost box" or "spirit box." Considered by some to be the digital equivalent of a Ouija board, the Ovilus "converts environmental readings into real words," which therefore allows "an intelligent entity to alter the environment in such a way that forces the Ovilus to ‘speak’ a response appropriately," according to the GhostStop website.

At one point, the Ovilus said "Dawn" (my sister’s name) as well as "dime," which was a word/image that a fellow investigator had agreed to use as a trigger word to communicate with her recently deceased mother.

Soon we were out of the main hotel and into the balcony of the property’s Music Hall. Once our group got settled in, we heard shuffling sounds from the stage and main floor. At one point, a mini Maglite flashlight, which was set up to turn on and off with an-ever-so-slight twist of its lamp head, turned on without assistance. This technique has been utilized on numerous episodes of "Ghost Hunters," yet continues to draw scrutiny from naysayers. Was a spirit in fact making contact, or was the battery simply completing the circuit and turning on the flashlight’s beam? Who knows? I’m still not sure. But I’ve certainly never experienced a flashlight turning on by itself like that before. I chalked it up as another new experience in a weekend of new experiences.

But what happened next had to be the climax of our weekend at the Stanley Hotel. As our group shifted down to the basement of the Music Hall, my sister and I decided to separate from the larger group to check out an interior room with a door that a spirit named Lucy liked to close, and had already closed, several times so far that evening – even with a heavy, upholstered chair propped in front of it.

Dawn and I sat down with a handful of other investigators in the pitch-black room and began introducing ourselves to Lucy, asking her politely to shut the door if she was present. It wasn’t long before she obliged. I was literally about four feet away from the doorway when, sure enough, the door began move away from the wall and toward the jamb, closing the door almost completely. Elated, we thanked Lucy for her efforts. Then we asked her to do it again, and after hearing rustling noises behind me and to my left, it happened again a second time.

Upping the ante, we put a chair in front of the door to see if we could get it to happen with the chair blocking the door’s path, to no avail. A few minutes later, the group decided to try to get the door to close again without the chair to block its path, like it had two times prior. Moving the chair myself, I pushed the door tightly against the wall to ensure the door wasn’t leaning forward, building momentum and closing due to some mechanical issue such as a faulty hinge. But I couldn’t make it start a closing motion without a deliberate effort. Clearly something had to be shutting this door, right?

We asked Lucy a third time to please shut the door, and almost as if on command, the door began to shut again. About halfway between the completed motion, I yelled, "Slam it!" and that’s exactly what happened. We experienced the door shutting a total of five times (a fourth time after asking Lucy to give us a sign she wanted us to leave, and the final time when the door closed behind us as we were leaving the room). 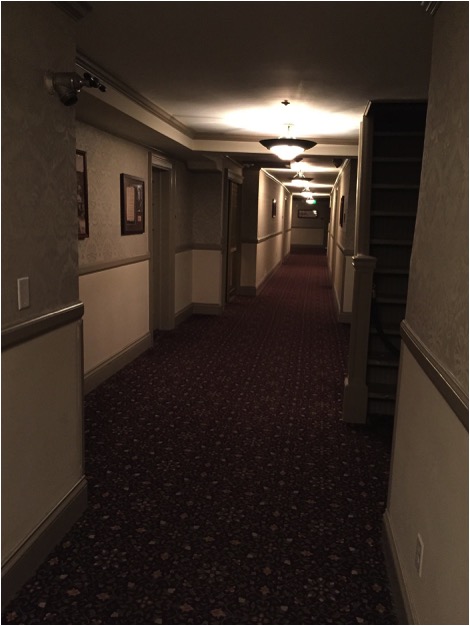 Next, Dawn and I used a Ouija board for the first time, using a combination of the planchette and an iPhone app called the "Spirit Story Box" (similar to the Ovilus) to contact a spirit named Gus who allegedly worked as a waiter at the Stanley Hotel – and perhaps even met his fate there.

Purportedly haunted by an extremely tidy chambermaid, the host investigators purposely littered random items across the bathroom floor in hopes that Mrs. Wilson would tidy up during our time there. Interestingly, my sister heard something in the bathroom almost immediately upon turning the lights out. It turns out that a photo taken before the lights were turned out would show the items had indeed moved from their original locations. Coincidence? Could very well be. But hard to argue at the same time.

As 1 a.m. came and the night’s investigation ended, the activity continued, even into the next morning. Up at 6 a.m. to pack up, check out and make the drive back to the airport, I heard the distinct sound of female laughter. I immediately thought, who would be up at this hour, especially after a long night of investigating? Then something told me to check the closet, the bathroom closet. I really didn’t want to look, but I did anyway.

My heart skipped a beat when I saw a plastic access panel to the crawl space behind the closet removed, now laying precariously in front of the opening. A quick glance into the space revealed the customary plumbing and electrical works, but why the laughter? Was it children playing in the hall? Was it coming through the way from Room 401? What exactly caused the panel to become dislodged from the screw that was holding it in place anyway? The questions raced and the answers eluded. It really was anyone’s guess, and considering where I was and the weekend I had just experienced, I wouldn’t have wanted it any other way. 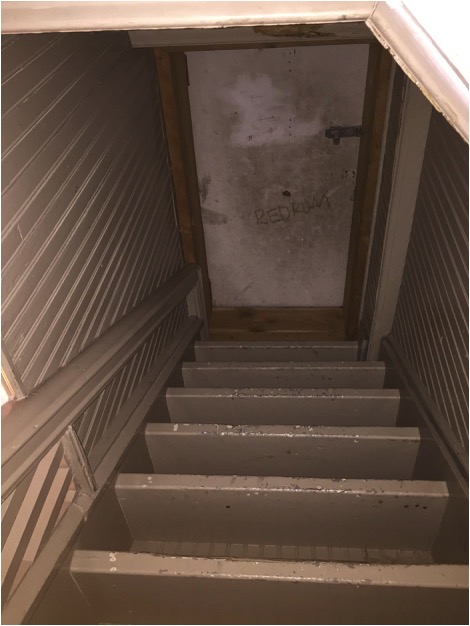