Sculpture MKE work, "Pensive," will remain in the city thanks to Irgens

Around Dec. 15, another work first displayed at part of Sculpture Milwaukee will become a permanent fixture in the new plaza in front of the new BMO Tower on the corner of Water and Wells Street, thanks to a gift from Sue and Mark Irgens.

As if the annual plein air exhibition of great artwork along Wisconsin Avenue wasn’t already enough, Sculpture Milwaukee has continued to elevate the city thanks to gifts that have kept some of the displayed works in Brew City after the season has ended.

Come spring, another sculpture will become a permanent fixture here.

Thanks to Sue and Mark Irgens, "Pensive," a 2013 work in bronze and wood by Atlanta-based artist Radcliffe Bailey, will be installed in front of the new BMO Tower, 790 N. Water St., developed by Milwaukee-based Irgens. 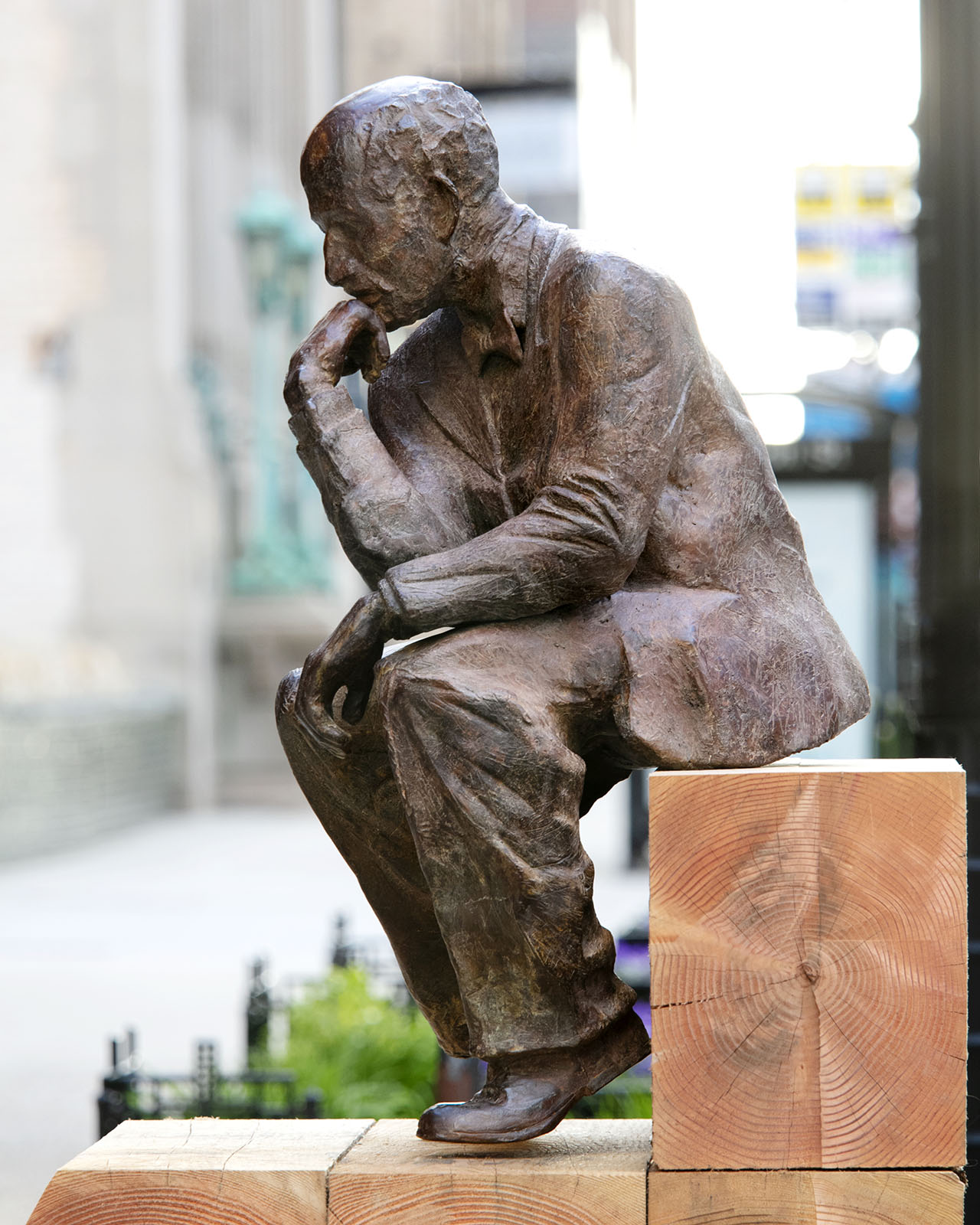 The work, previously went on view in front of the Milwaukee Club, 500 E. Wisconsin Ave., in May as part of Sculpture Milwaukee’s 2019 lineup.

Earlier this year, the late Robert Indiana’s iconic "The American LOVE (1966-69)" – which arrived here in spring 2018 – was purchased and given by an anonymous donor and the Greater Milwaukee Foundation to the Milwaukee Art Museum, which installed it near the lakeside entrance in September.

"At Irgens, we prioritize public art with our projects," said Irgens CEO Mark Irgens. "Public art benefits the community at large, attracts talent and is a valuable amenity that sets apart our building and city.

"We couldn’t be more proud to not only add aesthetic beauty to our cityscape, but to also tell the story of '​Pensive'​ amidst the vibrancy and diversity of downtown Milwaukee. Our city center, like ​'Pensive​,' is a pastiche – a true celebration of the style and character of the many artists and personalities who came before us." 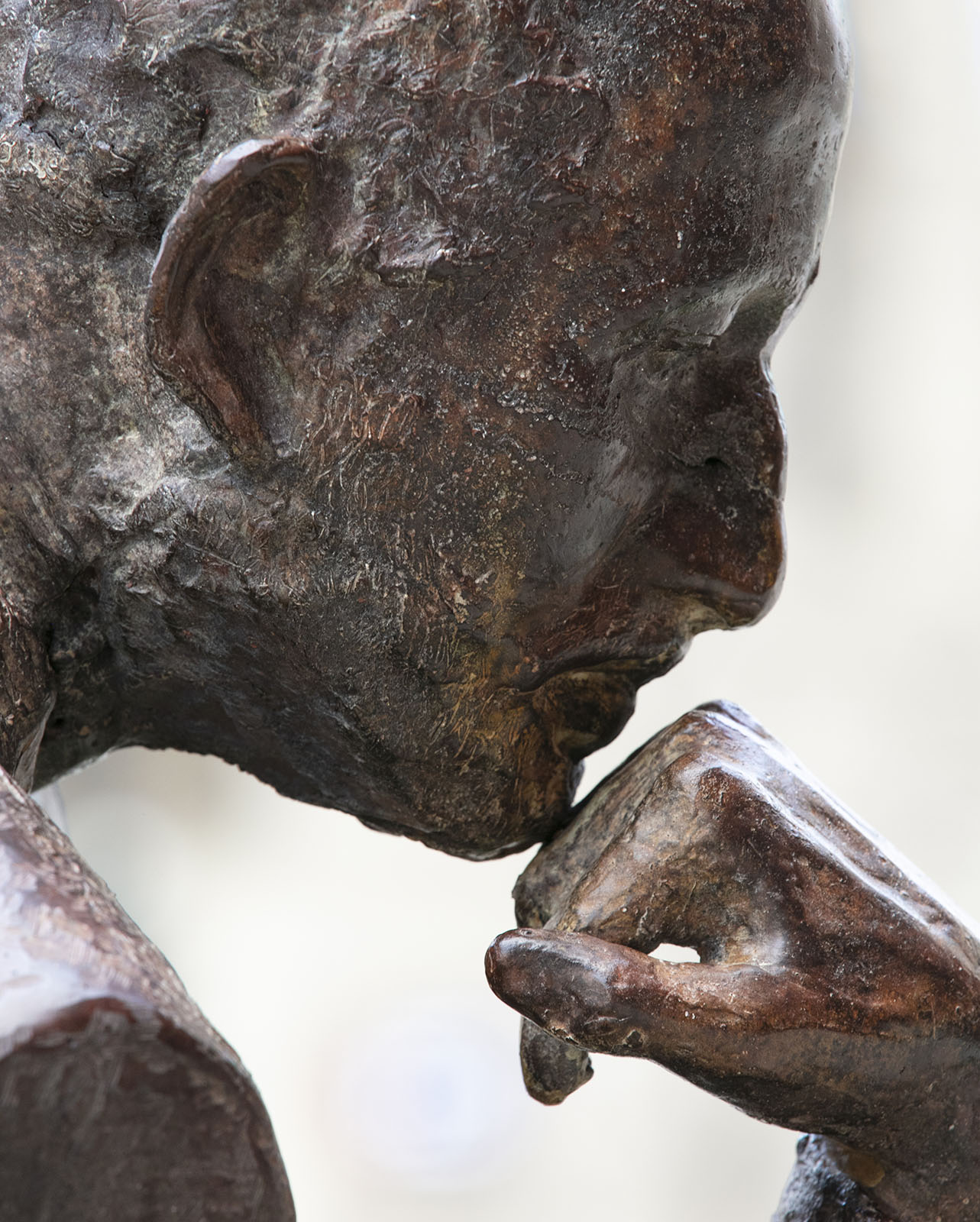 The statue – which harks back to Auguste Rodin’s classic "The Thinker," a casting of which (there are 28!) lives in the garden at the Rodin Museum in Paris – depicts landmark African-American writer, historian, journalist/editor, activist and sociologist W.E.B. DuBois.

"In Rodin's version, The Thinker is 14th century Italian poet Dante Alighieri, author of The Divine Comedy, completed in 1320," notes the Sculpture Milwaukee website. "Dante sits in his well-known position, contemplating the circles of hell as described in Christian theology. In his epic poem, Alighieri wrote about his own life and exile, mirroring perhaps DuBois' own alienation. Both DuBois and Alighieri are depicted as deeply philosophical men, pondering the harsh realities of human behavior although separated by centuries of time.

"Bailey's work is ‘... is a meditation on "double consciousness,’ a term coined in the section titled ‘Of Our Spiritual Strivings’ in Du Bois' seminal work, ‘The Souls of Black Folk,’ published 1903. [DuBois) describes a second sense of self that is seen through the eyes of others."

Born in New Jersey in 1968, Bailey lives and works in Atlanta, where he received his BFA from the Atlanta College of Art in 1991. His work has been collected by world-class institutions like the New York’s Metropolitan Museum of Art, the Smithsonian Museum of American Art, in Washington, D.C., the Art Institute of Chicago and others.

"We are thrilled that ​Pensive​ will reside in the heart of the city, less than a mile from the Fiserv Forum, the Third Ward, Milwaukee Art Museum, the arts district and Westown," said Steve Marcus, board chair and founder of Sculpture Milwaukee and chairman of the Marcus Corporation.

"Like several other sculptures from our exhibition that were purchased and installed at prominent sites in the city, including Robert Indiana’s 'American Love' a​t the Milwaukee Art Museum and Tony Cragg’s ​'Mixed Feelings' ​at Milwaukee City Hall​, 'Pensive​' will serve as part of Sculpture Milwaukee’s legacy. We are grateful to Susan and Mark Irgens for this beautiful gift."

Before it is installed in Milwaukee next spring, "Pensive" has traveled to Chicago so that a new base can be added.

Sculpture Milwaukee will expand to embrace the Third Ward in 2020