After four years away, Iron & Wine returns to The Pabst

With the release of the "Weed Garden" EP, which includes songs that were part of the writing sessions that led to last year's "Beast Epic" masterpiece, Iron and Wine has put Brew City back on the itinerary.

When Iron & Wine returned to The Pabst on Thursday night, it had been four years since Sam Beam (who is both Iron AND Wine) last rode into Milwaukee – for a 2014 performance at the same venue. In that time, Beam released what to these ears is his most accomplished, most sublime record.

Last year's Grammy-nominated "Beast Epic," released on Sub Pop, though it wasn't his highest charting record in the U.S. (that distinction goes to 2011's "Kiss Each Other Clean," which reached No. 2 on Billboard's Top 200 albums chart), was engaging from start to finish, ethereally melodic but tinged with darkness.

At times, Beam edged close to Nick Drake territory ("The Truest Stars We Know"), at others flirted with almost pure pop music – albeit dressed in folkier clothes ("Call It Dreaming"). Sometimes he created what could be the soundtrack to a Southern Gothic film ("Thomas County Law") but also dished up breezy melodies that enrobed melancholic lyrics ("Summer Clouds").

The result was the kind of record I just may have listened to on repeat for months on end ... OK, that's exactly what I did before heading to Chicago last October to see Beam perform these songs at Pilsen's Thalia Hall. 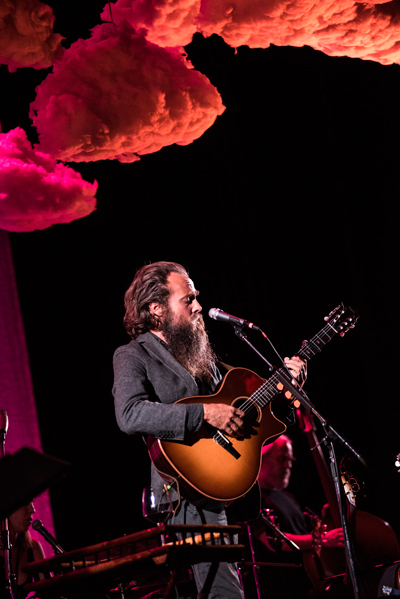 With the release of the related "Weed Garden" EP, which includes songs that, according to Sub Pop, were part of the writing sessions that led to "Beast Epic" – plus the previously unreleased concert crowd pleaser, "Waves of Galveston" – Iron and Wine has put Brew City back on the itinerary.

Beam seemed as happy to be back as Milwaukee was to have him. More than once (more than twice), he said how much he loves Milwaukee, and at the ending of the night added, "Milwaukee, you are the sh*t."

Surely, he doesn't say that to all the towns.

As has become tradition, the crowd was vocal, hooting and hollering and drawing Beam's humor and commentary. Despite the mostly mellow – if also at times simmering near to boiling – show, Beam was chatty and witty and clearly having fun. At least twice he burst into laughter during songs, like an "SNL" performer who can hold it back no longer.

Also more than once (and more than twice), Beam and his fine band – which includes especially inventive drummer Elizabeth Goodfellow, who has used her unique touch to reinvent some of Iron & Wine's material – waxed witty in song, leading to bursts of playful laughter from the crowd.

The first, but not last, example came early in the night during a quirky free-jazz-meets-Friz-Freleng-cartoon-soundtrack arrangement of "Last Night."

Later, after "Rabbit Will Run," during which the band came back out after having left Beam space for a short acoustic set, the singer quipped, and I paraphrase, "that song is insane. So many words. I don't know what I was thinking. Seemed like a good idea at the time." 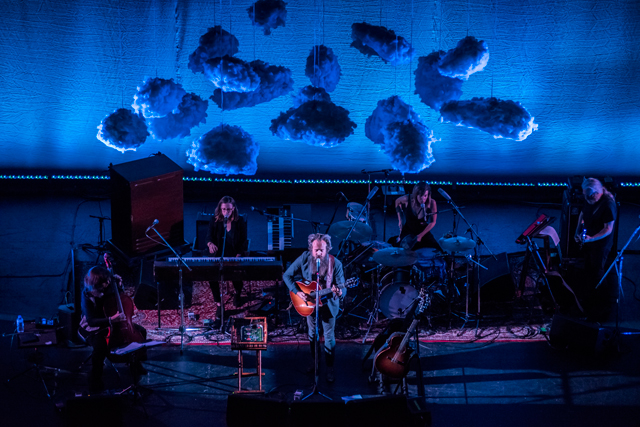 But it wasn't all fun and games beneath that deceptively simple but evocative and adaptably expressive stage set of dangling clouds. Some of it was intimate and fun, entrancing and fun, tender and fun. (And I realized for the first time just how many Iron & Wine songs reference birds.)

Some other standouts included the most roiling version I've heard of the extended glory that is "The Trapeze Swinger," a sweet reading of "Waves of Galveston," from the new EP, and a slow, aching version of "Claim Your Ghost" that, as it neared its conclusion, flirted with sonic chaos.

A consummate showman, Beam, with a set as heavily low-key as Iron and Wine's, is wise to keep things light and personable. It adds chiaro to the musical scuro and makes for one hell of a night.

I'm hoping we can make an Iron & Wine gig an October tradition.

Nashville-based Erin Rae opened the show with an earthy, melodic and intimate set. 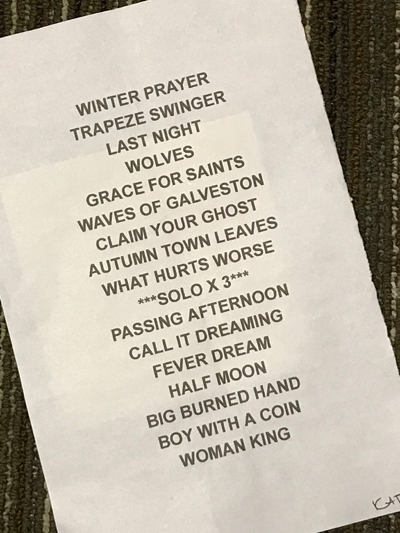 (NOTE: The three songs in the acoustic set were "Song in Stone," "Naked As We Came" and "Rabbit Will Run.")