We paid a visit to the new Iron Grate BBQ Co. and it was grate

In late June, we reported that Iron Grate BBQ Co would be moving into its own digs. Well, beginning yesterday at 11 a.m., the doors of the restaurant were officially open at 4125 S. Howell Ave. And, even on its inaugural day, business was steady.

In late June, we reported that Iron Grate BBQ Co would be moving into its own digs. Well, beginning yesterday at 11 a.m., the doors of the restaurant were officially open at 4125 S. Howell Ave.

And, even on its inaugural day, business was steady. Owner and chef Aaron Patin says he estimates Iron Grate did nearly 200 covers over the lunch hour, before settling into a pleasant afternoon lull. 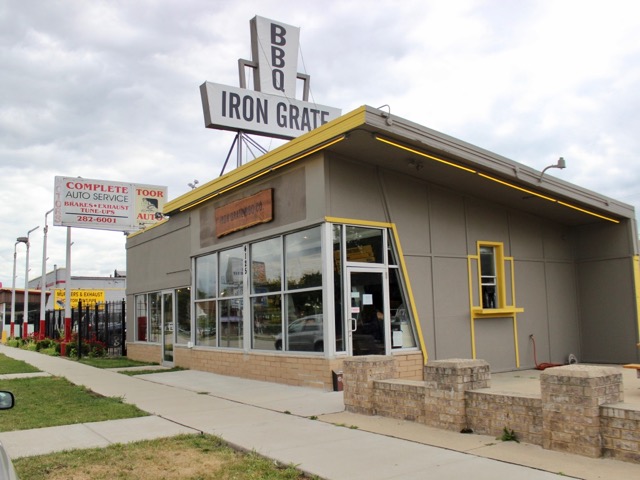 That's great news for the barbecue restaurant, which had been serving its menu of smoked meats and sides since January of 2016 at Hawthorne Coffee, 4177 S. Howell Ave.

After all, the new location opens up all sorts of possibilities for the popular barbecue business.

"It’s kind of surreal to realize that, at this point, there are no rules," notes Patin. "We’re setting our own pace, our own schedule. And there are infinite opportunities for the business now. The real challenge is that we need to push ourselves, set the bar and really make our mark."

Patin has big plans for the new location, including new offerings like spit-roasted meats prepared on asado crosses and hosting special events and collaborations, like a new Grate to Plate dinner series focusing on internationally inspired barbecue.

"Our goal in wanting to be called ‘the best’ is to be able to do things that people don’t do," he says. "And that’s everything from the asado to feeding hundreds of people efficiently with our catering operations. It’s a big job, but it’s also a great opportunity."

The new restaurant is small, but efficient. An ordering counter offers customers a view into the kitchen, where meats and sides are being prepared after smoking. 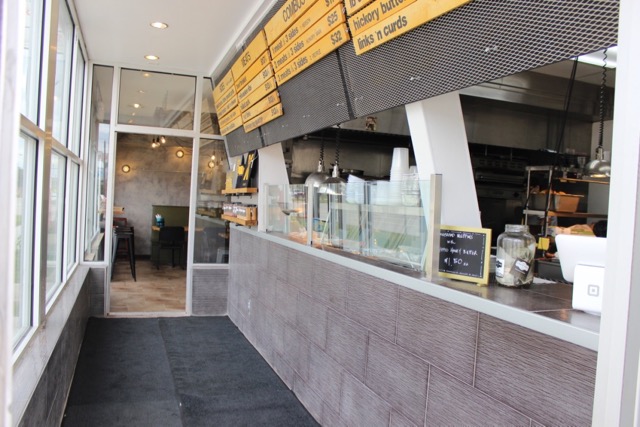 Menu items are visible on wooden boards mounted on a metal grate above the counter. There's also shelving, which displays Iron Grate tees, as well as barbecue sauce and rubs for sale. 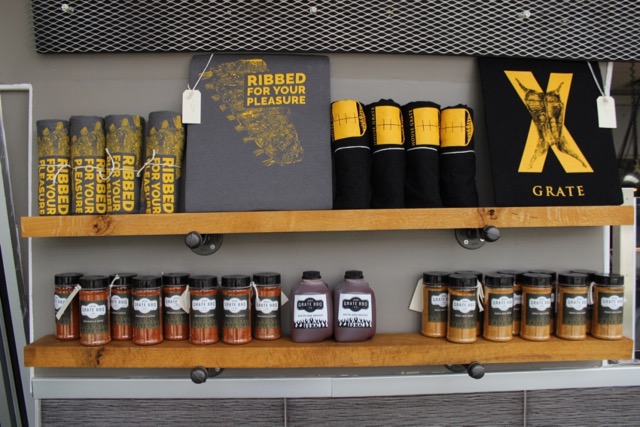 Once ordered, customers have the option of eating their food in the restaurant’s dining area, which seats about 30 at both high and low-top wooden tables. Decor features earth-toned walls and curtains along with exposed light bulbs mounted from industrial conduit and the walls and hanging free-form from a dropped grate ceiling. 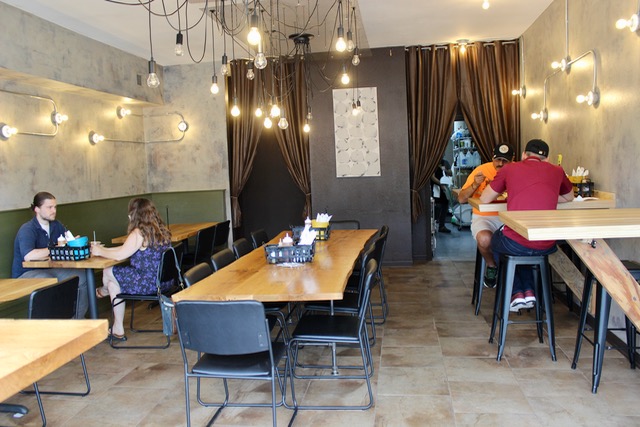 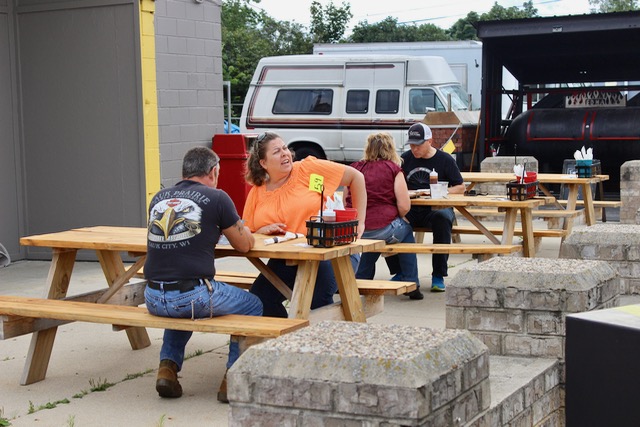 Sides ($5 per pint or $9 per quart) include smoked tomato macaroni and cheese, stone ground grits, creamy coleslaw, baked beans, smothered greens and corn bread muffins. Additional seasonal sides are likely to be added in the fall. 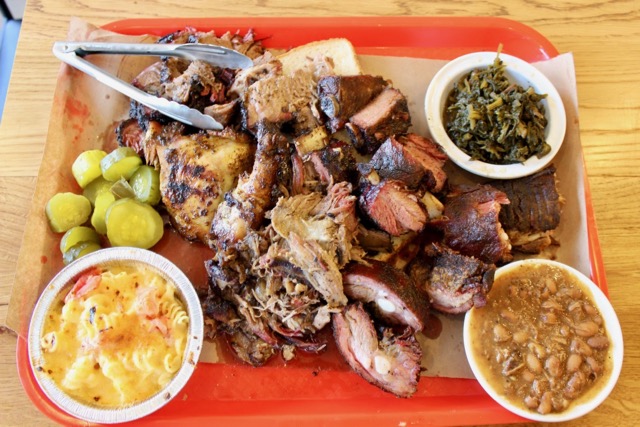 Pictured is the three meat and three sides combo with brisket, pulled pork and chicken quarters, greens, macaroni and cheese, and beans. It’s augmented with one pound of riblets (made from spare ribs).

Those riblets are $13 a pound and are just one of the new items on the appetizer menu, which also includes the increasingly popular hickory butter barbequed shrimp ($18/pound), which Patin introduced during the Lenten season to rave reviews.

Hush puppies ($7) are ultra crisp with a tender interior. Their flavor is a bit sweet, making them reminiscent of a cornbread doughnut. 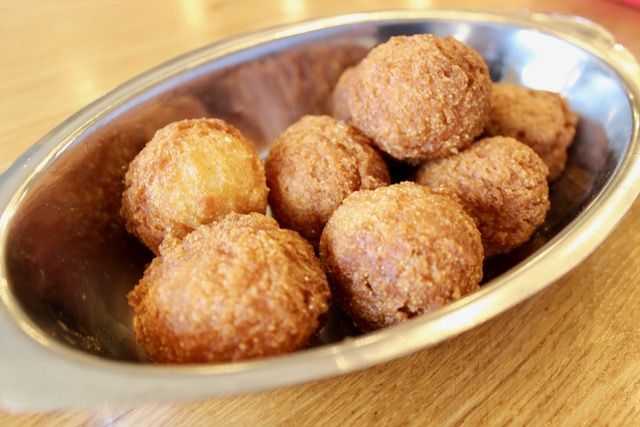 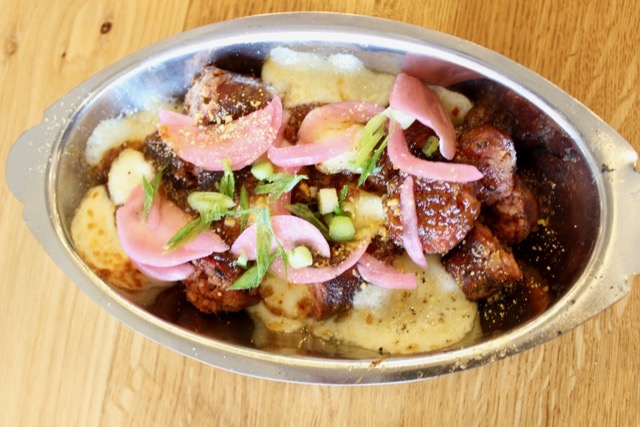 In the drinks department, Iron Grate currently offers housemade fruit punches and flavored iced tea. However, in the weeks ahead, once it receives approval for its liquor license, there will also be beer and a moderate selection of spirits, which will allow for spiked punch and agua frescas, along with alcoholic slushies. 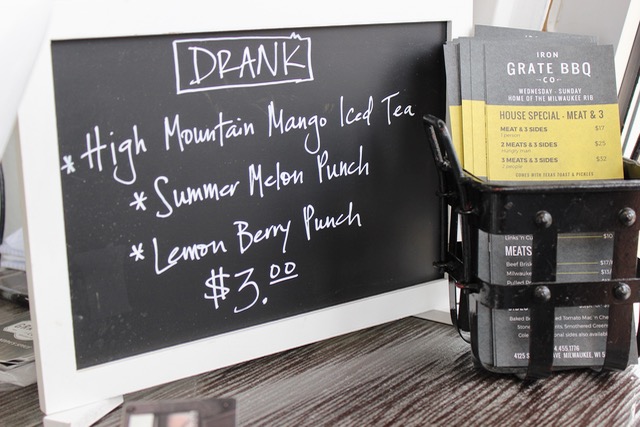 Iron Grate is open Wednesday through Sunday from 11 a.m. to 8 p.m. Hours may see an extension in the next month or so, once the restaurant’s liquor license is secured.