After 25 days, how we found our missing cat

I really didn't have any hope left after 25 days. As we entered the fourth week without our sweet, kind, missing cat, Jabie, I was beginning to come to peace with the reality that I'd never see her again. Then, yesterday, less than four blocks from home, a woman called my wife and said she had cajoled a black cat into her basement. My wife bolted home from work and immediately recognized Jabie coming up the stairs. Just to be sure, she took her to the closest vet to scan her microchip. And it came back as a match from Elmbrook Humane Society.

I really didn’t have any hope left after 25 days. As we entered the fourth week without our sweet, kind, missing cat, Jabie, I was beginning to come to peace with the reality that I’d never see her again.

Then, yesterday, less than four blocks from home, a woman called my wife and said she had cajoled a black cat into her basement. My wife bolted home from work and immediately recognized Jabie coming up the stairs. Just to be sure, she took her to the closest vet to scan her microchip. And it came back as a match from Elmbrook Humane Society.

Skinny and scruffy, but otherwise not visibly worse for the wear, Jabie is home now.

I still can’t believe it. If you’ve spent any time on Facebook or Twitter, or anywhere in the 53207 ZIP code, really, you may already know this story. Jabie, our 11-year-old rescue cat quietly escaped from our home around Oct. 2. We assume our young daughter (or maybe one of us) left the patio door open a crack. As soon as we discovered she was gone, we immediately sprung into action. She'd never left the house before since before we adopted her as a 4-month-old kitten.

The first week, our family wandered the neighborhood, putting up posters and following any and all false leads. In addition to wandering miles each day, we took to social media, posting on both our personal pages, but also through the incredibly supportive "Bay View Lost/Found Pets" page. We exhausted our resources through both the Wisconsin Humane Society and MADACC. When we thought that everyone we knew had seen our many posts, we used OnMilwaukee.com’s Facebook presence to boost the post to tens of thousands of users on top of our existing 30,000 Facebook friends.

The next week we continued sharing and walking. I blogged about Jabie. I dove through bushes and alleys meeting all the feral and "outside cats" in my neighborhood – and there are many. I met new neighbors. I made new friends on Facebook who sent good thoughts and kept their eyes and ears open. People I have never even met searched with passion, like Jabie was their own missing cat. There are too many of you to name and thank individually for that, but we are extremely appreciative of all of your efforts.

We even contacted two animal communicators. One said that Jabie had been taken in by a large man in a dirty house, and was feeding her eggs and milk – that made my wife cry. The other said Jabie was close, by water and a blue house, afraid of the other cats, not eating or drinking. Neither of us really believe in this stuff, but we were getting desperate.

In week three, I printed 1,000 color and bright green posters and recruited friends, family and more social media volunteers to go door-to-door handing out flyers. We extended the search in at least four blocks in each direction, with more attention being focused north and west where the majority of the false leads had sent us. The campaign let to more sightings of cats that looked somewhat like Jabie. We followed every tip but it was wearing us down.

I’m sure some people, too, started to get tired of our persistence. One stranger wrote on Facebook that we should stay out of her yard and leave her "outside cat" alone. My family certainly felt deflated at this point, but we still printed another 500 quarter-sheet flyers and gave them out to all the trick-or-treaters that came to our house on Saturday. 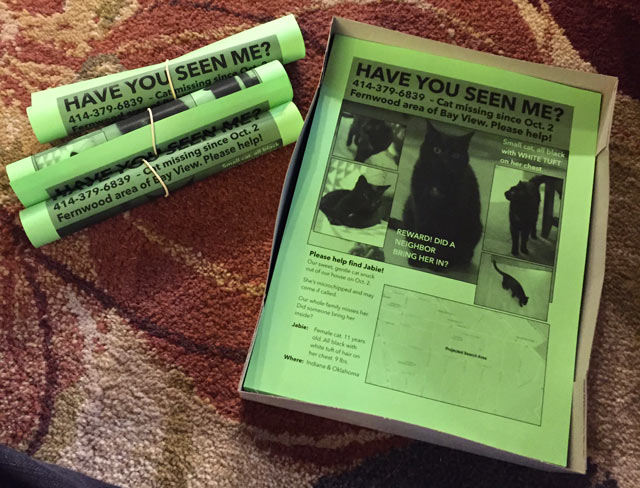 Then, Sunday, we got a call that a cat matching Jabie’s description had been spotted in an alley three blocks east. This was different, because every other call had come from west or northwest. We circled the alley by car and by foot, and two other neighbors said they had seen her. We even thought we heard a meow, but we saw nothing.

Then Monday, the real call came. A woman called my wife and said that after four days of getting close to her, she lured Jabie into her house. And now she’s home, very skinny and hungry. We had her groomed (thank you, Embark, for offering half off) and thoroughly checked out at the vet today; her time away was clearly rough. Jabie is down from 9 pounds to 6. She has a broken rib and lost a tooth. She is scratched, bitten and bruised. We will need to get her another blood test in a month, but for now she will be treated with antibiotics, painkillers, rest and love. I won't editorialize here about how I feel about the concept of "outside cats," but you can probably just guess.

For all our flyers and alley walking, the home she ended up at is only six houses away where I halted my ever-expanding search radius. On Superior, it was actually close to water, but nothing else from the psychics matched. The woman at the house had heard about the search from another concerned neighbor – I don’t think she saw my posters or social media mentions, but it all added up to a consistent communications campaign. When my wife offered her a reward, the husband said, "Our only reward is seeing you reunited with your cat."

I can be a pretty skeptical person, but this search helped restore my faith in humanity. From the dozens of people that I don’t even know who helped in any way they could, to the old friends who came out of the woodwork to go door-to-door, to the hundreds of heartfelt sighs of relief since yesterday, our community stepped up and helped bring our family back together. So many people have offered to bring Jabie "welcome home" treats, too. It’s not even necessary – we couldn’t be more happy than we are right now, and she’s eating the food we’re putting out for her.

What have I learned from this experience? First, every cat needs a collar and tags. Our first cat would never tolerate one, so we didn’t even try with the docile Jabie. But she’s wearing one now. That little jingling bell is music to my ears.

Second, someone needs to invent a decent lost pet GPS system. After some searching last night, the only one that seemed appropriate for a small cat is coincidentally funding on Indiegogo right now (it actually ends tonight). I spent the $159 and hope it works when it arrives in December. Microchipping your pet is very important, but if you can’t capture it, it doesn’t do much good.

Third, after searching the MADACC website every day, as well as calling and visiting in person, I’m reminded that Milwaukee continues to have a desperate stray animal program. I saw tons of feral cats in my searching, and I only scratched the surface. My personal charities of choice are the Wisconsin Humane Society and the ASPCA, but I had never given to MADACC before, and we had planned on making a donation in Jabie’s memory. Today I can say we donated in her honor so others may be reunited, too.

Finally, I’m beyond appreciative to the family who took Jabie in. Even though I didn’t meet them, they have touched our family – that all of you have supported over the last 25 days. I’m eternally grateful to you all.

Hug your pet when you come home from work. And don’t let it go.

Adopt a senior pet for free during November