Summerfest crowds may have gotten a break from the oppressive heat on Friday, but the BMO Harris stage was a virtual fire pit thanks to Janelle Monáe, who followed up the soulful sounds of Chicago-born Milwaukee native B-Free with a powerful, empowering set that left everyone in attendance both electrified and feeling all the feels.

Summerfest crowds may have gotten a break from the oppressive heat on Friday, but the BMO Harris stage was a virtual fire pit thanks to Janelle Monáe, who followed up the soulful sounds of Chicago-born Milwaukee native B-Free with a powerful, empowering set that left everyone in attendance both electrified and feeling all the feels.

Over the past decade, Monáe has set herself apart —not only with her captivating outré and tendency to straddle a diversity of genres from doo-wop and funk to soul and hip hop—but also her ability to stand defiant against race and gender stereotypes while providing sophisticated, artful fodder for music lovers.

After living in the future on "ArchAndroid" and "Electric Lady," Monáe came back to the present this year with her newest release, "Dirty Computer," an album wrought with candidness and vulnerability. The most personal of her albums, it shines a light on both the need for acceptance and interminable hope for a time unruled by the patriarchy, where women (and humans of all stripes) are powerful, free, uninhibited and celebrated. And it was this fully realized and wildly diverse album that formed the bulk of her Summerfest set. 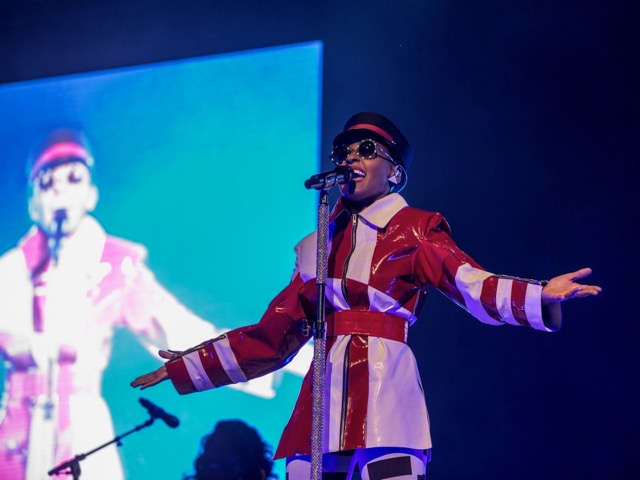 Every last inch of the venue was packed to the gills as the lights went up to reveal a smoke-covered stage from which the harmonic strains of the Brian Wilson-backed title track rose from the speakers. The crowd fell silent in anticipation as crew theatrically rolled a sheet-covered gurney onto the stage, backed by the Dirty Computer" music video.

As the gurney rolled away, a female silhouette emerged on stage and the audience just about lost it. Roars rose up as a red and white jacket clad Monáe appeared, sporting over-the-knee boots and black and white checkered pants. And as she broke into "Crazy Classic Life," her four backup dancers gathered, setting the stage for a show, the electricity of which could only be anticipated.

Take the ear-splitting rock guitar that set the stage for Q.U.E.E.N., an anthem that not only showcased Monáe’s powerful vocals, but also a perfectly choreographed twerk-filled dance fest that activated the stage with a blur of black and white. 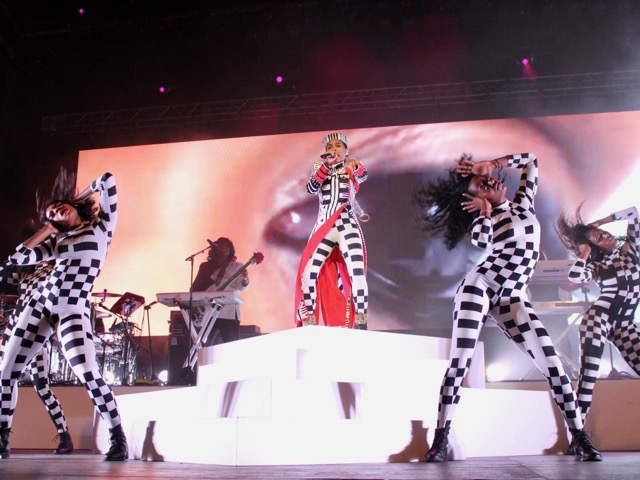 It was an irresistibly dance-worthy show – fueled by the moves of both Monae’s talented backup dancers and five-piece co-ed band – but Monáe’s show wasn’t all theater. After all, Monáe had shed her android alter-ego Cindi Mayweather, and was standing before the crowd – arms open and soul bared – unravelling the complexity of life as an outsider: black, queer and female.

And while her performances of past hits -- including the funk-filled "Electric Lady" and an emotionally charged "Cold War" – shone, it was selections from her admittedly personal "Dirty Computer" that spoke most saliently to the hungry crowd.

The emancipatory "Screwed" served to set up the irresistibly sexy mood which would persist throughout Monáe’s candid performance. Fans bowed to the queen as she rattled off the rapid-fire verses of "Django Jane," ruling the stage in hip-hop bravado atop a golden throne. And when Monáe belted the words "Let the vagina have a monologue!" it sent the crowd ablaze, their cheering broken only by a bass drop that led Monáe back to her throne for the song’s culmination. 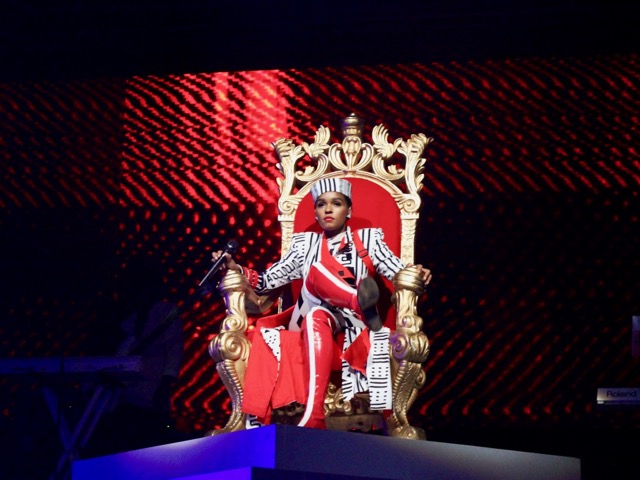 And there was plenty more "black girl magic" where that came from, along with numerous nods to Prince, a friend and frequent collaborator whose influence was apparent in both subtle and easily identified ways.

During an he innuendo-laden "Pynk," Monáe broke out her iconic vagina pants, along with a raspberry beret for a crowd pleasing "pussy riot."

"PrimeTime," a song which also borrows from The Pixies "Where is My Mind," was performed complete with the outro from "Purple Rain," accompanied by a haze of purple light and smoke.

Meanwhile, the sensual riffs in "Make Me Feel, a song rumored to have been influenced by The Artist himself, conjured moments that seemed inspired by multiple artists. A silhouette dance performed to minimalistic electronic percussion could have been a moment taken straight out of Janet Jackson’s Rhythm Nation, a socially conscious album that preceded the age of being "woke" (and which, incidentally, was released when Monáe would have been no more than three years old). She also paid blatant homage to James Brown with a snippet of the late artist’s "I Got the Feelin’". Remarkably, none of it seemed reductive; this was full blown Janelle Monáe.

Poignant moments included her first formal address to the crowd, during which she stated: "No matter who you are, or who you love, you are welcome here. And if you didn’t come with someone tonight ... I love you." And, although she’s undoubtedly repeated those lines countless times, they didn’t seem at all disingenuous. And the crowd’s response underscored that fact.

Another moment occurred as she introduced "I Like That, a song she highlights in the liner notes of her album as a response to "wack ass f—boys everywhere (from the trop-house to the White House) who make the lives of little brown girls so damn hard."

She prefaced it with the words: "This is a self love song. It’s about loving YOU.... This is about embracing the things that make you unique, even if it makes others uncomfortable." And, as she sang, you could tell by the swaying bodies – which rose and fell like a wave across the venue – that her words hit home for many.

And when she brought up a number of fans to show their own juice during "I Got the Juice," felt less like an indulgent gesture than an invitation to an on stage dance party… which is exactly what transpired, the crowd validating every move with screams of approval.

The show ended with a high powered extended version of "Tightrope" during which she belted the lines: "We're walking the tightrope. Never sure, never know how far we could fall. But it's all an adventure. That comes with a breathtaking view. Walking the tightrope"

It was a keen reminder that moving forward and effecting change often requires risk, powerful resolve and a keen sense of balance.

It was an apt ending to a show which offered us – for a scant couple of hours – an opportunity to exist, ever so briefly, in a world where the silenced had voice, the oppressed were free and the power belonged to an army of former Androids who fully embraced their beautiful, magical, imperfect humanity.