Fore! "What the heck was that? Did I just get stung by a bee?" Nope, it was Jason Day's errant tee shot. And, it pelted a Milwaukee fan right in his back.

WHAP! "What the heck was that? Did I just get stung by a bee?

We are golf nuts in my family. I've played some and I've witnessed my share of professional tournaments. Among my highlights; I've attended the Women's U.S. Open at Blackwolf Run in both 1998 and 2012 and the Men's PGA Championship at Whistling Straights in 2010 and again this past weekend.

I also have a knack for picking the winner of the championships I attend. In 1998 I told everyone within earshot that LPGA rookie Se Ri Pak would win the U.S. Open. She did and then went onto a Hall of Fame career. Last week, two days before the PGA Championship began, posted on Facebook that Jason Day, my favorite golfer, would win and I submitted my reasons why. He was a 12-1 shot by the way.

Jason Day was playing well at -1 par after five holes.  A plethora of spectators flooded the the 15th tee box so Aaron suggested we hustle down the left fairway of #15, known as "Grand Strand" to see the group's tee shots land on the 518 yard par 4 hole.

WHAP! While walking near the 310-yard mark, with my back to the golfers, I felt a sudden and sharp sting in the area of my right kidney. Immediately, I saw a golf ball drop between my feet and roll to my left down a slight embankment. "Oh My Gosh! Dad that ball has a kangaroo logo on it," said Aaron. I was stunned, but we quickly and logically assumed it was the Aussie, Jason Day's ball. We high-fived, and guarded that ball like a mother goose protecting her egg.

The Marshall arrived, I told him what happened and he asked if I was okay which I was. Several fans suggested I tell Day and his caddie what happened so I could secure a souvenir. I chose not to inform Day because I didn't want to distract him from his game knowing he had drilled me, a fan, with an errant tee shot. We did, of course, watch him as he addressed his ball in the rough where we are standing.

Fortuitously for Day and painfully for me, had his drive NOT nailed me it would have likely caromed down a steep slope to the east towards Lake Michigan onto a spectator pathway near a concession stand. A 208 yard blind shot shot from there, up a 40 foot embankment might have spelled doom for the PGA Championship hopeful - a bogey, a double bogey, perhaps worse. As it turned out, Day hit an incredible 2nd shot from the light rough to within 20 feet of the cup, then two putted to save par. 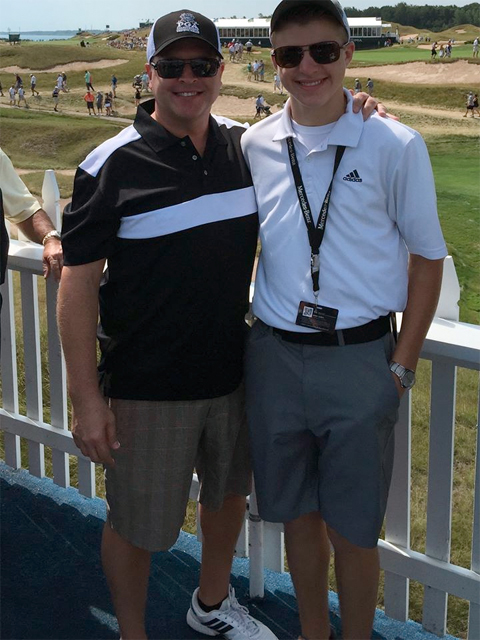 My son and I joked the rest of the weekend that if Day ended up winning by a few strokes I should attempt to claim a portion of his $1,800,000 winner's purse. Well, you know the rest of the story.

Jason Day played magically, becoming the first player to reach -20 in a Major Championship, beating the #1 player in the world Jordan Spieth by three stokes.

As the sun dove behind the gorgeous Whistling Straits landscape on that hot and humid late Sunday afternoon, Day walked the champion's path down the 18th fairway.

Aaron and I, with stretched necks and tiptoed stances watched him drain his final putt to secure his first Major Championship. I got a little misty eyed knowing I had spent an incredible weekend with my son sharing in a sport we both respect.

I also have an enjoyable tale to regale my friends and family with for years to come. How I helped Jason Day win the PGA Championship!  Would 1% of his winnings – $18,000 – be too much to ask in compensation?  The moment and memories, of course, are priceless.

Saturday Scorecard: Catching up at the Straits

Championship Sunday sure to bring thrills at PGA