The summer sun may be fading into a fall chill, but that doesn't mean the music festival season needs to stop. Case in point: The Wisconsin Center today announced its inaugural Jawbreaker Fest, a two-day EDM extravaganza hosted just before Halloween.

Labor Day weekend has sadly passed, and the summer sun may be fading into a fall chill, but that doesn't mean the music festival season ever needs to stop. Case in point: The Wisconsin Center today announced its inaugural Jawbreaker Fest, a two-day EDM extravaganza hosted just before Halloween on Oct. 27-28.

Day one of the new festival will be headlined by Zedd, who's collaborated with some of the music industry's biggest pop stars to create club-approved radio mega-hits including "Clarity," "Break Free" with Ariana Grande, "Stay" with Alessia Cara, "I Want You to Know" with Selena Gomez, "Starving" with Hailee Steinfeld and "The Middle" with country superstar Maren Morris. Along the way, he's also scored two Grammy nominations – including one win in 2014 for Best Dance Recording for "Clarity."

Joining Zedd on stage on day one will be recent Summerfest act Louis the Child, Parker, RCKT PWR and Crystal Knives.

Taking over headlining duties for day two of Jawbreaker Fest will be American EDM duo ODESZA, who's scored hits with "Bloom," "Line of Sight" and "Say My Name" featuring Zyra – which scored the pair its first Grammy nomination in 2016 for Best Remixed Recording, Non-Classical. The duo then landed two more nominations this year for Best Dance Recording for "Line of Sight" as well as Best Dance/Electronic Album for "A Moment Apart."

ODESZA will be joined on Oct. 28 by RL GRIME, SLUMBERJACK, Plaid Hawaii and Moses.

Both nights begin at 7 p.m. and will require photo ID as well as tickets, of course. Advanced two-day passes range from $80 to $115, while single day passes cost between $45 and $60. There are also VIP passes available for $150, featuring a private bar, restrooms and dancing platform.

For more information on tickets or the show, visit the Wisconsin Center's website. And for an event poster with a creepy clown on it, look below. 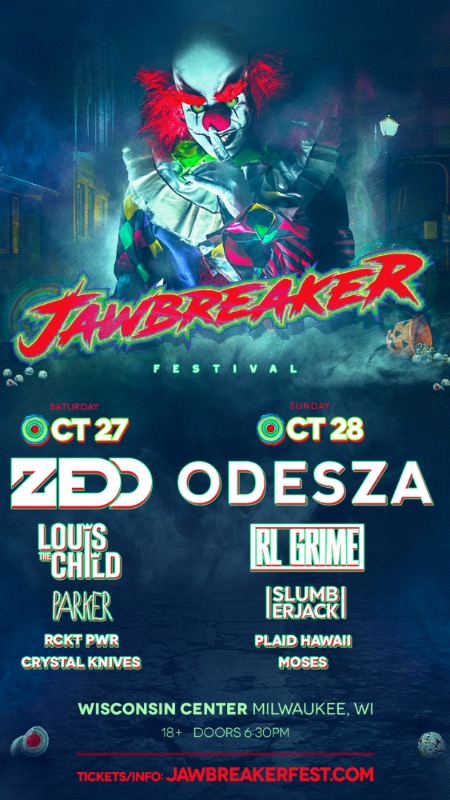