Jewels Caribbean Restaurant promises a tropical escape both in terms of atmosphere and cuisine will offer a menu filled with family recipes for dishes that conjure the flavors of Trinidad, Saint Lucia and the surrounding islands.

Beginning Saturday, Nov. 24, Milwaukeeans will have the opportunity to experience a taste of the eastern Caribbean. That’s thanks to the opening of Jewels Caribbean at 2230 N. Martin Luther King Dr., a restaurant that's been more than a year in the making. 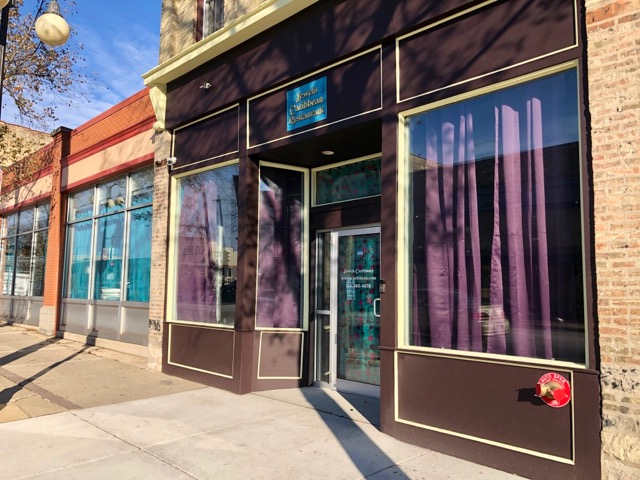 The restaurant, which promises a tropical escape both in terms of atmosphere and cuisine, will offer a menu filled with family recipes for dishes that conjure the flavors of Trinidad, Saint Lucia and the surrounding islands.

At the helm of the new family owned and operated restaurant is Lennora Jules, a Milwaukee native who works in the music industry in Los Angeles. Her parents, Lucile and Selo, are originally from the Caribbean island of Saint Lucia and her sister, Natasha, has taken the reins in terms of the restaurant’s day to day operations.

The interior of the restaurant – which has been transformed from a retail space into a vibrant bar and eatery – sports beautiful jewel-toned walls and art that aim to capture the look and feel of the eastern Caribbean islands. 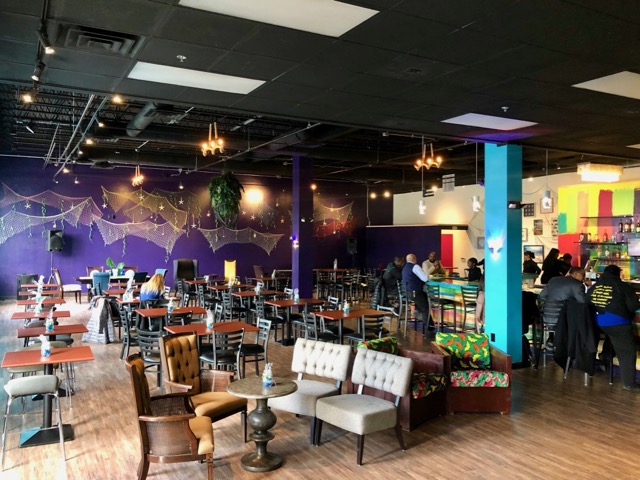 "What we really wanted was to create a really inviting atmosphere," notes Natasha Jules of the space. "Ultimately, we wanted it to be the type of place where we would like to go." 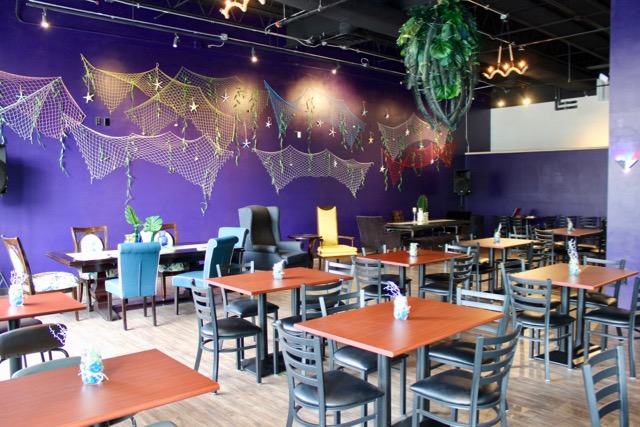 The whole of the restaurant is welcoming and includes plentiful seating in the large dining room as well as plenty of spots at the convivial bar, which serves up a menu of wine, beer and tropical specialty cocktails.

In fact, the bar is a focal point with its rainbow-colored back wall which mimics the look and feel of the fruit shacks and boats that linger along the shores of the Caribbean islands. 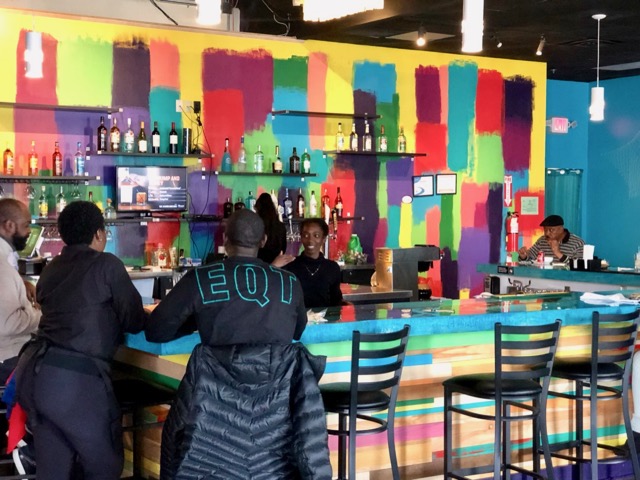 Even the bar top itself is a glistening Caribbean blue augmented with a river of jewels, sand dollars, starfish and seashells, many of which were gleaned from Caribbean beaches. 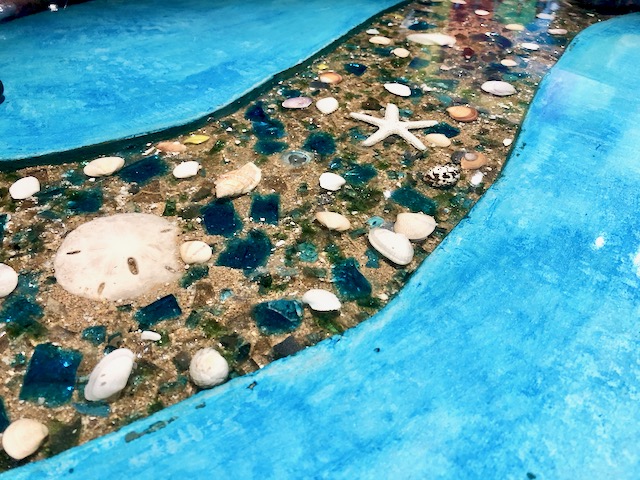 At Jewels Caribbean, you'll find popular Caribbean staples like jerk chicken and rice and peas. But you'll also find a variety of dishes from the Lesser Antilles of the Caribbean.

Take for instance the accras, tender fried salt cod fritters served with a gingery dipping sauce ($9.99). They appear on the appetizer menu along with Jamaican patties, tender flaky dough stuffed with a choice of beef or vegetable fillings (two for $7). 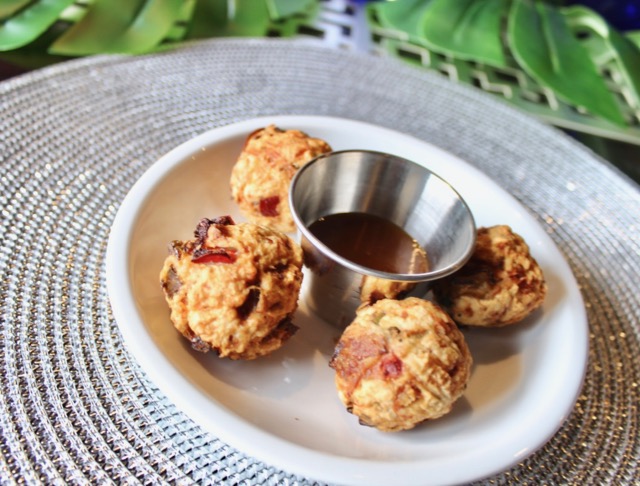 There are salads, including a tropical mango salad with mixed greens, cucumbers, mango, red onions and balsamic vinaigrette ($8.95) and a creamy kale salad with kale, red onions, raisins and sunflower seeds ($8.95, egg-free mayo dressing is available upon request). Soups include a warming Trinidadian corn and yellow lentil soup along with a Caribbean butternut squash soup. Both are $6.50 per cup or $8 for a bowl. 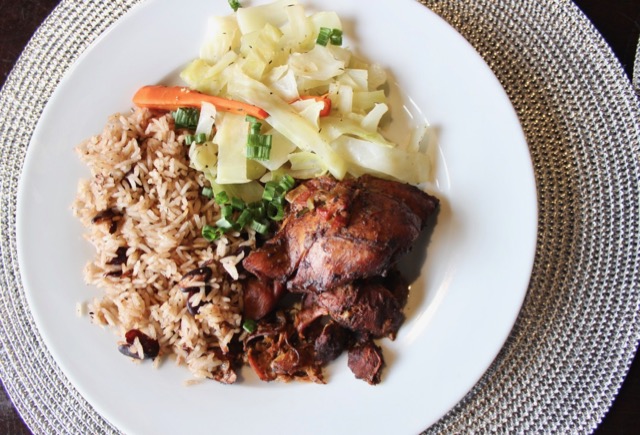 Meanwhile, vegetarians can indulge in creole vegetables stewed with chickpeas and tomatoes served with roti ($9.95) and rasta pasta, tri-colored rotini tossed with vegetables, spices and a creamy coconut-based tomato sauce ($9.95).

Jules says the restaurant will also be adding a number of specialty desserts including rum cake, Trini black cake and bonbon mouchas (starch cake), small bite-sized treats traditionally made with cornstarch, lard and sugar and flavored with anise.

For lunch, guests can enjoy numerous soups, salads and entrees including curry chicken with rice and peas ($10.95); a callaloo plate with steamed Caribbean greens and ground provisions ($7.95); roti rolls filled with peas, carrots, potatoes and a choice of vegetarian, curry chicken or curry beef filling ($8.50); and coconut shrimp over greens with apricot pineapple glaze ($10.95).

The menu also includes a variety of sandwiches including Jewels’ signature jerk burger ($9.95), a salmon sandwich with lettuce, tomato and avocado dressing ($10.95) and a sandwich made with pulled jerk chicken ($10.95).

On Saturday and Sunday, guests can also enjoy a brunch menu featuring a number of American dishes including pancakes and waffles ($7.95-8.25) and bacon and eggs ($7.50) along with Saint Lucian staples like saltfish and bakes (fried breakfast bread) served with cocoa tea (a cocoa flavored tea made with cocoa pods and spices) for $8 or creole breakfast featuring sauteed saltfish served with bakes, green fig (bananas) and avocado ($12).

There’s also Caribbean bread pudding ($8), crepes Suzette featuring tropical fruits and coconut rum syrup ($8) and "Shark n Bake," a Caribbean street food staple featuring fried fish and vegetables served on a "float" bun (a bun-shaped variation of Caribbean bakes). Save room for dessert because there are also banana fritters which we suspect are fantastic alongside a cup of coffee ($5).

The grand opening and hours

Jewels Caribbean will host a grand opening party on Saturday, Nov. 24 from 6 to 9 p.m. featuring music from Kojo, a Caribbean group whose repertoire includes both original music and covers of dub and roots reggae, calypso, soca and zouk.