Among Milwaukee music fans there are some legendary concerts. The four sets performed by the Jimi Hendrix Experience over two nights at The Scene, 624 N. 2nd St., Feb. 28-29, 1968, are definitely in the top five of most any such list.

On Friday, Sept. 18, in observance of the premature passing of guitarist Jimi Hendrix, we are re-sharing two stories we wrote about his appearances in Milwaukee. This is one of them. The other can be found here.

Among Milwaukee music fans there are some legendary concerts: The Beatles at the Arena, Nirvana at The Unicorn, Springsteen’s "bomb scare show" at The Uptown.

The Scene, which operated from 1965 until 1971 in the Hotel Antlers (later, the club was home to the Centre Stage Dinner Theater), which was torn down in 1982 for the construction of the Grand Avenue Mall, was owned by Frank Balistrieri and it booked serious top-name talent. 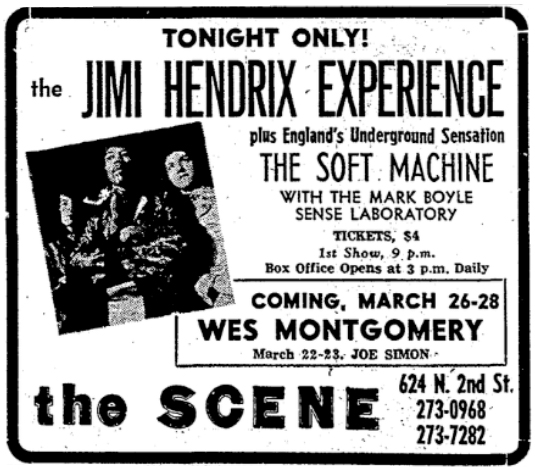 Booked by Balistrieri's daughter Benedetta, who had become manager of the venue, Hendrix brought his classic trio – including drummer Mitch Mitchell and bassist Noel Redding – to The Scene as part of the tour for the band’s second LP, "Axis: Bold As Love," which had been released the previous December.

The band’s engagement at The Scene fell between gigs there by Duke Ellington and jazz guitarist Wes Montgomery.

"Hendrix's popularity at this point was already reaching astronomical levels and his guitar playing prowess well known and universally accepted," wrote Stephen Lewis about the tour on his "Talk from the Rock Room" blog.

"This was the group’s most extensive tour of the States and the band was practiced and playing demagogic shows every night."

Tickets for the Hendrix shows – there were two 45-minute shows each night, beginning at 9 p.m. – cost $4.

Fortunately, someone had the foresight to record the first night’s shows, which have long been available on the bootleg circuit. You can hear the entire first night’s performances here:

The result is that we also get a look at the set list the band was playing...

"This performance finds ... the Experience supporting (Hendrix) in peak form," Lewis wrote of the first night’s performance. "(It) is a beautiful portrait of the raw dynamism of Hendrix's guitar. Hendrix played an early and late show on this day, but in my opinion they play out like one complete show. The only repeat song between the two performances is ‘Foxy Lady.’ 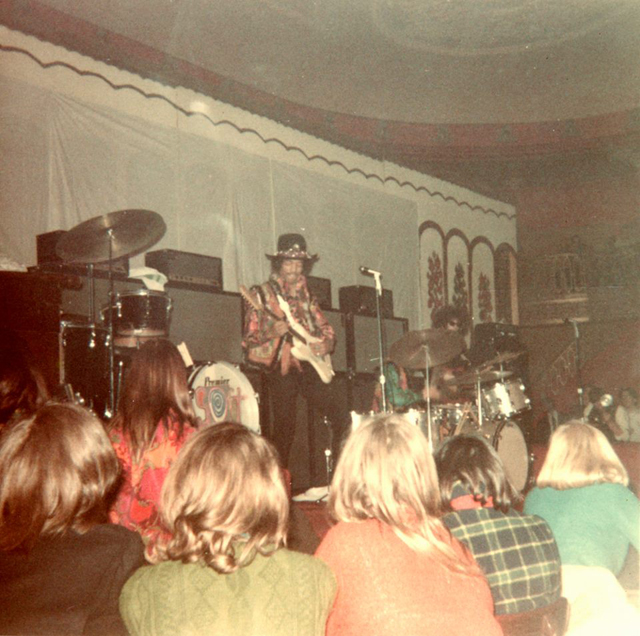 "A provocative and legendary performance," he continued. "This (show) finds the Experience learning how to play together and like a child with a new toy, experimenting and having a good time doing it. The band (was like) a comet streaking across the night sky, short-lived, but illuminated and intense, flashing bright before disappearing into rock history. Before long Hendrix would be switching band members, writing new and diverse music, and continuing to change the way guitars are played."

Respected blues guitarist and Milwaukee native Jon Paris was there.

"Two shows a night, two nights in a row, (I) went to all four shows," he recalls. "The Soft Machine opened and they were great. I especially loved that The Experience played the blues. People were yelling for (hits like) "Purple Haze" and "Foxy Lady," and at one point Jimi said something like, ‘Aw, you want to hear all that garbage? We want to play some real music for you,’ and out came ‘Red House,’ ‘Hoochie Coochie Man,’ ‘Two Trains Running.’ (It was) truly a life-changing experience!"

Lewis continued: "This pair of shows (shows) the Experience is full experimental mode." One reason the recording of the performance is especially treasured by Hendrix devotees is that the group never played "Bold As Love" in concert ... except at The Scene. 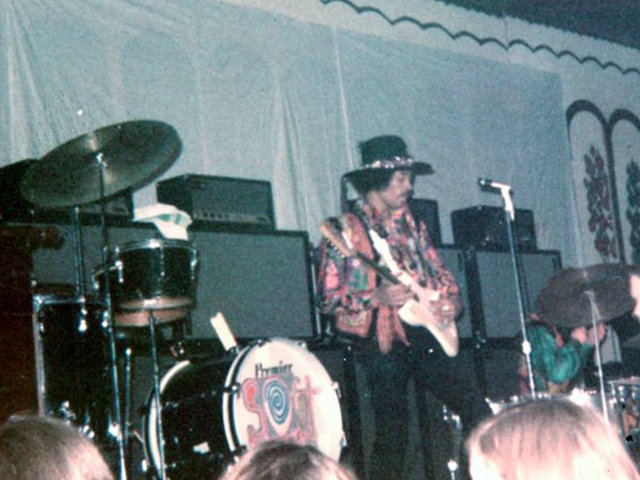 "A scarce and freewheeling instrumental of ‘Bold as Love’," Lewis called it, "which starts mellow but soon accelerates smoothly into an extended guitar extravaganza. Jimi then takes off on a tour of the ‘Bold as Love’ theme with some syrupy extended runs. A beautiful moment expressing Jimi's melodic prowess, and a rare little gem. Jimi's Stratocaster sings the lyricless melody in ways words could never do justice. Jimi often opened his performances with warm up instrumentals, using the stage as a ‘live workshop’ for new material."

When some photos of the performance were posted to Facebook, a number of folks who had been at the intimate concerts shared memories.

Barbara Pompe Pellowski, who had a primo spot 15 feet from Hendrix, remembered that Jimi smashed his guitar at the show. 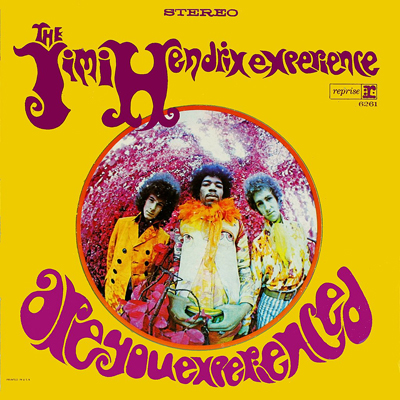 Jeff Mace recalled that at the show he attended, Hendrix wore the vest adorned with eyes that he can be seen wearing on the cover of 1967’s "Are You Experienced" album cover.

"The Scene was still a nightclub," Mace remembered. "We sat at tables and were served by waitresses."

Laurie Oseland Ganiere posted, "I was there. Remember where I was sitting. Didn’t realize then how monumental it was."

Bob Dickey said, "It was really loud ... and really good!"

Music business veteran Sid Schwartz claimed that Hendrix and company were meant to perform in Chicago on Feb. 28-29, but a request from Frank Balistrieri led to a change.

In his self-published memoir, "From Jimi Hendrix to the Dalai Lama: A Journey Through Times Past," Schwartz claimed, "Now and then I asked Frank for some money. He’d reached in his pocket pull out a few hundred bucks and say, ‘Here, kid,’ So I sold the Jimi Hendrix dates to Frank."

This, Schwartz said, led to a call from Hendrix’s irate attorney in New York City. 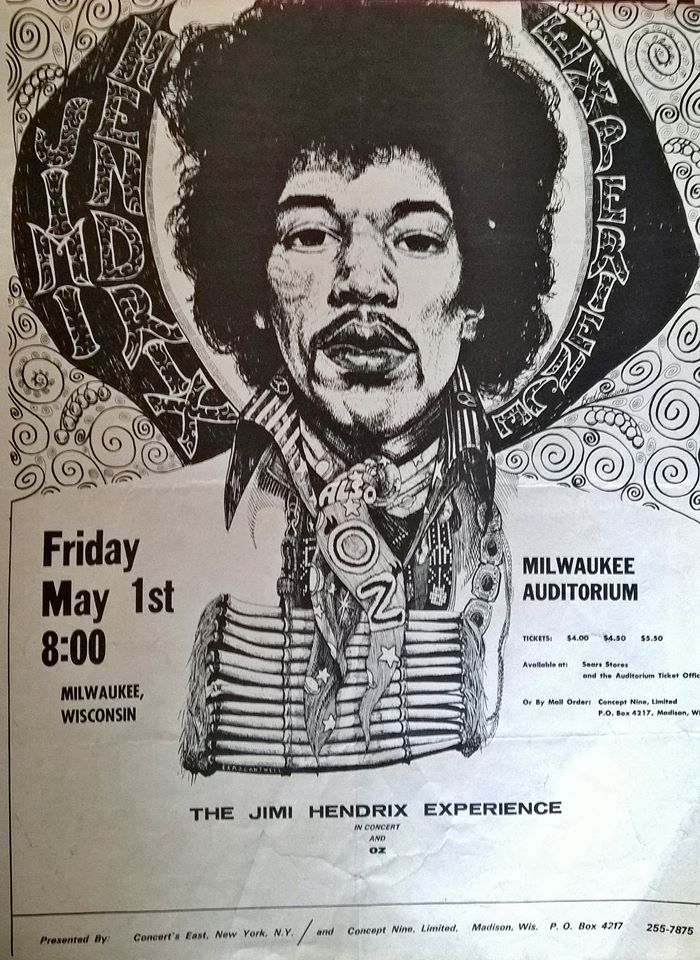 A few days later, that had changed, and the attorney called back. "‘Hi Sid,’ the voice said ... ‘I can see the difficulty, so let’s not pull the dates. ... Tell him we are doing the dates as much reduced rate for him, but in return we want Jimi taken care of first class’."

Whether or not that story is accurate, I can’t say.

What I can say is that Hendrix would return to Milwaukee for one more gig – on May 1, 1970 – with his new Experience at the Auditorium.

That trio – with bassist Billy Cox and drummer Mitchell – also played in Madison the following night.

The poster at right is courtesy Facebook's Old Milwaukee group, where it was posted by Steve Orth.

On Sept. 18, 1970, Jimi Hendrix was found dead in London, and another creative flame was extinguished.