At the helm is co-owner Jessie Jin, who also operates Lovers Lane Sushi & Seafood Buffet in Franklin, says the Jin's concept is distinctive.

"We wanted to offer people a higher end experience," she says. "The goal was to create a space that’s modern, but also cozy and welcoming to guests and their families." 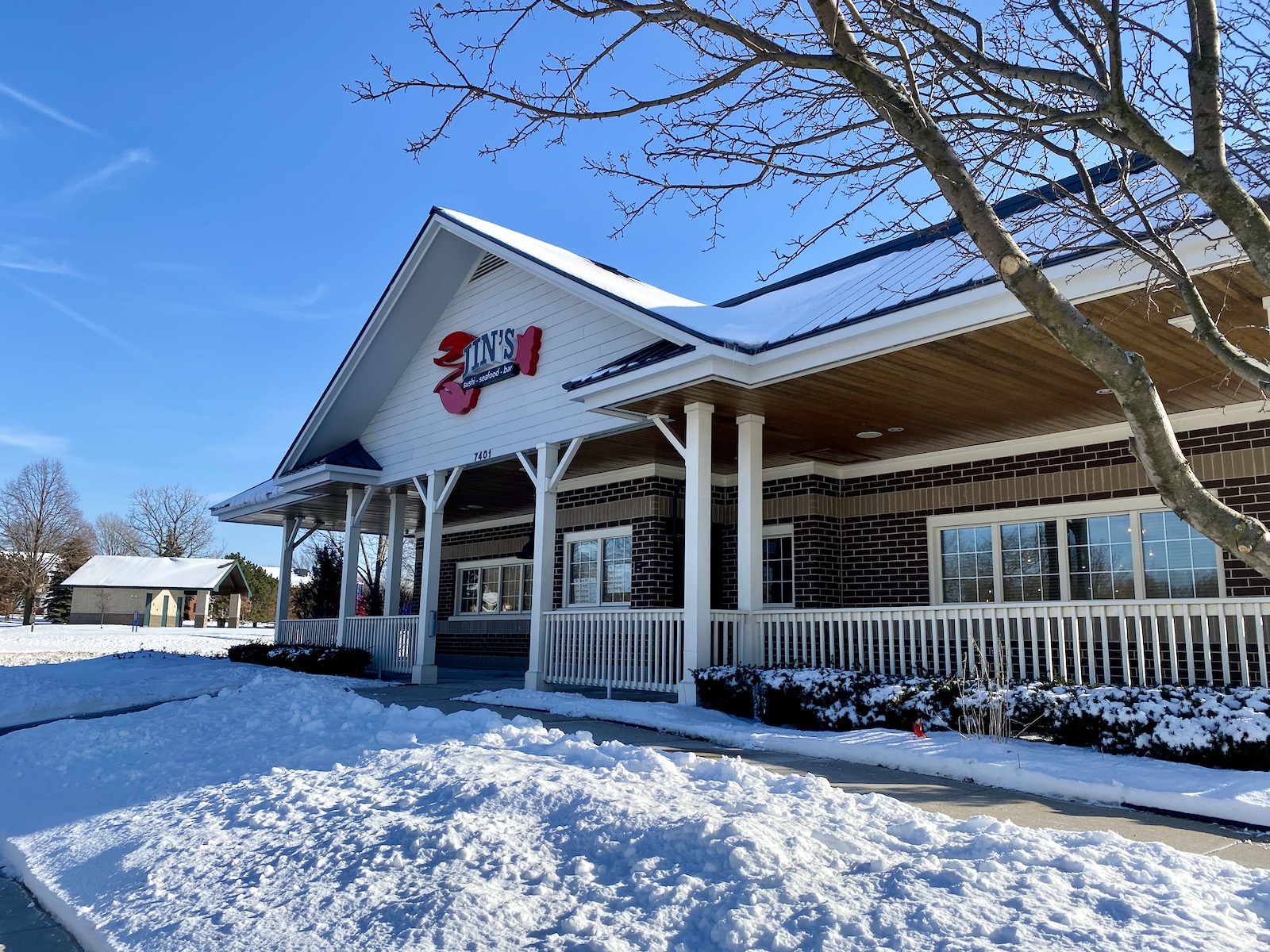 The 6200 square foot restaurant, which formerly housed an Outback Steakhouse, is some of both. In addition to a large 2,000-square-foot kitchen, the restaurant features two substantial dining areas both of which flank the restaurant’s full service bar, where guests can enjoy sushi or gather to watch the game on the bar’s television.

The bar, which incorporates a double-sided water feature, offers a full complement of draft beer (Japanese, craft and macro), wine and sake along with a menu of signature cocktails, including the Japanese cocktail (c.1862) made with cognac, orgeat, lemon and bitters; a lychee martini and Jin’s old fashioned made with Mars Iwai 45 Japanese whisky, mirin, orange, bitters and club soda. 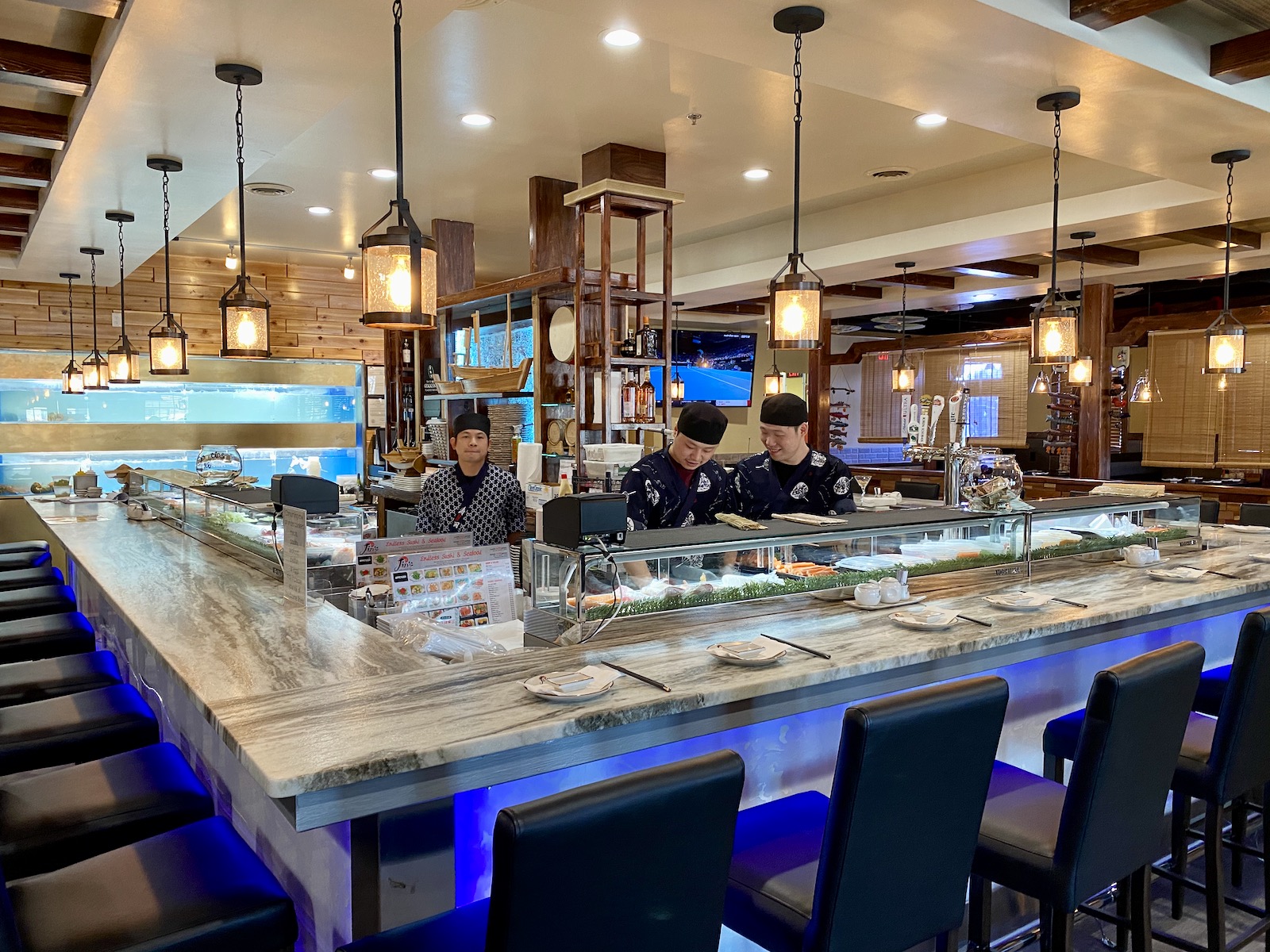 The bar sits astride a wall of polished tanks which house the restaurant’s supply (often hundreds) of fresh lobsters, which are delivered to the restaurant weekly, along with a variety of other live seafood including scallops, mussels and oysters.

The decor throughout the restaurant is well appointed and filled with detail work, including the artful floor to ceiling cherry tree which greets guests with bows filled with realistic looking blooms  that look as if they're being swept across the front of the restaurant by an artful wind. 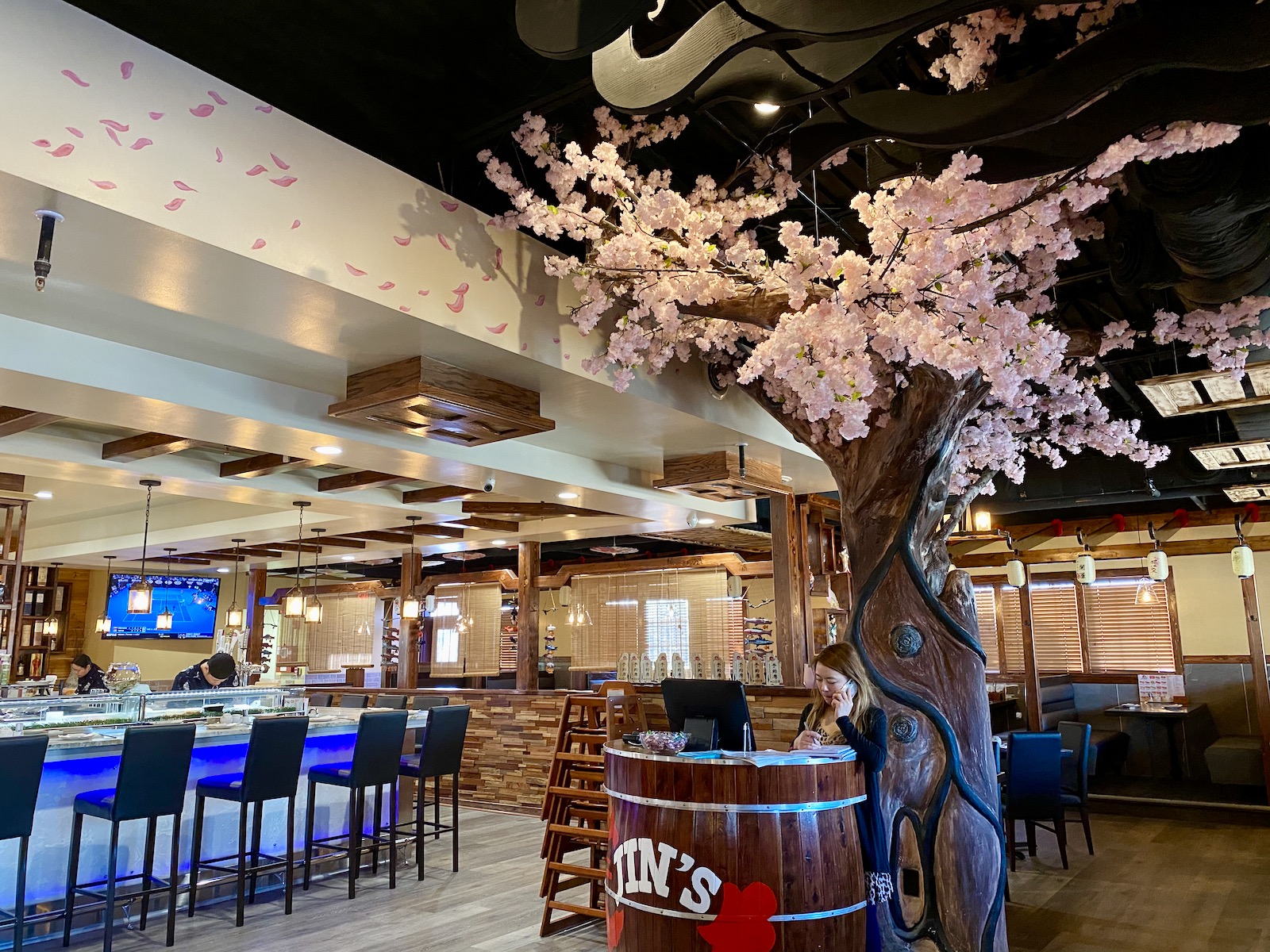 To the south, a dining area comprised of primarily cozy booths is augmented with warm wood, greenery and lanterns. 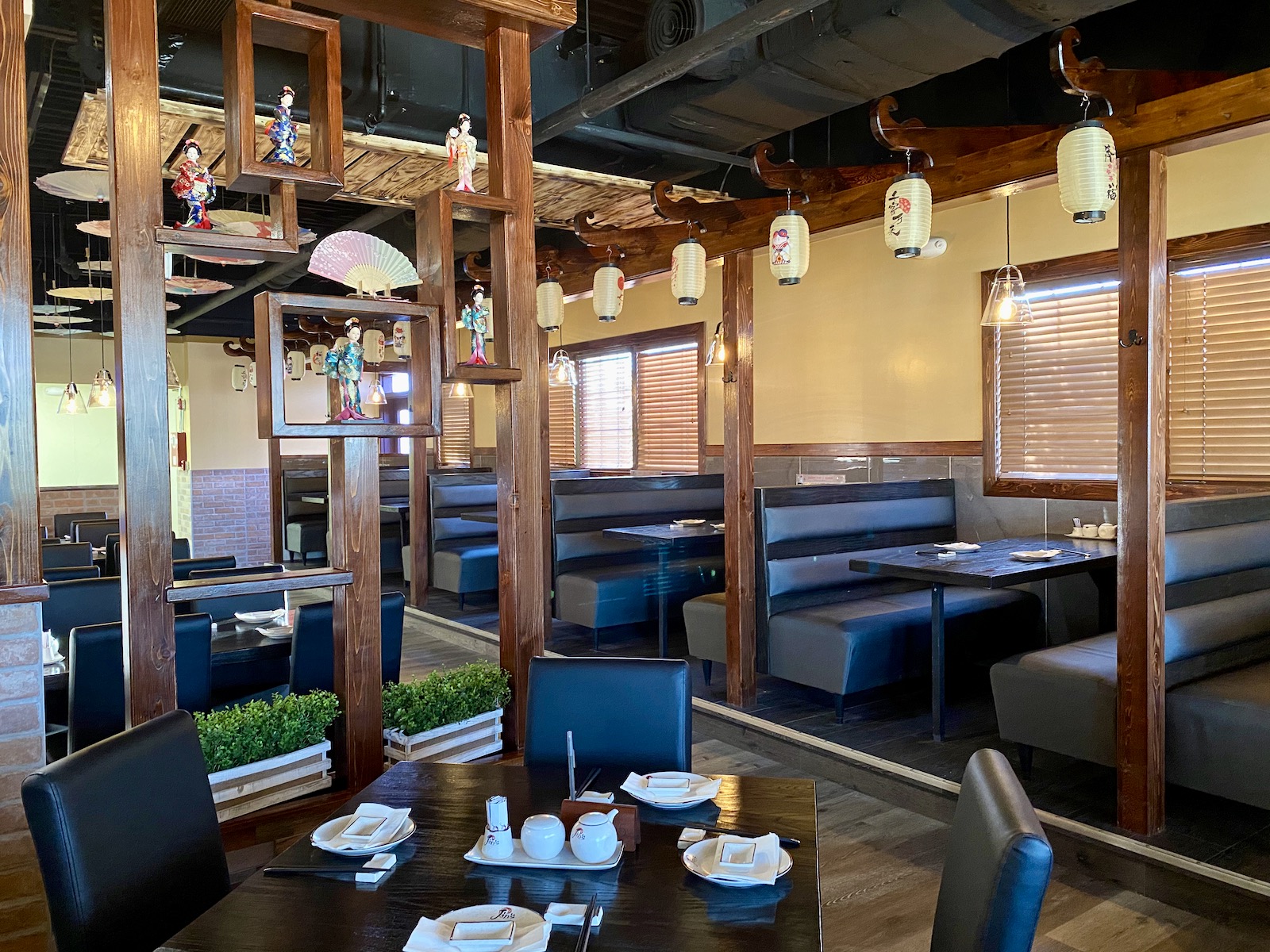 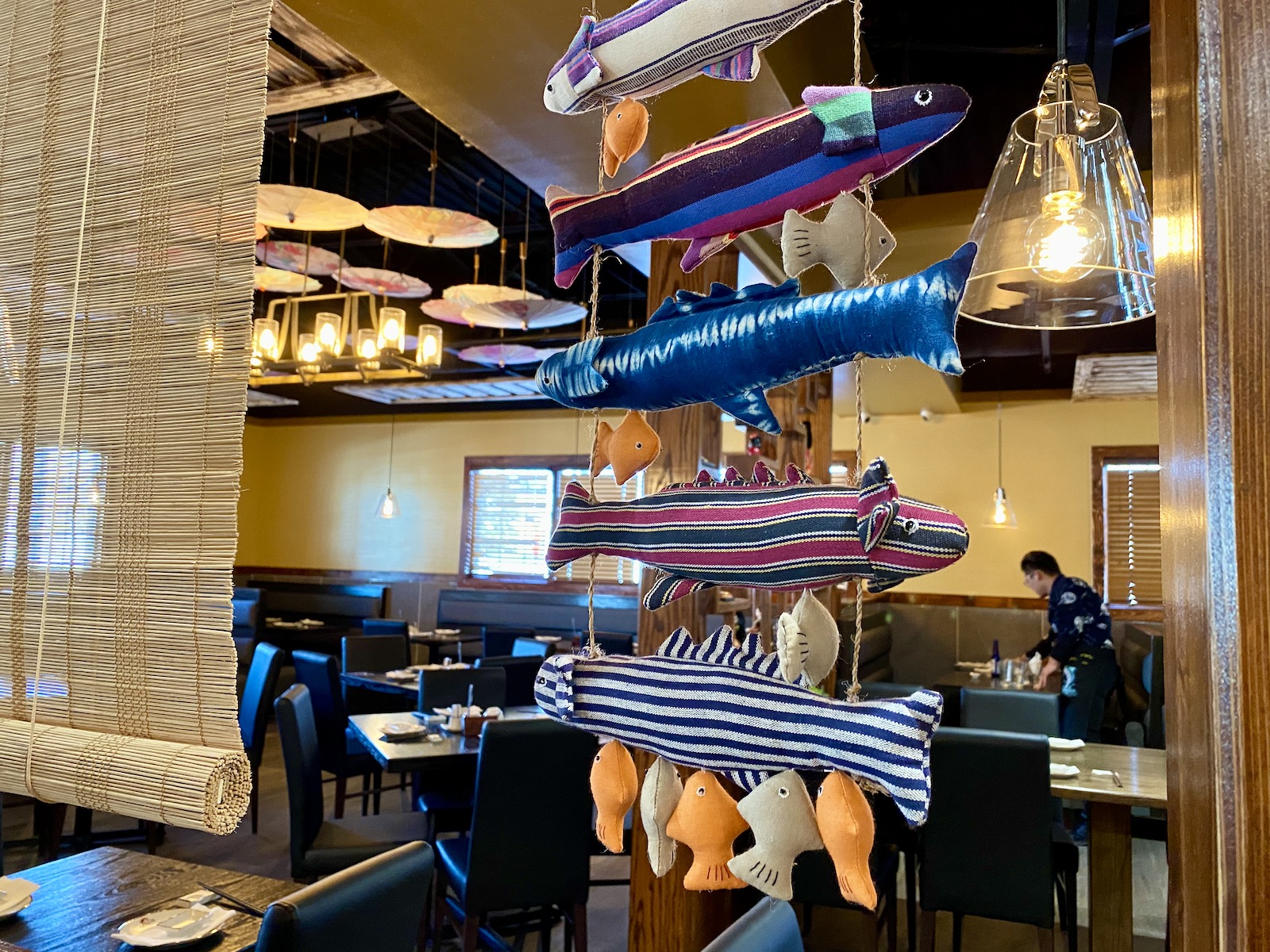 On the northern side of the restaurant, the dining room showcases a display of Japanese parasols hanging from the ceiling along with a room divider comprised of wooden shelving filled with a collection of Japanese figurines and painted pieces of art. 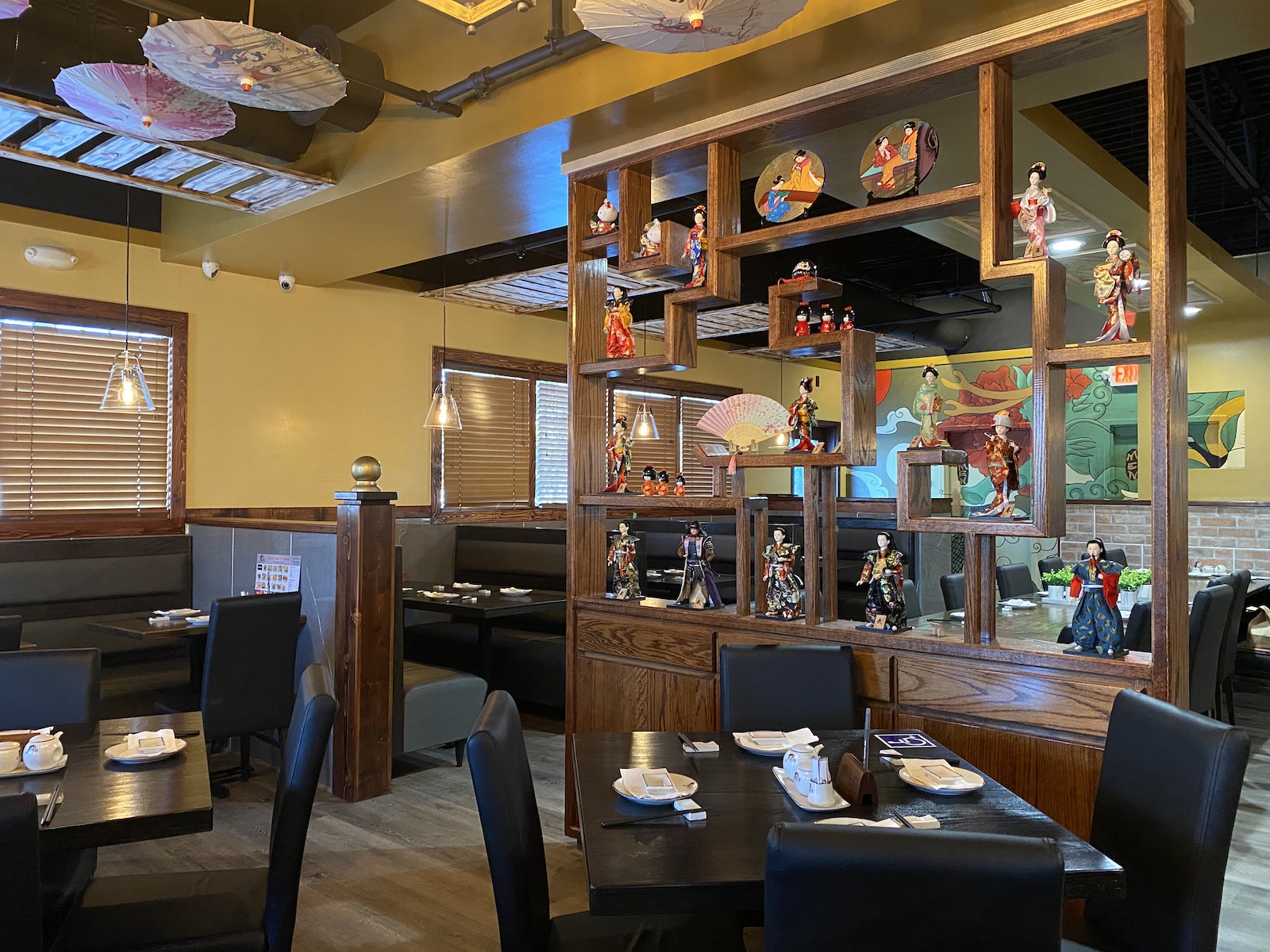 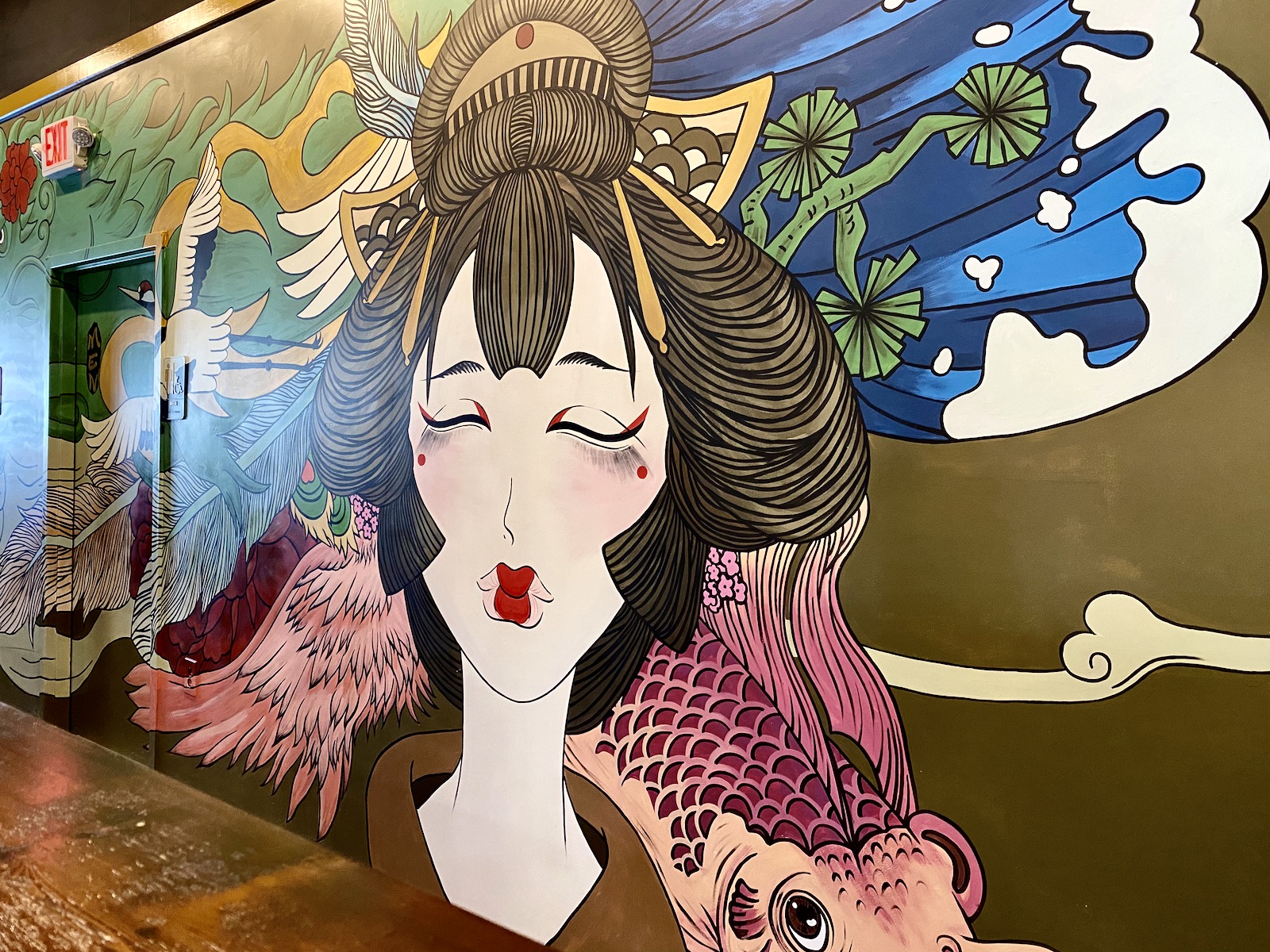 A focus on seafood

Jin says she grew up in Qingdao, China, a coastal city known for both its seafood and its beer, which includes the internationally popular Tsingtao.

"When I was growing up," she says," seafood was something we ate every day. And – even now – if I go too long without eating good seafood, I begin to feel dead inside."

Her love for fresh seafood was one of the impetuses for creating Jin’s. The other was creating an environment where she could offer guests the best possible hospitality. "Our customers are our first priority," she says. "We want our guests to be happy ... we want to bring happiness to people." 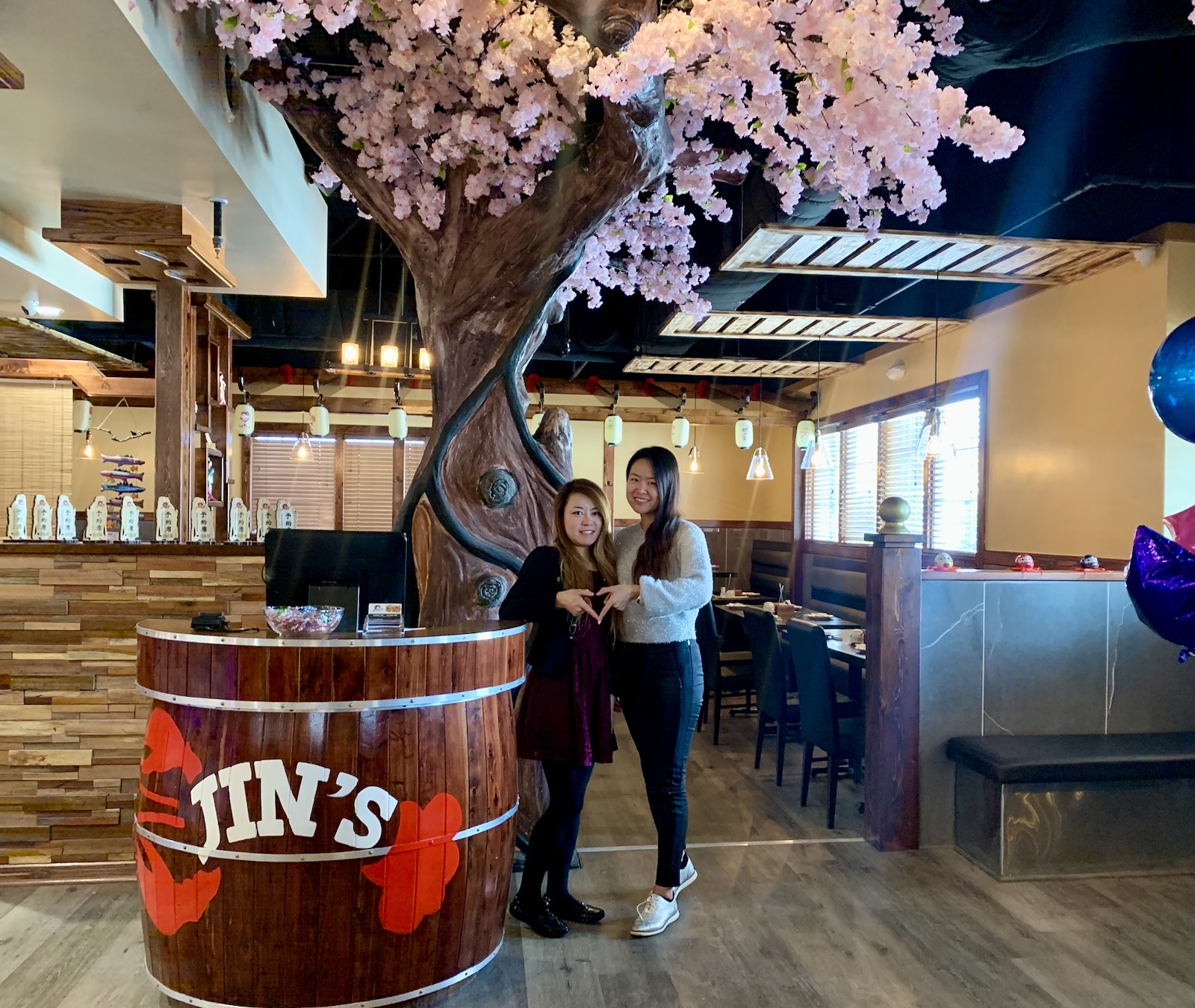 To execute her vision, Jin brought on expert chefs including Chef Zhang, a native of the Szechuan province in China and Sushi Chef Weng, who boasts over 20 years of experience working with sushi in New York.

Together, they execute a highly flexible menu that features a combination of appetizers, sushi and seafood dishes, all of which can be ordered individually or as part of the restaurant’s endless sushi and seafood offering.

Appetizers include popular items like crab rangoon, gyoza and soft shell crab along with hamachi collar and marinated squid salad (priced $3.95 to $9.95).

There’s also sashimi, nigiri sushi and maki, including both standards and signature rolls like the Color Dragon roll and the Mango Tango (pictured). Rolls are priced $13-16 each. 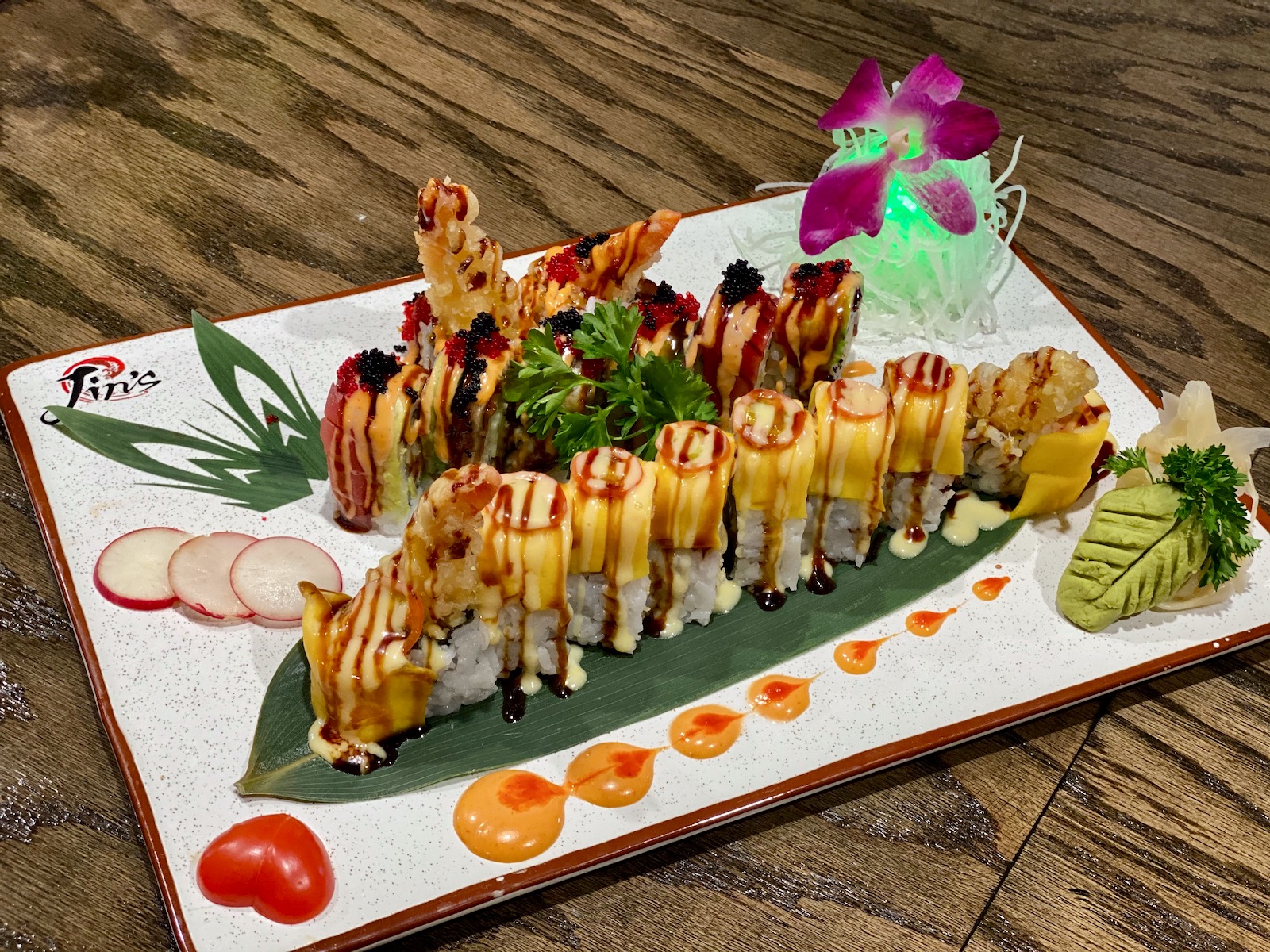 Guests can also enjoy a variety of seafood dishes, including steamed scallops in garlic sauce served in the shell on a bed of glass noodles. 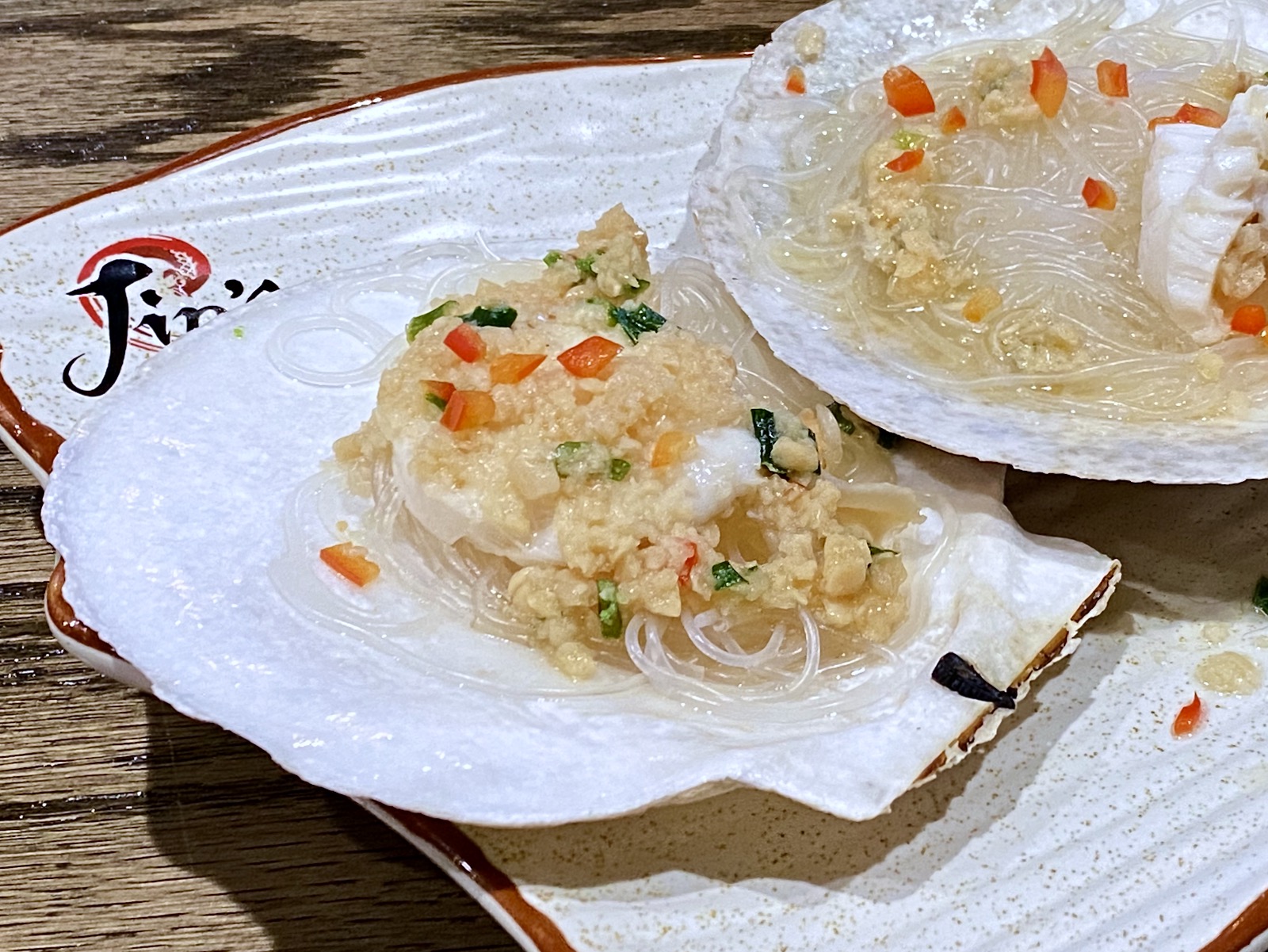 There are also raw oysters, served on the half shell or steamed with black bean sauce, steamed snow crab legs, lobster, available steamed or served with ginger sauce or spicy Sichuan sauce. 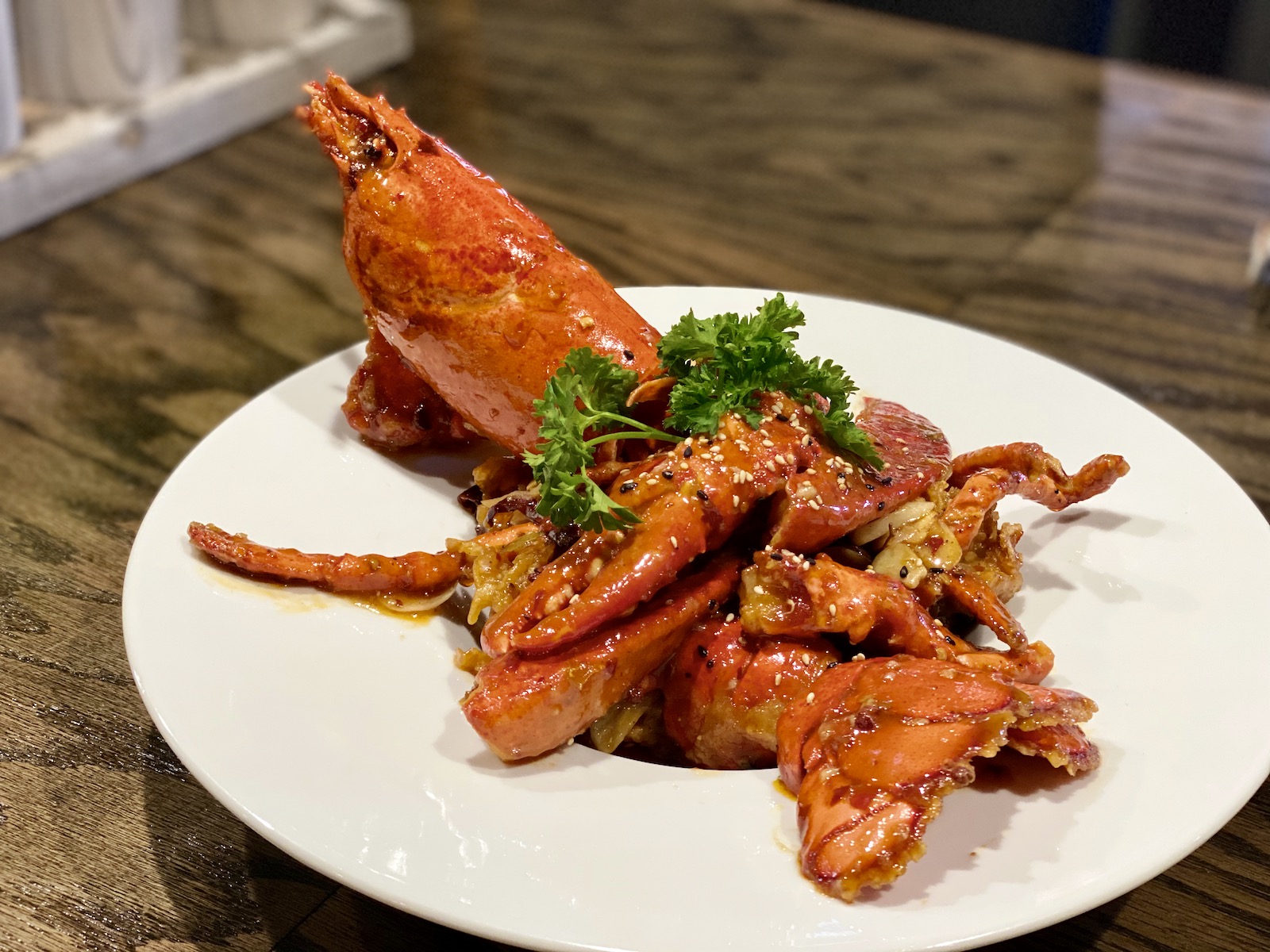 There’s also a Sichuan version of the Southern seafood boil available with mussels, shrimp, crawfish, corn and potatoes cooked in a pepper-infused sauce.

Guests can enjoy dishes a la carte or as part of Jin’s "Endless Sushi & Seafood" offering, which is available for lunch ($16.99 per person until 3 p.m.) or dinner ($24.99 per person). Special pricing is also available for children under 9, based on age ($4.50-$13.50). Customers simply fill out a menu card with their meal selections  and turn it in to waitstaff to order.

All items are included in the price, from appetizers to desserts. But guests are asked to order only what they can eat; and if a table would like to share a wide variety of items (sharing is encouraged), each person at the table will be charged for the endless menu.

Guests should also note that some seafood dishes are accompanied by a minimal upcharge (lobster dishes are $5 extra, for instance).