As author of "My Son Wears Heels," Julie Tarney provides support for parents of gender non-conforming, non-binary, trans and queer children. But what does it mean to be "out" as a family in today's America? Tarney and her son Harry Hanson explain in their own words.

The Milwaukee Pride Board of Directors also presented the first-ever BeOUT Award for LGBTQ Visibility, which honors driving forces that elevate image, reputation and awareness of LGBTQ people, culture, history and critical needs. 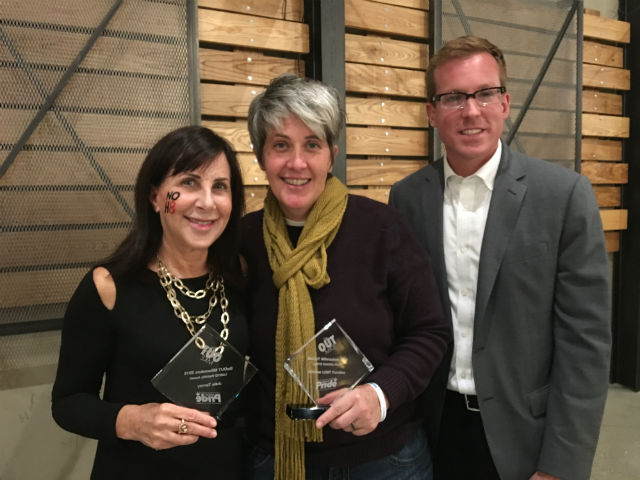 As author of "My Son Wears Heels," Huffington Post blogger, writer for the True Colors Fund, volunteer for PFLAG New York and board member of the It Gets Better Project, Tarney provides relentless support for parents of gender non-conforming, non-binary, trans and queer children. Inclusive parenting resources didn’t really exist when Tarney began her journey, but she has become the change she wanted to see in the world.

"I couldn’t be more thrilled to accept this most meaningful award in person," said Tarney at last week’s awards ceremony. "I am most deeply honored."

After living in Milwaukee for many years, Tarney and her son Harry Hanson now reside in New York City. But what does it mean to be "out" – as a family – in today’s America? Tarney and Hanson explain in their own words.

OnMilwaukee: Society suffers from a limited understanding of the gender identity spectrum. Most children are raised to believe that "either/or" is the only option, with no discussion of "and" or "neither." How can we challenge – and change – that narrative?

Julie Tarney: The "either/or" narrative is being challenged, and children and their families are driving much of the conversation. I was one of those people with a limited understanding. In fact, I’d never hear the term "gender identity" until Harry was in college, and I heard him use it. Back in 1992, when Harry was two years old and told me, "Inside my head, I’m a girl," I thought he was confused. Gender to me just always meant one of two boxes I checked on my driver’s license application. I didn’t realize there are people who say I don’t fit into either the boy box or the girl box. I was the one who was confused, not Harry. So I’m hopeful my book will help people see that a child as young as two or three knows who they are inside, and that there is no right way to be a boy or a girl.

You can learn as much from your kids as you do for your kids.

I think it’s really education and personal experience that will change society’s limited narrative and engrained stereotypes for children. And for many adults, that will require a fair amount of unlearning. Truth be told, kids today get it. They’ll tell you that there is no such thing as "boy clothes" or "girl clothes," and that the same goes for toys and colors and careers. Thanks to children’s books like "I Am Jazz,"and most recently a transgender child actor on "Modern Family," kids understand that a child can be born with a "boy body" but have a "girl brain." Ideally more adults will come to understand that, too.

I also think it’s going to take people knowing someone who’s transgender or gender non-conforming for real change to take place. We’re just starting to hear more and more stories from the transgender community. And as more kids are coming out younger, and sharing their stories and talking about their lives and what their hopes are, I think society will see that transgender and gender-nonconforming kids and adults are just like anybody else.

I think that higher visibility and awareness probably contributed to the Michigan State Board of Education setting policy guidelines last month for the inclusion of LGBT content in classrooms and for teachers and administrators to receive training on issues affecting LGBT students. It’s never too late to learn, or unlearn. 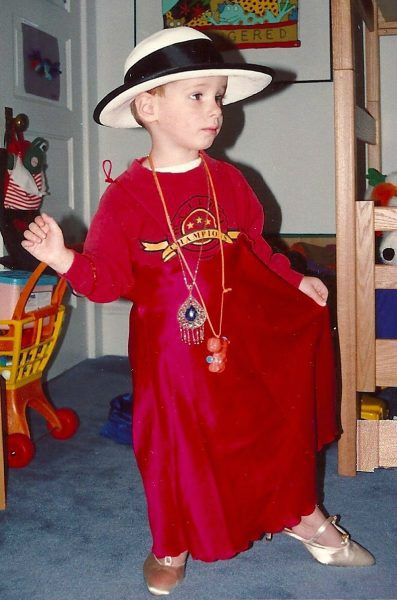 "My toddler was a gender rebel," writes Tarney in her blog, "My Son Wears Heels."

Gender non-conforming individuals are regularly confronted by other people's expectations of how they should define and present themselves. Criticism from within the LGBTQ community can be as harsh as criticism from non-LGBTQ people. How do you respond when someone imposes their expectations upon you?

Harry Hanson: Unsolicited opinions from strangers honestly mean nothing to me. If anything, I find them amusing. People will always make assumptions about you or place unfair expectations on you, regardless of your gender or appearance, so I don't take it personally. I try to respond with patience and compassion when I feel like someone has an honest question for me, and I disengage as quickly as possible when someone makes a rude comment.

I haven't always been so self-assured, but as I've matured and strengthened my network of badass LGBTQ people, gender non-conforming individuals and allies, it's become a lot easier.

Although Milwaukee families have more resources available to them today, the prevalence of bullying, homeless queer youth and teenage suicide confirms that it's not nearly enough. What is the most critical resource that gender non-conforming children and their families need immediately?

Tarney: It’s true there were few resources back in 1992. Parents like me were up against a lot. I’m meeting more and more parents who are educating themselves and learning about the support community, resources, expertise and research that exist for them today. Organizations like PFLAG Milwaukee, Gender Spectrum, TransYouth Family Allies and My Kid is Gay work nonstop to connect families of gender-nonconforming children and youth. They also provide a wealth of educational tools and strategies for those kids to grow up to be confident, resilient and hopeful adults.

Your question is tough, because many valuable resources already exist online and within local communities. So if I had to name one critical resource those kids and families need right now, I’d have to say they need more time. And I don’t mean that as a cop-out. It gets back to the education I talked about in response to your first question about changing the national narrative to the benefit of gender-nonconforming kids. It takes time to change hearts and minds.

The statistics of bullying, youth homelessness and teen suicide you mentioned are staggeringly grim. I was shocked when I first heard that of the 1.6 million youth who are homeless in this country, 40 percent of them are LGBTQ kids who have been rejected and kicked out and by their family. I hope the parents of all gender diverse children take the time to learn about and understand their child. And then armed with the wealth of information that exists, they can become their child’s advocate within the extended family, at school and in the local community. I want every parent to project a happy future for their gender-nonconforming child and do everything they can to see that child thrive and be happy in their life.

Parents often struggle with offering the "right" type of support to their LGBTQ children. What advice would you offer parents on being supportive, authentic and genuine – without being overbearing?

Tarney: Well, I’m not an expert. I don’t have a degree in child psychology or gender development. I just have my own firsthand experience as a mom. And I’ll admit I was definitely a mom with inborn controlling tendencies. But I’ll tell you I don’t think there’s anything more supportive, authentic and genuine than unconditional love. A smile, a hug and a pat on the back go a long way. And believing what your child is telling you and reminding them often how much you love them just as they are just might be the most welcome support. And if your child’s a teenager, ask what they need from you. Sometimes they just want to be left alone or the freedom to hang out with their friends. And if that’s the case, you can remind them you’re always available if they ever want to talk.

I think it’s also important that parents of LGBTQ teenagers not expect those kids be their teachers about what LGBT or Q means. It’s not their job to educate you. They can tell you how they’re feeling when they’re ready or have something to share. So while parents can remain ready to listen, they can be learning as much as possible from the resources and support communities I mentioned earlier. 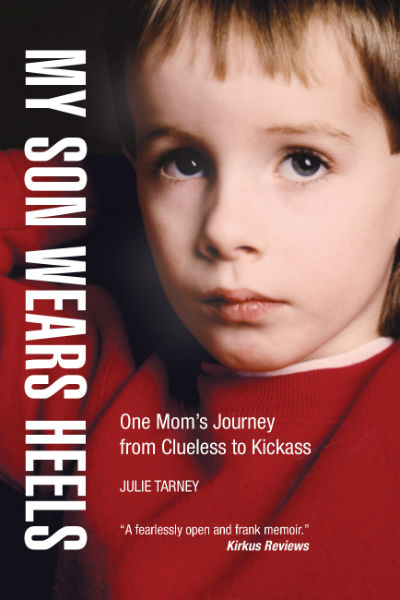 "My Son Wears Heels" is available at local booksellers, including Boswell Book Company.

You've been on an incredible journey together. What words of encouragement would you give to your younger selves, at your most challenging moments?

Tarney: I’d encourage my younger self to love more and worry less. To not care what other people thought. I’d tell myself to just be present in the moment and enjoy Harry’s happiness.

Hanson: I'd like to tell my younger self that other non-binary people are out there! They're on the internet, and they're in New York City, and you will be part of an incredible queer community one day. Also stop shopping at the mall ASAP, you'll be way happier.