Stuck in a limbo between rock and jazzy blues, Kaleo might be a band that you haven't heard of yet. Named after the Hawaiian word for "the sound," the group brought more than just a single sound to Turner Hall Wednesday night. Kaleo brought many.

Named after the Hawaiian word for "the sound," the Icelandic genre-limboing rock 'n' roll/jazz/blues group Kaleo brought more than just a single sound to Milwaukee. Kaleo brought many – as well as many fans for a band that may be an unknown to some.

The initial cheering died down after a moment as the four members of the Icelandic band took the stage at Turner Hall Ballroom for the first time on Wednesday night. The four were quiet as they seemingly tuned their instruments, then suddenly concerted into the opening riffs of popular track "Can’t Go On Without You." The crowd stood in awe, eyes fixed and jaws silently dropped, as lead singer and guitarist JJ Julius Son aptly whistled the first few notes. As the first words dripped from his mouth, his voice was thick, velvety and loaded with heartfelt talent.

The musical expertise did not stop there. As the show waged on in the rustic ballroom, the walls trembled with bassist Danny Jones’ ardent strums. Chills seeped down the audience's collective back as riffs left the strings of Rubin Pollock’s guitar as he played "All the Pretty Girls" beside Julius Son’s falsetto ballad and the crowd’s hushed singing along.

With few conversational interludes, it was clear that Kaleo aimed to showcase its pure and weighty music. The band played a number of slower, lamenting songs near the beginning of the show, while the crowd swayed and whispered along to the near-country jazz set list. All four artists were dressed modestly, sporting simple t-shirts and jeans – except, of course, drummer David Antonsson Crivello, who wore a purple tiger robe until he realized that Milwaukee is not quite as chilly as Iceland.

The robe really came off when the group decided to take it up a notch, showing off its nearly flawless rock and roll thunder. The audience screamed and bounced up and down as they heard the opening abrupt chords to "No Good." What seemed at first to be a shy, reserved group of musicians colorfully burst into a full-fledged classic rock mantra. Crivello could barely stay seated as he slammed on the drums while Jones shook his head, keeled over his bass nearby.

Kaleo’s true musical genius really shined when it played the only song sung in Icelandic during the show, "Vor í Vaglaskógi." Since the song is in another language, one could take a moment to focus on Julius Son’s voice as an instrument. Needless to say, he hones his vocal skills so fantastically that it can almost be guessed that "Vor í Vaglaskógi" is a song about the Icelandic countryside, as the melody is steeped in an icy, melancholy tone that resonates with eerie beauty. 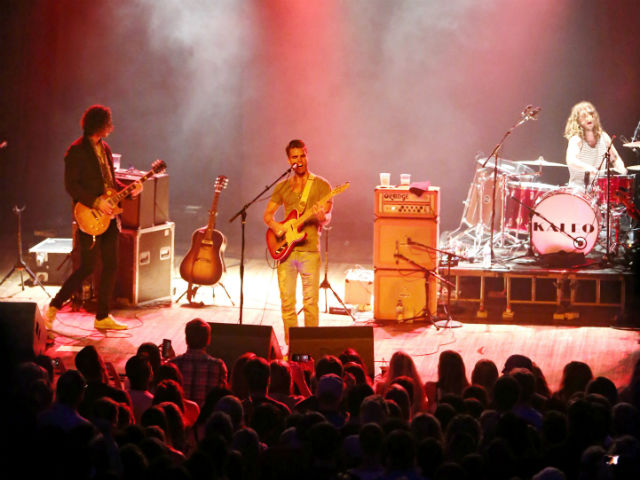 To top off their already impressive performance, the group covered Cher’s "Bang Bang" with the kind of soul that would have made the legendary power-ballad artist proud. The group had the crowd dancing all over the place. This made a perfect lead into Kaleo’s most famous track, "Way Down We Go," which left the previously rowdy crowd once again awestruck and silent as Julius Son’s intense voice executed every note of the nearly pitchy verses flawlessly.

Although some people began to file to the door after the band’s best-known hit, Kaleo raged on. "Glass House" could not even keep Crivello in his seat. The crowd cheered through the remainder of the performance and into a loud plea for an encore – which the band happily complied with, returning to the stage to play "Rock n Roller." The show ended with audible admiration from the crowd and much gratitude from the band members as they clapped back at their audience and waved goodnight as they left the stage.

While this was only the second time that Milwaukee has seen Kaleo, it surely will not be the last. Kaleo fans of all ages came from near and far to cheer on the band.

Alex Basler, 19, and a few friends traveled from the Chicago suburbs to see Kaleo’s performance. "I didn’t really know a lot of songs by (Kaleo) going into it, but I really, really enjoyed them," she said. "They were easy to listen to and it was just a good atmosphere."

The audience was definitely consisting of an older crowd, probably due to Kaleo’s classic rock influences. Concertgoer Russ Wright even admitted that his 56-year-old music taste impacted his appreciation for Kaleo. "(The show) was great," he said. "He has a little bit of Molly Hatchet in there and a little bit of Stevie Ray Vaughan in his voice. I’m also a big fan of 'Sons of Anarchy' and a lot of that music could have been in that, so the first time I heard it, I thought that we had to go see it."

Kaleo brought a performance packed with indisputable talent Wednesday night, but the band still has room to grow in the entertainment realm. While the quality of the music was off the charts, the band members were stiff figures on stage until halfway through the show – though Julius Son's unwavering stance helped shed further light on the weight of their music and the nature of Icelandic culture.

Having been around since early 2012, Kaleo has had its fair share of making or breaking it in the Icelandic music industry and is just now taking America’s music sphere by storm. With such talent, though, it simply amazes me that we did not hear of Kaleo’s sound sooner.