From the price of admission to the service's unique production, I found myself surprised in many ways by Kanye's Sunday Service performance at the Huntington Bank Pavilion. Here were the seven biggest ones.

I went into Kanye West’s hometown version of his infamous "Sunday Service" performances with little expectations. I knew I was in for a unique experience, which is a given anytime you share a music venue with Kanye, but other than watching a few YouTube clips from Kanye’s Sunday Service sets at Coachella, I didn’t quite know what I was in for. Would the day be a Kanye West concert? A morning at church? Something in the middle – and if so, what does that even entail?

As a self-dubbed Kanye West superfan, I’ve seen him perform more times than I can count. From his critically acclaimed "Glow In The Dark," "Yeezus" and "Saint Pablo" tours, to most recently his co-headlining set with Kid Cudi at Tyler The Creator’s Camp Flog Gnaw Carnival in Los Angeles, I will watch Kanye West perform as many times as my schedule and bank account will allow. Admittedly, though, my fandom has been more casual since his last tour, so I had the luxury of going into Sunday Service with limited knowledge of what I was about to experience.

From the price of admission to the service’s unique production, I found myself surprised in many ways by Kanye’s Sunday Service performance at the Huntington Bank Pavilion. Some surprises were great, a few left me relatively underwhelmed, but this past Sunday was definitely one that I won’t forget.

1. There was no stage

Chicago’s own is escorted to the performance circle for Sunday Service pic.twitter.com/IlqDEoQwfs — Dan Garcia (@TheDanGarcia) September 9, 2019

Like most, I learned about Kanye’s hometown Sunday Service on social media less than 24 hours before Kanye took the stage on Sunday. I say "took the stage" in a very liberal sense because, while the Huntington Bank Pavilion has a large stage for its lakefront concerts, Kanye decided to opt out of using the stage to perform. Rather, the "Jesus Walks" rapper and his huge gospel choir set up shop in the middle of the venue with fans circled around the performers.

While this was a unique choice and definitely made for a one-of-a-kind experience, I can’t remember the last time I’ve seen Kanye West on an actual stage. Last fall, I watched Kanye perform an entire concert for his Kids See Ghosts project with Kid Cudi in a clear shipping container suspended above a festival crowd. During Kanye’s last headlining tour, the "Saint Pablo Tour," he performed on a floating platform that moved throughout the biggest arenas in the country. Each performance is unlike the one before it, but I personally can’t wait to see Kanye return to an actual stage.

2. Chance The Rapper made a surprise appearance 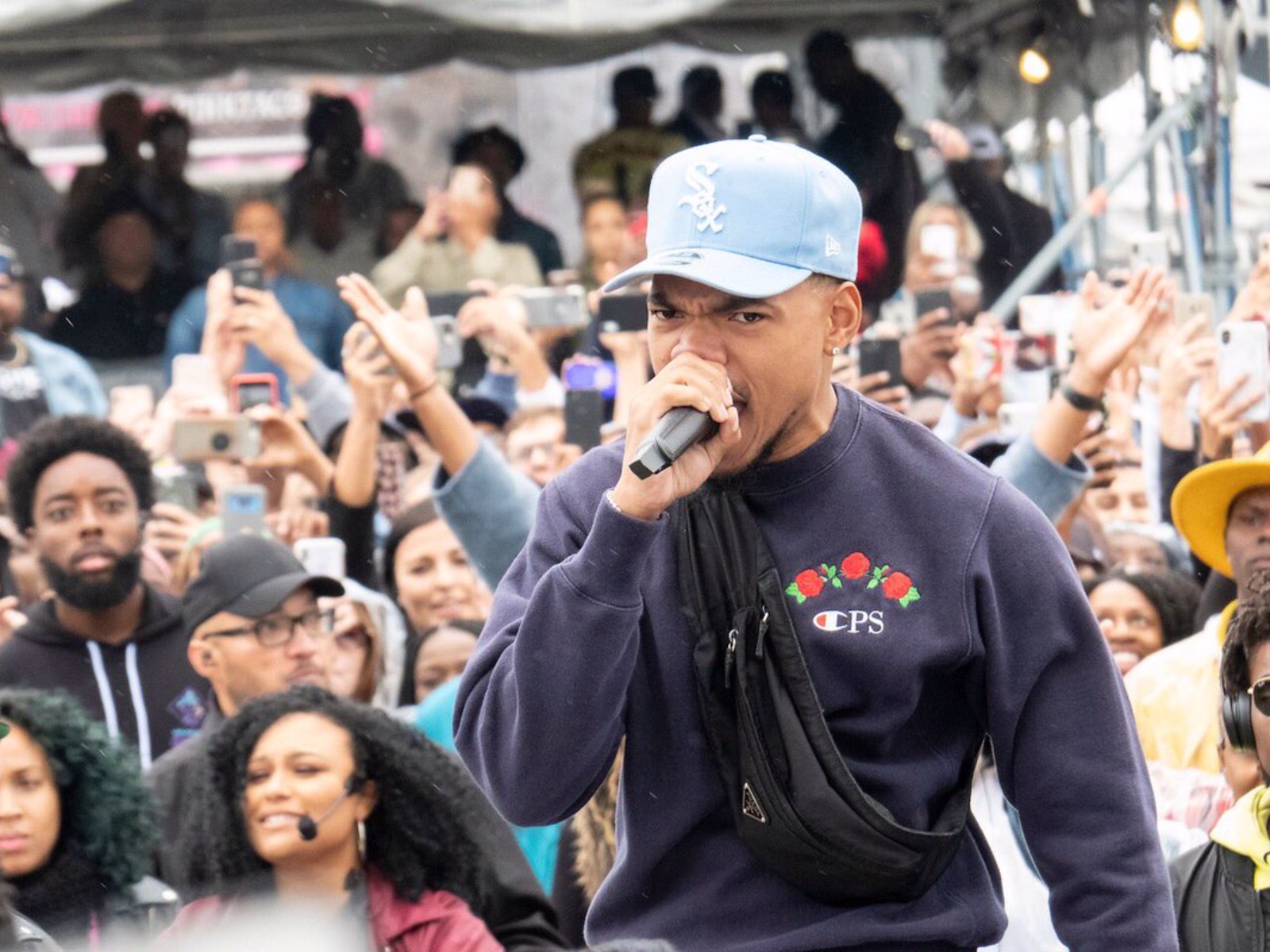 Kanye wasn’t the only big league Chicago rapper to bless the crowd at Sunday Service, as Chance the Rapper was escorted to the performance circle to perform his verse from Kanye’s 2016 track, "Ultralight Beam." Chance was met with a warm welcome, and one highlight from the morning was when he belted his "I met Kanye West, I’m never going to fail" line from the record. If you missed Chance’s surprise appearance on Sunday, fear not as the "Sunday Candy" rapper is bringing his upcoming tour to Fiserv Forum on Oct. 30.

3. The event was entirely free 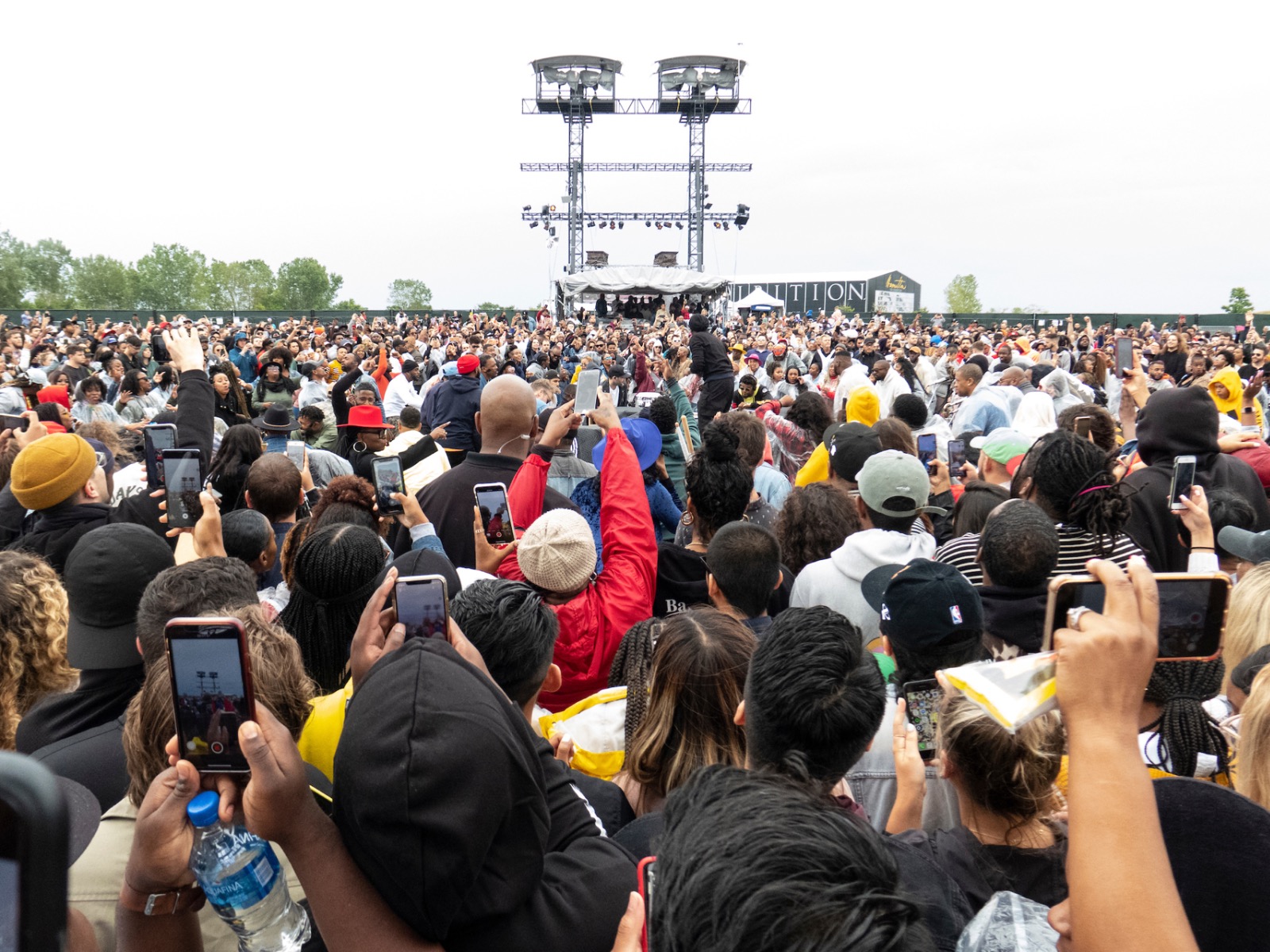 A special treat for those in attendance yesterday was that the event was entirely free. Although fans had to reserve tickets via Live Nation just a couple hours after the announcement (which sold out in minutes), with no collection plate, Kanye West’s Sunday Service was less expensive than your local church service. Considering Kanye booked one of the Windy City’s largest venues and flew out his massive gospel choir, yesterday’s production couldn’t have come cheap, which makes the low cost of admission especially surprising.

One of the only underwhelming surprises from the morning was that Kanye West’s mic time was very limited during Sunday Service. If you went into the day expecting a Kanye concert, you may have been disappointed, because the day was more of a church service than a music concert. Kanye didn’t share many words with his hometown crowd, and his only musical number came with a memorable performance of his hit single "Jesus Walks," an appropriate selection for the service. While several other gospel versions of Kanye songs were performed by the choir throughout the morning, Kanye West mostly sat on the sidelines during the renditions.

5. The choir put a gospel spin on a Nelly Furtado song 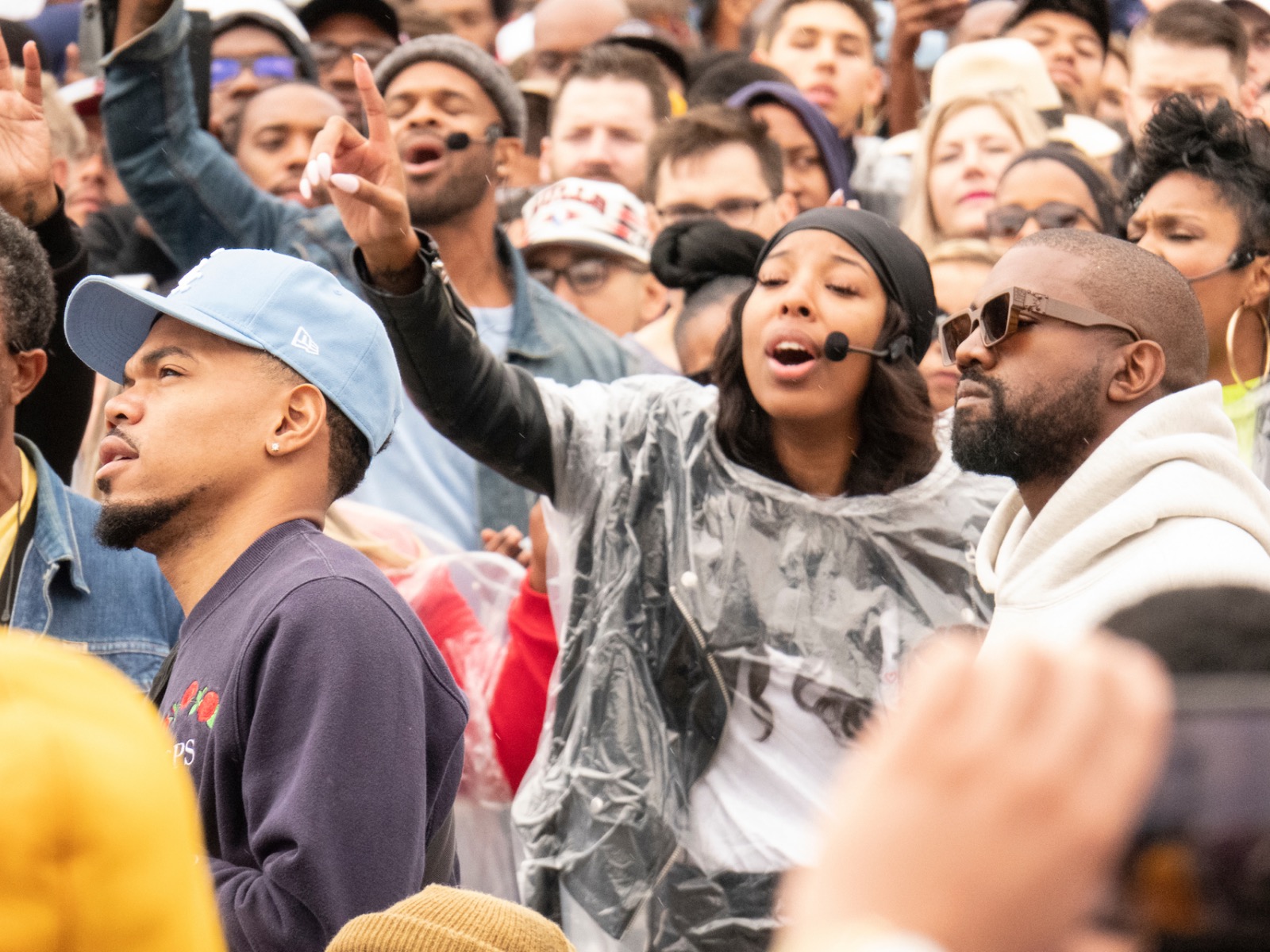 Kanye West songs weren’t the only ones to receive a gospel remix on Sunday, as the choir put a religious twist on Nelly Furtado’s "I’m Like A Bird." The Sunday Service version changed the lyrics to from "I’m like a bird" to "trust the living word," and was an entirely unexpected cover for a Kanye West event. Maybe they’ll cover her song "Promiscuous" next time. 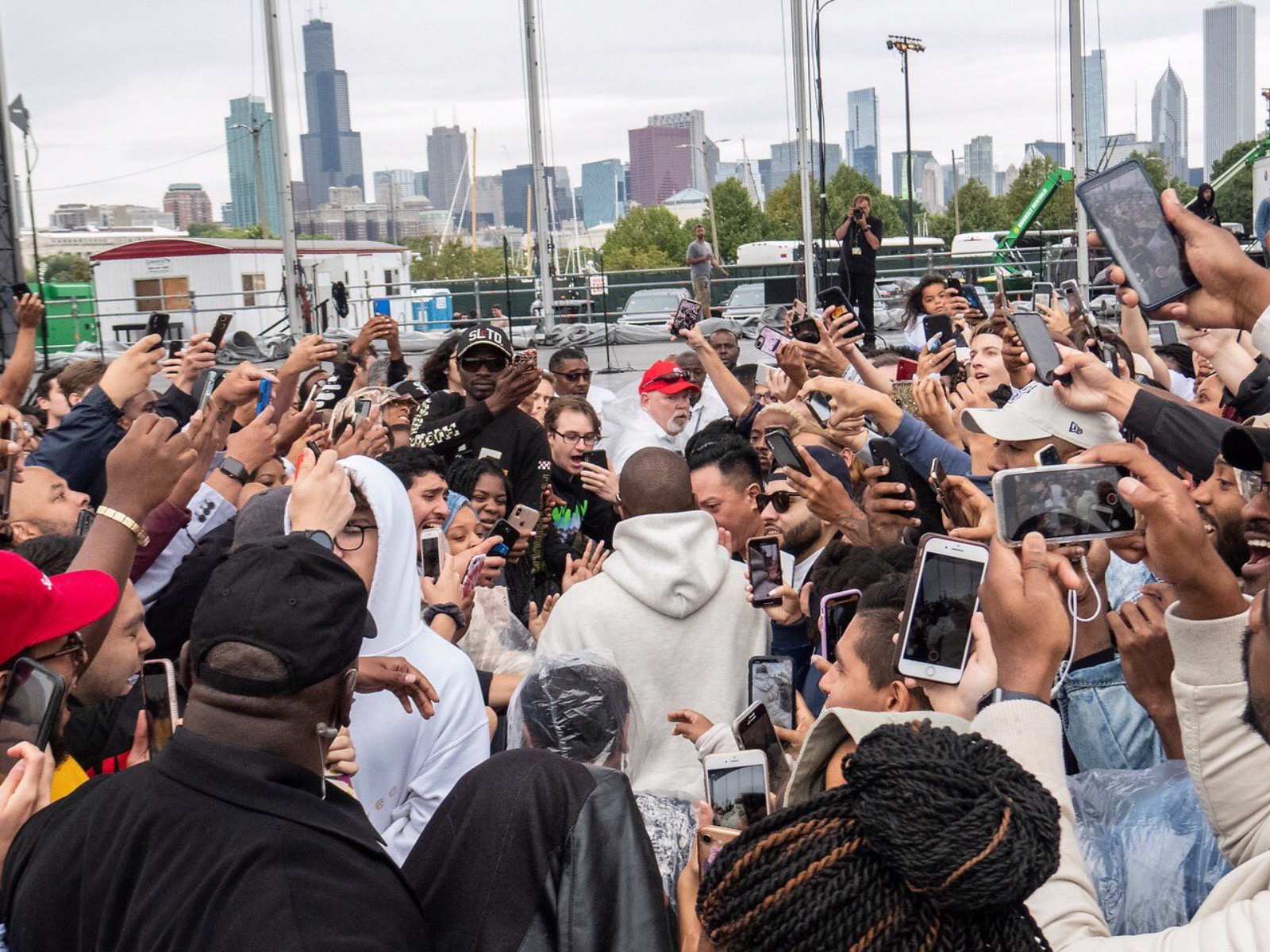 With limited barricades and members of security to protect Kanye, Chance and the choir, the Sunday Service set-up looks like a liability and security nightmare on the surface. However, with fans feeling the holy spirit, the service went surprisingly smooth with no unruly fans attempting to make headlines.

Even as it was time for Kanye to exit the performance circle, the rapper and a lone member of his security team parted the sea of fans to exit the crowd. Even though Kanye is one of the biggest and most recognizable names in the world, when he’s back home in Chicago, he’s one of us (but with a few extra zeros in his bank account).

7. Fans were back home by the afternoon 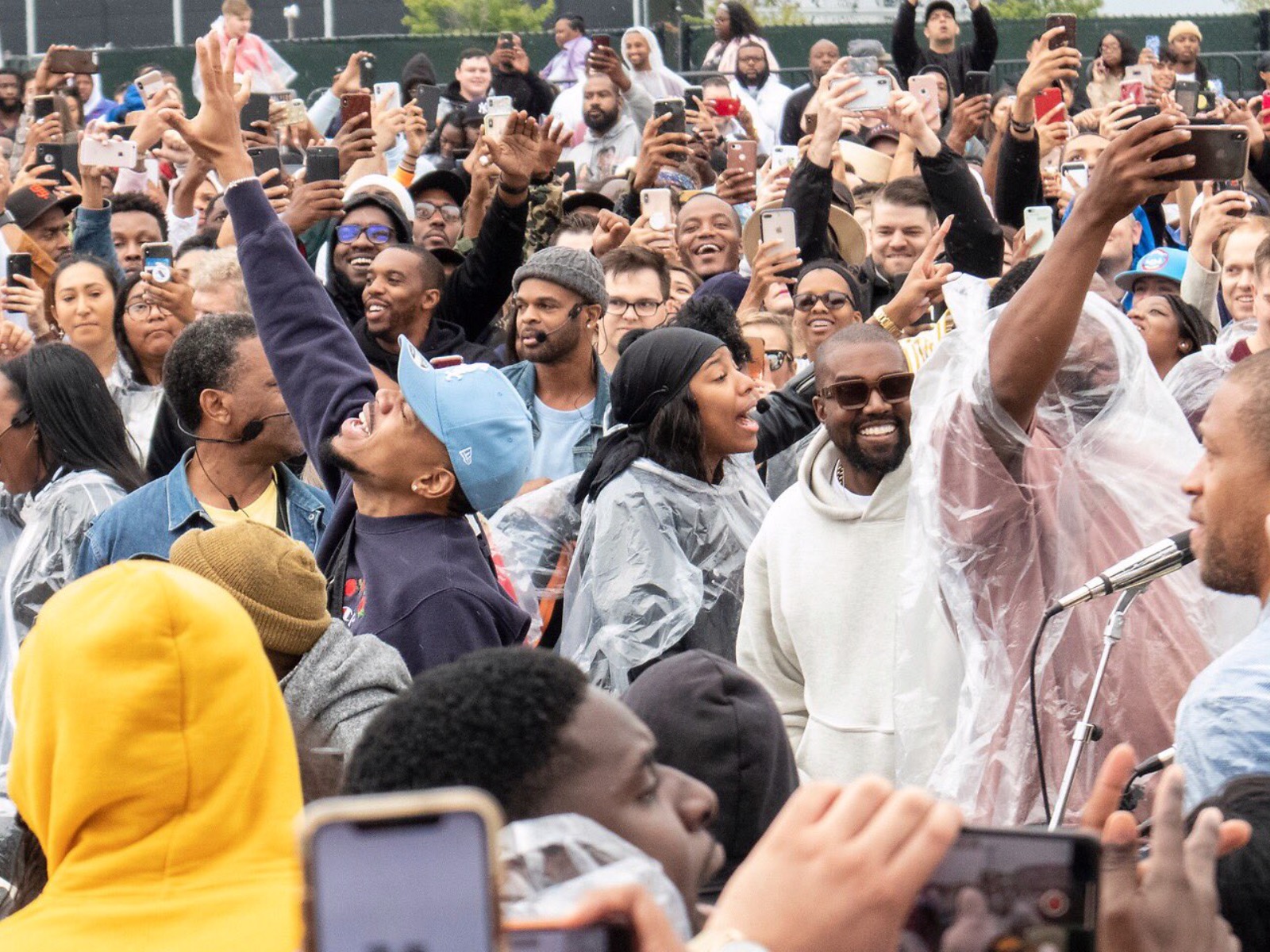 When else can you see one of the biggest artists in music perform and be on your way home before lunchtime? With the 9 a.m. service starting close to the scheduled start time, fans were exiting the venue by 10:30 a.m. It’s not often that I line up for a performance at 6 a.m.; however, having the rest of my Sunday ahead of me after an already epic day was a real treat. Some fans celebrated the day with brunch and bloodys, others with naps. But everyone at Chicago’s Sunday Service had a blessed day.

This month in live music: Who's hitting Milwaukee stages in September