I last saw Keith Urban in 2015 at Summerfest.

Here’s how I began that review, "It's hard to define today's country music. It's without a doubt the nation's soundtrack, but it shies away from a standard set list as it's a true blend of pop, rock, roots, blues and – of course – traditional country. Keith Urban, though, is both none and a little of all the above. He's a coined country New Zealand-made global guitar hero who – at the age of 47 – is hitting a stride that makes him one of music's best, most authentic performers."

Tonight at the BMO Harris Bradley Center, and days after country music celebrated 50 years of its prestigious CMA Awards, Urban, 49, came back to Milwaukee bringing his "Ripcord Tour," a new set songs and a forward looking mentality that’s helped him remain a big country star while consistently gaining new audiences across all genres.

The 23-song set was crisp, collected and just flat-out killer.

Here are my five key takeaways:

While this tour is big, the set’s simple. And, that’s OK. No flying, rolling images, fireworks, and pomp for the sake of pomp. It’s just Keith Urban and his band – bass player Jerry Flowers, guitarist Danny Rader, Nathan Barlowe on keyboard and guitar, and drummer Seth Rausch. Five guys on stage playing music. Sure there was a huge screen, confetti and lights but more music than show and that just works.

Opener and CMA New Artist of the Year, Maren Morris, was awesome in her opening set. Clearly "80s Mercedes" and "My Church" have propelled her onto the stardom track. She joined Urban for "We Were Us," playing the role of Miranda Lambert, who does the duet on Urban’s "Fuse" release. Morris owned the song making no one in the crowd miss the potential of a piped in part from Lambert. The song was beautifully done, and better with Morris’ vocals. 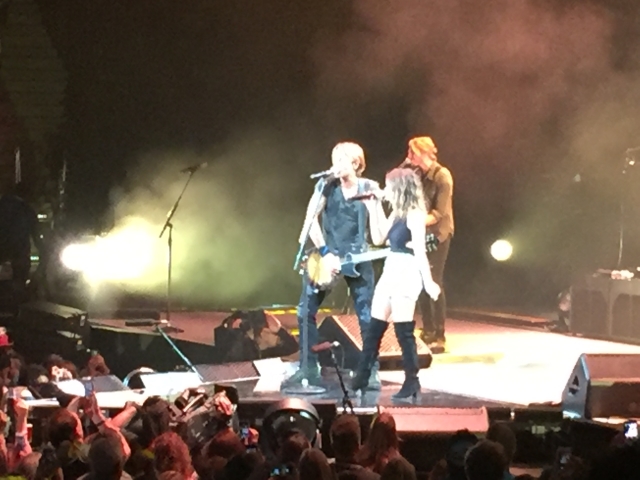 3. Storytelling works, and "Cop Car" is a great song

I’ve always loved "Cop Car," a song written by Zach Crowell, Sam Hunt and Matt Jenkins. It was released by Urban as the fourth single from "Fuse." It tells a fun story and fit perfectly into a set that was heavy on the strong storytelling tunes from Urban’s latest release.

4. Haters gonna hate, but I love country music and it's OK that it's a bit poppy

I write this and preach it regularly, but I love country music because – for the most part its fans, of all ages – are fans of the entire genre. A genre that’s ever evolving and welcoming to new audiences. If you like Garth, you like Keith. Eric? Yep, Cole rocks, too. Sure, it’s commercial and the artists want wide reach and success. Don’t we all? But, it's honest, fun and doesn't take itself too seriously.

And, quit complaining that country has become "too pop." Who cares? Sure, Urban's style isn't pure country, but it's rooted there and in rock and pop. That's just fine. Urban was one of the first to "not wear the hat," but the Cowboy hat has never defined the music - the person does. Urban’s entertaining into another decade, and he’s embraced the traditions of country music while driving it into new territories with each new song he sings. He proved this and more Friday night in Milwaukee. He even hung around, thanked fans after his set, signed autographs and even gave a mini speech after his encore that toasted fans who made the choice to come to his show on Friday night.

Hats off to Kerry Wolfe, senior VP of programming for iHeartMedia Milwaukee, and his team at FM 106. The station, even in this age of digital and XM, is still a powerhouse. Need proof? Wolfe basically – just by asking – changed the tour's standard set list Friday night getting Urban to add "Making Memories of Us" to the encore. Urban gave Wolfe a shout-out before and after the song, saying "this one's for Kerry, 'cause he asked." So cool.

Thanks for another great show, Keith. See you next time, and have a good show tonight in Minneapolis.