The vibes were alive and well at Lamar's swift Summerfest set

During his Amphitheater performance Wednesday night, Kendrick Lamar noted the last time he was here, "the energy was so motherf*ckin' loud," and if that was a 10, he wanted this show to hit a 12. Well, it certainly felt like a 12, with the packed crowd bobbing their heads, swaying their arms and just generally going crazy for every verse. And even though it barely lasted 60 minutes, Lamar's vigorous fireball of a set gave them plenty to go crazy about.

Around the midway point of Kendrick Lamar’s Marcus Amphitheater set Wednesday night, the Compton-repping rapper busted out "B*tch, Don’t Kill My Vibe," a plea off of his breakout second album "good kid m.A.A.d city" to, in fact, please don’t kill his vibe – a chorus which the Amp crowd happily joined in on.

It was far from the only time, however, Lamar concerned himself with the vibes and energy of his audience. Constantly throughout the show, Lamar checked in on the crowd, repeatedly walking from the left side of the stage, to the right and then finally to the center to amp up the crowd and urge the respective sections to cheer, go nuts and compete with one another. He noted the last time he was here – all the way back in 2012 at The Rave – "the energy was so motherf*ckin’ loud," and if that was a 10, he wanted Wednesday night’s show to hit a 12.

Well, it certainly felt like a 12, with the packed, almost capacity crowd bobbing their heads, swaying and bopping their arms, lighting up their cell phone lights and just generally going crazy for every single verse at the Amphitheater. And even though it barely lasted 60 minutes, Lamar’s vigorously energetic fireball of a set gave them plenty to go crazy about. 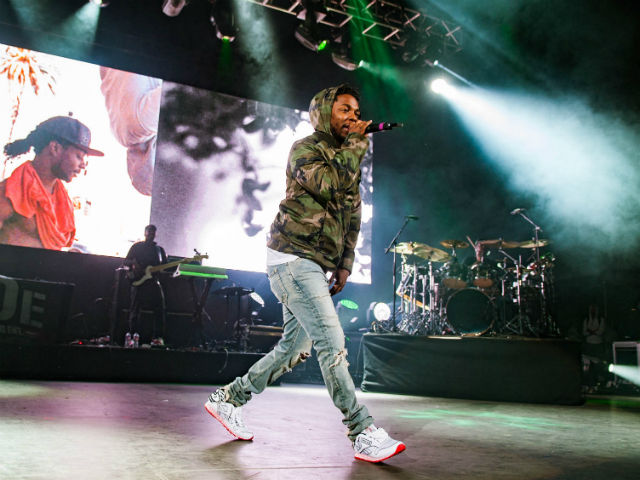 In the last several years, Kendrick Lamar – with his bitingly honest, introspective verses and slightly growled voice – has firmly landed himself in the conversation concerning today’s best rappers. Though his second album after "Section.80," "good kid m.A.A.d city" announced Lamar as a voice to be reckoned with, earning him several Grammy nominations in 2014 – including one for Album of the Year (both he and new BFF Taylor Swift lost to Daft Punk).

Then earlier this year, his follow-up "To Pimp A Butterfly" revealed even more fascinatingly complicated and conflicted thoughts on race, rap and himself – not to mention new sounds, taking overt inspiration everything from jazz to funk to slam poetry. The album received plenty of critical praise – though perhaps Lamar’s most glowing endorsement comes accidentally from Fox News’s Geraldo Rivera, who, after the rapper’s opening performance of "Alright" Sunday night at the BET Awards, recently claimed in outrage that Lamar and hip hop in general "have done more damage to young African Americans than racism in recent years." After all, if your artistic expression is getting Fox News in a huff, you’re probably doing something right.

After a short collection of evocative film clips featuring Compton – a man galloping a horse down a street, for instance – Lamar opened the show with "Money Trees," sending the crowd into a frenzy and drawing a brief grin from the performer. The audio mix came through strong, the vocals not washed out by the five-piece backing band that amped up almost all of the tracks to rocking levels. That energy kept going straight into the crowd-pleasing hit "Backseat Freestyle" and the ferocious second half of "m.A.A.d City" that got the entire Amphitheater audience bobbing its arms to the beat.

The loud, electric energy kept moving into "Swimming Pools (Drank)," a cover of A$AP Rocky’s "F*ckin’ Problems" and "B*tch, Don’t Kill My Vibe" – all the while snippets of life in Compton, vividly captured, continued to play on the long video screen behind Lamar and the band.

While much of the evening seemed set to rock, "Poetic Justice" brought out some of the R&B and jazz influences that grew out on "To Pimp a Butterfly." The song was still served up as a banger, but the smooth R&B vibe was there, fueling the song from the background. Then, after a quick red-clouded detour into 2Pac’s "Hail Mary," Lamar hopped back to his own material with the vigorous and urgently performed first half of "m.A.A.d City" before bringing things down with "Sing About Me, I’m Dying of Thirst." Funeral hall imagery filled the screen behind Lamar, and all the stage lights went dark – but all of the cell phone lights went on, hauntingly glowing the stage just enough. The sad song served as the lone slowdown in an otherwise propulsive set, burning through material.

There was certainly some material missing in action up to this point, however: "To Pimp a Butterfly." On previous stops, he’s baffled audiences with performing only one of his new songs – "Alright" – leading some to question if his perfectionism is keeping the material off the stage for the time being or some other unknown motive.

Maybe Milwaukee should consider itself lucky then that Lamar ended his Summerfest set with not just one, but four tracks off of the new album. After an odd awkward pause – perhaps even the backing band wasn’t even expecting new stuff – Lamar busted out the colorfully funky hit "i," as well as the equally funky rock groove of "King Kunta." He then closed out the early night with "Alright," before returning briefly for an encore dabbling in "Hood Politics" and "A.D.H.D." 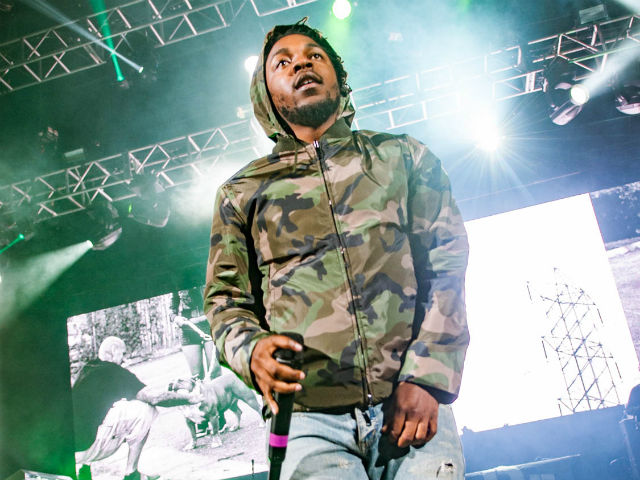 The whole set – encore included – came out to just about 60 minutes, and while it was a packed hour, it was still just that: an hour. Plus, it’s hard not to want more of "To Pimp a Butterfly." There’s an absolutely killer show to be had featuring Lamar performing straight through the thematically complex and musically adventurous entirety of his latest lauded record. That potentially great tour, however, has yet to be seen – last night in Milwaukee or reportedly anywhere else. I guess it’s not ready yet.

Perhaps that will be on the menu for Lamar’s return to Milwaukee. After all, he closed out his otherwise strong Summerfest show by reiterating multiple times to the voracious crowd that he will be back. And I imagine when that happens, most if not all from Wednesday night will be back too – with strong and healthy vibes well intact.

ScHoolboy Q opened the show up for Kendrick, getting the crowd up and out of their chairs quickly with a repertoire of strong jams and chill beats. Perhaps more engaging and entertaining than his songs, however, was his stage presence and crowd interactions. He seemed utterly relaxed, sharing amusing asides about his reaction to his two recent Grammy nominations ("Ya’ll know I didn’t go to that sh*t"), making fun of Lamar’s height, talking about his new record coming out "whenever I feel like dropping that" and playfully noting that he hates his own song "Studio" now. Whether rapping or just chatting with the audience, he worked himself into a much appreciated sweaty lather.