Though Kenny Baldwin was a drummer with local bands like Colour Radio and Locate Your Lips, he was most influential behind the scenes at his family's club, The Starship, and for his many years of production work at Summerfest. Beloved by everyone who knew him, Baldwin lost a long battle with cancer on Friday.

Though Kenny Baldwin was a drummer with local bands like Colour Radio and Locate Your Lips, he was most influential behind the scenes at his family's club, The Starship, and for his many years of production work at Summerfest. Beloved by everyone who knew him, Baldwin lost a long battle with cancer on Friday.

On Thursday, his long-time friend and former bandmate Wiley Nash reported to a large group of friends that Baldwin's lung cancer, which was in remission, had returned and Baldwin, 62, was in the hospital. Doctors, he wrote, gave Kenny a year to live. Dozens of well-wishers sent messages and made plans to visit Baldwin in the hospital.

But a day later, the same message thread carried this message from Nash (aka Patrick Nedobeck):

"Kenny left us around 10 p.m. this evening. His dear friend Kendra and his cousin Clarence were at his side. Love to all."

By the following day, groups of Baldwin's friends were meeting up to celebrate the life of one of the most influential members of the local music scene.

At the urging of the late Presley Haskel (aka Jerome Brish), Baldwin, who studied jazz drumming, convinced his dad to let him book rock and roll bands into the family's Downtown disco, Starship Encounters, on 5th Street, near Wisconsin Avenue.

The result was a short-lived venue – re-christened The Starship – that breathed life into Milwaukee's punk and new wave scene and, in effect, started a musical chain reaction that survives today.

Though the club lasted but two years, Baldwin's influence endures decades later thanks, surely, to the effect of The Starship but also for Baldwin's years as a soundman, working in local clubs like Tony Selig's Omnibus at the Eagles Club, and working in production at Summerfest, where he encountered a couple generations of Milwaukee bands as a stage manager. 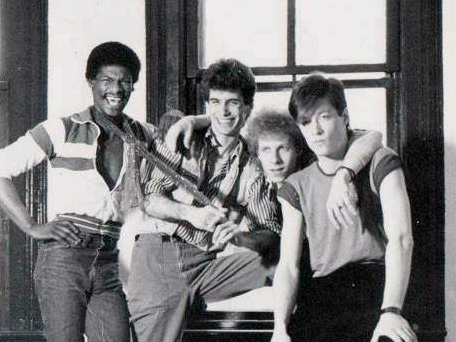 He also served as drummer of Brew City technopop outfit Colour Radio (pictured above), which inked a deal and released an album on A&M Records subsidiary Gold Mountain in 1983. He was also a member of Locate Your Lips and The Prosecutors.

When I wrote the above-linked post about The Starship last spring, Rich Mars invited me to talk about it on his WMSE show. Stepping out of line, I took the liberty of inviting Kenny as a surprise guest. The result was a great on-air chat about The Starship that you can hear here.

Alas, we should've had tape rolling in the studio while the music played because Kenny shared so much more about those days with Rich and I. Afterward, walking outside, Kenny and I spent another half-hour on the Milwaukee Street sidewalk talking.

He told me he was feeling good. He told me he was happy that his dad had understood, before his passing not long ago, what an influential club The Starship was. He was eager to see the results of a documentary film and a book about the Milwaukee scene during those years. He smiled a lot, as always.

Though he didn't live in the past, and was as modest a guy as you'd ever meet – and would never take credit – he understood, I think, what he had helped spark here and how long the reach of The Starship has been.