This week's All-Star is Kent Knapp: father of 6, husband for 25 years and friend to many. He's also a musician, the Milwaukee Blacksmith and deeply committed to living and supporting Milwaukee - particularly his beloved Bay View. 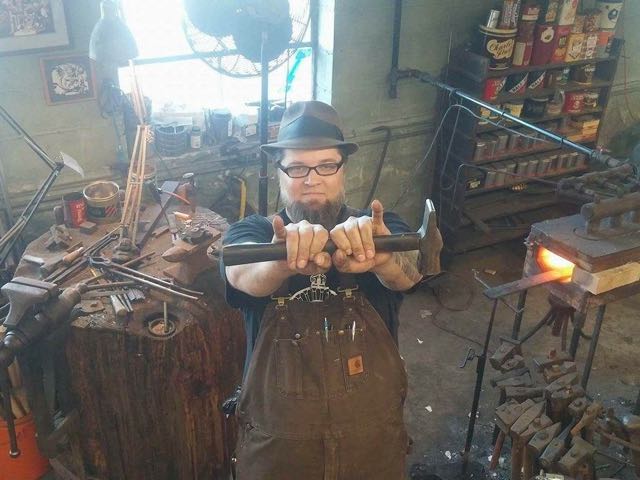 OnMilwaukee / Too Much Metal: how long have you been doing what you do?

Kent Knapp: I started blacksmithing in 1991 and apprenticed for seven years under two different masters. After an eight-year hiatus in New Orleans playing music, I returned to Milwaukee and shortly thereafter opened my own shop.

I am currently the lead blacksmith at Milwaukee Blacksmith, Inc. We are a family business with myself and three sons, Miles, Birdie and Ozzie, in the shop. My eldest daughter, Zoey, does design work. And my missus of 25 years, Shannon, does the books and promo in between wrangling the two youngest, Dharma and Tashi. We offer custom ironwork, as well as stock items and also provide classes in beginning blacksmithing at the School of Iron.

OnMilwaukee / Too Much Metal: What is your favorite Milwaukee season?

Knapp: Summertime is, hands down, my favorite time in Milwaukee. The festivals, beer gardens, outdoor concert venues, block parties, etc., offer so much to do in this great place on a Great Lake. Winter time, on the other hand, often sees me high-tailing it to the Virgin Islands, when finances allow. Ironically, there are many Brew Town expats down around those parts.

OnMilwaukee / Too Much Metal: Favorite or least favorite Milwaukee smell?

Knapp: Ahhhhhh, smells; so many to be had in this fair city. Let's start with the good, shall we? Coming over the north side of the Hoan during the many festivals held at Henry Maier Park yields a lovely aroma of grilled brats, Italians and Polish. Coffee being roasted all about the city is an instant wake up. The aromas of hops and barley pouring out of our many fine breweries make anybody want to tip one back. And for me, personally, nothing beats the smell of coal smoke in the morning. Smells like work!

And then there's the bad. Only two, that I can think of: dead alewives on the north end of Bradford Beach and the "poo poo plant" when coming over the south side of the Hoan. Phew! That's ripe! Hoof hearted?!

OnMilwaukee / Too Much Metal: What is your hope for Milwaukee?

Knapp: My hope for Milwaukee is that she can once again become the pillar of production she once was. "Milwaukee feeds and supplies the world" is no myth. Our port used to see over 300 ships a year; now, barely 30. I have high hopes for the many small business entrepreneurs coming out of the woodwork, not to mention the water technology folks who have their sights set on us. Now THERE'S something.

OnMilwaukee / Too Much Metal: When and how did you fall in love with Milwaukee?

Knapp: Being born and raised in Milwaukee helped when it comes to loving her, being a sixth generation Milwaukeean helps, but it wasn't until I left and came back that I really realized my love for this old gal. After playing music in New Orleans, I returned to Milwaukee with a newfound love for her. Studying her history and ironwork just set it deeper. I have traveled all over this fair country and few cities have the culture, architecture and arts we have here. Let's not take them for granted.

Knapp: Pure labor of love. Being a 21st century blacksmith isn't easy; not everyone understands what I do and how it differs from the "ironwork" you purchase for $29.95 at the big box store. I persevere because Lady Milwaukee pushes me to. Most aren't aware, but Milwaukee was home to, arguably, the greatest American blacksmith. Cyril Colnik – Google him – came here in 1894 and never looked back. Going on to produce ironwork commissions for the likes of Pabst, Uihlein, Schlitz, Pritzlaff and Gallun, Colnik made this "German Athens" his very own canvas. It's hard to drive a block in "Old Milwaukee" without seeing his work. He single-handedly drives me to be a blacksmith and leave my mark on our town.

OnMilwaukee / Too Much Metal: What's your guilty pleasure?

Knapp: My guilty pleasure? Cheeseburger and a malted at the Nite Owl! Looks like I'll be waiting til spring to scratch that itch.

OnMilwaukee / Too Much Metal: Name a Milwaukeean you would like to high five.

Knapp: Just one?! Whoa. That's tough. I mean, the list is extensive. This is gonna be hard.

OK, after much deliberation, I'm gonna have to go with Tom Crawford. TC has been doing what he does for so long at WMSE that it's hard to imagine the local music scene without him. I first met TC in 1991 when I began a long relationship with the station and Tom, promoting my bands, and subsequently the blacksmith shop. TC has tirelessly held his post and never backs down when it comes to pushing our brand: Milwaukee! High five, TC.

OnMilwaukee / Too Much Metal: What side of town do you live on?

Knapp: It took me what feels like a lifetime to find my home in Milwaukee. I was born and raised on the North Side, with stints in Riverwest, the East Side, South Side and wherever they would let me in. But I've finally settled in Bay View with my family of eight. I can truly say that if I ever leave this hood it will be either in a wooden box or a ship bound for the islands, never to return. The restaurants, the bars, the galleries, the parks, the music, but most of all: the people. What a great bunch of misfits. Can't go a block without seeing someone I know. Getting close to being the Mayor of Bay View. Look out, Firle!