As part of its new season of technique and innovation, Milwaukee Art Museum is running a trio of exhibits more or less simultaneously. While all three feature beautiful and important work, it's not hard to see why the museum's director Marcelle Polednik calls the monumental "William Kentridge: More Sweetly Play the Dance" the "jewel in the crown."

As part of its new season of technique and innovation, Milwaukee Art Museum is running a trio of exhibits more or less simultaneously. While all three feature beautiful and important work, it’s not hard to see why the museum’s director Marcelle Polednik calls the monumental "William Kentridge: More Sweetly Play the Dance" the "jewel in the crown."

The sweeping multimedia installation fills the Baker/Rowland Galleries in the Santiago Calatrava-designed Quadracci Pavilion and it’s not only the first time the gallery is housing a single work of art, it’s also the first time an exhibition uses the entire gallery without any interior walls.

The William Kentridge show opening this week is like nothing else you’ve seen at @MilwaukeeArt Museum. pic.twitter.com/lGjzNycypr — Bobby Tanzilo (@BobbyOnMKEcom) June 20, 2018

"William Kentridge is among the most important living artists working today, and we are proud to be able to share his work with Milwaukee," says Margaret Andera, the museum’s interim chief curator and curator of contemporary art.

"Whether visitors are drawn to the captivating figures in silhouette, the skill with which Kentridge combines various media into one monumentally singular work or the audacious scope and scale of the installation, I believe they are going to be mesmerized by this work."

Of course it’s not simply the impressive breadth of the work that impresses, it is the timeless relevance, says Andera.

"When you look at any work by William Kentridge, it starts with (his native) Johannesburg," she says. "It starts with that idea of inequality and injustice, but the brilliance of William Kentridge's work is that it starts there in those very specific places, but he has a unique ability to connect that experience across time and across cultures. 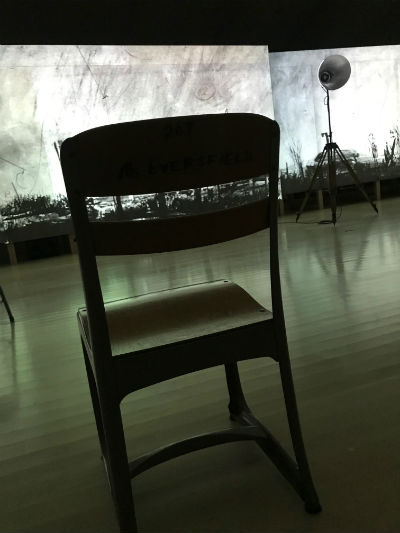 "And so, while he's starting from this very specific experience, his work is a commentary on things that unite us. That is, the human condition, and so, you can look at this piece that was done in 2015 and you can see things that are incredibly timely for the very moment, the very day, we are standing in this gala even though it was done in 2015, and you know what? If we would be watching this 10 years from now, a curator could be standing here and saying that exact same thing. That's the brilliance of William Kentridge's work."

Taking a cue from the dance macabre, that oldest allegory of mortality, Kentridge parades a stunning variety of figures across the eight screens that comprise the installation.

There’s a brass band, patients walking with their IV bags, South African dancers, ballet dancers, people pulling corpses, figures holding aloft images of birds and fronds and classical busts and cages, and on and on ... from one end of the room all the way to the other, these figures and others form an unexpected procession.

All the while, keep an eye tuned to the stark grey and white background, which is constantly changing thanks to its stop-motion medium, tracing a contrapuntal rhythm against that of the figures that parade before it.

The #WilliamKentridge #multimedia #installation opening this week is like nothing else you’ve seen at @milwaukeeart Museum. I find the changes in the #stopmotion #background especially mesmerizing.

"Johannesburg is the beginning and the end of Kentridge's work, so are his drawings, and the consistent star of any William Kentridge artwork is the Johannesburg landscape that has been scorched from mining," says Andera. "It is not a beautiful landscape and he doesn't try to dress it up.

"So, what you're seeing here is a landscape based on Johannesburg, and if you look at any other Kentridge's drawings, any other of his works, the landscape is always similar. These are charcoal drawings, and the stop-motion animation, the way that the background of the film seems to be moving at a different pace from the live action figures that are progressing, the way he does those is he's making these drawings. He photographs them. He erases and changes them, photographs them again."

That landscape is more than simply a stark backdrop for the procession, says Andera. It’s a key to understanding the installation. 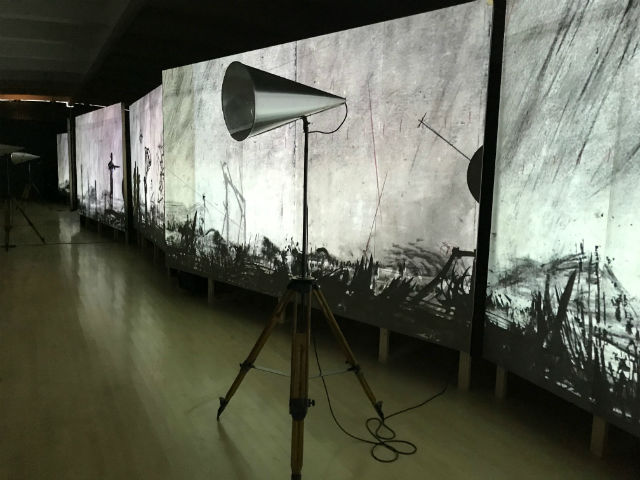 "There is an equivalence in Kentridge's work where he equates what happened when a landscape gets used up or abused and the human condition, what happens when mass numbers of people are subjected to inequalities. That is a yin and yang with Kentridge always."

Mortality is a thread that runs through Kentridge’s work and it’s something that struck me about another of his works, one I saw years ago in an exhibition at the Museum of Contemporary Art in Chicago.

Called "Her Absence Filled the World," the work was a similarly stark sketch of a figure alone atop a hill. It spoke of loss, of grieving and I couldn’t get it out of my head as I watched the march taking place in "More Sweetly Play the Dance."

"What he's doing is he's documenting change," says Andera. "He's also documenting memory and when you think about it, that in connection with an artist who is so consciously reaching back into time to tell present day people how things have and have not changed, that's a really not so subtle kind of link through Kentridge's works."

The other exhibitions in this season of technique and innovation are "Photographing Nature’s Cathedrals: Carleton E. Watkins, Eadweard Muybridge and H. H. Bennett," which runs through Aug. 26, and "Daring Technique: Goya and the Art of Etching," which closes on Sept. 9.